The Best Boy In New Brunswick! 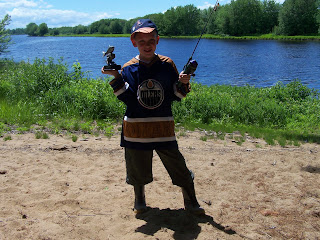 We're having a great time down East in Chipman,New Brunswick so far this summer,and this past week-end was no exception! I'm very pleased to announce that Tyler Northrup,my grand-son and myself,Dale Bauer,won the 16th Annual Chipman fish and game Fishing Derby this past Saturday.This year I mentored Ty and a friend from Doaktown named Ameliea Vienneau,and we were lucky enough to win the catagory for most weight registered per team. There were some great prizes for the kids and adults alike.And don't forget the free hot-dogs and pop and chips! It was a beautiful day for the tournament and a good time was had by all!The Chipman Fish and Game is to be commended for their hard work and dedication to promoting the sporting life to the younger generation. We are done bear hunting and we were very suprised at the number of large boars that were hitting our baits.Kenney took a young bear that was causing some walkers and joggers some distress out of circulation,but other than that,we will be keeping tabs on some really nice one's for future hunts. The run of sea-run brook trout up the Cains River this year was nothing short of phenomonal! Many long-time fishermen like John S.,who took a 19 incher that weighed 4.25 lbs. and Leonard P.who took several over 16in. have all said the fishing is the best they have ever seen! The Cains River is living proof that conservation does indeed work! The bright salmon are just starting and the pickerel fishing is just starting to heat up,so get up off your duff and get out there in the Great Outdoors for some fun in the sun!
at June 18, 2007 No comments:

How Big Is He? 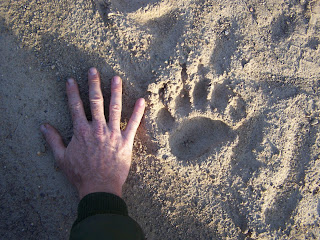 Ken Hargrove has big hands! This bear track at one of our baits has been causing lots of chatter! And rightly so! This big ol' boar has been hitting one of our baits for about two weeks now. We have been guessing his weight based on the size of his track,but last night while baiting ,we got a good look at him,and he's a nice bear! Ken puts him at 350-375 lbs. and I say 350lbs. It will be interesting to find out what he actually weighs. We have been really busy the last week,checking baits and getting stands ready for the bear hunt. What a beautiful time of the year to be in the woods! We are seeing very good numbers of game and most species are in the process of raising their young. This makes for some great sightings of mammals and birds interacting with their new-born offspring. It never ceases to amaze me how protective the mothers are. Everyone knows you are not supposed to get between a sow bear and her cubs,but how many of you know that it can be down-right dangerous to get between a mother partridge and its little ones! I once took a fellow in to the mouth of McKeen Brook fishing and on the way out we encountered a partridge and a flock of small ones. My companion was in the lead and when the partridge saw him, it went right into attack mode! It fluffed right up and started to strut towards him and he just kept walking towards it .I told him he might want to go out arround it,but he just laughed and carried on.All of a sudden that bird was flying right up into his face and grabbing onto him.Well sir,he turned and was running and screaming down that old logging road just frothing the air with his fishing rod trying to fend off the attacking partridge! I never laughed so hard in all my life! The tears were coming down my cheeks! My companion finally untangled himself and returned with a sheepish grin on his face with only a few scratches to show for such a vicious attack! Mother Nature teaches some pretty stern lessons sometimes and my fishing buddy certainly learned one that day! The trout are running and the white perch are coming soon,so we are going to be really busy,but not busy enough that we can't find some time for new friends and sports that come up for a visit.See you soon!
at June 04, 2007 No comments: