This month has been a great one to be outdoors here at home on Salmon River and the mighty Miramichi River. Both of these rivers are starting to heat up with new runs of fish of various species arriving daily. There are runs of gaspereau that have been going for weeks now in Salmon River and the Shad have started, as well as the white perch The trout have started to run in both rivers and that is what a lot of fishermen have been waiting for,myself included. I usually like to float a stretch of river and try to intercept the run. If your timing is right,you might get some fiddleheads to go along with your trout. Speaking of timing,if you're real lucky, you may even intercept some Rockey Brook salmon running up late in May with the sea trout in the Miramichi River. As of late, fishermen in the lower stretch of the Miramichi have been catching a lot of striped bass while fishing for trout.
My good friend, Allen Davidson and I, floated the Miramichi River on Saturday,May 26 from Carroll's Crossing to Doaktown looking for some fiddleheads and sea trout and we were not disappointed. It was a beautiful day to be on the water and Allen was into the fiddleheads before we could cast a line! The following photo shows Allen filling his hat getting ready to take a load back to the boat. 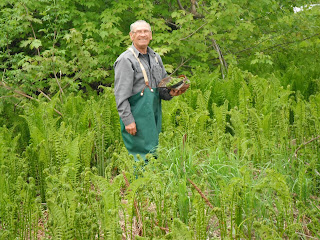 Although the big sea trout in the three to five lb. range get all the attention in the Miramichi and its tributaries,there are runs of smaller trout in the ten to twelve in. range that are plentiful and feisty and eager to take a fly. This is the size trout Allen and I caught on our trip down the river. It took us a while to figure out where the trout were and what they were taking but after we figured that out,we got into a lot of trout in the 10-12 inch range. The trout seemed to be taking in the rapids rather than the pools and after trying a variety of streamer patterns,we got them to take a small white elk hair caddis. We were getting hits on nearly every cast after we figured out what was going on. These trout had a nice silver sheen on them and their flesh was a nice orange color from the good grub they were feeding on in the estuary. Talk about a tasty snack! The next photo shows me with a nice little trout at one of our stops. 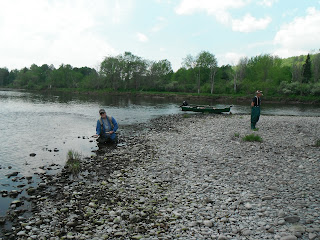 We released most of the fish we caught but we did keep enough for a feed to go with the fiddleheads we picked on our float trip. The fiddleheads were just about done,with just a few stragglers hiding in the grass but if you looked closely,they were there for the taking. Allen and I looked for signs of salmon but we didn't see any on our trip down river. There could have been some around but we didn't see anything show. There have been reports of salmon in the system but they are few and far between at this point. That could change with a little raise of water and with rain in the forecast we will be keeping our eye balls peeled for the first good runs.
The bite in Salmon River is starting to turn on and we have been casting small spinners and worms looking for the first white perch to arrive.The white perch usually show up around the first of June but on a good year they will show up a little earlier. I caught a small one last week but there were no numbers of them. Jamies girlfriend,Brooke M.,was fishing off of my shore and caught the first good sized white perch this year. She caught several yellow perch and then something a little bigger took and she landed a white perch that was big enough to get a couple of fillets off of. Usually a group of us will hit them hard when they are running good and we have a session filleting a bunch for the freezer. After we are done filleting,we have a few beverages and a big fish fry. If you have never tried white perch fillets,you don't know what you are missing! The next photo shows Brooke with the perch she landed. 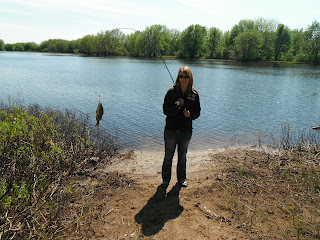 Brooke had a great time landing white and yellow perch that evening but she really got a thrill when a trophy sized pickerel followed her small spinner bait to the shore and smashed it within feet of where Brooke was fishing. It took off,peeling line as it went,leaving Brooke cranking hard on the reel trying to get some line back. After a bit,she finally drug it up on the shore and she had her first big pickerel. The next photo shows Brooke with her big fish. 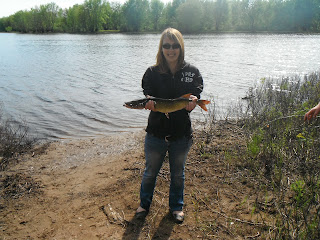 We usually release all the pickerel we catch but Brooke wanted to keep this one for ol' Wes. Wes likes a feed of pickerel as long as its caught while the water is still cold. After the water warms up,their flesh gets a little soft and they aren't nearly as good. This fish measured twenty-five inches on the tape and that is a very good fish for this area. Actually,this is a good fish in any pickerel habitat. They don't get much bigger than this anywhere,regardless of what other fishermen say, because we all know fishermen are notorious liars!
The shad are starting to run in Salmon River and I've been getting reports from Sammy D. and Ralph Goodwin that they are starting to catch some up river. Ralph is better known as a salmon fisherman and fly tyer but when the shad are running,Ralph is one of the first guys out there and he usually has good success when pursuing these silver rockets.Click on goodfly.ca to visit Ralphs web site which showcases the nice flies he ties. Ralph and Sam are also heavily involved in the Annual Monte Farrell Shad Tournament. This derby is coming right up on June 9th and is limited to the first fifty participants. I think the entry fee is twenty dollars and that also gets you breakfast at the Queens County Inn. There should be lots of shad up river at the time of the tournament and rumor has it there is a large run of shad this year. The Chipman Fish and Game Association also hosts a derby at the Chipman Waterfront Campground and this event is always a lot of fun,especially for the kids. I believe J.D. Irving donates the bulk of the prizes and usually has some helpers on hand weighing fish and such. There are good prizes for the winners and all the kids who participate get a prize or two. Volunteers also put on a good lunch after everyone works up an appetite while fishing. Even though this is a 'for fun' derby,it does get quite competitive and there are usually a lot of fish caught of several different species. The tournament date is June 16th with registration time being 9:am.
Ken and I have been seeing a lot of game this spring as we travel the woods tending bear baits and fishing brookies. There is no shortage of moose in our area,that's for sure! We see moose nearly everytime we go out. They look a little shaggy right now, as they are shedding their winter coat. Ken and I had to chase a yearling off of the highway so it wouldn't get hit by a vehicle. I snapped the next photo while it was standing there looking at us. 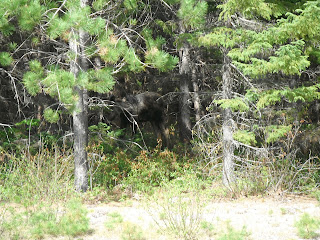 As we continued to make our rounds,we had just come to the covered bridge on the Gaspereau River when Kenny spotted a cow moose out on the flat. She was just standing there,staring off into space. Ken thought she looked quite heavy in the belly and he thought she might calve right there in the meadow. The next photo shows the old cow moose. 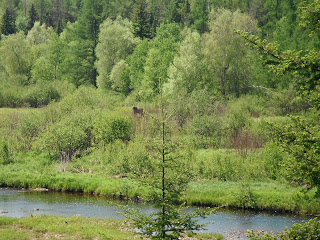 Ken and I have been seeing a LOT of bears at our baits. We have as many as eight different bears coming to one site and they are all different sizes and sex. The real good news is there are big boars among the bears hitting our baits and I will have a more detailed report next month. We're having a ball just watching them and seeing how they act when we bring the baits in.Many times they are right there waiting for dinner to arrive.
Ken and I will be doing day trips on Salmon River starting on the first of June. This is a great day out on the water and a very good way to introduce a child or a member of the fairer sex to some great fishing. You will be fishing from one of our river boats and we provide all the gear and provide a good lunch for two. We charge $220 for a full day or $130 for a half day. Ken and I fully expect all of our guests to catch fish. It's as close to a sure thing as you can get.
I continue to find interesting outdoor items in my travels and the next photo shows a cardboard advertising sign put out by sportsman's cigarettes. This sign features a collection of wet trout flies and a few classic salmon flies that were popular at the time of publication. This item hasn't been restored yet so it looks a little rough but after I clean it up and do a couple of repairs it should display quite nicely. I would date this item to the late Forties or early Fifties. 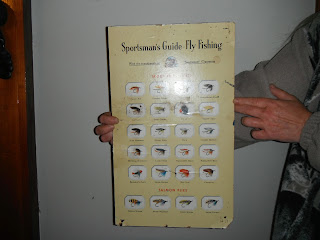 The next item is a nice ceramic plate depicting a classic Currier&Ives duck hunting scene. This plate has a heavy gold decorated rim that gives it a rich look. I would date this item to the Sixties. 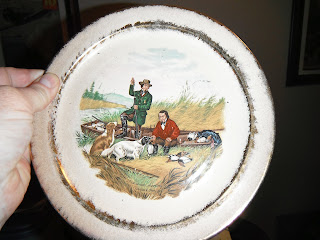 Finally,I acquired an interesting little still bank that was made in Montreal. This bank is made of glass in the shape of an owl and held Bambino olives. An interesting aspect of this little item is that it was produced by one of Canadas leading Mafia families. The embossed script on the bottom front of the bank says'Be wise buy Gatusso'. The cover depicts a little girl sucking her thumb. I date this item to the late Fifties or early Sixties.
I hope you enjoyed my latest bit of blog and I like getting feedback so don't hesitate to contact me.Until next time,this is Dale Bauer saying 'Happy Trails to You....Until we Meet Again!'
at May 31, 2012 No comments: