As I write this,the big chill has settled in over the Grand Lake area and New Brunswick at large. I can't say I like it that much at this point in my life. That cold just seems to get right in your bones! That being said,I will take the cold any day over snow.Too much snow is hard on game and costs people more money. So far this winter,game and people alike have had it easy, with only a small amount of snow remaining. Just enough to keep the skiers and sledders happy. I'm keeping my fingers crossed that this trend will continue for the rest of the winter.
Big game and humans need food and shelter to exist and it seems as if things are getting tougher for both species to get by. New Brunswicks moose herd is thriving but our deer herd is suffering.I guess this has a lot to do with the strict regulations on moose hunting and their greater size. Being larger than our whitetail deer,moose can easily over browse the deer and eventually displace them. This has pretty much been the tale on our crown lands and forests. Thirty years ago,seventy percent of the deer herd lived on crown land.Today,seventy-five percent of our deer herd exists on private land,mainly in the southern half of the province. This isn't big news to anyone because its been happening at a steady rate since the early Eighties.
This winter I've noticed that many hunters have become mobilized to band together on several fronts to try to help create a better environment for growing our deer herd. QDMA has firmly entrenched itself in the province with the addition of a central chapter that has some very smart gentlemen at the forefront of this new organization. That's good news because it is going to take hunters with passion, dedication and strong organizational skills to pressure government and big business into changing their respective modes of operation if we are going to see any improvement in our deer numbers. There is also a movement to implement a change in our deer hunting season by jumping the start date a week later. This would be great for hunters wanting to take a big buck because it would coincide with colder weather and increased buck activity. Personally,I don't see any down side to moving the start date for the deer hunt ahead one week but we all know how slowly the wheels of progress move,especially when dealing with the government.
Although QDMA is primarily a private land owner organization,crown lands and how they are managed is also on their agenda and that's a good thing for New Brunswick deer hunters. There is strength in numbers and with an outdoor network already established,I have high hopes that these organizations will usher in a time change in how things are done in our province.
I have been watching our local deer herd that lives in town and I noticed a very peculiar habit the deer have when feeding in and around the village. These town deer have been going out of their way to browse on the cedar trees and hedges in peoples yards and in the grave yard in town. What is peculiar to me is the fact these deer have a multitude of different plants and browse to feed on and yet they head straight for the cedar when it's time to eat. One hunter on a hunting forum tried a little experiment where he put oats and corn out for the deer along with some fresh cedar boughs and the deer cleaned up the cedar first. All this points to the fact that whitetail deer crave cedar in the winter, for some reason. I'm sure a biologist could explain this phenomenon scientifically but the bottom line is deer in New Brunswick want cedar in the winter. The following photo shows the browse line on some cedars on my friends lawn. 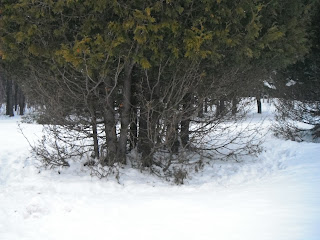 As you can see from this photo,the deer have the ground trampled around this cedar and browsed up as high as they can reach. Here is another photo of the cedar with the houses in the background. 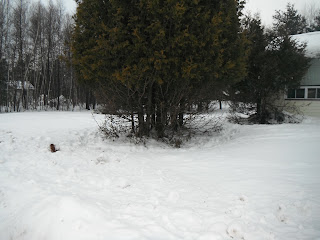 The deer are not just coming out at night to feed but have been coming in the daylight to feed on the cedars as long as there isn't too much activity. I have one more photo of a cedar in the graveyard that is getting chewed up by the deer on a regular basis. 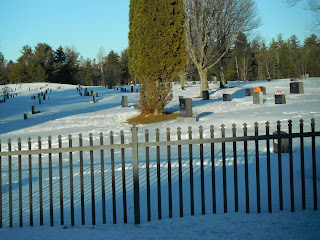 All this points to the fact that deer crave cedar whether they live in town or on crown land back in the bush. Back in the days before New Brunswicks forests were cut down,we hunters were told the deer yarded in the cedar swails and these stands of cedar provided food and shelter for our whitetails during the winter months. I read somewhere recently that back in the day, New Brunswicks forest had three and one half percent cedar in its mix of species. I believe that number today is around one and one half percent.
I can only hope that any recovery plan for deer on crown land utilizes cedar for cover and browse.It only seems natural to do this because the deer know what they want and the town deer are showing us this in spades.
The ice fishing is starting to heat up and there are shacks appearing on Grand Lake and other parts of the system daily.  The brutal cold has caused a slight lull in activity but that will change as the temperature moderates. There are about fifteen shacks at Goat Island and most shacks are catching some nice sized smelt,with the odd white fish and burbot in the mix. Grand Lake has some large smelt that reach ten to twelve inches long. These are freshwater rainbow smelt and although some say the smaller salt water smelt are tastier,I prefer the larger ones for eating. The following photo shows some nice smelt in the twelve inch range caught recently at Goat Island. 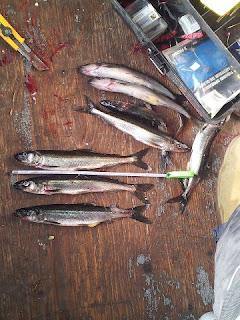 The next photo shows a white fish taken the same day.This fish measured about fourteen inches. 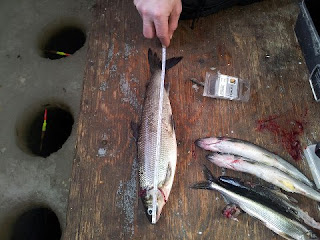 White fish can be very difficult to catch and many times they are caught by fishermen fishing for smelt. They have an extremely small mouth and serious fishermen use a size fourteen or sixteen hook with a very small piece of smelt or shrimp for bait. A bobber is a must because the take is so subtle the bobber barely quivers. White fish have a very thin mouth so care must be taken when bringing them up or the hook will be torn out and the fish lost.
Other parts of the Grand Lake system are also fishing well. Indian Lake has been producing some nice pickerel over twenty inches.The next photo shows a few that were taken last week and kept for a feed. 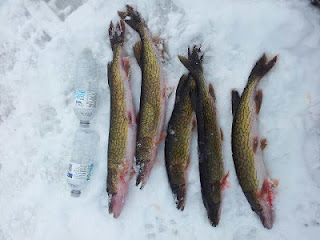 The best bait for pickerel is live minnows but they can be taken with a spinner and fresh bait especially if some action is imparted to the lure and bait. Sometimes some nice yellow perch are caught while fishing for pickerel on Indian Lake such as the following one. 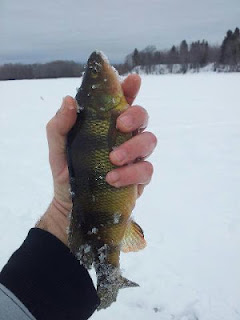 A word of caution here about the worms that sometimes infest the perch. Some people just cook the fillets up and don't worry about the worms but I just can't bring myself to eat any without first checking them in the light. I just pick them out with the end of the knife if any are present.
The burbot bite has been a bit slow but it should pick up soon as more sports get out on the ice and set lines targeting these great eating fish. Burbot are fished on the bottom with a chunk of bait,usually a piece of smelt. This fish is one of the tastiest fish you will catch ice fishing and we always have a fry in the shack whenever we get lucky and catch a few.
If you are a tournament fisherman,there are a couple coming up next month. The first one is the kids tournament put on by the village of Minto at the Key Hole near Princess Park.This tourney will be held on Feb.9th and hot dogs and refreshments will be served during the tournament. Prizes will be given out at the end of the day. Another tournament will be held on Feb.16th.This one is the annual Paul Gallant Memorial Tournament which is held on French and Indian Lakes. Registration is at 8:00 A.M. at the end of the Sand Point Road. This is a money tournament with some very good prizes for pickerel and perch and is always well attended,so get out early and get your spot!
Sometimes Ken and I come across some very unusual things in our travels but Kenny's sharp eyes  spotted something that most sportsmen will never see in their lifetime. Ken was making his rounds putting out coyote bait in the Three Bridges area when he spotted a dark object lying on the side of the road. He had seen signs of an animal digging and scratching on the ice previous to this and thought he should check out the object lying there. He couldn't tell what the animal was at first but after carefully examining it,he concluded it was a black bobcat! Even after showing some experienced trappers he still wasn't sure if it really was a bobcat because neither the trappers or the local DNR had ever seen anything like it. The biologist was called down from Fredericton and he confirmed that it was definitely a black bobcat,one of the rarest sights ever seen in nature. The following two photos show the cat. It was struck by a car so the photos aren't the best but you can see it is a bobcat. 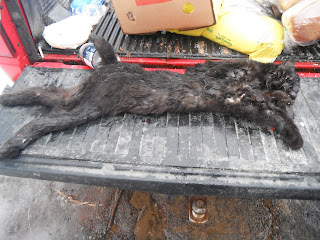 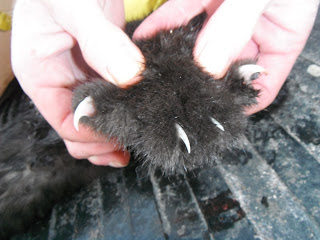 Judging from it's size,I would say it was a young one. It's a shame it got killed but the biologist seemed to think it was old enough it may have passed on it's rare genetics. I sure hope so.
I have been picking up a lot of different knick knacks in my travels and I'm afraid I'm on the verge of becoming a hoarder. I just love finding this kind of stuff but it is taking on a life of its own so I have to either find more room or cut back on my hunting forays. The first photo shows a nice duck print mounted in a convex glass frame. 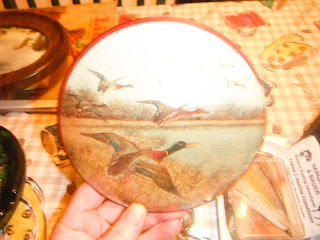 This picture has the makers stamp on the back and is right out of the Fifties.
The next item is another print.This one depicts a bull elk bugling in a meadow. The oval frame is made of tin and has been faux painted to look like wood. 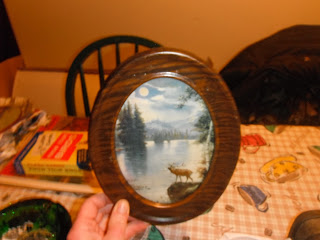 This print is quite old and I would date it to about 1910.
The last item I have to show is a pack of flash cards depicting North American birds. This packet of bird pictures was published by Rand McNally in 1961. Most of you will recognize that name as producers of scholastic materials such as school maps and books. 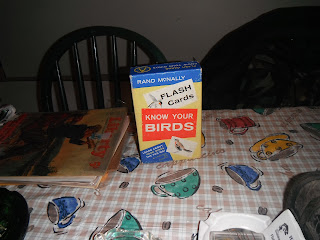 Anyone looking for a fun filled day afield in the Grand Lake area,please contact me concerning any outdoor adventure available in our area. We pretty much do it all so check out previous posts and you will be guaranteed a safe and productive outing with accommodations provided by Pioneer Lodge,if you need lodging.
Until next time,this is Dale Bauer saying"Happy Trails to You.....Until we Meet Again!"
at January 30, 2013 No comments: