The weather is finally starting to warm up and you can really see the leaves springing to life on the maples along Salmon River. It's so nice to see things greening up after having such stark scenery all spring. The first half of May was unusually cold and it took a while for the weather to kick-start all the plants and animals into their annual growth period. The weather certainly controls the ebb and flow of natural life and a cold spell will slow things down until the temperature once again hits a level that induces more activity in our natural environment.
The month of May has always been a magical one for me and at times it seems as if there is just too many things to do during this time period. The spring fishery for Atlantic salmon is now over and the first bright fish have started to show up on the NW Miramichi. This spring the fishing was excellent for black salmon with good weather and lots of fish in the the system. There was a good mix of grilse and large salmon and that is encouraging. One prominent outfitter in the Blackville area said it was his most successful season in all his years of operation. That's good news for everyone involved in the sport and recent programs and support from DFO is sure to help improve the numbers of the ''King of Sportfish''. This photo shows me with a nice salmon taken at the springs on the MSW Miramichi. 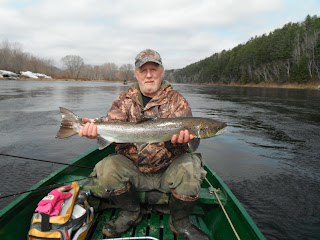 The trout fishing has begun in earnest and there have been some nice sea trout caught in various locations. Fishing for sea run trout can be a hit or miss adventure and timing is everything. These fish will cover a lot of water in one day and to be consistently successful some fishermen will try on a daily basis in hopes of intercepting the run. If you do hit the run, the rewards can be great. It's not unusual for trout up to 5-6 lbs. to be taken at this time on the larger rivers. For many years I fished the Newcastle Stream each spring and caught baskets full of 10-12 inch brookies. I always tried to time my excursions so that the weather was co-operating and the fish would usually be where they were supposed to be for that time of the year. I can remember fishing along for an hour or so and suddenly start to catch nice run trout on nearly every cast. I was literally '' hitting the run '' and when this happens the action is non-stop.
I was out scouting for bear and brought my fishing rod along to try some culvert fishing for small brookies. We caught a few and took in some nice scenery during our tour. The following photo shows me with a small trout I caught during one of our stops. 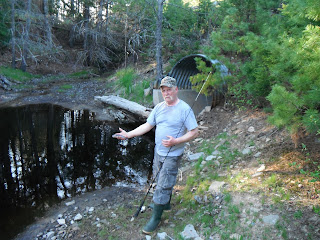 One stop we made was at the covered bridge on the Gaspereau River. This is a beautiful spot and the trout fishing can be very good, if you hit it right. The next photo shows the covered bridge where it crosses the river off of the 123 hwy. 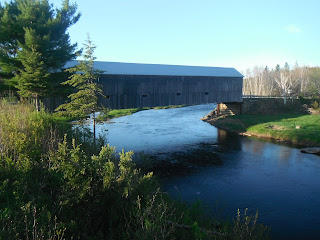 My good friend Stephen D. hits the Gaspereau several times in his kayak and makes the run down to the mouth of Gaspereau where it empties into Salmon River and always catches some beautiful trout. This photo shows a nice feed of trout and fiddleheads. 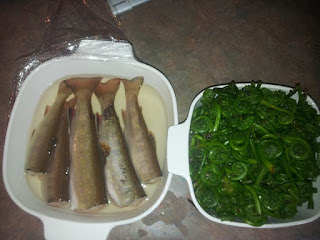 The annual trout derby was held recently in Red Bank on the Miramichi and from the reports I got the fishing was very slow. Normally, the trout fishing is very good at this time but for some reason the bite was off this year. No details on winners or weights.

The 2nd annual striped bass tournament was just held on the week-end following the trout derby and unfortunately the bite was very slow during this tournament also. This was quite a disappointment for organizers and participants alike because the river held over 300,000 bass and they just weren't co-operating. This can be a very frustrating experience when you have thousands of bass churning up the water in front of you and they refuse everything you throw at them. Even though the bite was off, there was a large field of participants fishing from boats and off shore. I didn't get any details of the winners or weights but if I do I'll publish them later. This is a photo of a nice bass caught by Jamie before last years tournament. 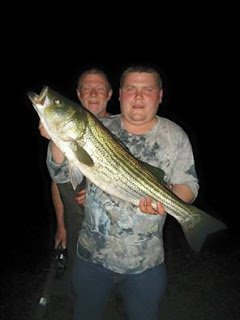 It isn't unusual to catch stripers of this size when the bite is on but timing is everything when pursuing fish and game of any kind.

Salmon River is full of fish right now, with a huge run of gaspereau pushing through with the shad run just getting started. The white perch have been running for a week or so and I caught a small feed of them off of my shore last night. We always look forward to the white perch run and a crowd always gathers to get some fillets off of these delicious game fish. The annual run reaches my place above Chipman around the 1st of June, give or take a week. There is a generous bag limit and since they travel in schools, it's quite easy to catch a limit if the bite is on. The next photo shows me with the first one of the season. 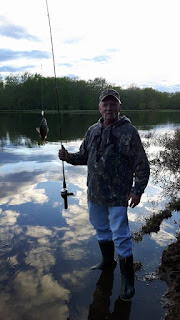 I got a few smaller males but then I got a good sized one to finish the night off. The fishing was actually pretty good considering the temperature had dropped off. You never know what you might catch when fishing the lower Salmon River and I certainly caught a mixed bag. I got two pickerel, two sun fish, five catfish, five white perch, over twenty yellow perch and a handful of chub. I released all the fish except for my feed of white perch. Here is a photo of my perch before I filleted them. 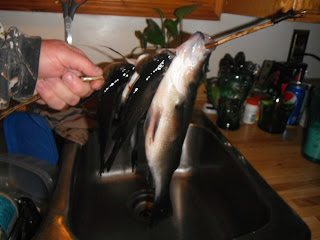 I always used a regular filleting knife when doing up my catch but this year I tried an electric filleting knife my daughter bought me and I won't be going back to the regular knife. What a difference! It's so much easier using the electric knife, especially if you have a lot to do.
As I said earlier, the shad are starting to run on Salmon River and the 12th annual Monte Farell Shad Tournament is scheduled for June 11th. Here is the information on the tournament.
Where: Salmon River

Come Out And Enjoy A Day Of Shad Fishing!


This is a great opportunity for beginners getting into the sport to get into some fish and pick up some tips from the pros who will be fishing. I'd also like to take this opportunity to congratulate Ralph Goodwin on his induction into the Minto Sports Wall of Fame. Ralph is a life long sportsman, guide and fly tying expert and his recognition is well deserved. Here is a photo of Ralph at his shop in Minto. 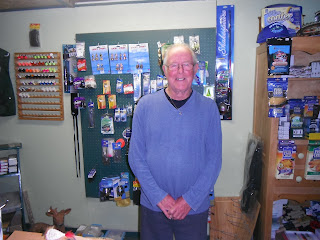 We have been scouting for bear and doing a spot and stalk type hunt in zone 18 in the Dufferen area. Ken and the boys have seen a few bear but only one shooter and he was over the hill before Ken could get a shot. I saw one small boar that I left alone while scouting in zone 17 and Dallas opened a bait in zone 17 that has three different bear on it so far. We have decided to concentrate our baiting efforts in zone 17 because we feel our money is better spent in this zone because it has some good pockets of deer and is full of black bear. I will be adding trail cam photos next month from the bait Dallas started and I'll start keeping track of our efforts in Zone 17 as the summer progresses. Most of our effort will go into scouting areas and setting up test baits in promising areas before baiting begins in earnest around August 1st. We like to start early so our target animals know there is food there before the natural food starts coming on. There have been some nice bears taken around the province with the largest I heard of so far weighing 456 lbs live weight. That's a big spring bear. Here is a photo of a lady hunter with her first bear. 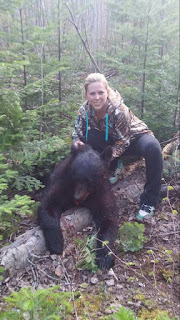 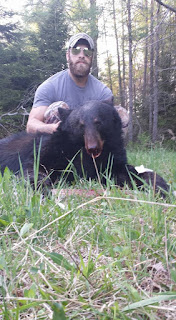 That is a nice boar. This bear is showing lots of space between the ears and would score well. As I said, zone 17 has lots of bears and this year there are several nuisance bears on the outskirts of Minto creating problems. I received a photo of  a monster bear that was tearing a ladies garbage apart. She said this bear showed no fear and acted like he owned the place. I can see why. I would say this bear would weigh over 500 lbs. That is definitely in the monster category. Here is the photo of that bear. Keep in mind that this spring bear is at his smallest weight. 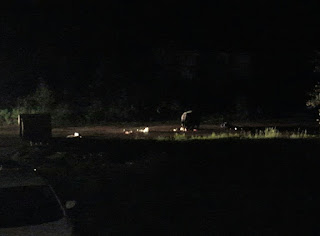 This next photo shows Kenny with a nice boar he took that weighed 225 lbs. field dressed. 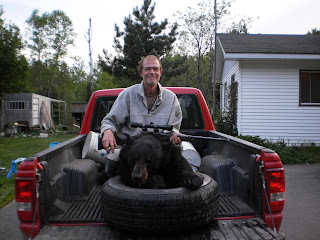 A young lady from Grand Lake, Erika Dietz,  sent me a photo of a young owl that left the nest prematurely and had to be helped back to his home. She said there were two chicks and the nest was quite close to the house. Here is the photo she got. She called him an angry young bird. 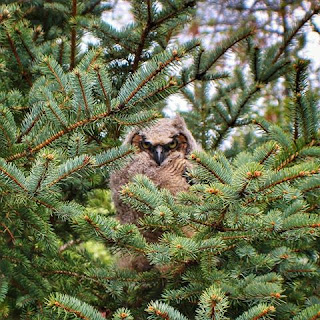 If any sports would like to spend some time with Ken and I in the woods or on the water, just give me a call or shoot me an e-mail. We would love to hear from you and help you plan your trip!