This spring has been one of the coldest and wettest in recent memory. We have had only a handful of sunny,warm and rain-free days in the last six weeks and then its been back to the cold and gloomy weather. The spring freshet here at home on Salmon River was seven to ten days late,peaking around the eighth of May this year instead of the normal time around the first of the month. All of this weather has thrown the scheduled arrival of the various runs of fish and the black bears off by a corresponding period of time.The gaspereau are running heavy in the river right now and that means the trout will be coming right behind them. One gent from the Miramich recently wrote that it was his understanding that the sea-trout followed the smelt in their run up the Miramichi each spring and that may well be true for that river but I had always been told by the old guys around here that our trout followed the gaspereau run and one year I found out just how true that old tale was. My brother and uncles fished the Newcastle Stream religiously every spring while trying to intercept the run of brookies coming up from Grand Lake. Many years we would follow the fish as they made their way up the stream starting very early in May fishing the deep, deadwater pools near the mouth and ending up in the headwaters near Clearwater Brook around the first week in June. One day in late May many years ago,my Uncle Gowie and I put my canoe in at the Park in Minto and planned to sail down to the stone bridge at Newcastle Bridge,hoping to intercept the run of trout that we thought would be starting to pass through the area. We fished along for a few hours with just a couple of bites,nothing of consequence.As we were nearing our take-out point,I dropped anchor and Gowie and I had a couple of beverages while we contemplated our lack of action and what had happened to the run of trout. As I was sitting there in the canoe,my line was dangling in the water,just hanging there. As we were talking,I thought I could feel something on my line. It wasn't really a bite that I felt,just a weight on the line that wasn't there previously. I lifted the rod tip and low and behold,there was a nice plump,silvery run brook trout. As I grabbed the trout to take it off the hook,I noticed a lot of fish eggs spilling out of the trouts mouth. Gowie and I looked at each other in amazement and immediately realized we had been fishing way to quickly for these trout that were stuffed to the gills with gaspereau eggs! We started fishing very slowly,not actually reeling,just letting the line and hook hang in the current.We then proceeded to catch trout after trout,quickly limiting out just minutes from our take-out spot. A lesson well learned on that day by a couple of fishermen who thought they had seen it all and had nothing new to learn.
This is a short video clip of Ken and I fishing some deadwater on Pleasant Brook last year. Ken and I caught and released well over one hundred brookies that day. Nothing real big but it was non-stop action all day long and we had a ball!

After fishing the head of Pleasant Brook for half the day,we headed over to the Gaspereau River to finish the day off fishing some of the spring fed pools located in the upper reaches of the river. Again,we had non-stop action catching small brookies,nothing huge but in large enough numbers to keep us entertained for the afternoon. This is another short clip of me landing a trout on the Gaspereau that day.
The black bears in our area have been late leaving their dens this spring. I'm assuming it's because of the cold,wet spring we had this year but they have finally started hitting our baits on a regular basis. We have areas in our hunting territory that we watch closely early in the season when the bears are just leaving their dens and are foraging for greens to start their digestive systems working. This is a perfect time to take an early spring bear and Ken and the boys always keep a sharp eye out while running our baits for any bear that may be out wandering in the clover fields. Usually,every year one of us will take a nice bear over the fields and this year Jamie was once again able to seal the deal on a nice sow bear. Jamie watched this bear for about ten minutes before he took it to make sure there were no cubs around. This nice sow didn't have cubs for some reason,so she was fair game and Jamie made about a three hundred yard stalk on it. Good job,Jamie! Here is a photo of the bear Jamie took earlier this spring. 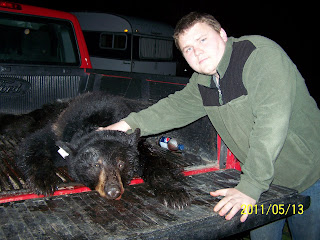 As you can see,this was a good sized sow and the fur was in perfect shape. We have bear baits in several different areas so we don't overhunt any one spot.That said,we are always looking for big tracks and scat and listening for any sightings of large bears. We have found the home range of many large boars through the years just by paying attention to sightings made by walkers or bus drivers and sometimes the local truckers will tell us of seeing a big one while hauling wood to the sawmill. Of course,we can set up just about anywhere within thirty kilometers of home and have bears of some sort on most of our baits but it's nice to know there is a big boar in the area you are baiting.
We are just starting to fish for spring run brookies and it's also the time to pick some fiddleheads to freeze or bottle for the coming winter. Fiddleheads and fish is a Maritime staple in many households,especially communities along any of the larger inland watersheds. They all hold copious amounts of these wonderful green ferns and one cottage industry that has sprung up is picking and selling these tasty delicacies to the local market and some of the larger packing plants. But it is not without it's perils.Just this spring two young men from the St.Mary's band on the north side of Fredericton drowned while out on the Saint John River picking on one of the islands. So if you decide to go,do your homework and err on the side of caution because Mother Nature isn't very forgiving. 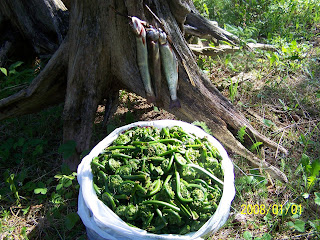 The white perch will be starting to show up ,usually by the first of June and this species of fish can provide a lot of action and some very tasty fillets for lunch. Ken and I and all the rest of the boys have a grand old time catching dozens of these great panfish. They are very easy to catch once you find a school of them. We just use a small spinner and a worm on a spinning or spin-cast outfit and cast and let it sink to the bottom and do a slow,stop and start retrieve back. They don't like to chase their food,they are kind of lazy in the way they feed. The key to taking these fish is a very slow retrieve or use bobbers set a foot off the bottom. Follow these tips and you can take a limit in a hurry if you hit the run right and fish the right spot. This is a photo of me and my grandson Tyler with a mess of white perch ready to be filleted out and deep-fried. 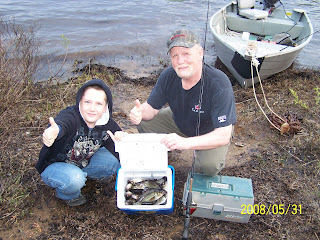 The shad run is just getting started here on Salmon River and we usually get a good run of fish up the river most years. These fish are getting more popular with fishermen all the time.Fly fishermen like fishing them because they can use all their regular salmon gear,other than changing up the flies a bit.Best time to fish shad is in the evening,when they are most active. This is also true of the white perch and another shared trait is that you must fish shad slowly also. Try to let your fly or dart hang in the current where a school has gathered. A word of caution,hang on because a shad can strip a lot of line in a short time,so you will have to reel quickly to stay in touch with the fish after one of those reel-screaming runs. The seventh annual Monte Farrel shad derby is coming right up on June the fourth.Entry fee is $20, with 100% payout. Registration and breakfast is at the Queens County inn
I continue to pick up any nice or interesting items that I see for sale in my travels and it never ceases to amaze me  the amount of great stuff just kicking around until it finds its way to the open market.I've been collecting for a long time now and I don't see any signs of either my passion for finding stuff or the supply of  vintage items to be found slowing down any time soon.So I will continue to share some photos of vintage items as I find them,including this one of a print of hunters at a camp looking at the game off in the distance. 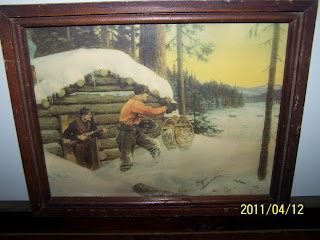 I would date this print to the 1930's,judging by the frame and the subject matter. I love these old hunting and fishing prints that depict some sort of action happening in the scene. I have literally dozens upon dozens of prints from the by gone hey days of the outdoor sporting world. This next item is a photo of an embossed print on copper plate of a great stag. Although this item is a little fresher,I would put it in the Sixties sometime,I really like the style in which this wall hanging has been done. 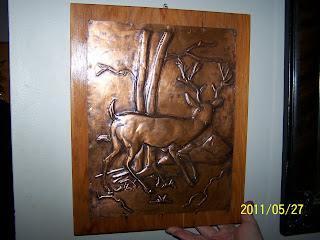 You don't find this style of work very often and I was really happy to add it to my collection. If any readers of this blog see something that they are interested in,please feel free to contact me via e-mail and we can discuss the item and see if we can come to terms.
The spring bear season is just getting started and we will be running day trips on the Salmon River soon,so give me a shout for a day out and about in the beautiful Grand Lake basin. Until next time,Happy trails to you,Until we meet again!
at May 29, 2011 No comments: