January is usually our coldest month and it signals a time for some outdoor sportsmen to change gears and settle in for the winter beside a nice warm fire,maybe tying some flies while dreaming of spring break-up or perhaps reloading some pet varmint load at the bench.But for many other sports,the season is just getting started.The ice fishing season has started up in full force the past couple of weeks,after finally getting enough ice to make it reasonably safe. 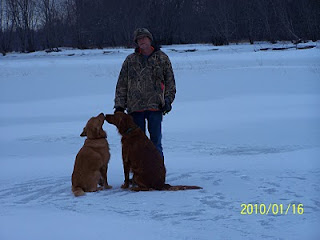 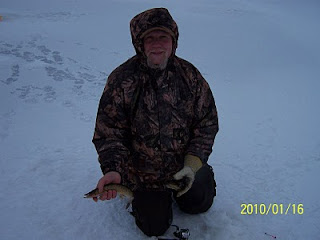 Ken,Curtis and myself had a good day on MCleods Pond at the Park last week-end.The weather was pretty good and we managed to catch a feed of yellow perch and one small pickerel that went back down the hole.Ken had the retrievers out with us and they had a great time running around,stealing bait and fetching all the fish back to Kenney!There are many places to fish pan fish and pickerel between Chipman and Grand Lake on the Salmon River.There are numerous coves and back guts off of the main river that hold fish and are out of the current,making these areas very productive.At the mouth of Salmon River,where it enters Grand Lake,you can fish in the middle in the main channel and good catches of smelt and burbot can be had.Ken and I have been using portable ice huts more and more the last few years.For many years,we built a couple of wood and plastic huts that we put out at Goat Island or off the point at the lighthouse in Coxs' Point. These shacks are nice and comfortable but you are pretty much anchored to that area.With the portables,you are free to travel to different locations,such as Indian Lake or Maquapit Lake.Both of these lakes are part of the Grand Lake system and provide some very good fishing for the sports that are hardy enough to venture forth.

The fishing has been pretty good from all the reports I have from friends and fellow guides from up and down the Four Lakes area.The pickerel fishing has been very good on both French and Maquapit Lakes.Fishermen are getting a few nice burbot around Goat Island.Some of the sports that are targeting smelt or white fish are starting to pick up a few in Syphers Cove on Grand Lake and around Goat Island and the Lighthouse.One thing all these fishermen agree on is the fact that live minnows can't be beat for bait.Many ice fishermen believe in chumming the hole with some type of fine bait food to attract small baitfish and in turn,some bigger sport fish.Ken and I both think this helps and we either use some fish- based food or some meat product,such as ground up liver to chum our holes.We like to use our tip-ups for burbot,baited with a big fat live minnow.Many fishermen just use a gob of liver or a chunk of fish for bait and they seem to do alright by just resting the bait on the bottom and waiting for the burbot to vaacum the bait up. When targeting white fish,a swedish pimple with a very small hook[10-12]or even smaller,tipped with a piece of shrimp or clam will often entice a strike but the take is very light,almost undetectable and the angler must pay close attention or the bait AND the fish will be gone!
Some hunters have switched over to hunting coyotes and there is no shortage of dogs to hunt.Bait is by far the best method for taking these deer killing machines consistently.There has been a lot of controversy lately in the Maritime Provinces about our coyote ever since the young lady singer from Toronto was mauled and killed in the Cape Breton Highlands in Nova Scotia.In an instant,the coyote went from a tolerated pest to a feared and hated evil creature that many feel should be exterminated from existince,if it were possible.These killers have been taking many deer and domestic animals ever since they arrived here some forty years ago or so,but were tolerated because of the degree of difficulty in killing these cunning predators.Nowadays,there is a renewed call for bounties and for the hunting community to actively pursue these killers to control their increasing numbers.Trappers have great success using snares around deer yards or a bait,but the value of the fur is so low many are not pursuing them.It's just not economically feasible for them.Great sport can be had watching a bait and waiting for one to sneak in for an easy lunch.We set up in portable blinds with flat shooting 22:250's or .223's and then it's just a waiting game.I missed a huge black colored one on the first day of deer season and I wish I had knocked him over because I know it was pushing one hundred pounds! An exaggeration you say?I don't think so! I estimated that dog was twice as big as my sixty pound female german shepherd and my son Curtis had to agree with me,as he had a very good look at it also. So if you get tired of sitting beside the fire,just give me a call and Ken and I will guide you for a day of ice fishing or a hunt for some coyote/wolves we have travelling the Grand lake area.
at January 20, 2010 No comments: