THE YEAR IN REVIEW AND VINTAGE STUFF

The year 2010 is coming to a close and for sportsmen it was both a good year and a poor one,depending on the species being pursued. We had a very good ice fishing season last year with many nice pickerel and burbot being caught,as well as some land -locked salmon and brook trout. As usual,we caught some smelt and a few yellow perch,although we don't usually target this species.We certainly have them in abundance in our home waters of Grand Lake and Salmon River but most anglers here don't bother with them. We do get a few Frenchmen from the north that really like catching them and some sports take home buckets of them to fillet and freeze. Although perch are a prolific species in our waters,we have noticed in recent years that they can be fished out in certain areas with too much pressure. It never ceases to amaze me that some people can over harvest fish from an area and think it has no effect on the numbers left to angle. Our resources are NOT infinite! Sportsmen must harvest conservatively or the day will certainly come when the fishing or hunting will suffer. I have seen this scenario played out many times in our woods and waters over the years and there is absolutely no need of this occurring.
The spring salmon season was very good this year with many large salmon being taken.There was a very large run of msw salmon in 2009 and this was the reason so many large salmon were caught in the spring of 2010. Not all guides and sports experienced good fishing but if you had the right flies in the right pattern,the salmon were taking well. Although the run of sea trout was very early this past spring,there were very good numbers of large trout in both the Miramichi and Cains River systems. The fishing for brook trout in the early summer was also very good,with pan sized brookies taking everything being tossed at them.
The fishing for bright salmon started off well but quickly deteriorated as the temperature rose and we experienced a heat wave that took its toll on both the salmon and the fishermen who angle for them. There was a large kill on the Miramichi because of the soaring temperatures and prudent outfitters and sports left the fish alone until the temperatures moderated and the fish weathered the storm,so to speak. There was some  excellent fishing if you were lucky enough to be on the water during these brief periods of opportunity but the timing had to be right. The same could be said of the fall fishing.The run of hook-bills was late arriving and it was only the lower stretches of the Cains that held some of the large males that Cains River anglers love to hook. The fall fishing on the Miramichi River was rather disappointing because of the high water conditions at the end of the season but there were some fish taken.
The striper fishing on the Saint John River was good again this year but you have to know your stuff or you could spend a lot of days going fishless. Good electronics combined with the right bait and gear usually produced fish for sports and guides who know the river.The musky fishing below the headpond was virtually non-existant because of the low water conditions and high water temperatures. The Mactaquac Headpond did produce some muskies in the Woodstock area but the fishing was still poor overall.
There were good numbers of grouse and woodcock available for the upland hunters and Jamie and Dallas took full advantage of this fact by bagging many grouse while out scouting.
If there is one species in New Brunswick that would be a sure bet to bag, it would have to be black bear. The province is overrun with these beasts and while trophy animals are a little harder to take,bagging an average sized bear is pretty much a slam dunk. This is the only species that I would say pretty much carries a guarantee to harvest. That's how good the hunting is in New Brunswick for bear.
I wish I could say the same thing for white-tailed deer but I would be lying. That being said,there are still good opportunities for trophy white-tails,but you really have to work at it and Lady Luck must be smiling on you. The deer kill for the 2010 season was about the same as the 2009 season which was at the low end of the scale. The weather played a large part in the harvest figures with warm temperatures and high winds coupled with lots of rain keeping the numbers on the low side.
We had a very good waterfowl season this year in our area. If you look back at my previous posts,you will see some photos of our group out hunting close to home on the first day of the season. Dallas and Jamie also had some good goose hunting during the early season in some private fields. I got a nice wood duck and it is at the taxidermists right now getting mounted.I've wanted to get one of these beautiful ducks done for some time now and I finally got a specimen worthy of mounting. The colors on these ducks are simply stunning.

On a more personal note,I was fortunate to have won the 2010 Chipman Summer Festival photography contest in the wildlife category. The following photo is one of two puffins I took off of Grand Manan Island during a tour I took while vacationing on that little jewel of an island. I would recommend a tour of the island to all those looking for a relatively unspoiled natural paradise to vacation in.I really love Grand Manan and have visited there many times during my life and I will certainly be back there again.This little island has a good population of white-tails and many islanders were bemoaning the fact that an invasion of Frenchmen from the mainland landed there this deer season and since the island is pretty much private land,the inevitable hard feelings and ill will come to the forefront and many islanders are vowing to post their land to make sure another repeat season doesn't happen again. It will be interesting to see what happens next year on Grand Manan. 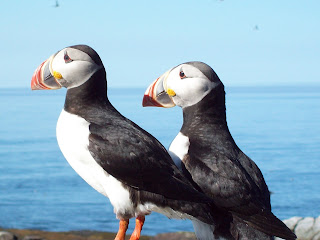 Although we are experiencing some unusually mild and wet weather right now,we are looking forward to some good ice next month so we can get out and do some ice fishing.This can be very enjoyable if you are well equipped for the weather and know the area you are fishing.We have ice shacks that are wood and plastic that we put out on Grand Lake,as well as portable huts for day trips on Salmon River,which has more sheltered coves to provide some cover from the winds that are always present at this time of the year. Our rates are very reasonable and if you require accommodations,the Pioneer Lodge has cabins very close to the lake where we fish.
This month I have a couple of very nice vintage items to show my readers.The first photo is of a folk art carving from a Quebec artist of a trout that has been mounted on a plaque.This carving was done at a studio and is signed by the artist. I am not certain of the year it was done but I am guessing the "60's". 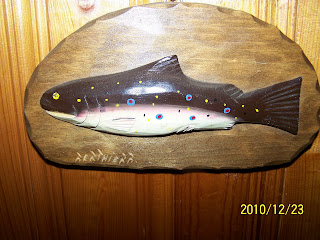 The next item shown is a photo of a rifle I recently purchased with the help of a local antique dealer who picks outdoor items for me when he comes across them.I was absolutely thrilled to get this gun as it was done by a local who is now deceased.It is a "sporterized .303 British built by the late Moses Weaver of Coal Creek near Chipman. Moses or"Mosey" as he was called by many who knew him,was a guide who also did gunsmithing as well as carving and paintings of outdoor scenes during his lifetime. As of late,his folk art paintings are in high demand and commanding some fairly high prices,if you can find them. This is in part due to his living relatives seeking them out and offering high prices for these hard to find paintings,especially the larger ones depicting action hunting scenes. Moses also did a lot of guns for his American sports who visited each fall as well as doing carvings on guns for locals wanting a personal touch such as a deer head or a moose to decorate their favorite firearm. I feel very fortunate to have purchased this gun and I look forward to hunting with it next fall during deer season.By the way,its mounted with a Weaver scope. It only seems fitting. 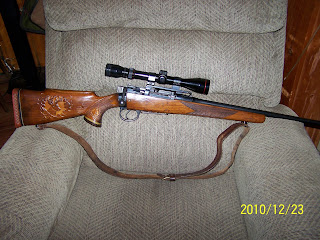 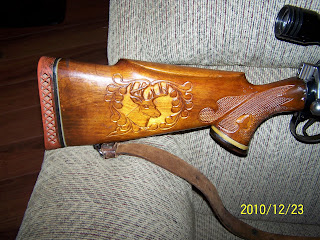 In closing,I would like to wish all my friends and acquaintances a very Merry Christmas and a Happy New Year!
Happy trails to you......Until we meet again!
at December 22, 2010 No comments: