The 2018 deer hunt in New Brunswick got off to a roaring start that included something not seen in years. We had snow during the first week and that snow stayed on the ground in the northern half of the province for the first two weeks of the season. Temperatures stayed on the cool side with many nights below freezing. Deer hunters took full advantage of the weather and hit the woods in droves. Social media has been showing several nice bucks taken so far and again this year, lady hunters have taken their share.
I started writing this piece weeks ago but my computer died and I had to get set up again. For someone who is challenged in that department,it's easier said than done. I had a lot of photos on my other hard drive so I had to gather up a few I had left on my cameras. I'll continue to edit this post as I gain access to the saved material on the old hard drive.
As I was saying, every year more and more ladies are participating in New Brunswick's annual deer hunt and many of them are having good success. Jamies girlfriend, Brooke, took a nice buck early in the first week. This was Brookes second buck since she started hunting a few years ago. This buck had good mass and was a nice, solid New Brunswick buck 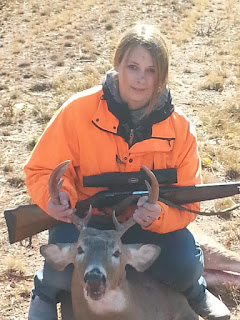 Wes wanted to get his picture taken with Brooke because he got quite a kick out of her getting the first deer in our crowd (and what would turn out to be the only deer). 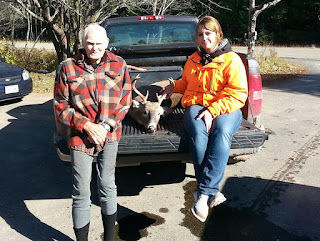 This next lady is no stranger to white-tail hunters in New Brunswick. Over the last few years her big bucks have been appearing on a regular basis,usually early in the season. Once again, Sonia G. of Fredericton tagged out early in the hunt after taking another big buck. That's three in as many years that I know of. I guess that's why her husband calls her "the Queen of white-tail hunters" in New Brunswick! Here is her 2018 buck. 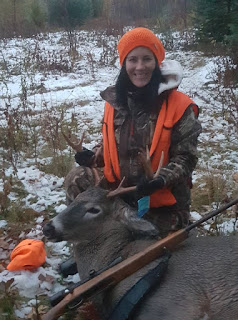 This next lady hunter took a real brute of a buck. Look at the mass on that rack! 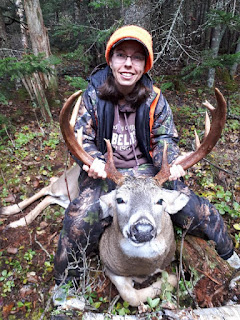 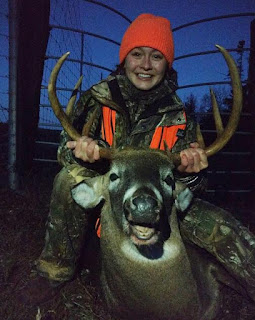 This next lady took her first deer that just happened to be a big 10 pt. 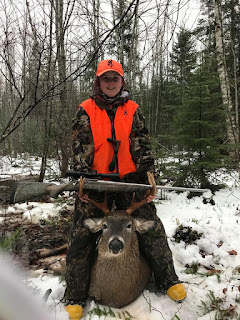 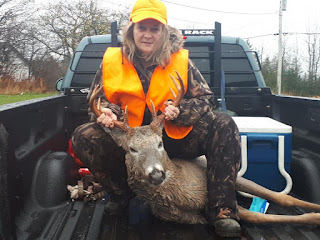 Finally, this young lady took her first buck which had 8 pts. and dressed out at 160 lbs. That's a 2.5 year old deer. This highlights the potential of the bucks in our white-tail herd. We just need more of them! 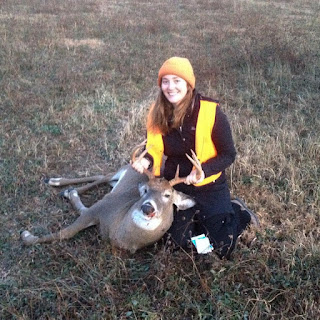 Here is a photo of a buck that was weighed in at a big buck contest this past season. This beautiful buck further illustrates the terrific genetics in our deer herd and the potential to grow world class bucks. This buck weighed 135 lbs. dressed and was 1.5 years old. 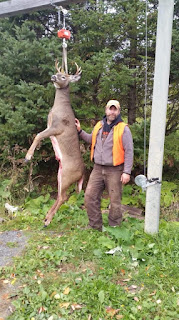 I want to congratulate a young lady from southern N.B. who hunted hard to take her first bear during the fall bear season this year. Kelsey M. hunted hard this fall but was having a hard time getting any bears to hit consistently. There was an abundance of fall forage this year and that makes baiting fall bears a hit or miss proposition. She was starting to fear she wouldn't get it done before the season ended but after some good advice and a "never give up" attitude, she harvested her first bear and it was a beauty. Here is a photo of Kelsey with her bear. 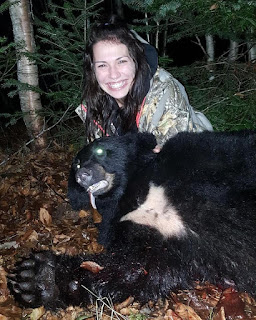 Although baiting fall bears can be erratic. we always get some nuisance bears at our deer baits. Dallas had an average bear stealing his bait at one spot A nice bear showed up at one of Jamies baits.and when a nice boar like him comes in,it's hard to say that's a bad thing! We'll be going after him next spring when our hunters from Germany arrive. Here are some photos of that bear. 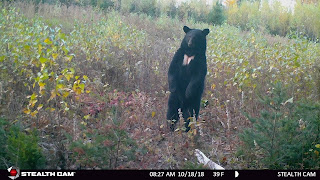 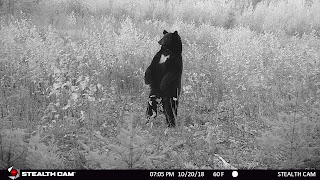 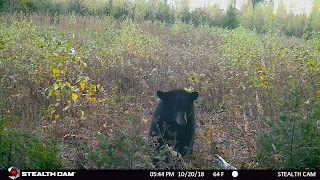 Ken, Jamie, Dallas and myself were all very busy this fall and we all spent a limited amount of time in the woods this deer season. Dallas fired at a dandy 10-12 point buck that was with two does but he never touched him. Jamie was chasing a nice 9 point he had on camera but couldn't lay eyes on him in the daytime. Jamie also passed on a couple of small bucks. Here is a photo of the buck Jamie was chasing this fall. 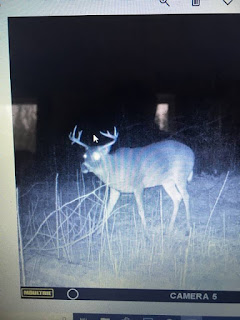 Kenny watched a spot on the Harley Road on and off for two weeks but couldn't catch a buck crossing. I had some small bucks coming in but I wasn't there. Here are a couple of small bucks that were on my camera. 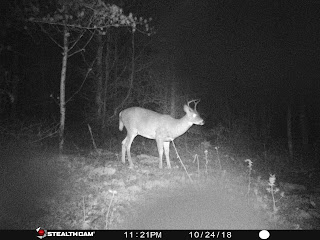 This little buck had spikes about a foot long. 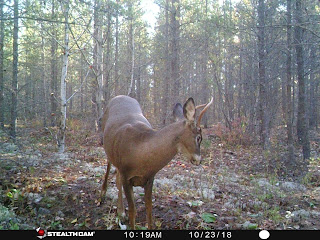 I also had a doe and a button buck at another location. I was surprised that I didn't have any bigger bucks at the two baits I had in that location because last year there was a couple of nice 6 and 8 pointers at these baits.
Preliminary figures indicate a slight decrease in the overall kill in the province in 2018. The numbers increased slightly in the south but the northern half experienced a sharp drop. This was enough to put the kill into the negative zone. What is disturbing about these numbers is the fact that there was snow present for pretty much the whole season in the northern half of New Brunswick. I can't recall a season like that in all my years of hunting. That being said, there was still some beautiful bucks killed this year in some parts of the province. The farm country around Sussex produced some real studs again this year and one bow kill during the gun season was outstanding. Here is a photo of that buck. 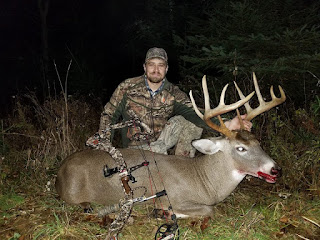 This buck should score high in the archery section of the New Brunswick Record Book.
As usual, I plucked some of the big bucks that stood out off of various groups on social media to include in this years deer hunt blog. This first buck was a heavy weight with 10 pts. and dressed out at 240 lbs. 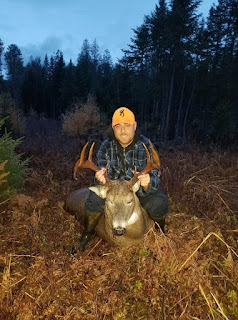 Here is a photo of a farm buck taken late in the season that has it all. 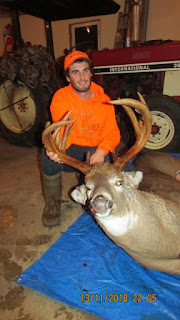 This next buck also came from farm country in the southern half of the province.

Please note that these bucks were all taken by NB residents from various locations around the province but primarily on private ground in the southern half of New Brunswick.
In summation, it is evident that our deer herd is struggling to survive on Crown lands in New Brunswick. It's also quite clear that unless we change the way we manage our Crown lands, our deer numbers will remain low. I have written about what should be part of a recovery plan in the past and these suggestions have also been forwarded to the DNR. This was part of a survey conducted by DNR a few years ago. All that came out of it was a study of the herd to find out what everyone KNOWS is wrong. It's ridiculous to think in this day and age that professionals don't know what the problem is. The problem is mismanagement. Period. I will leave it up to my readers to figure out who is mismanaging our Crown lands to the detriment of deer and other species.
Any recovery program must address the spraying of hardwoods on Crown lands This important food source provides much needed browse for deer.Conduct specialty cuts wherever feasible. Shrink the size of clear cuts  Implement food supplements such as planting clover on any open areas like log yards or clear trails. Plant cedar along all waterways to increase the buffer and provide food and shelter for deer. Finally,the coyote population must be kept in check, especially during the winter months when the herd is most vulnerable to these predators. These suggestions are doable and wouldn't necessarily be that costly. I feel strongly that if these suggestions were followed, we would see a dramatic increase in our deer numbers. I hope the will is there and these things come to pass in the near future. Our deer herd depends on it.

I didn't spend as much time in the deer woods as I wanted this year but I did get to spend some quality time with my youngest grandson,Jack Now, Jack is nine years old and has been fishing with pretty good success for a couple of years. When hunting season came around this fall. he asked me to take him deer hinting. I said I would but I explained to him that hunting wasn't like fishing. I knew he thought that nearly every time you go out,there's shots fired and game killed. I also think he thought maybe he might even get a chance to fire the gun if all went well. I told him right off that his hunting education would be an on-going journey and not to get ahead of himself. His reply was "I'm nearly ten years old!". I said "I know." Kids always try to get ahead of themselves and I was determined if he wanted to hunt, he'd have to get the basics down first. We went out a few times and I think he was starting to understand where I was coming from. We had a great time! He says he's all ready for next year and I promised him there might be a little more action next year. He gave me the thumbs up so he's all in! Here is a short video clip I made of Jack during one of our hunts last fall. Jack wanted me to say that he also saw some moose tracks and a nice flock of turkeys, just for the record. OK Jack.

Our ice fishing season is just around the corner and we will be out there as soon as we get some good ice. We have good success on pickerel and perch in a few different locations. The Grand Lake system is huge and underutilized but we've been fishing it for decades and I like to think we have some great spots and killer techniques. Please contact me if any anglers would like to fish with us this winter. Please note that any ice fishing trips are subject to weather conditions. Safety first always!

This is Dale Bauer saying "Happy Trails to You....Until we Meet Again"