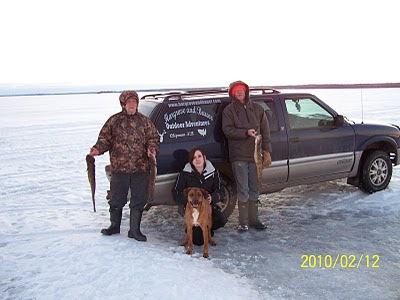 The month of February is usually another cold one but this year the weather has been very nice.We didn't have any cold weather or snow that amounted to anything and this made for some very good ice fishing opportunities on Grand Lake.Early in the month, we fished Salmon River at Macleods pond and got some perch and pickerel,then we decided to hit Grand Lake.Kenny and Dallas have two shacks out at the light-house at Cox's Point and we made good use of them last week-end. As you can see from the photo,we had some luck with our burbot lines.We fish set lines with live minnows or cut smelt on or near the bottom with good results.Burbot are primarily night feeders and they will move into the shallows in the evening looking for an easy meal.They are not a fussy feeder and just about any type of bait will work but we have had the best luck with the minnows or smelt.We don't like to set up in water that is too shallow,especially for smelt or whitefish but for burbot,we move into the coves with eight or ten feet of water. Many fishermen think burbot are the ugliest fish they have ever seen but when they get served up a plate of fish and chips,with burbot being the main dish,they aren't long changing their tune after the first bite! Burbot have a beautiful white meat that is quite a bit like cod but better tasting.
This photo shows some of the smelt we are catching on Grand Lake.These fresh water smelt tend to run a little bigger than their salt water cousins and although some fishermen don't think they taste as good,we think they taste great and they are a little easier to eat because they are a little bigger.We have found that fresh cut smelt is the best bait for fishing these rainbow smelt but shrimp or worms or any small bait will take them.Morning and evening usually produces the best bite but they can be taken throughout the day.Remember,they travel in schools,so when they start to hit,get ready for some fast and furious action. 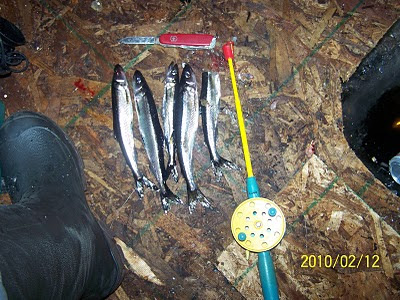 The pickerel are usually fished in the shallow water and respond best to a spinner and bait that is being worked in a jigging manner.These fish have a tendency to roam about a fair amount and we have caught some nice ones in the two foot range in deeper water while fishing for other species.We have found that it is usually a bigger one that we get in this manner.A set line with a live minnow also works well for pickerel.The village of Minto held a pickerel tournament at the Key Hole at Grand Lake On Feb.13 and from what I hear,there was an excellent turn out,with many pickerel and perch being caught.I don't know what the winning fish measured,but I did hear that Bailey D.caught twenty- five pickerel and an equal amount of yellow perch.Bailey was not entered in the Tourney,but was on hand to drill holes for the participants and give a few pointers.Bailey releases most of his fish and is very generous about dispensing his knowledge and help to beginners and the elderly at the tournaments.Kudos to you Bailey. 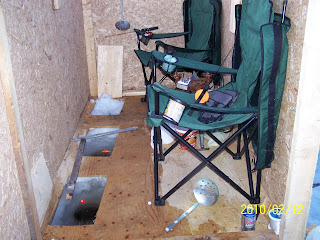 This photo shows the interior of one of the two man shacks we have on Grand Lake.These huts may not look like much,but with a small propane heater,they will keep any fisherman comfortable and out of the biting wind that usually blows on Grand Lake. We also have bigger shacks that will hold four men,for those fishermen that like a little company while fishing.Our portables come in handy when fishing in other locations,usually for pickerel or perch.These portable ice-huts set up and take down quickly and many times make the difference between a comfortable day on the ice or a day shaking and shivering while trying to have a good time.Ken and I really like them and we will be adding a couple more to our ice fishing gear.
Coyotes have been a big concern right across the country this year and even more so here in the Maritimes.Many groups and individuals have been making a real effort to reduce the number of coy-wolves in their area,many times with outstanding results.I borrowed this photo from one of the hunting forums just to illistrate that fact. This photo shows about half of the estimated take of coyotes by two brothers from the Drummond area in northern New Brunswick.These twin brothers are potatoe farmers during the season,but when the work is done,they strike out after these deer killers with a zeal I haven't seen before.If only we had more individuals scattered around the province that are as successful as these two,we wouldn't be long Knocking down the numbers of these animals in the province.It really upsets me when when the armchair experts get going on about how it doesn't matter how many coyotes we kill,they will just respond by having larger litters and it's just an exercise in futility.Well,according to Gerry Lavigne,New Englands premier biologist,taking ANY amount of coyotes out of the system will have a benefit to the deer population.Mr. Lavigne has studied the relationship between coyotes and deer in Maine and has found some very interesting facts.For example,he found that our coy-wolves don't respond to pressure the same as their western counterparts.He says the animals we have don't respond to pressure by having larger litters,all things being equal.According to his numbers,if we could kill as little as twenty-five percent more than natural mortality,we would see a decrease in numbers.He also found that it is quite difficult for one coy-wolf to take down a deer,while three or more are quite efficient at doing so.Mr.Lavigne also found that taking out the dominant animals really set back the killing efficiency of the remaining pack animals.These facts suggest that any concentrated effort to control their numbers will produce a very real benefit to the deer herd.This is all good news for those of us who are concerned about the shrinking size of our deer numbers.Mr. Lavigne goes so far as to say that killing coy-wolves is the single best thing we can do to help the herd to rebound.This is one piece of the puzzle that we can actually realize an effect at growing our deer herd.I would encourage all sportsmen and concerned citizens to take up the gauntlet and do their part in trying to grow our deer herd back to its former glory days. So far,this has been an excellent winter for the deer.We have very little snow right across the province and the temperatures have been very mild,except for our manditory cold snap in January.This all bodes well for our deer and sportsmen across the province are keeping their fingers crossed for a continuation of this great weather to finish off the winter.In the meantime,we will be doing lots of ice fishing,so if any sports would like a day out on the ice,Ken and I will provide transportation and bait for your own shack for sixty dollars per person,up to a maximum of four.Just give me a call or shoot me an e-mail and we will set you up for a day of ice fishing on beautiful Grand Lake.See you there! 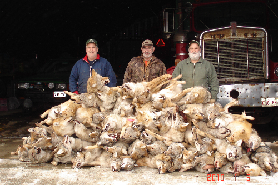