Winter is nearly licked here at home in south-central New Brunswick and by most accounts it's been what most would call a 'good winter'. The Grand Lake area usually gets its fair share of snow but we were spared this winter.The same can't be said for the northern half of the province where the snow is starting to add up,especially this past month.
I often find the final weeks of winter rather boring because there really isn't much going on besides the ice fishing and coyote hunting.February is often a repeat of January in terms of outdoor activities and many sportsmen get a little 'shack happy' this time of year if they can't get out and get their outdoor fix. Ken and I and the rest of our crew try to stay busy during the winter months but if the weather doesn't co-operate,we hunker down and wait it out. Usually we have lots of gear that needs attention from season to season so that keeps us occupied during any down time over the winter.
The ice fishing has been good this year,largely because of the easy access to all the lakes in the Four Lakes region. The light snow pack this year made it possible for many fishermen to use their bikes or four wheel drive trucks to reach the many coves and hot spots in the lakes around our area. The fishing tournaments held this year were also well attended,again because of the relatively good weather we've had this winter. If you ever get the chance to attend one of these tournaments,you won't be disappointed.There are usually some very good prizes and lots of cash for the winners. There are always some good sports around ready to lend a hand by drilling holes, supplying bait or just offering up some tips on getting into some fish.
It's not just the lakes that have good fishing in our area. The lower Salmon River from Chipman down to Salmon Harbour has some great pickerel and perch fishing. I have also caught smelt and burbot in the lower reaches near the entrance to Grand Lake. The following photo shows a two man shack set up at the tunnels near McLeod's Park in Chipman. 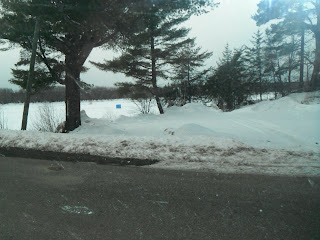 I really like the design of these shacks because they are inexpensive to build and are very lightweight. Just right for two fishermen with a small propane stove to keep the chill off. Two or three holes drilled inside and a few more on tip-ups outside and you've got the recipe for a great day out on the ice.
Ken and I have a couple of two man shacks and a portable four man shack that we use,depending on where we are fishing and for what species. The following photo is a shot of the inside of Kens two man shack. 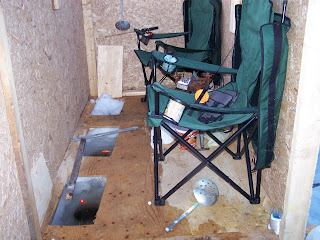 As you can see from the photo,these shacks can be made quite comfortable with a couple of good chairs and a small propane stove. We usually use these shacks on Grand Lake because they are sturdy and able to stand the strong winds that blow up the lake sometimes during the winter. We usually use our portables on the river where there is more shelter from those cold winds that blow up the lake during January and February. The next photo shows some smelt taken from Dallas' four man shack. 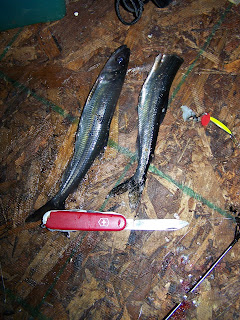 Sportsmen here in New Brunswick can look forward to seeing more small deer next fall because of the mild winter we had this year. Usually it's the young deer that take a beating when we have a winter with a heavy snow fall but it's also hard on the older bucks. Hopefully,some of the big bucks we were chasing last year will survive and grow even bigger by next fall.The following photo shows me at a rub made by a nice buck I hunted at the end of the season last fall. This buck wasn't killed so hopefully he will still be around the area so we can take another run at him. 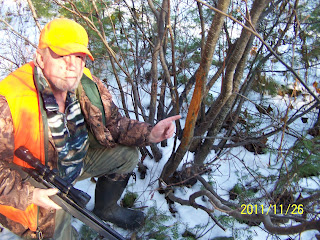 I have been picking up some very nice vintage hunting and fishing magazines this winter and I never tire from seeking these great magazines depicting bygone days afield. The first photo is appropriate for this time of year and shows an ice fisherman hoisting a nice pickerel from his hole. I like covers that depict some action and this one fits the bill nicely. I also try to get ones that display the date prominently. 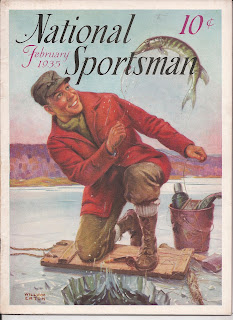 The next two magazines are both from 1940 and are quite similar in their design with both having a marsh and ducks for a background. What I found unusual about this is the magazines are from two different companies yet the similarities are striking. Was someone copying the other? 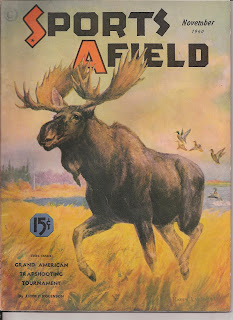 As you can see,the similarity is hard to miss. Finally, I have a photo of a hanging candle holder depicting some ducks flying over a marsh. I would date this item to the late Fifties or early Sixties. 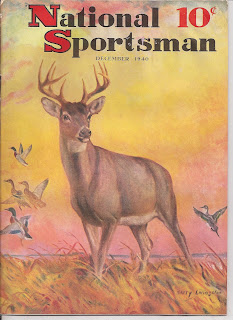 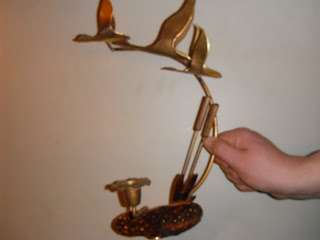 Although this months blog is rather short,I hope my readers enjoyed it and hopefully it provides a small respite from the rigors of our long New Brunswick winter.If any sport would like a day or a week out in the Grand Lake area,just send me an e-mail or give me a call to make your arrangements. This is Dale Bauer saying 'Happy Trails to You....Until we Meet Again'!
at February 29, 2012 No comments: