New Brunswick's deer season just ended a week ago and although the official numbers aren't out yet, preliminary numbers indicate a small increase in the  harvest this year. That would certainly make sense because we have had a couple of good winters that has allowed the herd to expand....a little. Successive good winters allows all age classes to better survive but usually fawns, yearlings and 2.5 yr. old deer reap the greatest benefit. A heavy snow pack during the winter has a negative effect on smaller deer on two fronts. They can't get food as easily and may be over browsed by the larger deer and they can't escape coyotes and cats if they are bogged down in snow. These two factors kill a lot of deer during a bad winter.
In our hunting areas around Grand Lake on the Crown land we saw a slight increase in small racked "dink" bucks and does but the older deer with the big racks that most hunters are looking for were few and far between.. The older class deer that are left are very hard to pattern because they are covering a lot of ground these days. Many times these big boys are here one day and gone the next.. I didn't kill a deer again this year but Jamie bagged a young six pointer on the last week-end of the season. He hunted a big buck in Salmon River for most of the season but never laid eyes on him. That happens a lot these days. Jamie switched tactics and joined Kenny the last week-end for a hunt on private ground near Pioneer Lodge in Cumberland Bay. That proved to be a smart move. Here is a photo of Jamies 2017 buck. 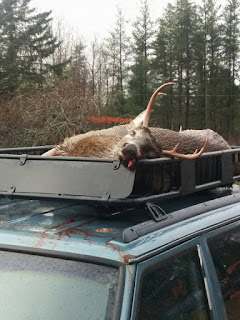 If anyone is wondering how Ken, Jamie and Dallas got their start in the outdoor life just take a look at this photo. Ol' Wes had these boys on the hunt as soon as they were big enough to buck some brush. As a matter of fact, Wes was known to put one of the boys in his knap sack and take them on a hunt BEFORE they could get around easily. This is how these guides got their start. Thanks Wes!.These boys turned out to be good woodsmen with your guidance. 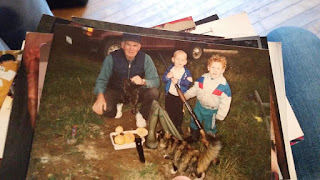 Jamie's uncle Kenny didn't tag a deer this year either but he helped a young local lad get his first buck. This kid was really pumped after getting his first deer and in this instance size DIDN'T matter. I think it's very important for young hunters to harvest game early on because it fires up that hunting instinct and that success spurs them on during future hunts. The same thing goes for fishing. Young people lose interest quickly but when they get that first rush of adrenaline they are usually hooked. This is a photo of Kyle Hay with his first buck. Well done Kyle! 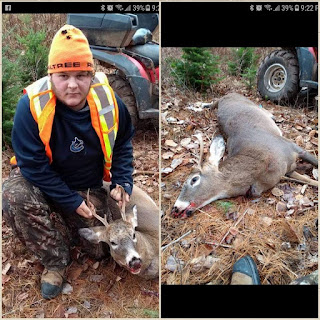 I should also mention that Kyle's step-dad, Derrick Bizeau, played a big part in his success. Make no mistake about it, this is how it all starts for these young hunters.
Although Ken and I didn't kill a deer this year, we did have a few smaller bucks on our cameras. These young deer will be pretty decent bucks next year, if they survive. Here's a photo of one buck I was hunting this year that was harvested by Andy A. from the Minto area. 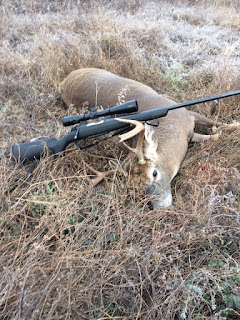 I don't know Andy personally but I do know his mothers side of the family quite well and they are all good woodsmen. This deer was killed on Crown land between Minto and Chipman. Good job Andy!
I had a smaller buck on the camera that wasn't killed from the same area and he should be a pretty good buck next year. 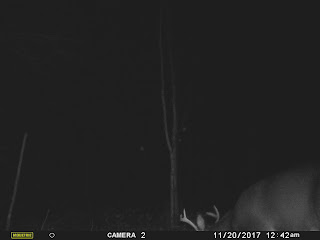 I don't mind seeing these smaller bucks around because I know if they can survive until the age of 3.5 years old, they will be nice bucks. Most deer of this age in New Brunswick will dress out between 160-180 lbs. and have a 8-10 point rack.. I'm using average figures here and there can be some variation either way. Jamie and Kenny  had a young buck with good potential on one of their cameras. This is going to be a nice deer next year. 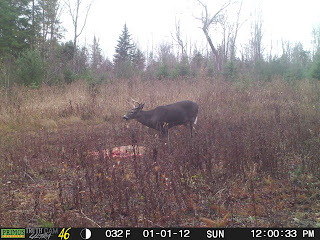 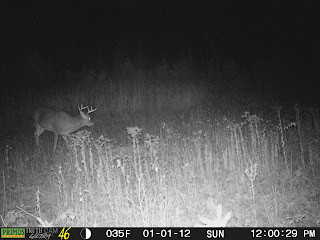 This deer is on private ground and very close to home.. We like seeing these bucks in our back yard. Our immediate area was known for holding big bucks back in the day but with the extensive logging over the last couple of decades, our area has suffered heavy losses in the deer herd. This isn't just a localized problem. It's province wide with the exception of some private land near the suburbs, predominantly in the southern half of  New Brunswick..This problem could be fixed relatively quickly with the right application of common sense and decency but the will to do so has to be there first. Only time will tell but I'm an optimist and I believe there are better days ahead for New Brunswick's deer herd.
The private land around Grand Lake has long been a white-tail haven and there is still some good deer hunting to be had ,if you have access. There are some good bucks in these areas but the bulk of the deer hunting is done by local land owners. One young fellow I know from Grand lake has been having great success the last few seasons. Ryan Smith and his hunting buddies are co-operating and holding out for bigger bucks and it's paying off! Ryan has taken a nice buck the last two seasons and his buddies are doing well also. These guys are hunting hard and have a lot of time and equipment invested in their deer hunts but that's what it takes to harvest big bucks in New Brunswick today. This is a photo of Ryan's 8 point buck he took this year. It dressed out at 190 lbs. 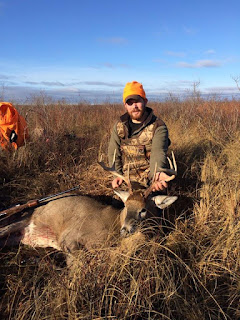 He took a similar deer last year. Both these deer are considered trophy sized bucks in our area by today's standards


Here is a photo of one of Ryan's hunting buddies with the buck he got near Grand Lake on private ground. 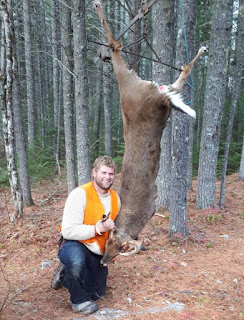 This big buck dressed out at 232 lbs. and won the camp contest. for heaviest weight. It sported a nice heavy 9 point rack. Well done boys! I think it's great to see these young hunters getting the job done on these local big bucks. The potential is here and with a little luck and determination, it can happen.
Other parts of new Brunswick also seen some great bucks harvested in 2017. Parts of Miramichi and Woodstock in central N.B. had some nice bucks taken and in the south around Sussex and Saint John there were some really nice bucks killed this year. Here are a few photos of a huge buck taken in Sussex on private land by a young lady hunter. 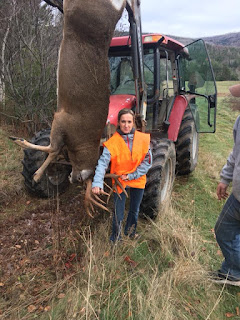 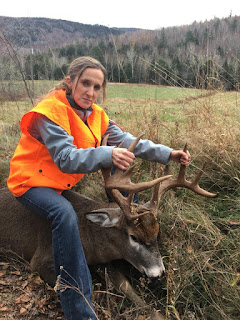 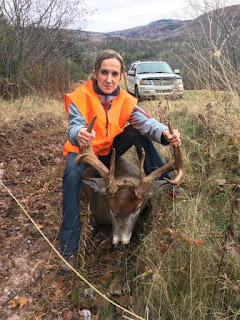 That's about as good as it gets in New Brunswick but every year monsters such as this are still being taken. Congratulations to this young lady for taking a trophy of a life time. This next photo shows an old warrior from the northern part of the province that was killed this year also. This deer was taken near Edmonston. 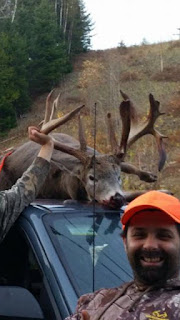 This buck had a very heavy rack with 17 points. It dressed out at 245 lbs. This is another example of the quality of our bucks if they can survive for a few years. Here is another photo of a big racked buck taken this year.by a lucky hunter  in New Brunswick. 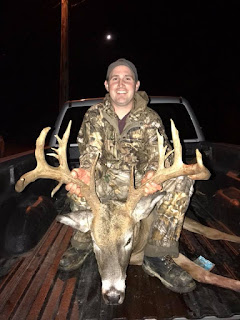 This buck not only has mass and tine length but also has a good spread with kicker points for character. Another great buck taken here in New Brunswick.
I want to take this opportunity to congratulate my old friend from my youth, Kevin Voutour, on taking an absolute monster buck this fall. Kevin and I grew up as neighbours in Minto and travelled together for years as kids and later on as young men. I remember Kevin running his trap line after school and on week-ends as much for the love of the woods as for the extra money he made on his line. He was mainly a water trapper but he wasn't limited just to those sets. I remember seeing one of his fur receipts from a few years ago and he put a pile of hurt on the local coyote population at that time. As we got older, we started hunting ducks at MacDonald's Meadows and running the big woods of  Salmon River in the old burnt lands at the mouth of Little Forks. Here is a photo of Kevin and I with a moose I got one year in that area. He will tell you that moose hunting is his "thing"but it's much more than that. Kevin doesn't miss anything in the woods. Trust me. 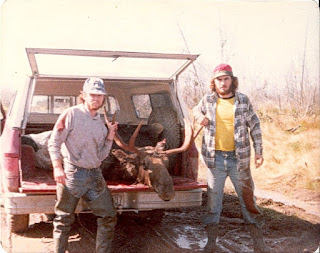 We also stayed at camps on Newcastle Stream and at the head of Gaspereau River. Wild as hawks and living for the hunt! I'll say it again, "There's no life like it!".Of course, we grew up and moved on but we always remained connected through mutual friends and casual meetings. Today, Kevin and I are getting a little long in the tooth and I suspect his recent trip to Saskatchewan  was a gift to himself for reaching that special milestone in life. Kevin has come full circle with this buck and it will be nearly impossible to top this trophy. Looks good on ya pal! You earned every inch of it! This is a photo of Kevin with his buck shortly after he killed it. 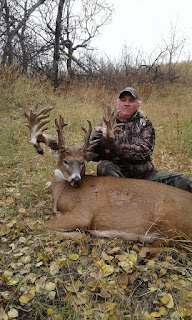 This buck had a live weight of 302 lbs. and dressed out at 242 lbs. The outfitter didn't know this buck was in the area they were hunting because there were no trail cam photos of him.What this buck scores is still to be determined. It would be safe to say it  is over 200 inches.. Congratulations again Kevin on your trophy buck!

As hunting season winds down for us here at home on Salmon River, we will still be out for rabbits and partridge while scouting around to see what deer are left. If we can get another good winter this year, our deer herd will increase correspondingly That's a good thing from where we sit..

Until next time, this is Dale Bauer saying "Happy Trails to You....Until we Meet Again".
at November 29, 2017 No comments: