Snow, snow and more snow. We have been getting a lot of snow and cold temperatures here at home on Salmon River this past month and many folks are getting tired of it. I can't say I blame them. There must be nearly five feet of dry, fluffy snow down now and it is costing citizens more money and hardship just to stay ahead of it. In many cases it really affects a persons bottom line and their ability to get around while doing chores and participating in outdoor activities.
Even the snowmobilers have been complaining about the snow conditions. After you leave the groomed trails, be prepared to get bogged down and stuck. The deep fluffy snow is making it very difficult to get around especially with a short track on your machine.
The ice fishing has been very slow this year due to the tough conditions but fishermen that did get out managed to land a few fish. I've been getting reports of a few trout and smelt being caught and the odd land-locked but most of the catches have been pickerel,  perch and a few burbot. One lucky angler landed a thirty-three inch burbot while fishing Grand Lake recently and this is considered a large burbot on our lake. this is a photo of Mike T. and his fish. 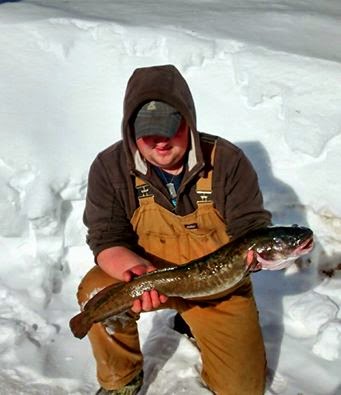 Pickerel and perch may be your best bet for actually hooking up but don't overlook burbot if you are fishing Grand Lake for other species. These freshwater cod or ling may not be pretty but they sure are tasty! That's another good reason to target burbot. They make for the best fish and chips. There are lots of good areas on Grand Lake to fish for burbot but keep in mind they are largely nocturnal so fishing early or late will be the most productive times. Try to fish coves or inlets with at least eight to ten feet of water. Many times they will move into shallow water to feed or breed especially at this time of the year. Another tip I will give novices is to use a large hook with a good-sized gob of bait and fish it just off the bottom. Burbot have a big mouth and gullet and they subscribe to the "bigger is better" theory. An egg-sized bait would not be too big or a large live minnow has been known to work well when fished near the bottom. Remember, all lines must be tended and it is illegal to set lines overnight unattended.
This is tournament time and after much difficulty, the annual tournament at the Key-Hole on Grand Lake will be held on Saturday, Feb.28th. This is a fun tournament that sees kids, adults and seniors all trying to catch the biggest pickerel. This tournament is sponsored by the NBIFT and is always well attended. Hot dogs and hot beverages add to the festive mood.
Because of the late start due to weather and ice conditions, I cannot make a report on the tournament at this time. Please stay tuned for details and results on this years tournament in a follow up post in a few days.
at February 28, 2015 No comments: