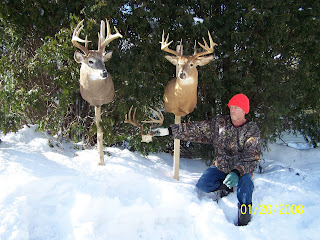 Kenny Hargrove has taken lots of bucks through the years. Of course,a lot of those deer were smaller ones such as spikers or four pointers,right up to small sixes and eight point basket racks.But he has also downed some really nice ones ,especially the last few years. These bucks shown in the photo were all really nice bucks. The one on the left weighed in at 268 lbs. dressed. The 12 pointer on the right was killed on the Hargrove Homestead about five hundred yards from the house! This buck was killed early in the first week of the season,with his face right in the apples. Ken and I both believe that the first week of the season is often as good as the last week for taking one of these big bucks.If you can get them coming to bait,they will come with consistancy before the rut kicks in and they aren't as spooky from increased activity in the woods. I guess what I'm really saying here is these big bucks can be taken just about any time,if you do your homework and set up properly for them. I will be posting a photo of my best bucks in the coming weeks,as well as Duane Hargrove's best bucks taken in the last four years. It is important to note that these bucks were all taken in the last five years,not back in the 1980's when eveyone seemed to be getting a big one.Our deer herd has grown steadily over the last five or six years and now we are starting to see the results of mild winters and good management on the part of the DNR.The kill this year was the highest in many years and so far this winter the herd in our zones are managing quite well,so this should bode well for the 2008 deer hunting season. If any sports would like to book a hunt for one of these big NB bucks,just e-mail me or give me a call,and we'll fix you right up! The last week of the 2008 deer hunt has been booked,but we have prime time slots left for any deer hunters who are serious about downing one of these monster NB bucks.
at January 20, 2008 No comments: