A Cast to the Past 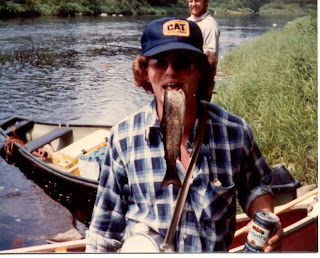 Spring has finally arrived here in New Brunswick and by all accounts,none to soon! Salmon River is open except for Salmon Harbour and the Miramichi River has some open spots and the locals are catching a few salmon from shore,but all the ice hasn't run ,so it isn't safe for boating yet. There are a couple of new regulations for fishing spring salmon,one being barbless only fishing.This is probably a good thing as it will save some of the larger fish from being exhausted and dying after release.The other rule change is a maximum of ten fish hooked and released per day. This is also a change welcomed by the guides and outfitters alike because many sports were coming back to camp after a great day of fishing,catching maybe a dozen fish and talking to their buddy or another guest who has caught and released say tweny fish and feeling disappointed. It was turning into a numbers game instead of a great fishing experience and Atlantic Salmon fishing is definitely not a numbers game. These fish are hard to catch and it was putting unnecessary pressure on the outfitters and the guides were getting very frustrated with the situation.This should help to put things back in their proper perspective and make for a more enjoyable experience for everyone involved.Ken and I have been very busy putting out salt and mineral blocks for the deer that Mike T.and his group from N.Y.State and our other guests will be hunting next fall.We are also getting ready to put out our baits for the spring bear hunt. The photo in this post is a bit unusual,but true to form.It shows my younger brother having a little New Brunswick sushie on the famous Caines River while on one of his many trips fishing for sea-run brook trout.Tim love three things in decending order of importance.Beer,women and fishing. He certainly was an accomplished fisherman.I'm not really too nostalgic,but each year at this time I think of him fishing the lower Newcastle Stream for big trout coming up from Grand Lake and picking many pounds of fiddleheads to sell locally. Tim wasn't really much of a hunter.He didn't have that agressive streak that it takes to be a good hunter.In many ways he reminded me of an old woman in the woods.I guess that woman would be our grand-mother Boyd.She was a kind,gentle soul who could tell you anything about the local plants and animals,as well as local woodcraft.Tim was a lot like that. I miss him. On a lighter note,the numbers of fish and game in our area have never been better in recent memory and Ken and I are looking forward to having many memorable days afield in the coming months. We hope to see you all soon!