We are now at the mid way point of our long Maritime winters and so far it has been a good one. This time last year,we were having frigid temperatures and storm after storm. This year there has been very little snowfall and temperatures have been moderate. It's only been colder than -10 during the day a couple of times. So far, it's been the kind of winter most of us look forward to but, as of late, rarely get. The last few winters have been pretty rough here at home on Salmon River and it's always nice when Mother Nature gives us a break. It sure helps our wildlife, especially our suffering deer herd.
Speaking of deer, it was interesting to note that even in the worst year on record there were some beautiful bucks taken across the province. Another thing I noticed was very few of those old gnarley racks were taken. A buck usually has to live 6.5+ years in good habitat to be able to add the energy to developing a heavy rack. Maybe the age class of our herd is shifting downward? Regardless, we are lucky that most bucks here are over 200 lbs. and have a nice rack with 8 or more points at 4.5 years. My last blog shows some of the bucks taken by residents across the province. These photos clearly show the potential our herd has if given all the right ingredients to grow and sustain themselves. But we hunters must help them if they are ever going to reach their potential. I have laid out a plan for recovery of our deer herd in the previous blog entry. This plan comes from my personal observations and hopefully, the powers that be will implement some variation of this plan into action. Something has to be done!

I want to show some photos of  hunters who were skillful enough to kill a "Grand Slam" of big game animals here in New Brunswick last year. This is not an easy task to do because first of all you have to be lucky enough to get drawn for a moose tag. Then you have to take a moose, deer and bear. You will note that these hunters many times take quality animals in completing this endeavor. This first hunter is well known in outdoor circles and does well in the woods and on the water. This gentleman also catches some beautiful salmon early in the season on the Northwest Miramichi. He is a very well rounded outdoorsman and that can be said for all the hunters that accomplish this feat. This first photo shows the moose he took in 2015. 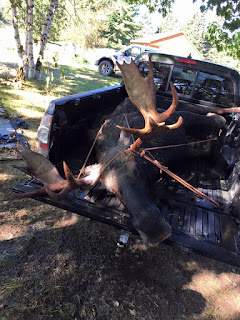 He took a nice black bear earlier in the year. Here is a photo of his 2015 bear. 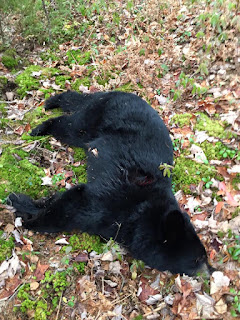 Finally, he took a hard earned buck to complete his 2015 Grand Slam. 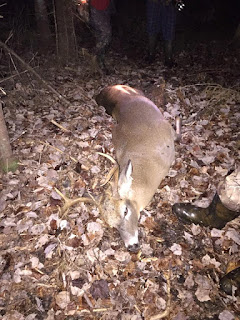 As you can see, these are all quality animals taken fair chase here in New Brunswick.
This is another hunter who scored a Grand Slam in 2015. This photo shows a composite of the animals he got last year to complete his slam. 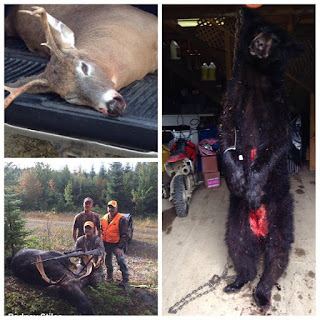 Again, note the quality of the animals that were taken.
Finally, rounding out the Grand Slams for 2015 is our next hunter. This hunter took a nice spring bear to start his quest. 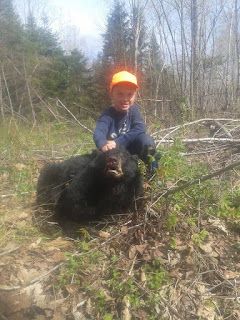 Next, he took a nice bull moose after being drawn in the annual lottery draw. 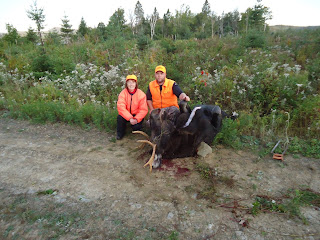 The next photo shows the trophy buck he took during the 2015 season to complete his slam. I can almost bet you that buck is on his wall at home 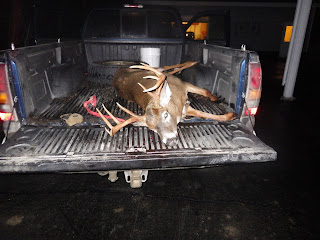 I would like to congratulate all these hunters on their accomplishment. These Grand Slams only come from hard work and dedication and for that alone they should be commended.

Every year the timing of the rut is governed by the weather. If it is too warm the rut will be subdued and stretched out over a longer period of time. Conversely, if the weather turns sharp and cold, the bucks seem to get running all over the place. This is the time to be hunting big bucks if you can arrange it. The urge to breed keeps them on the move day and night and that makes them vulnerable. Most normal years this will be the last week of  the season in November. Personally, I have taken a couple of bucks on the last day of the season and have seen two or three more trophy sized ones in the dying moments of the season that I didn't connect on. You just never know when he is going to step out. The next photo shows a nice, wide- racked buck taken on the last day of the season. That's enough to put a smile on the face of even the most hardened trophy hunter. 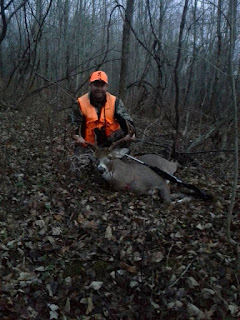 The next buck was also taken on the last day . This buck dressed out at 172 lbs. and sported an 8 point rack 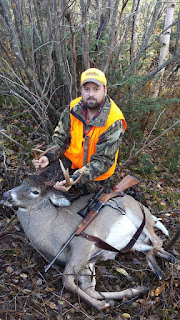 The next photo shows a beautiful 9 point buck that was taken in the last minutes of the last day. Times like this make for great stories and memories. 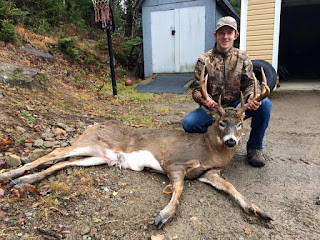 Here is another great 10 point buck taken in New Brunswick on the last day of the season. 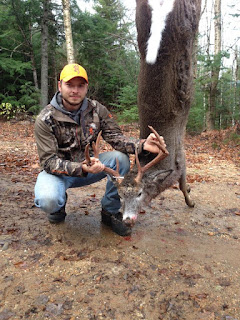 This next photo shows a nice heavy racked buck that was taken on the last day of the 2015 season, 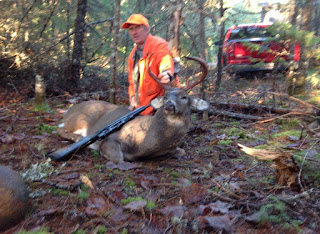 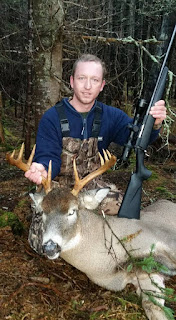 This next buck dressed out at 190 lbs. and had a nice 9 point rack. It was taken on the last day of the season. 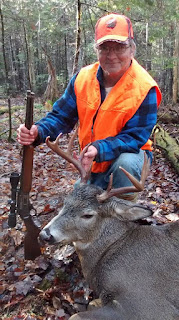 The next buck was also taken near the end of the season last year. This buck had a beautiful rack on him and is a testament to the caliber of bucks we have here in New Brunswick. 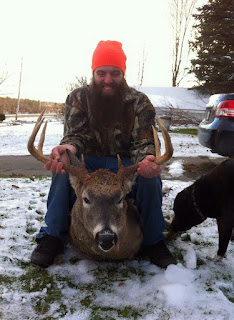 As you can tell from these photos there were some nice bucks taken right up to the end of the season. I want to congratulate all of these successful deer hunters on a job well done. With our deer herd numbers dwindling, killing bucks of this size is quite an accomplishment.

Finally, I want to include a photo of a young lad who took his first buck last year. I would dare say this young hunter is hooked and can look forward to many rewarding days in the field. 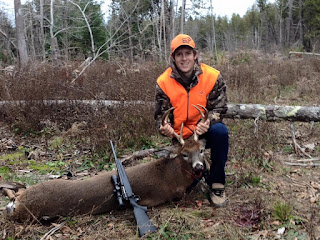 In closing out this bit of blog, I can only say I hope the weather continues to be mild with little snow. This will help all our wildlife but our deer herd are the animals that benefit the most when we have a winter such as this. The herd actually has a chance to grow with more fawns being born and it also allows some of those old bucks to survive. Mother Nature has done her part and given the deer herd a break this year. Will hunters,government and big business do the same? I sure hope so. I love deer hunting!

If any sport is looking for a hunt in New Brunswick or a fishing trip on one of our waterways don't hesitate to give me a call or an e-mail for more information on how to make your adventure a reality.

Until next time, this is Dale Bauer saying "Happy Trails to You, Until we Meet Again"