The forests and meadows here at home on Salmon River have finally turned a nice shade of green. Each year it seems to take such a long time for the vegetation to 'green up'. The stark grey features of a winter just past always seems to remind me that Mother Nature has her own rhythm of change and no amount of wishing or praying will speed her up or slow her down. I guess that's just the way it is and that's fine by me.
We got away to the MSW Miramichi last week and managed to get a good bunch of fiddleheads and a couple of nice winter trout to go with them. The fiddleheads seemed to peak a bit earlier this year but there were still lots around to pick although you had to search for them in the lower lying areas. Some of the commercial pickers were still picking in the lower areas as late as last week-end and having good success. Many native New Brunswickers pick up some extra cash over a three week period when the fiddleheads are in bloom. In a" have not" province like ours this extra income comes in mighty handy for those on a fixed income but are able bodied enough to get out and pick a few pounds of these delicious greens. I'm surprised the government hasn't tried to screw this little home grown enterprise up for the folks who need the extra income at this time of year. The following photo shows a bunch of picked fiddleheads and a nice brook trout in the landing net. 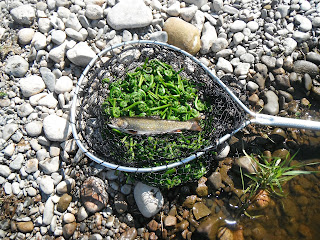 These new style landing nets are the cats meow for cleaning fiddleheads. The holes are just the right size for cleaning and you can do several pounds at one time which makes it very convenient. We just filled the net about half full and stood in the current and swished them around in the net and they were cleaned in no time. We picked about thirty lbs. and had them cleaned and bottled by suppertime. We will eat them over the next year and do it all over again when the time for picking comes around again. Fiddleheads can be eaten with just butter and salt and pepper or doused with vinegar to taste. Some people make fiddlehead soup and enjoy them this way but I have never tried it so |I can't speak about the taste from first hand experience. The next photo shows me with a nice trout taken during our trip. 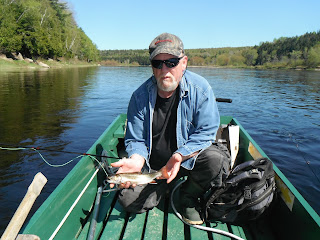 This past month also had striped bass making the headlines in the Newcastle-Miramichi area.This fishery is turning out to be a double edged sword for fishermen and outfitters is this area. On the one hand,the sheer numbers of stripers in the system is providing some fantastic fishing opportunities for young and old alike but salmon outfitters know their bread and butter is at stake here. Although these fish are providing lots of angling opportunities at an "in between" time ,they are also present at a time when the smolts are going to sea and they are just the right size for striper food and there have to be a lot of them getting eaten as they run the gauntlet past these voracious feeders on their way to the ocean. Hopefully the DFO has a handle on this situation and a balance can be struck between providing new fishing opportunities and protecting our very valuable salmon fishery.
The shad have been running hard for a couple of weeks now and fishermen are starting to catch them in the usual spots up river past my place. The 9th Annual Monte Farrell Shad Derby will be held on the coming week-end June 8th. Pre registration required and limited to fifty entries. Entry includes breakfast at the Queens County Inn to get the tournament started. There are some nice shad caught at this derby each year and if the conditions are right multiple hook-ups are possible. Try to get out for a fun day on Salmon River and it doesn't cost an arm and a leg to participate.
I"ve been seeing a lot of wild-life in my travels such as moose, deer, mink and lots of turkeys. We are on the verge of an official boost from the government and look for a stocking program in the very near future. There are lots of released birds in our area. They have been here for around ten years and are expanding their territory and that is a good thing. The next photo shows a flock of turkeys on RT 10 earlier this month, 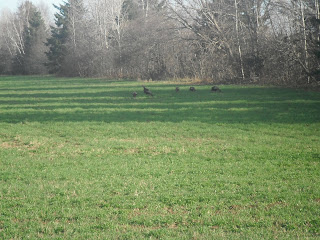 The last week has been blown out on all river systems in New \Brunswick with high water back to near spring levels. This has slowed things to a stand still around here but we're looking for good things in the coming month.

This is Dale Bauer saying "Happy Trails to You.....Until we Meet Again"