We have had some beautiful weather here at home on Salmon River this past month and most folks were happy to see it after the late, cold spring we had this year. We have been having a great time fishing, boating and camping around some of the beautiful spots close to home. Salmon River is a wonderful, diverse eco-system that empties into Grand Lake via Salmon Harbour. Ken and I are lucky to live on what we think is the nicest stretch of the river. We are located on the lower river and this is where the richest habitat is. This is because of the smaller tributaries that flow in creating broad, grassy meadows interspersed with small ponds. Many aquatic species call these spaces home. This is a photo taken from our shore looking over at Moon Island. 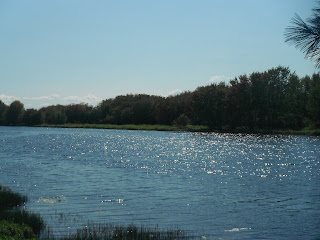 There are lots of photo opportunities around and it pays to keep a camera close at hand to capture those special moments. This next photo was taken behind a large white pine and looking down river from our place. 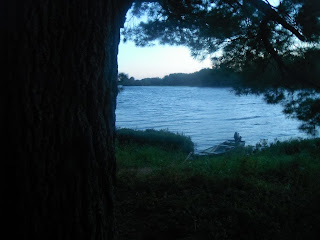 Ken and I, along with my son Curtis and Ken's nephews,  Dallas and Jamie have made some very nice camping spots over the years and family, friends and visitors all enjoy their time at these special spots. We set these campsites up with comfort in mind and we don't really think of it as "roughing it". I really like setting up a remote spot on a river or stream that doesn't get much traffic and taking in some of the splendor that is inherent in the old growth areas we prefer to use. This is what I think camping is all about. With the technology available to campers nowadays, there is no need in being uncomfortable. I always sleep like a baby in the woods. I remember a time many years ago when my Uncle Gowie and I were camping in the fall on the Pleasant Brook portage and he nearly scared me to death! We had settled in for the night and I quickly fell asleep. Uncle Gowie was sipping some beverage as a tonic to help him sleep and was also starting to doze off. All of a sudden Uncle Gowie grabbed me hard by the arm and bellowed '' What was that!'' I nearly came out of my skin and I asked him what was wrong. He said ''I felt something brush against the tent!'' I told him to calm down and listen and I thought I could hear something moving off. Uncle Gowie finally calmed down and I quickly went back to sleep. I don't think Uncle Gowie slept a wink that night and I discovered on that trip that poor, old Uncle Gowie was a little fearful sleeping out in the bush in a tent.
He must have been because he always had a good supply of tonic to calm his nerves at night and hopefully knock him out for a while. I still get a good chuckle whenever I think of that story.
This next photo is one of my Grandson Jackson. We had a big feed and Jack was having a good time and we all had a good laugh 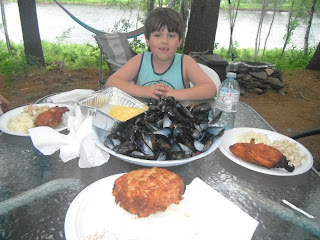 Jack is well known and loved by all in the village and was recently crowned '' Little Mr. Minto 2015 '' during this years Festival Days. And yes, he's a camper too! He met Ol' Wes Hargrove on the path going down to the boat launch and Wes asked him if he liked it up here and he said he sure did and that he came up every year! Wes got quite a chuckle out of Jacks enthusiasm and told him there was no nicer place around.
There was a strong run of gaspereau and shad up Salmon River this year,  with a few nights in June where the water was churning as far up and down the river as one could see. The annual Monte Farrell Shad Tournament was held again this year at it's usual time and was well attended. I didn't get any first hand reports but I did hear that there weren't many fish caught. Again, not sure who won with the few fish that were caught.
New Brunswick's salmon rivers are experiencing strong runs this year and that is good news after a couple of poor years in a row. There are lots of fish in the Miramichi system and although we just had a warm spell, much needed rain arrived to cool things off and get the fish moving again. There seems to be a good mix of both salmon and grilse and that bodes well for the overall health of the
Miramichi.

I finally got some time to hit one of my favorite trout streams and it was a great trip with some great company. Donna A. of Doaktown is an avid fisherwoman and nature lover. I might also add at this point that she is in very good physical condition! I have fished this small stream from start to finish over the past forty years and the stretch we fished is one of the best. It's a mile of beautiful, small pools that hold lots of pan sized brook trout. This photo shows Donna making her way up the stream. 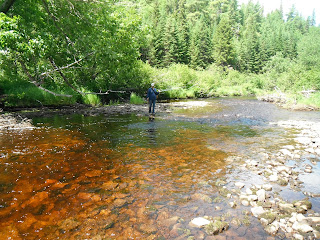 This photo shows one of the small brookies Donna caught that day. 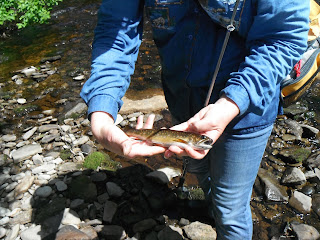 Here is a shot of a couple of the panners we caught that day. 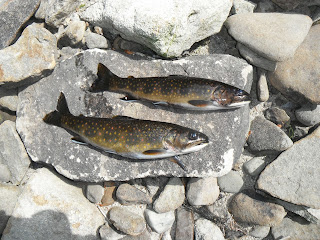 It was a beautiful day and Donna was amazed at how rugged and scenic our surroundings were. Even today, this spot doesn't get fished much because of the cliffs that must be navigated to access this little gem of a spot. The next photo shows me using my little fly rod. As usual, a small muddler with a red tail was tied on the business end. 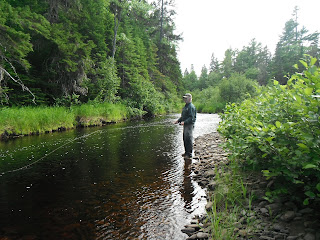 I caught about twenty or so of these little brook trout and kept five of the best ones for supper. 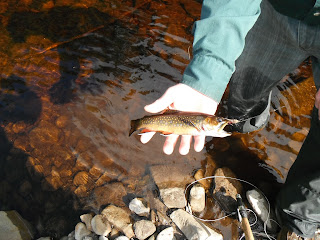 Donna was using spinning gear and caught about a dozen or so and she kept her five for supper also. 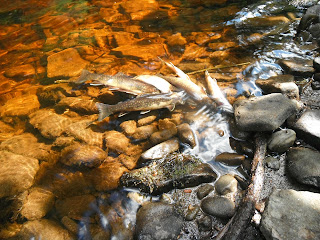 The next photo shows Donna holding our alder bush with the trout done up old school. 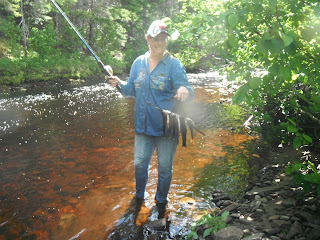 As I said earlier, this fish is not for the feint of heart. Rugged rock cliffs that aren't to far off of vertical going in and out but it makes for some great scenery at the same time. The next photo shows a large white pine growing out of one of the cliff faces. 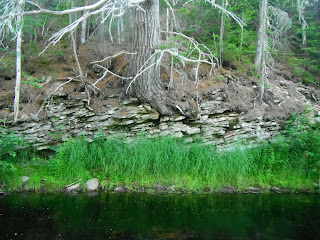 The next photo shows some beautiful wild flowers growing at the edge of the water. 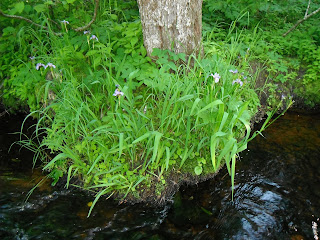 Even with the rugged terrain,  this was still a super day on the water and I don't think I'll wait too long before getting back in there.
This time of year we like to turn our attention to pickerel fishing because when the cold water species are shutting down the fishing for these toothy critters is heating up. We have a couple of killer spots close to home and we usually concentrate on those ones but there is lots of habitat on the lower Salmon River. I got a chance to get out with Kenny one evening for a short fish and the bite was hot in the lily pads. I didn't keep count but we must have hooked 40-50 fish in a couple of hours time. That's great entertainment any day you are into fishing like that. Ken caught the first fish. 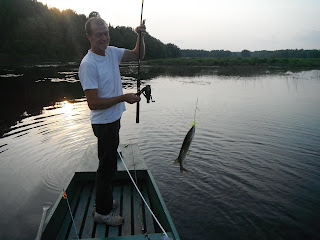 It didn't take me long to catch up to him because as soon as the lure hit the water the pickerel were attacking it. 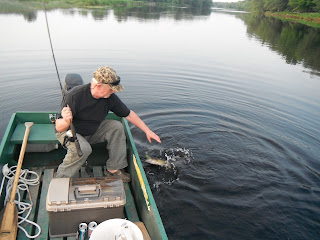 We got a few nice ones between 20-23 inches and these fish fought hard for their size. All hook and release that night. 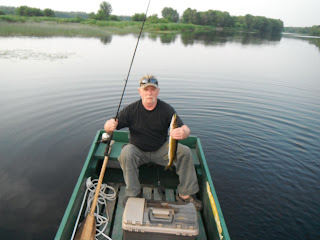 When we were packing it in for the night Kenny remarked he had forgotten how much fun fishing for pickerel is when the bite is on. I have to agree with him. It's a lot of fun! 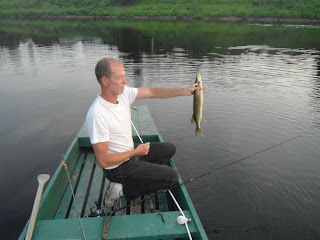 Ken likes to use a gold mepps with red feathers if he has one on hand. I prefer gold Hildebrandt's with a double tail jig on a weedless hook. Don't forget to use a leader or you could end up losing a lot of gear. The next photo shows my basic rig for fishing pickerel but I will use frogs and Top Props at times. 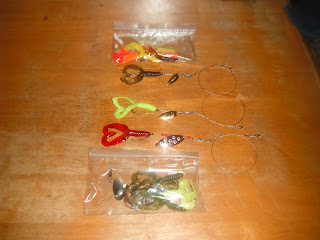 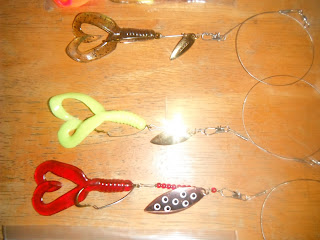 I always have an eye out for outdoor related items and have amassed quite a collection over the years. For some reason I get great pleasure out of finding and acquiring a variety of items from books and prints to ornaments and folk art. Not all the stuff I collect is old. If I like something, I won't hesitate to buy it, if the price is right. If I don't think something is a low enough price to make a profit, it stays there. I'll find out how good my strategy was when I retire in a few years.
One of the things I like the best that hangs on my wall is a paddle Kenny made for me. Ken said he wanted to try and make one so I said if it turned out I would buy it from him for a fair price. I went with him to the cabinet factory where we got birch,  maple and oak edgings. He selected and arranged these strips and laminated it into a board. After getting the rough board he planed it down to the thickness he wanted and cut out the rough shape of the paddle. After hours of hand work the paddle was carved and burned. He finished it off with six coats of varnish. The end result was a work of art and I will never use it or sell it. I asked Kenny why he never made another one and he said he couldn't get the money out of one to cover the labour that went into making one. He reminded me that the paddle is all hardwood which is much more difficult to work with. Here are some photo's of my paddle. 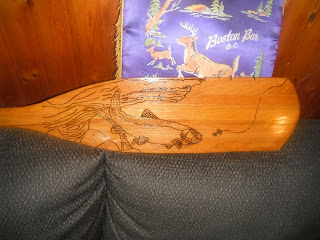 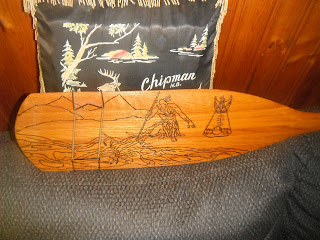 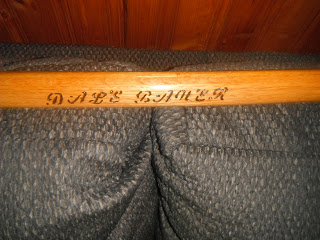 Kenny is a talented wood worker who mostly makes things for family as gifts but once in a while he has something for sale. If you like what you see, feel free to leave feedback and I will get back to you as soon as possible.
Until next time, this is Dale Bauer saying "Happy Trails to You....Until we Meet Again!"
at July 23, 2015 No comments: