SIGNS OF SPRING, THE BITE AND VINTAGE OUTDOOR STUFF

Last week, winter beat a hasty retreat here at home in the Grand Lake area. Record temperatures for a few days caused the ice to run in Salmon River starting on the 19th of March and that is quite early for this part of the province. The Saint John and Miramichi Rivers also seen the ice break up early in their respective waters. Those warm temperatures also brought some migrating birds back early and the deer are out in the fields grazing very early this year. The following photo shows the Miramichi River from the Priceville foot bridge.Note the large amount of thick ice cakes along the shore and on the flats. As I was making my rounds in the area,I noticed that all the intervales from Priceville to Doaktown were completely covered with ice. 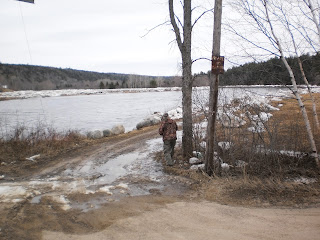 This will help keep the water temperatures cool,if the river doesn't flood and wash it all out. The water looked very good and I thought to myself the fishing would be good,if the season was only open. I find these early ice-outs nerve racking,especially an early run such as we had this year. The waiting and anticipation are almost too much to bear!
The conditions to the south are similar in the streams and rivers but the lakes and ponds are still iced in except for the edges and in the thoroughfares,where there is a current. The following photo shows the thoroughfare between Indian Lake and French Lake,looking towards French Lake. 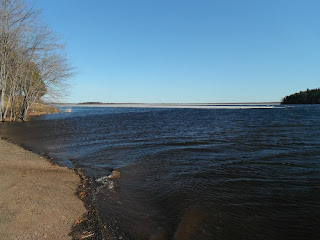 Although the lakes and big ponds are still iced in,the flooded puddles in the fields along the Saint John River are open and have been attracting a lot of ducks looking for feeding and resting areas. the next photo is one of a large flock of ducks lifting off of a flooded pond along the SJR. 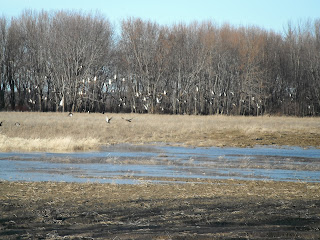 Along with all the ducks we are seeing,we are encouraged by the numbers of deer that are coming out to the fields in some of the better areas. The deer were blessed with an easy winter and an early spring so hunters can expect to see more yearlings and,if you are lucky,maybe one of those old brutes that survived for another year.I saw some fields with forty or so deer in them and others with varying amounts,again,depending on the location. The next photo shows a deer Ken snapped while out for a tour of Cox's Point which is close to Pioneer Lodge. He counted thirty-four deer while on his drive around the loop. 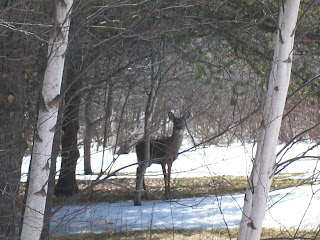 So as you can see,there is no shortage of wildlife responding to the beautiful weather we experienced last week. Although we had record breaking temperatures last week,this week things are back to normal values for this time of the year. The following is a short video clip of Salmon River I took during the break-up last week when we had the warm weather.
The spring salmon fishery is just weeks away and I am hopeful the fishing will be good. There was a tremendous run of fish last year in the Miramichi and her tributaries so there should be lots of fish around for anglers who look forward to the opener on April 15. Because of the early ice-out and low snow pack, anglers should look for low water conditions,running free of debris and relatively clear. This is all hinging on the amount of rainfall we receive leading up to the opener and a large rainfall could blow the whole river out. I know I'll be keeping my fingers crossed! Anglers should remember to downsize their hook size if we do get low,clear water conditions. The last few years I have been using Marabou flies with great success during this type of conditions. I also like the black ghost at times such as these. The following photo shows some of the popular marabou patterns. 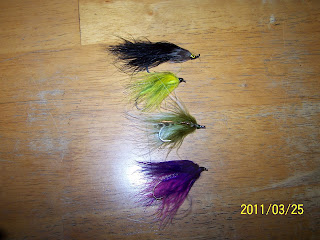 If you are thinking of fishing the Doaktown or Boistown areas, you would do well to time your trip for the first week of the season because if things hold true to form,the fishing will likely start to drop off after the second week. Fishermen should also look for the runs of sea -trout earlier this year,from the 1st of May on,especially in the lower river. Last year there were some very large sea trout taken. Dusty B. of Doaktown landed a beautiful brookie of seven pounds and some other fishermen were hooking four and five pounders around the same time.
Looking forward, the run of white perch which normally passes up through Chipman around the first of June,will like probably be starting a little early. This is a great fishery that provides lots of action along with some great tasting fillets for the pan. We will be looking for these fish along about the third week in May. These fish run in large schools and they will hold up in the deep holes and any place where a brook runs into the river. If you catch one,hang onto your hat because there are usually a lot of others travelling along with the school and when the bite is on it is quite easy to limit out on these delicious members of the perch family. 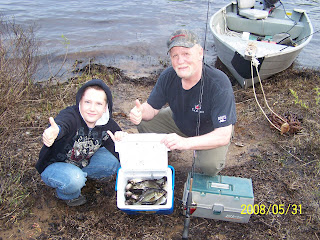 This photo shows me and my grand-son with a bucket of white perch we caught a few years back.The kids just love fishing for this species because there is usually lots of catching with very little effort on the part of the angler.
Before I end this bit of blog in my usual fashion,I would like to point out to my readers an incident which took place recently on the upper Cains River. Kieth Wilson,a salmon outfitter who operates out of MacNamee on the Miramichi and has a camp at Wildcat Brook on the Cains,is outraged by a recent cut in the crown reserve area of the Cains River. Now before I go any further,let me say that Keith is not a fanatical tree hugger who screams bloody blue murder every time a tree gets cut. Like most other New Brunswickers,he would like to see some balance restored to the way Big Business operates in our forests. We New Brunswickers are well past the stage where it's all take and no give when it comes to our forests and it's time for the government and Big Business to wake up and smell the roses. People are no longer content to sit back and watch our environment be destroyed by greed. There is no more hiding in the shadows because there are too many cameras and cell phones connected to the Internet that will get a message out there to the world,whether that message is a good news story or,as in Kieth's case, a story of a cut that never should have happened anywhere,let alone on the banks of a world class blue ribbon stream like the Cains. Please follow this link http://www.wilsonscamps.nb.ca/ and scroll down to the video clips Kieth has put on his web site. If you don't like what you see in these clips,get vocal and pass this link on to other concerned citizens and organizations. Good job Kieth! I would like to point out that Kieth is between a rock and a hard place but he had the guts to follow his convictions on this issue and is to be commended for sticking his neck out in the name of conservation.
With the better weather now upon us,it is a good time to be on the look-out for some nice vintage outdoor stuff that shows up at yard sales and auctions around the province. I usually manage to find something in my travels and I have pickers looking for items I might be interested so I am constantly adding to my growing collection of outdoor related stuff. The next photo shows another black panther ornament I recently acquired. These ornaments come in all sizes and this one happens to be a larger one,being around twelve inches long. 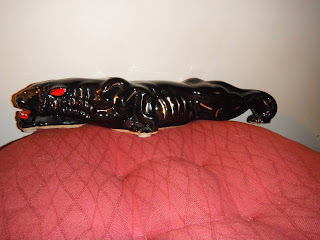 As you can see,the paint is very good and there is very little loss due to cleaning and handling. This item was manufactured in Japan during the late Fifties and early Sixties.
The next item shown is a small jar I picked up in an unlikely place and this little gem proves to me that you don't know where you are going to find a small treasure such as this. The next photo shows a small covered jar that I purchased at Value Village in Fredericton. This jar is quite small and features foraging Pine Siskins as decorations. This jar caught my attention because these little birds are a common visitor to the large pine trees I have in my yard and I enjoy watching them. This jar was made at one of the premier potteries in England called Royal Worcester and was probably produced during the Sixties. 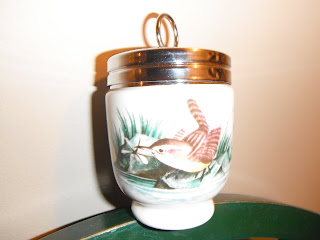 I would encourage any readers who are contemplating a trip to the Grand Lake area and would like to spend some time outdoors to give me a call because we have some of the best guides in the area on our team. We guide for all native species of game fish and animals as well as other wildlife that inhabit the woods and waters of the Grand Lake area. The Pioneer Lodge provides some great accommodations and meals near Grand Lake for visiting guests or you can camp at our campground or stay at the local motel here in town if you prefer to be closer to civilization.
In closing, this is Dale Bauer saying 'Happy Trails to You......Until we Meet Again!
at March 30, 2012 No comments: