Hunting season is winding down. 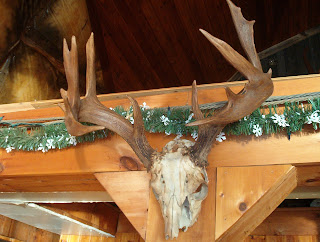 By all accounts,it has been a pretty good hunting season this year. There were lots of ducks and geese to keep everyone who was out there into some good shooting.The moose hunt was a great success for most hunters lucky enough to draw a tag.There were several nice bulls shot in our area. The deer hunt this year was considered a great success for most hunters who participated.Although we took a couple of smaller bucks,a seven point and a nice little eight,we couldn't quite connect on those big one's we were chasing around the last week of the season. Kenny had a beautiful ten point buck with ivory tips on his horns walk out behind him and was gone before he could get the shot. Duane,from Fredericton,joined us on the last week to try to take a huge buck whose weight would be over 250 lbs. dressed. He was in the right place,but again, the big buck got by him and was gone before he could get the shot .It was right at dark and the light was very poor,so I guess he had a pretty good excuse. The rut was late again this year and a lot of the really big bucks survived another year simply because they wern't fevered up and travelling around very much. All the biggest bucks were just getting going good when the season ended.All our areas were showing heavy buck activity in the week after the season ended.This bodes well for next season as we were hunting about a dozen really big bucks that survived the hunting season. The photo for this post is from one of the areas we hunt that is known to hold bucks with a lot of mass . Kenney and Jamie were out for a rabbit hunt and managed to bag an even dozen as well as two grouse.The rabbit population is high this year,so it's not a problem to get a bunch of them. This is great fun and you don't need a dog because there are so many of them. So there are some good hunts to be had yet for those who still want to get out before we settle into some serious ice fishing on Grand Lake!
at November 29, 2007 No comments: 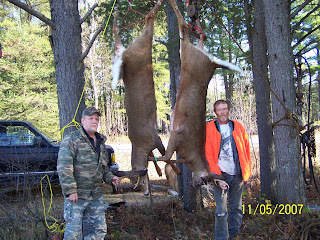 I finally finished up with other business I had to take care of for the last six weeks so Kenny and I hit the woods hard last week and we both got lucky! I decided to take a young basket -racked seven pointer on Friday Nov.2. This young buck will be great eating,that along with the fact I will be going back to work any-time,convinced me that I would be foolish waiting for one of the monsters we have been dogging. There are some really nice bucks running around out there! On Nov.3,Kenny was out with the old -timer,Wes Hargrove,when Kenny pointed out a nice buck sauntering down a logging road in the pouring rain! Well the old boy stepped out and dropped that buck right there in the trail! Wes was quite happey with his buck because when you get past seventy-five your chances of tagging one get less and less each year! So we are into the third week of the season and we have two hanging on the pole already,with the rest of the croud coming over the next two weeks ,we are almost sure to have some big ol' brutes joining the one's already hanging. I will be posting more pictures and results as they become available. On another note,I watched two natives take a twelve point bull moose on Oct.30. These guys were really rigged up for moose hunting and they got the job done in a hurry! This was in zone 17. There are certainly many more moose in zone 17 than there are deer,but not so many that you can take too many.The native harvest is pretty much self-regulated,so lets hope they use some common sense in how many animals they take. I also had an encounter with a pine martin,a species which has been very rare in southern New Brunswick. It was the first one I had seen in the wild in all my years,so I was really thrilled to see one.And he was up close and personal,so I got a really good look at him. He was a really beautiful animal with a reddish-golden pelt and a small fox-like face. I saw the usual bunches of does and kids,as well as a couple of spikers.So there are some fair numbers of deer around for any sports who are looking for a nice buck,so we hope to see you out there in the Big Woods of New Brunswick over the next couple of weeks!
at November 05, 2007 No comments: