Good salmon fishing on the Miramichi 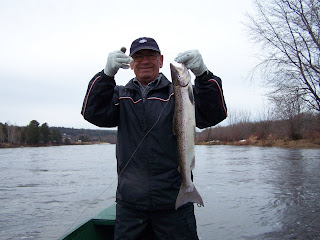 Last week saw some great fishing on the Miramichi River. Locals and American Sports alike were hooking fish on a regular basis from Wednesday on after the raise of water and the ice up river had run. There are some nice salmon in the 30" to 38" range being hooked on each outing.The weather has been rather cold,but that isn't necessarily a bad thing as far as fishing goes. The salmon will stay put until the water starts to warm up and until then you can expect good, consistent fishing. All sports had better make sure to dress warmly and include rain gear when you pack because it can get quite chilly out there! With the rather late start to the spring fishery this year,we are expecting good fishing right into the middle of May.Leroy A.,a local guide,caught a nice 18" brook trout on the week-end,but had to let it go because of the May1st opener. Oh well,maybe next time. Allen D.,friend and guide,is seen in the photo landing a nice grilse. Allen released this fish to fight another day. All in all,it has been a pretty good start to the season and we hope to see you out there fishing the great Atlantic salmon and experiencing the Miramichi River and all it's splendour!
at April 30, 2007 No comments:

Still lots of ice in the main SW Miramichi 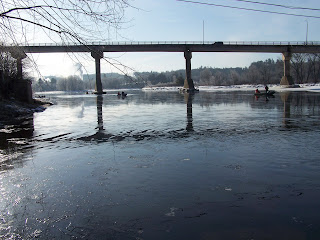 The first day of spring salmon fishing in the Doaktown area can best be described as unusual. This type of river conditions has not been seen in recent memory for most people. Up river from Doaktown there is still long stretches of water with solid ice and the open water around Doaktown is unusually low. That being said,the fishing wasn't too bad the first day. Many sports caught a few fish with guides who were brave enough to risk breaking props. The fish were laying in the middle of the river because that was the only place there was any water. All week it was the same story,half decent fishing in the morning using small darker colored flies,then raising water with ice running in the afternoon and tough fishing. We are hoping by the middle of this week the water will be a little higher and maybe the ice will let go.At least then the guides and their sports can spread out some on the river.This past week there were sixteen sports crammed into the open water around the bridges at Doaktown and next week there are eighteen scheduled to fish.This can sometimes cause tempers to flair with all the jockying for position.There isn't much point in trying to move around much because there just isn't enough room! Most of the guides were just getting their spot and staying put. There should still be some good fishing in the coming weeks as the fish move down river when the ice moves. So come on down and tie into an Atlantic Salmon! You'll be hooked forever!
at April 22, 2007 No comments:

Still lots of ice in the Miramichi River 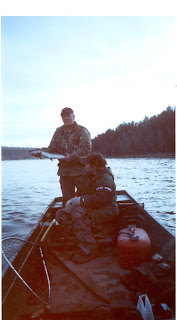 The opening day of April 15th on Sunday is coming right up and there is still lots of ice in the Miramichi. This is kind of a bummer,but you can't argue with Mother Nature. Salmon River is pretty well free of ice,except for the back guts and channels. The weather is supposed to turn wet this week-end and that could cause a raise of water which could move the ice out. To put a positive spin on these circumstances,I like to say it just gives us more time to prepare for our annual trip to Doaktown and the terrific fishing that awaits us on the famous Miramichi. This year we should see a lot more large salmon caught as there was a mighty run of salmon last fall. With the additional fish in the river ,this should add up to some great fishing right into May. Hope to see all you dedicated fishermen there! I'll be posting again to let our readers see the results of the first few days of fishing.Until then,tight lines and Good Luck!
at April 11, 2007 No comments: