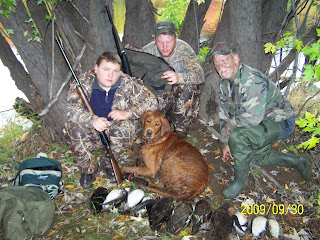 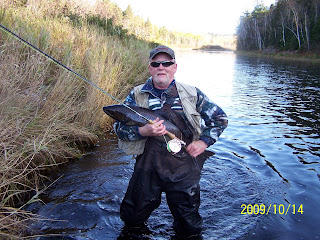 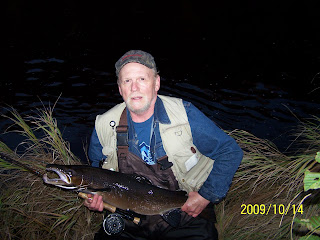 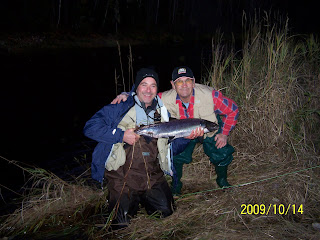 We are now done fishing salmon and trout for the year and what a glorious ending we had to the season! As usual,we finished up on the Cains River and once again,we were not disappointed! There is only one other place that comes close to the experience of fishing the Cains River in the fall and that might be fishing in the Cape Breton highlands in Nova Scotia. But here in New Brunswick,the Cains is the place to be in October. Not only is the fishing world-class,but the scenery,with the fall foilage in all it's splendor,is absolutely beautiful. My good friend and fellow guide,Allen Davidson,and I fished the last two days of the season and had some very good luck. Shawn B. of Fredericton also shared some of that luck as you can see in the photo of Shawn and Allen with his 15lb.+ hen salmon.I had just released a nice hook-bill about the same size when Shawn hooked his salmon. I must say,I have never had a salmon fight like that big hook-bill! It just wouldn't stop jumping! I know it jumped at least a dozen times and maybe more.I was holding him quite tight and that may have made him jump more than usual,but whatever the reason,that fish gave me the fight of a life-time! 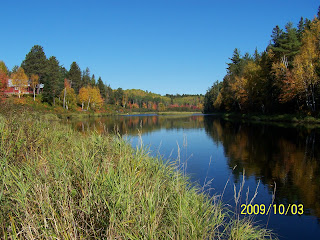 Shawn and I got these two salmon on the day


before the closing. I returned the next day and landed two more hen salmon almost identical to the one Shawn got the previous night.all these fish were taken on a relatively new pattern called a Slime.These flies are tied with maribou feathers and there is something about the undulating movement of this fly that causes salmon to strike very aggressively when presented properly.Many fishermen were bemoaning the fact that there wasn't as many fish as last year,but there were good numbers of large salmon present and these salmon are a little fussier than a grilse and the Slime is just the ticket for them.I might mention that these fish had been fished over by a few different fishermen and they would only come to the slime. I know my fly box will always have several on hand for use in the fall when those big hook-bills get moving up river to spawn. The two patterns I used were a Pumpkin and a Fireball. A big bonus when fishing fall salmon on the Cains is the fact you usually catch some very nice trout while fishing. This is usually enough to keep even the most jaded of fishermen interested in pounding the water.I got a nice one of about sixteen inches and a few smaller ones as well. We also had a great opening day for ducks.I shot with Jamie and Dallas,as I mentioned in a previous post and we had a great time on the marsh with the three of us taking seventeen ducks.Whiskey,Jamie's Golden Retriever, fetched up all of the birds and did a great job finding the ones in the grass.I must confess,I had my hands full trying to keep up with these two young fellas! Talk about quick reflexes and straight shooters! We sure had a great day and I'm looking forward to shooting with these boys again next year. We are setting up for our deer hunts now and although we will be concentrating on the last two weeks of the season,we will be getting out and hunting over bait for the first two weeks. We are changing our hunting area and are travelling further to the southern end of Grand Lake.Our deer herd on the crown land have taken a beating lately and I will be commenting on this in future posts.I will have some photos of some nice bucks in my next post,including Dwayne Hargroves' two biggest bucks. It's still not too late to book a hunt for white-tails this year,so if any of my readers would like to get out and about,just shoot me an e-mail or give me a call and we'll get right to it!
at October 28, 2009 No comments: