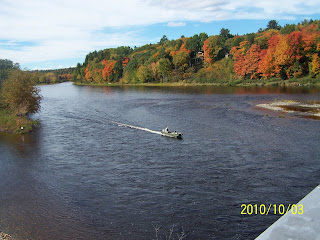 A photo taken from the Priceville Bridge last fall.
Summer is slowly winding down here at home on Salmon River and the large volume of water we have continues to play havoc with our outdoor excursions. I'm not going to complain about this situation because I would much rather see lots of water in our river systems than a drought. It has really helped the salmon and trout stocks but it has made it much harder to catch the warm water species such as pickerel. With the high water we have this summer,the top water lures have not been working as well and we have found that good sized spoons will work much better but you will have to try and cover  more water because the fish are spread out over a much wider area. Although the water conditions continue to be excellent for the salmon and their pursuers,the catching has dropped off this month because many of the fish have been in the system for a while and they tend to get a little fussy on the take. 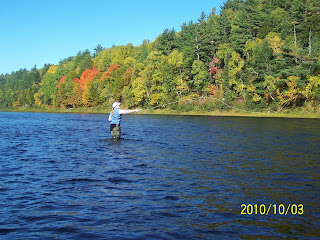 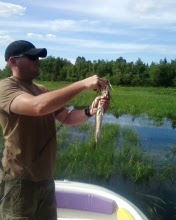 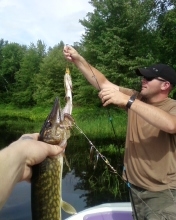 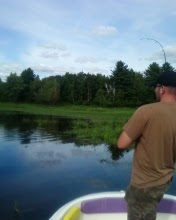 Sgt. Cain did a tour of Afgahanistan recently and I was amazed at the level of maturity this young man showed.He said he had a great time and he     would be back again soon for another day out on the water.Ken was also out guiding a young couple from Collingwood,Ontario. Lucas Parker and his lovely girl-friend were vacationing in the area and wanted to do some trout fishing and Lucas's girlfriend really wanted to see a moose.Ken told them he knew a spot where they could catch some pan-sized brookies and probably see a moose during the trip. They packed up lunch and all their gear and headed for the upper Gaspereau River. After fishing a few spots and catching some nice brookies up to twelve inches long,Ken took them to a spot on the Gaspereau that has a lot of moose and sure enough,he rounded a turn and there was a nice ten point bull moose standing off in the clear cut.This young bull was quite co-operative and stood around and let Lucas walk up on him and he got some great video footage. A short time later,three bears ran across the road in front of them,so Lucas'girlfriend got to see some animals up close and personal. After landing back home and having a nice lunch,it was time to sit back for a bit and just relax a bit with your favorite beverage and reflect back on the days events. Both Lucas and his girlfriend said they had a great time and they thanked Ken and told him they would try to be back again next year.Unfortunately,Lucas' girlfriend was running the camera and the video footage and photos went back to Ontario with her but if I get it sent to me,I'll edit this post and insert the footage and photos of their trip.
We have started to do some scouting for the up-coming moose hunt and the signs and numbers of moose we are seeing is encouraging. There is certainly no shortage of nice bulls in zone 18,where Ol' Wes hargrove has his tag. We have three very good spots within an area of about 50 sq.mi. and we will call and travel between the spots until Wes gets the shot. There are some real trophy bulls travelling in our area but I would expect we will see a younger satillite bull coming in to the call. Then again,if lady luck is with us and we hunt hard, Wes could be pulling down on one of those big old bulls that we know hang around in our chosen hunting area. We are all getting excited and we will do everything possible to get a nice moose in front of Wes. We may have another tag for our zone if Duane Hargroves son-in-law isn't training for a new exercise in the Canadian Armed Forces. We're keeping our fingers crossed in hopes that the young fellow can get the leave. We'll scout as if he is coming and the worst that can happen is we will have more spots for Wes to check out. I'll be sure to get lots of footage and photos of our moose hunt and I will include them in my next post in September.
The annual duck hunt follows close on the heals of the moose hunt and Jamie has been at me to get out to the marsh and look things over. Every year it is the same ritual.Jamie and Dallas chomping at the bit to get out in the marsh and slog around seeing what we have for ducks. And me saying"What's the rush? We can just sit down front on the beach and watch the flights in the evening to see what's coming and going and what kind of numbers we have''. Then the boys will usually humor me and sit for a few nights and watch the flights as they come in to feed. I've participated in this little ritual for the last twenty-five years I've lived here on Salmon River and I never tire of it.Hopefully,we will be doing it for many years to come because we really have a great time on our duck hunts.From the look of things,there should be lots of birds around because there was lots of water during the nesting period and all summer, for that matter. We have a couple of flocks of geese practically feeding in the yard and we will have to get our neighbour, Floyd,to cut his field just before the opener to try and keep them in the area.We usually get a crack at them and I would expect this year will be no different. This photo shows me walking the island near our hunting spot on the first day last year. 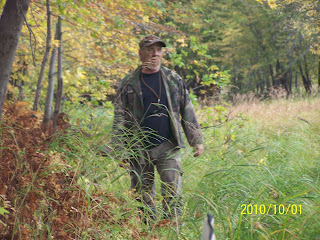 I have some nice little vintage items to show my readers this month and there is no shortage of goods out there,if you go to the right spots. One of these spots is the annual Flea Market in Sussex that was held recently. I always find tons of stuff at this sale and my main problem is being able to carry the stuff around for half the day! One of the items I found this year was a very nice vintage fishing board game called''HOOK-EM!'' It has great graphics and is in very good condition for the year,which is 1947.Here is a photo of that game. 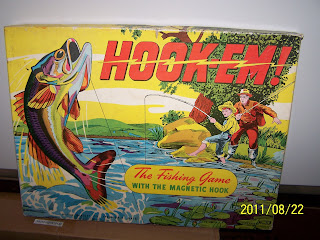 I collect all kinds of board games but I don't come across hunting and fishing board games so I was very happy to get this item.
The next item shown is a nice trout planter or nick-nack holder.This item is called lustre ware because of the shiney wet looking finish applied to the pottery. This piece was made in Japan in the 50's and is marked Shafford,hand- painted. 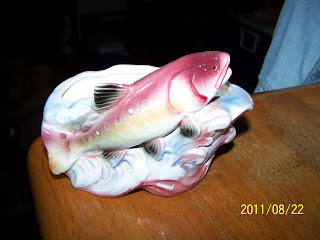 The last item I have to show is a pair of duck book-ends. These book-ends were also made in Japan in the late 50's or early 60's and is marked ESD,hand-painted. What I really like about these book-ends is the super condition they are in considering the type of paint and the delicate construction.The paint on this type of item has a tendency to flake and it is prone to chipping because it is quite fragile. 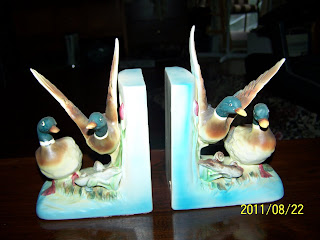 In closing for now,this is Dale Bauer saying ''Happy Trails to You,Until we meet Again!''
at August 22, 2011 No comments: