This past month has been a wild and woolly one here at home on Salmon River. Hurricane Arthur hit the Maritimes with a vengeance and the Fredericton - Grand Lake areas were hit particularly hard. A storm of this magnitude has the capacity to stagger local economies and inflict untold damage to the lives of the people suffer through it. People who live in this day and age are not used to going for days on end without power or land lines for communication. I personally was without power for eleven days and had no computer or home phone for three weeks. Needless to say, it's times like this that stretch ones patience and resources to the limit. I literally had to cut my way out of my yard to reach the highway. On the day of the storm I travelled to Fredericton and it was one of the wildest rides I have taken in my life! There were leaves and branches flying everywhere and trees, large and small, were falling like matchsticks in the wake of the hurricane force winds. Make no mistake about it, this was a very destructive storm.
This storm pretty much shut down our fishing and boating activities on Salmon River this month because of high water and dangerous conditions for travelling. I made a short video clip of the conditions we faced the day after the storm and as you can see the water was very high and flooding was widespread.

We never did get rolling after this huge storm but my son Curtis was up this past week-end and wanted to see if any fish were around and he managed to catch a few nice white perch that were still here. Here is a photo of Curt with a nice sized perch he caught while fishing off of my shore. 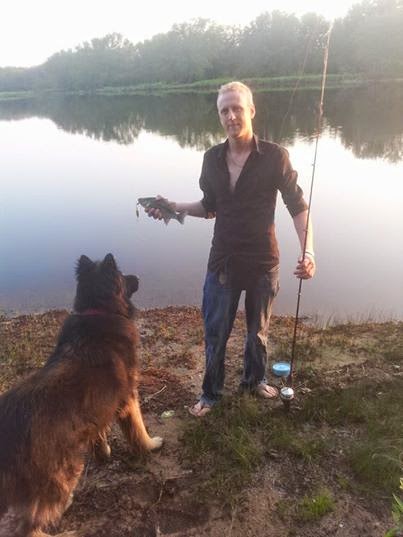 We had a nice fire later on and Curt cooked up the fillets on the coals in tin foil. Very tasty! This is quite late in the year to be catching white perch but this has been a very unusual year in many ways because of weather events and many folks are saying this is likely to become the norm as we move forward into the future. Hopefully, those people are wrong but I fear there is an element of truth to that statement. This is going to be a short post this month because of all the havoc caused by " Arthur " but next month I will get up to speed,  barring another act of God.
I did manage to pick up some outdoor related items in my travels around Grand Lake and the first photo shows a unique painting done on velvet. This painting depicts a duck in flight and is signed by the artist. These paintings are usually done on black velvet but this one is done on gold colored velvet which makes it unusual. 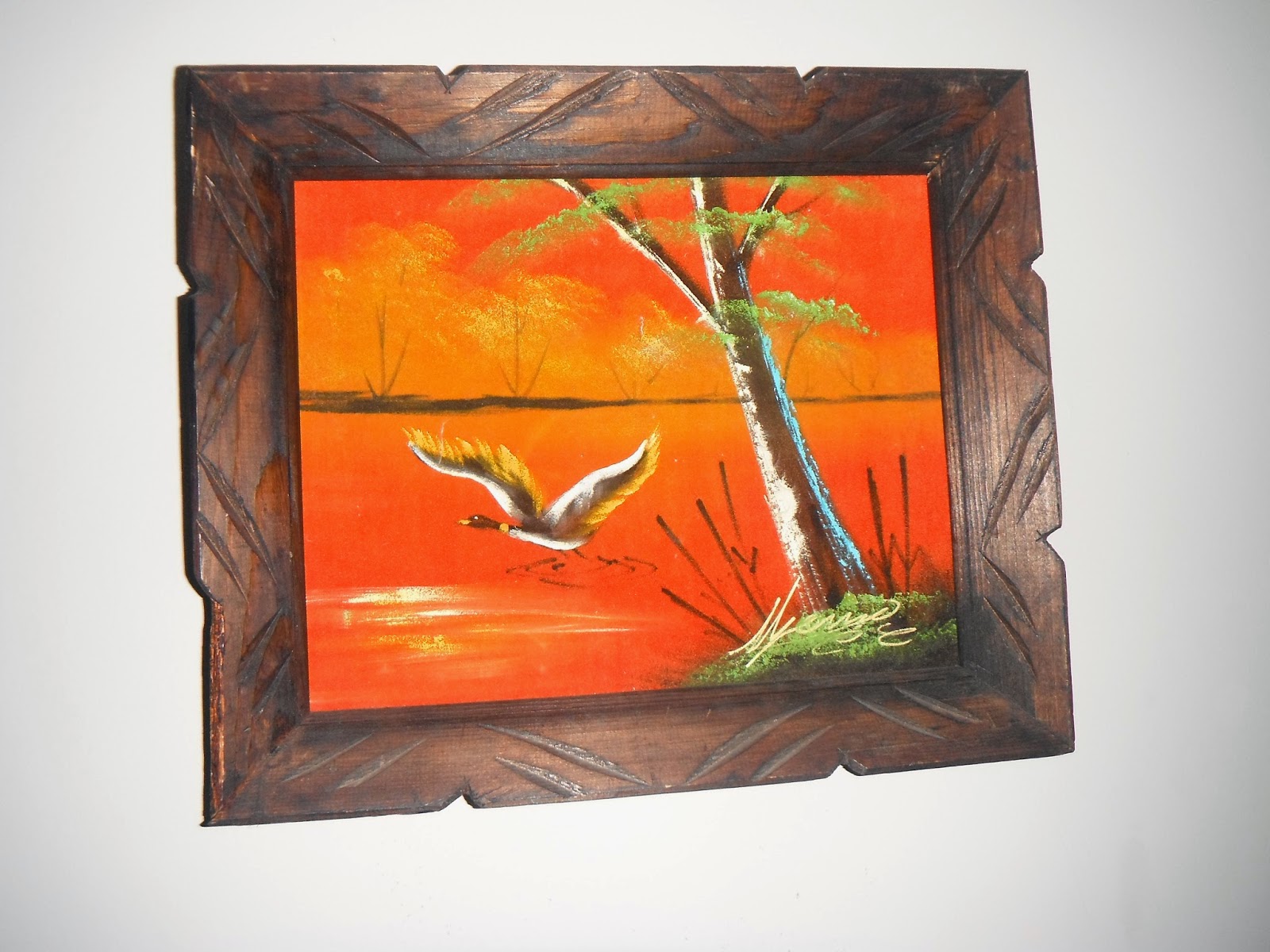 This painting is likely Mexican in origin and I'm guessing it was done in the 70's.
The next item shown here is a very nice picture done with different inlaid wood made to depict a mallard in flight. This item is a commemorative Ducks Unlimited piece and was done with over a dozen different species of wood from many different countries. 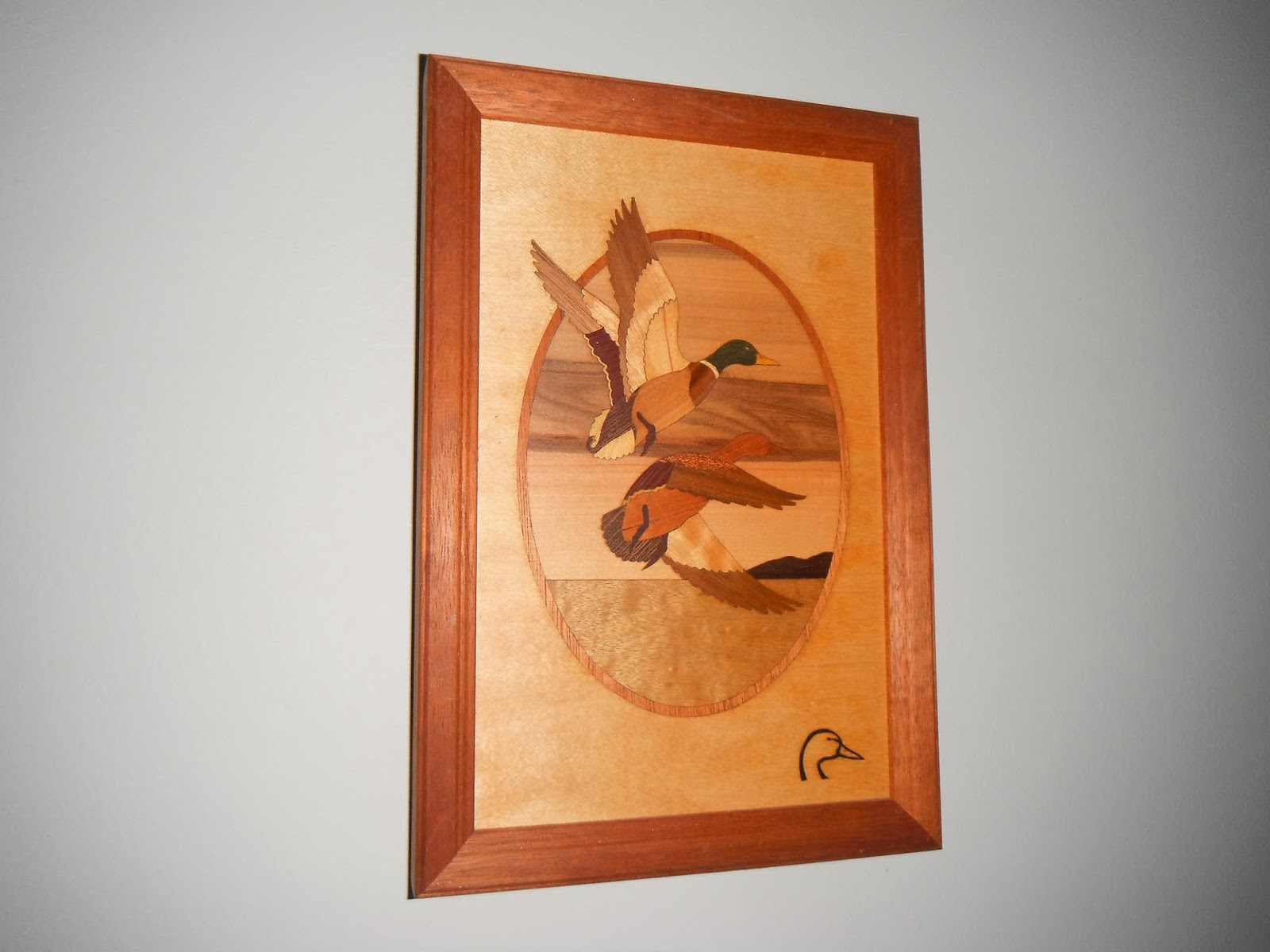 This beautiful piece of art work was done by Hudson River Inlay and dates to the 80's.
Lastly, I have a nice scroll carved piece of a jumping fish with a small clock inserted for function. There is a lot of detail in this piece and while it isn't very old, it's still a very nice little item. 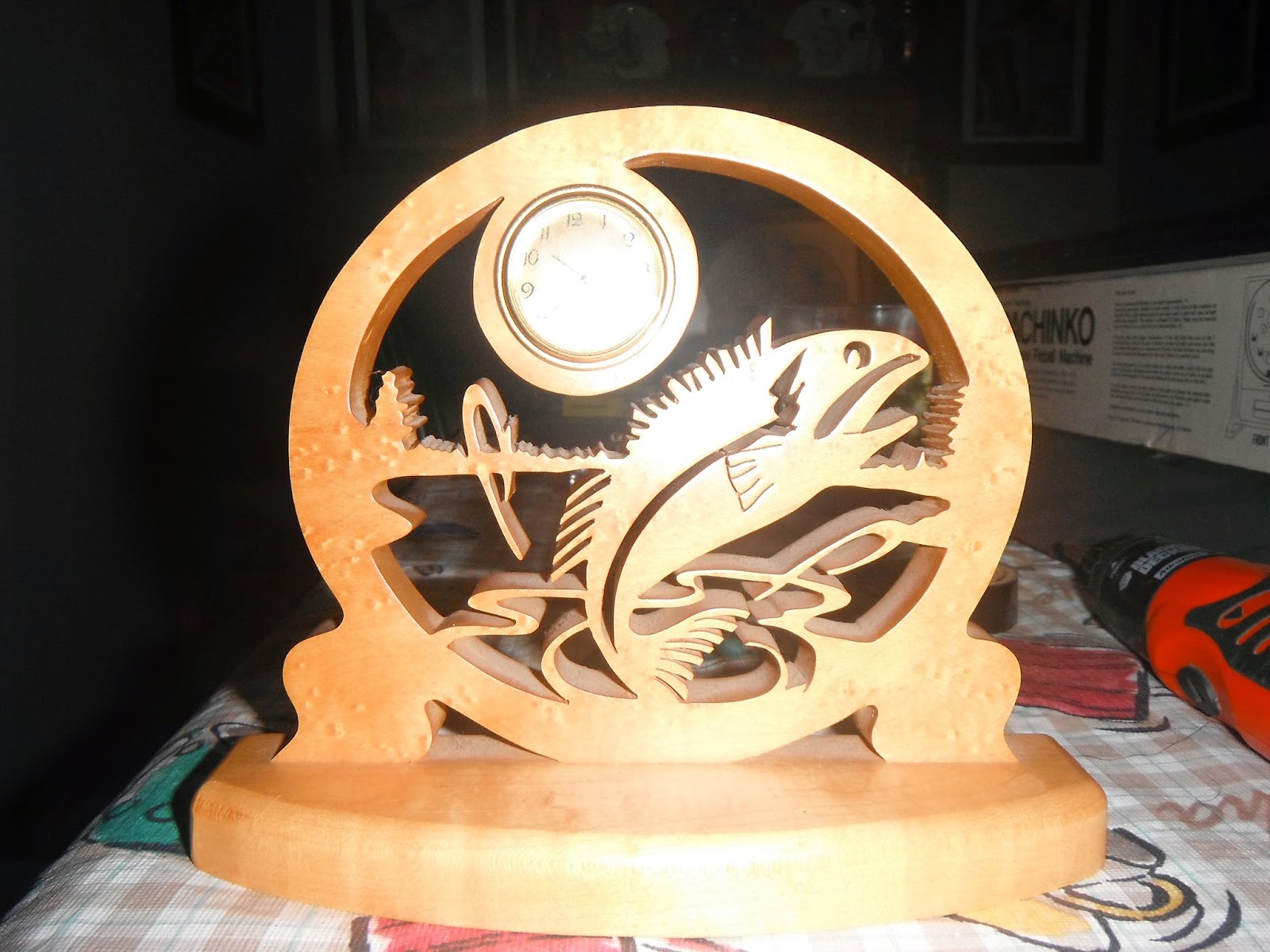 Although this post is quite short, I hope to have a much more comprehensive report next month if Mother Nature co-operates.
Until then, this is Dale Bauer saying " Happy Trails to You.....Until we Meet Again "
at July 28, 2014 No comments: