The 2014 deer season has just ended and as usual there were some great New Brunswick deer killed. There were also many hunters who failed to tag a deer. Again, nothing unusual there. One aspect of this years hunt that was a little  unusual was the presence of snow for a good portion of the season. Snow and cool weather always favor deer hunters pursuing whitetails. Sign is much easier to read and the colder weather helps get the deer moving. This invariably helps boost success rates for hunters and is always welcomed by enthusiasts of this great sport.
Overall, our group had pretty good success this year although we didn't connect on two trophy bucks we were after. One was a beautiful ten point buck that was literally in our back yard and the other was a nice twelve or fourteen point that was rubbing eight inch diameter cedar trees. This buck was also very close to home,  just on the outskirts of town.
As usual, Jamie managed to connect with a nice eight point that he spotted on the edge of a clear-cut. Jamie is a VERY good shot and he killed this deer at three hundred yards, off hand AND off his wrong shoulder! That's some shooting! This photo shows Jamie posing with his young daughter and this years buck. 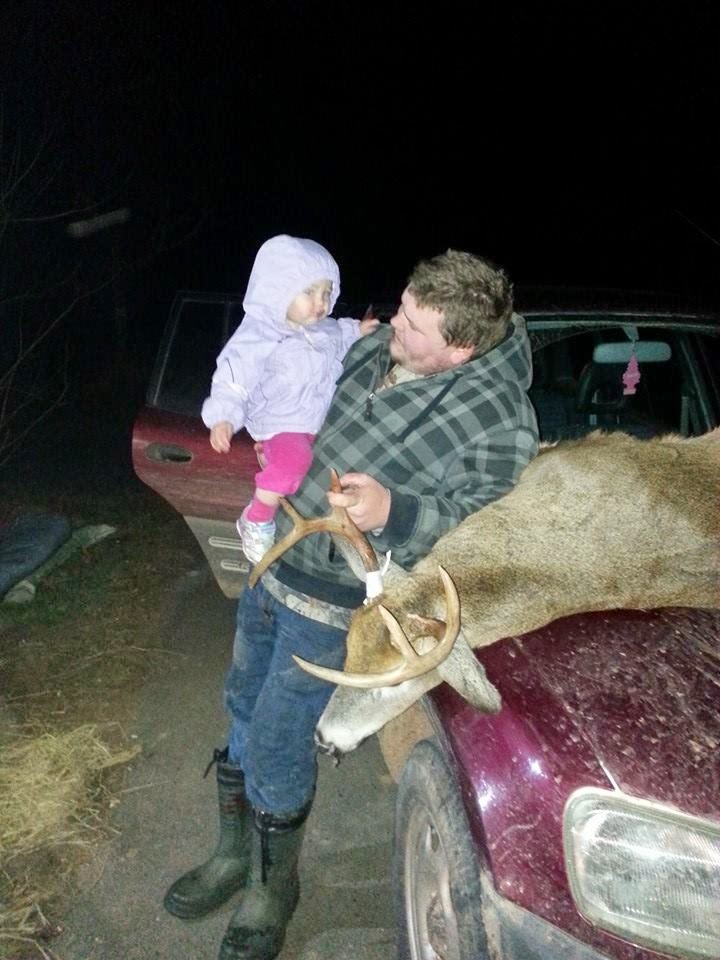 Jamie didn't get this buck weighed but it was rough guessed at around 170-180 lbs. field dressed. We figured this buck to be 3.5 years old and not quite in his prime yet. Still, a nice buck for this part of the country. Unfortunately, I didn't get the pictures of the eight point buck that Wes tagged or Kenny's spike buck that he took. The closest I came to a deer was a small button buck that nearly jumped in my lap after |I put some doe in heat scent out and doe called using only my mouth. Moments after I called, I seen a patch of brown fur bounding through the woods towards me and stopping within ten yards of where I was sitting. That little buck had some surprised look on his face! He milled around for a bit playing peek-a-boo with me and then trotted off in the direction he had come. That was almost as much fun as actually pulling the trigger on one.
Let me say right here that I am a strong advocate of the old fashioned deer bleat that New Brunswick deer hunters carried for years while hunting. I believe this doe call to be much more effective at bringing in both bucks AND does when conditions are right. Seeing is believing and I have called in ten times as many deer with a bleat rather than a grunt call. But, each to his own.
Some local hunters were successful this past season. My neighbor and old friend Rodney L. took a nice eight point buck in his back pasture and another buddy, Sheldon W. took a dandy ten point buck that dressed out at 224 lbs. from his fathers property in Coal Creek. I didn't get the photos of his buck but after seeing the pictures on someone's phone I can tell you that Sheldon's buck was a dandy! There was an even bigger one on his trail cam that he couldn't catch in the daylight. He told me he is already preparing for next year! I did get photos of buddy Trevor Trails nice buck he killed near his food plot in Dufferen. Trevor told me he had quite an ordeal getting his tag on this buck. Seems he didn't want to stay down so Trevor said he was a little heavy with lead when he finally did go down. Here is a photo of Trevor's 2014 buck. 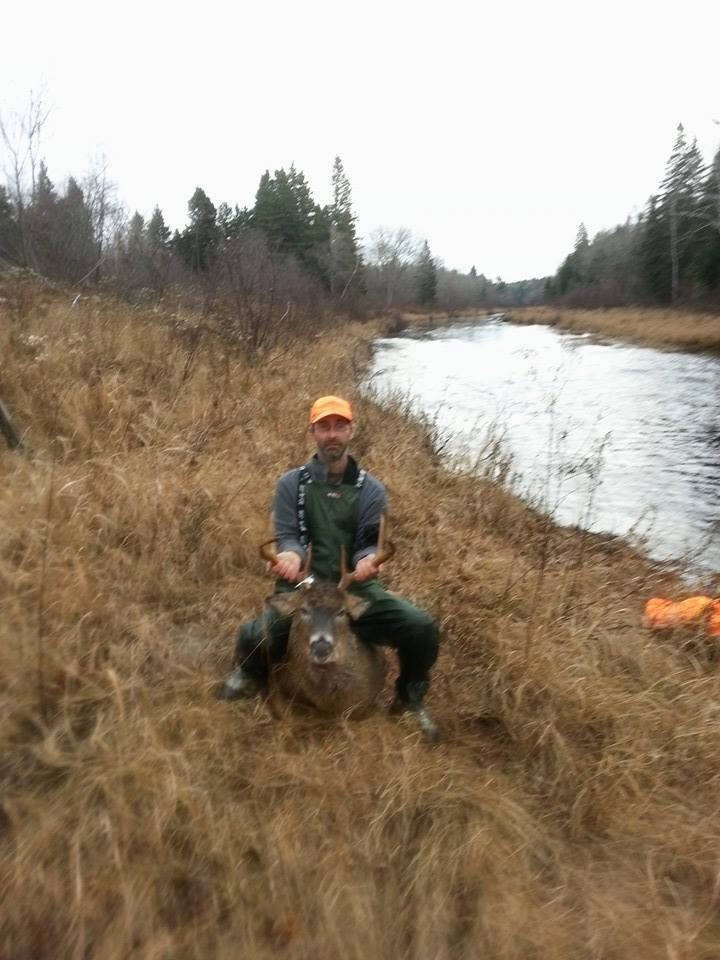 This buck sported a nine point rack and dressed out at 198 lbs. A very respectable mature buck for this country. I don't have the official numbers from the DNR on this years deer hunt but I'm guessing somewhere south of 7,000. Don't forget, this years harvest numbers will be skewed higher than normal because of having snow and cool weather during half of the season. Last year the kill was 8,161 so I think if we got at least 7,000 after that long winter we had last year, we will be doing good. Poor old deer have everything going against them in this country.
Each year I try to show readers of my blog some of the great bucks that our resident white-tail hunters take. I like to get photos of trophy bucks but sometimes you get a photo of a trophy like this next one. 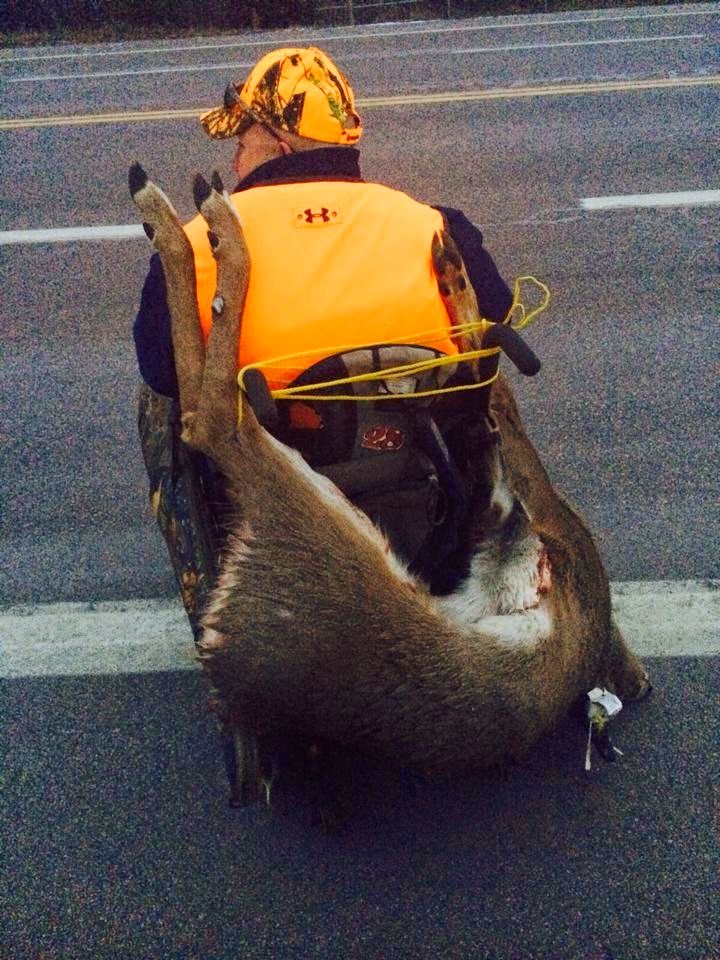 This disabled hunter from eastern New Brunswick shows how to get it done. This hunter took a spike buck and most people would agree THATS a trophy buck! 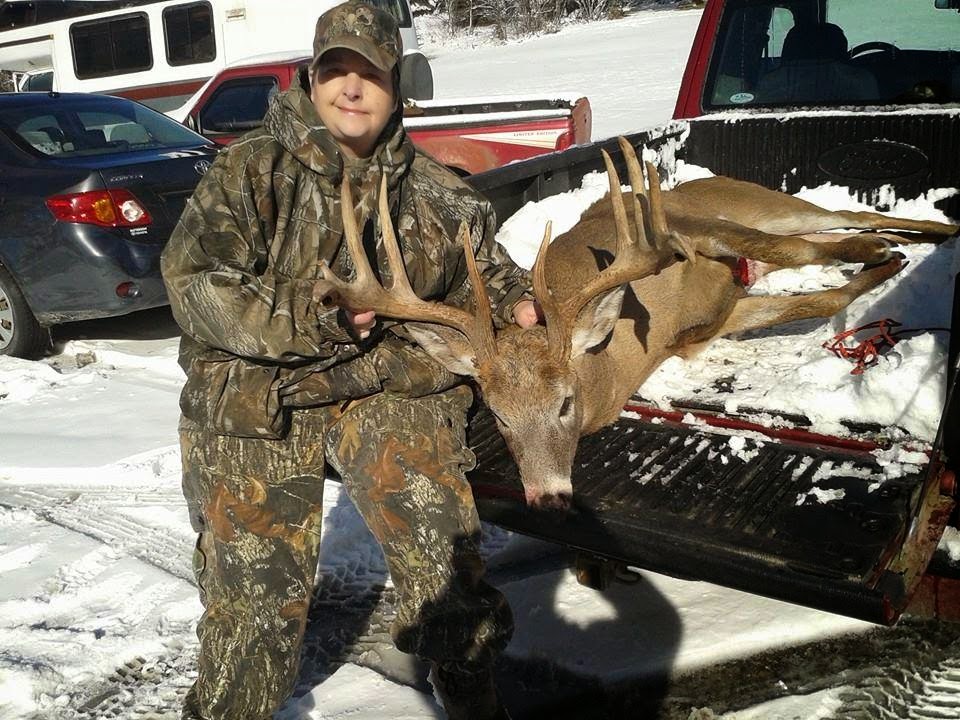 This beautiful buck was taken by a female resident hunter. This ten point buck had a 23.5 inch spread and dressed out at 227 lbs.
The next photo shows another female hunter with a nice 12 point buck taken in the snow. these are trophy deer in anyone's The following photo shows a nice eight point buck taken by well respected New Brunswick hunter Kevin B. of the Fredericton area. Kevin got out on a fresh snow and tracked his buck to it's bed and that buck stayed right there. That's a great way to take a buck Kevin! 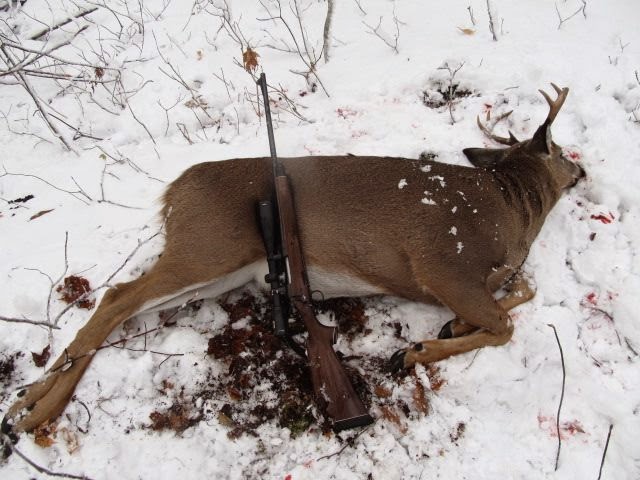 Finally, this next photo shows a doe deer that was harvested and has long spikes still in velvet. This isn't too uncommon and almost each year a doe with horns is harvested. A very unusual trophy indeed! 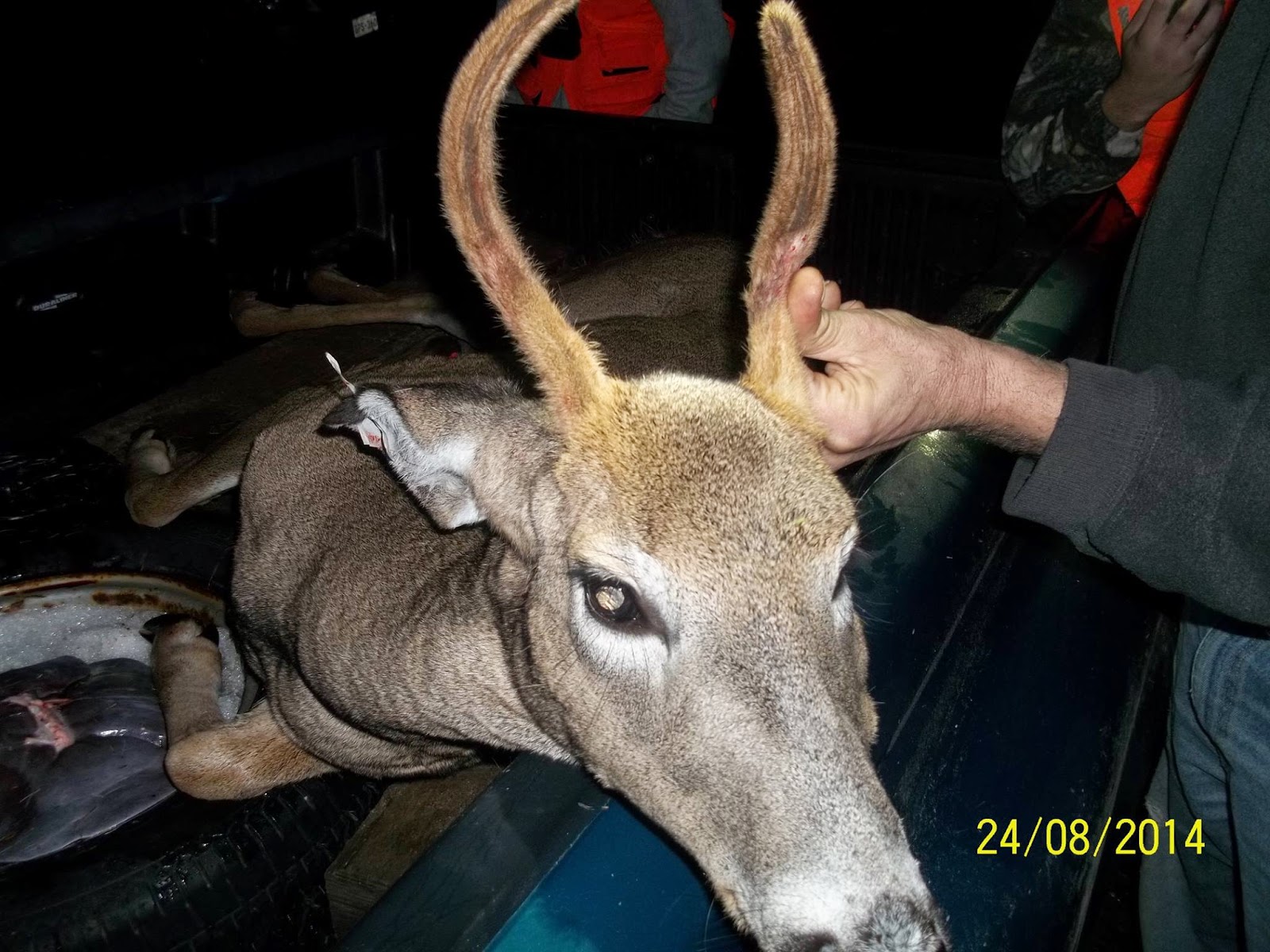 Due to the large amount of material I have on hand from this years deer hunt, I am splitting my posts and I will be posting part two of the 2014 deer hunt before Christmas next month. Look for photos of some monster bucks taken in New Brunswick last season.
Until then, this is Dale Bauer saying '' Happy Trails to You....Until we Meet Again! ''