SPIRIT OF THE HUNT AND WILD TURKEYS

Winter has come early to the Grand Lake area and it looks like it's going to leave a heavy snow pack in our area. The weather has been changing quickly this winter and this photo from late December shows how much snow we received last month. It was at the four foot mark by the end of the month. 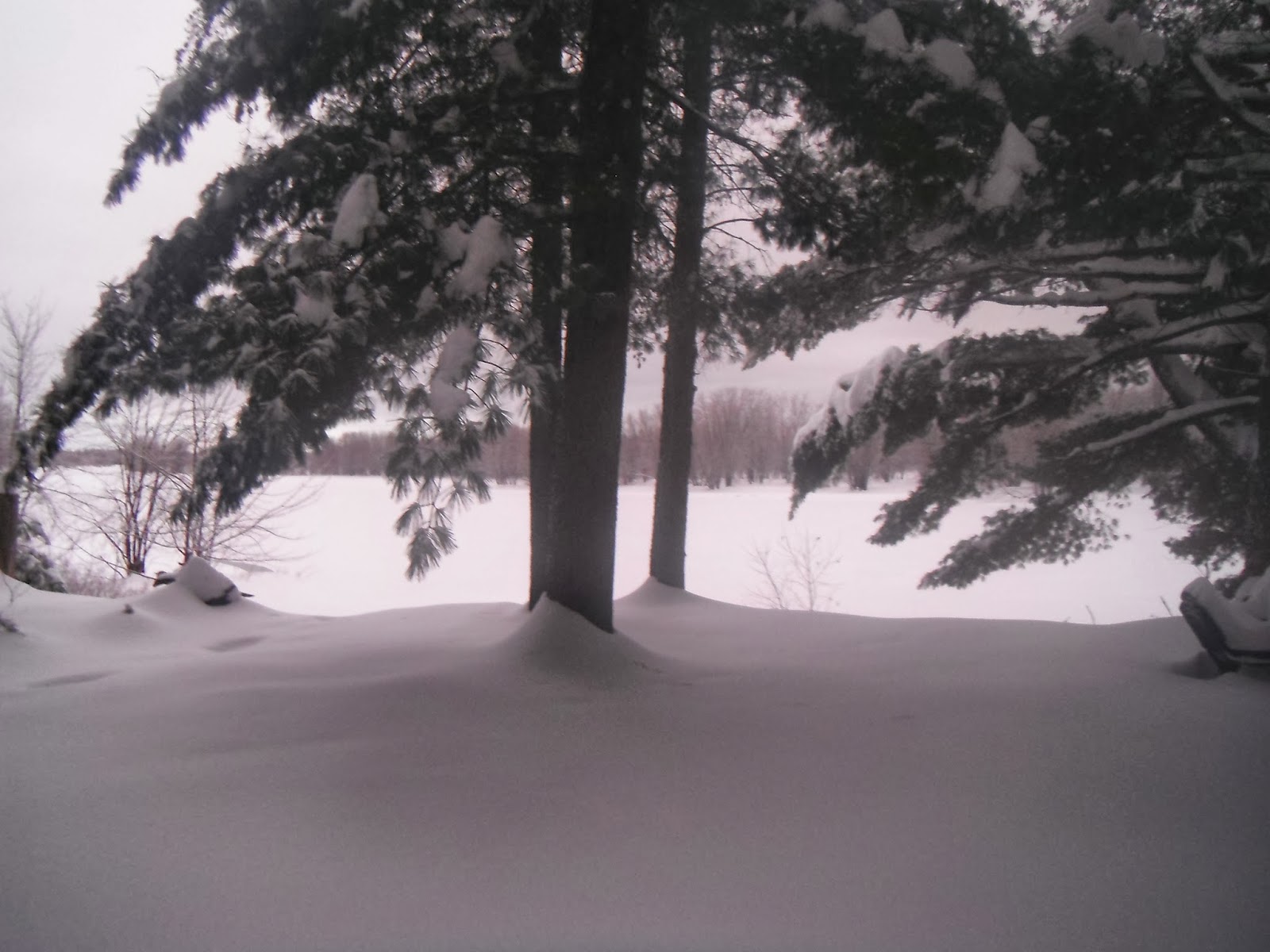 Just a short time after I took this photo we rolled into the New Year with a prolonged thaw that took that snow away right to the bare ground. The temperature stayed above freezing for ten days or so and what a difference in the landscape! This is a photo I took after the thaw from the same spot in front of my place on Salmon River. 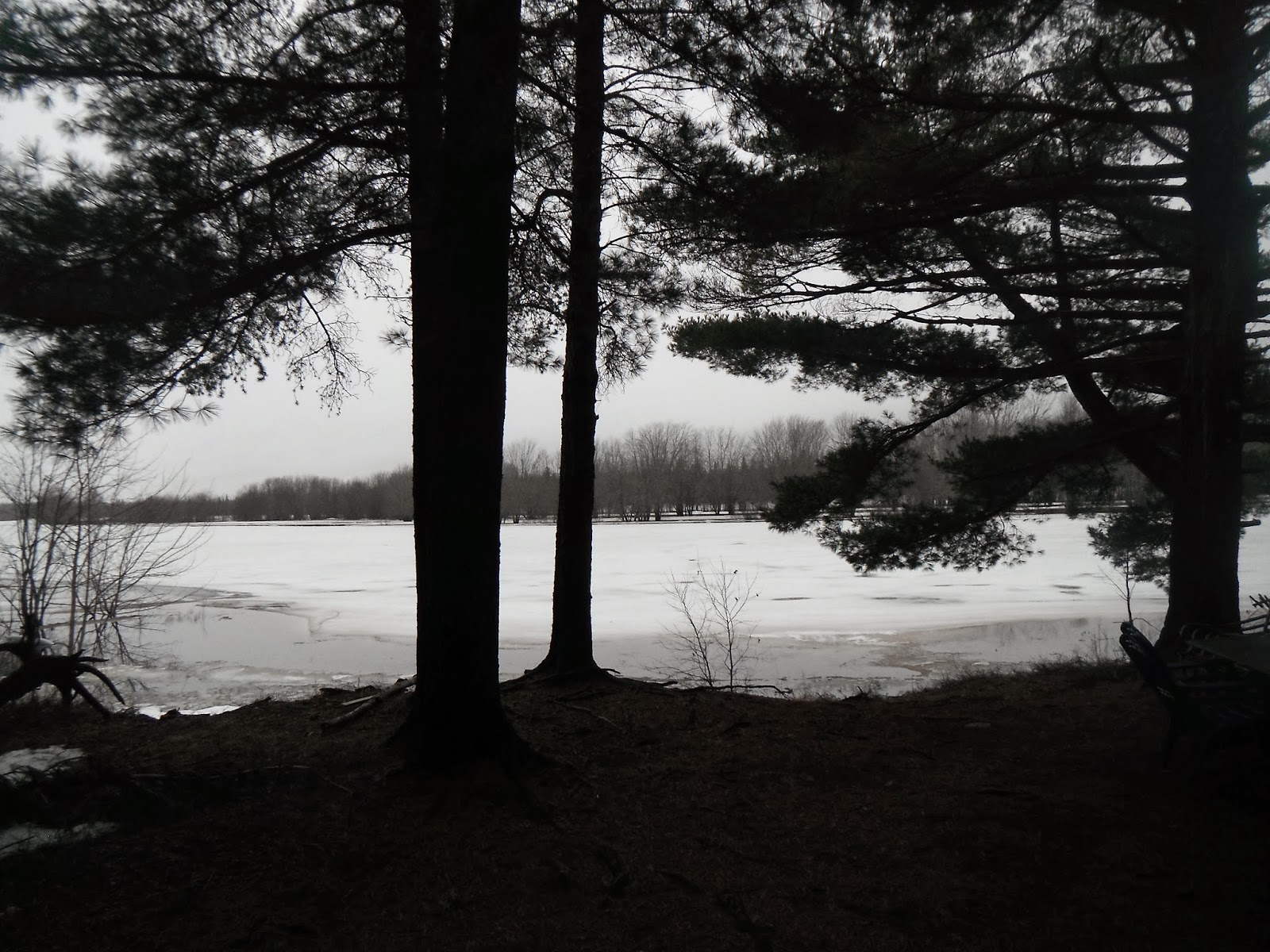 This was a welcome break from a very rough start to our winter season. A little snow helps to get everyone in the mood but when you get that much snow at the very start of our long winter season here in New Brunswick it really depresses outdoor activities because of the difficulty in getting around. Other than snowmobiling, most activities were put on hold until better conditions prevailed. Even the big thaw created problems for the ice fishermen. First it was too much snow to reach the fishing spots and then it was too much water on the ice and dangerous conditions around the shore and in areas with a current. At least the deer and other critters got a break from the brutal cold and heavy snow pac and the last week or so has brought moderating temperatures and flurries. All in all, a welcome break from the monotony of our long winter.

Our deer herd in New Brunswick has been growing during the last two years and if the weather holds we should see another good season during the fall of 2014. Our herd is struggling on Crown land and there are very evident reasons why this is happening. I cannot understand what the big forestry companies are thinking. They have a mandate to manage our Crown forests for the good of all New Brunswickers and they are missing the mark by a wide margin. Their focus is entirely on the production of wood fibre and this has left many of our animal species, including deer, in a position where they are struggling to survive. Buffer strips that are too small, monoculture softwood plantations and spraying of herbicide are all contributing to this hardship in our forests. These forestry companies had better get pro-active in their management practices because there is a movement afoot to correct the imbalance that exists in the our Crown forests. Citizens are sick of the greed and callous actions displayed by these corporations in their never ending quest for more fibre from our forests. What really bothers me is the fact that our tax dollars pay these big companies for their management practices on our Crown lands and what do we get in return? Not much. Fewer and fewer jobs and falling species numbers. Is that what New Brunswickers want? Not on your life! All these greedy buggers have to do is make a few adjustments in the way they do business and we would see some big changes in our forests.
If the big forestry companies want to stay ahead of the curve they should stop the spraying of hardwood saplings that deer and other species need for food. They should also be planting cedar along the buffers to provide both food and shelter during our long winter.  Another suggestion being bantered around is to plant clover along unused logging trails. These small steps will not affect the corporations bottom line very much but would have a substantial effect on the growth of our deer herd and the growth of other species. Change is inevitable and these big corporations preach this mantra whenever it suites their business plan but if it is contrary to their vision  they will fight change tooth and claw if they think it will impact their business plan. This has been a successful tactic in the past but because of the increase of information due to the Internet,  information is dissipated to the masses much more quickly and effectively. The people will no longer be fooled and the current status quo in New Brunswick's forest is no longer acceptable. There is even a movement afoot to revamp the forestry act to correct the imbalance that exists in this sector of our economy. That is why these companies should take the initiative and make changes to the way they do business in our forests. At least then they could try to put their own spin on it and get credit for being a forward thinking corporation. The other alternative is to be forced into change through the political system. Only time will tell what approach these big companies will take as we move forward into the future. If readers would like to hear what our deer biologist has to say about the deer population in this province, just click on the following link to view a short video he made recently.
http://isourforestreallyours.com/Isourforestreallyours/Ep_17.html

Wild turkeys have been at the forefront in wildlife circles here in New Brunswick lately and for good reason. We have had a growing population of turkeys in the Grand Lake area for a decade or so due mainly to the efforts of one far sighted individual. The turkeys we have in our area are from wild Pennsylvania stock and have been raised in a free range environment. Although many sportsmen do not agree with this situation, the results cannot be denied. From these original birds there has been a steady growth and expansion of birds to the point that most areas around lower Salmon River and Grand Lake have flocks. New Brunswick has turkeys. That is a fact. Why doesn't the government sanction a trap and release program to speed up the growth of these great game birds? The NAWTF has several chapters now in New Brunswick so the infrastructure is already in place to facilitate a trap and release program. Again, change is coming and inevitable so why not speed up and assist the spread of this game bird so that we can have a hunting season sooner. This game bird is a proven money maker for governments in other jurisdictions and Lord knows our government needs more revenue! Here is a recent photo of a flock of twenty or so in a field near Coal Creek.

There are many flocks of this size and larger in our area and they seem to be doing very well. Winter weather is a big factor in these birds survival and there is no doubt that a harsh winter affects their numbers. Having good habitat is crucial for these birds survival and the best ground is on private land in the southern half of the province. Ultimately, this is where the greatest numbers will be found. This is another reason forestry companies must make changes in their practices because if turkeys are to expand their range in New Brunswick suitable habitat must be found in our Crown forests.
I have noticed a subtle change in my perspective of the hunt in the last couple of years and I have found it a bit disturbing. I first noticed this phenomenon occurring in my good friend Allen Davidson a couple of years ago. Now,  Allen has been a life long hunter and has taken several trophy deer with his best buck dressing out at three hundred and two lbs. His second best buck dressed out at two hundred and seventy-five lbs. These deer are his biggest but he has taken a truck load of animals over the years. Allen is now retirement age and has, like most of us older folks, slowed down a bit. I found I had a hard time getting Allen to accompany me on my frequent trips. He would make up excuses and I just chalked it up to indifference or maybe he was too busy. Then, low and behold, I started to experience some of the feelings Allen was having. It seems that as we age we lose that aggressive drive that motivates hunters to pursue game. I chalk this up to less testosterone flowing though our bodies. When a hunter is young he has an almost insatiable desire to take game and he rarely focuses on the journey that takes him on the pursuit of the game he is after. As a hunter matures he has usually experienced the thrill of taking game many times over his lifetime and that thrill seems to diminish somewhat. It doesn't disappear, it just subsides. The difference between young and old hunters was driven home to me during the last couple of years because many times I hunt with younger men. The younger guys get really hot to take their game or fill a bag limit on their hunts. I felt myself experiencing the hunt in a different way and sometimes this can even lead to conflicts in the field. That is the last place you want to have issues. As I reflected on this I realized that this was a natural occurrence just because any group of hunters are usually at different places in their outdoor experience. The drive to succeed is less for older hunters. It's kind of like "been there, done that". That doesn't mean the older hunter doesn't still get a thrill when he succeeds in taking game, it just means that many times he enjoys the journey as much as the actual killing or taking of game. This seems to be where Allen and I are at this juncture. I see signs of this happening with Kenny too but to a lesser extent because he is younger than us. We all seem to enjoy scouting for game and finding big bucks and trophy bears but personally I am just as happy to see a sport connect on a trophy. I think that's a good thing and it seems to be working well for us as we go about our business in the big woods in our little slice of paradise.
Ken and I are offering some super deals for spring bear and summer fishing trips this year. If you are planning a trip to New Brunswick this year please contact me because if you can help us expand our customer base a bit we can offer you some good deals. We are NOT trying to be a large outfit. Just trying to get a few more customers in certain areas. One area that is currently an under exploited  fishery is the great pan fishing and pickerel fishing we have in our backyard. The first of June is a good time for a bear hunt and this is the peak of the white perch run. This time frame is perfect for visiting hunters and fishermen to experience the bounty the Grand Lake area has to offer.
Until next time, this is Dale Bauer saying "Happy Trails to You.....Until we Meet Again".
at January 29, 2014 No comments: