Fall in New Brunswick is a beautiful time of the year and here at home on Salmon River we are blessed with an abundance of post card quality scenes. A drive around the Grand Lake area will provide many good photo opportunities with the beautiful scenery and abundant wildlife in our area of New Brunswick. 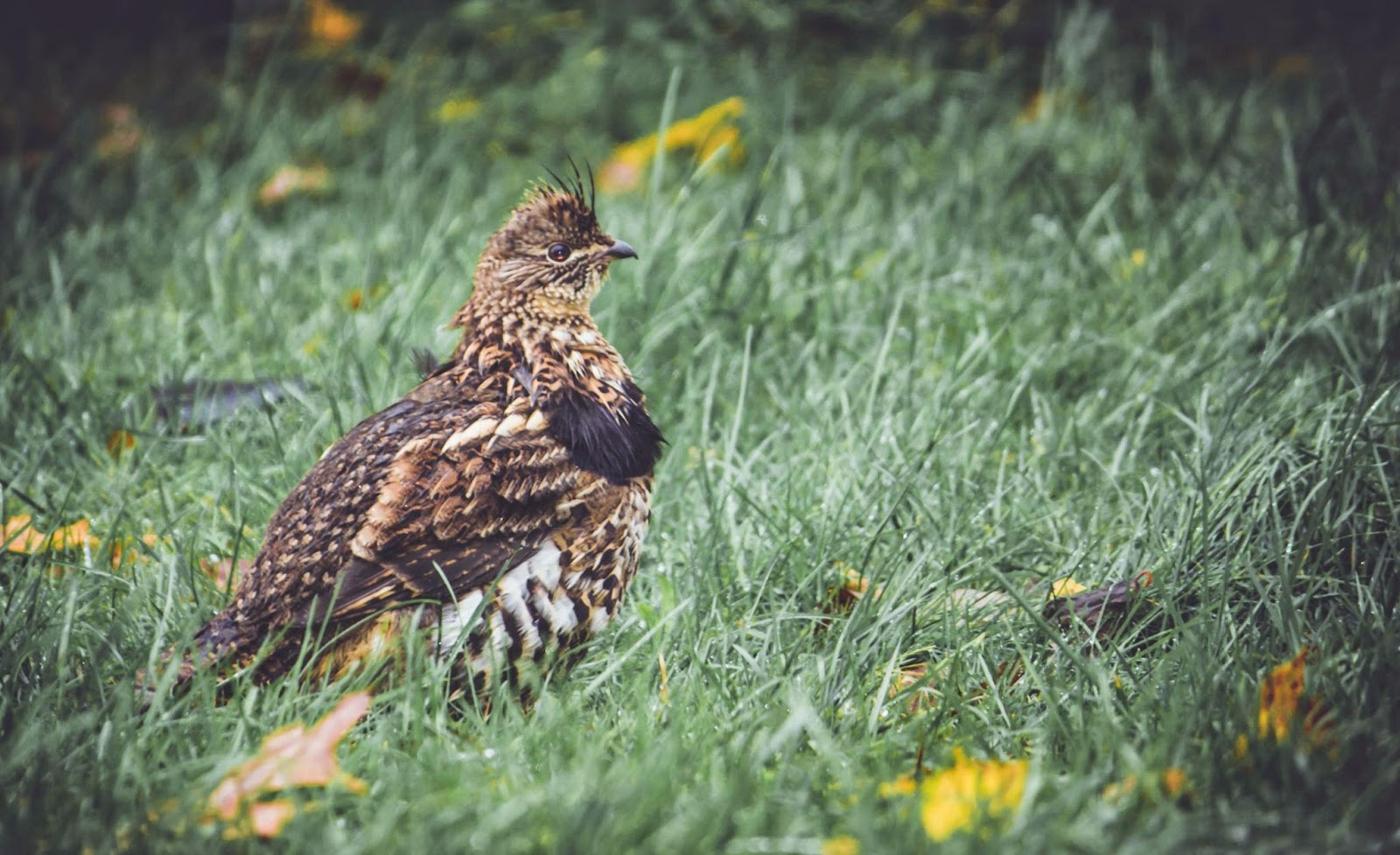 This male ruffed grouse is in a relaxed pose. If he was strutting his stuff,  the black ring around his neck would be standing up and he would be fanning his tail feathers. The next photo was taken by a resident Laker right off of highway 105 on the Grand Lake Meadows. This heron seems to be at rest with a male mallard standing in the background. 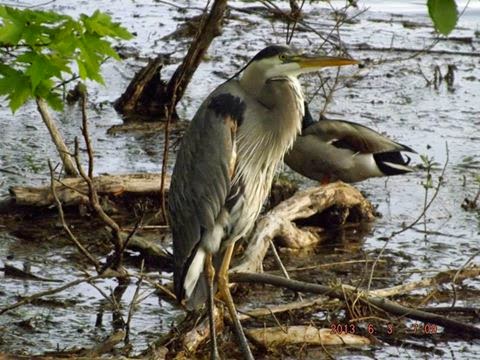 I took the next photo a few years ago and wanted to include it to show the beautiful colors of the maples on Moon Island near my home. It doesn't get much prettier than this! 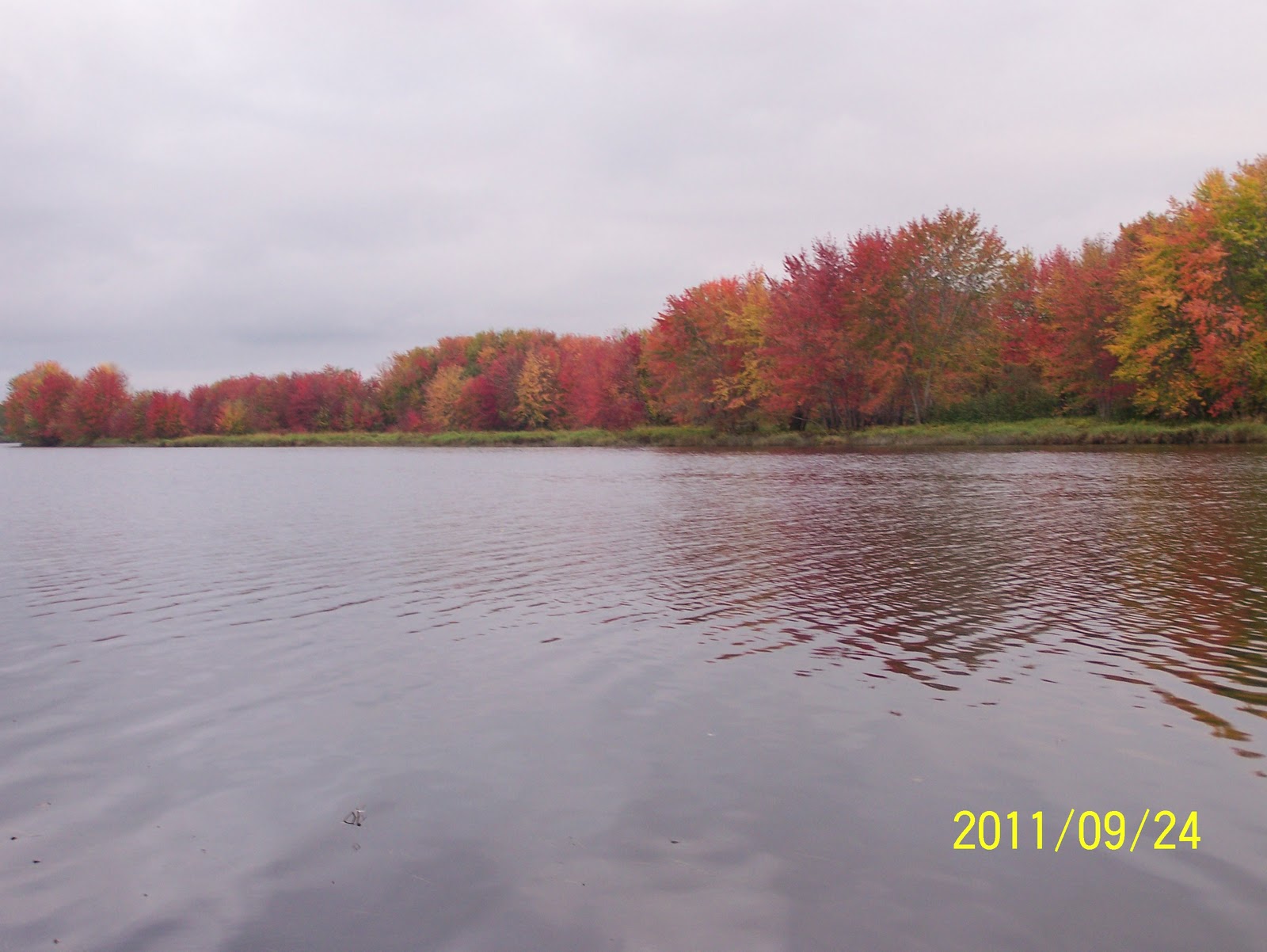 We have packed our fishing gear away for another year but I did get away to the Miramichi for one last try for salmon. This was a very disappointing year for anglers and outfitters alike and although there were a few fish around, they weren't in the taking mood. Old Mack McCormack told me he fished the Cains on the last day and the river was full of fish. I asked him how many he hooked and he said he couldn't buy a strike! He told me he tried everything in his fly box right down to No.12 hooks but still no takers. That's salmon fishing for you!
I didn't hook any salmon on my last outing but I did land a couple of nice trout. 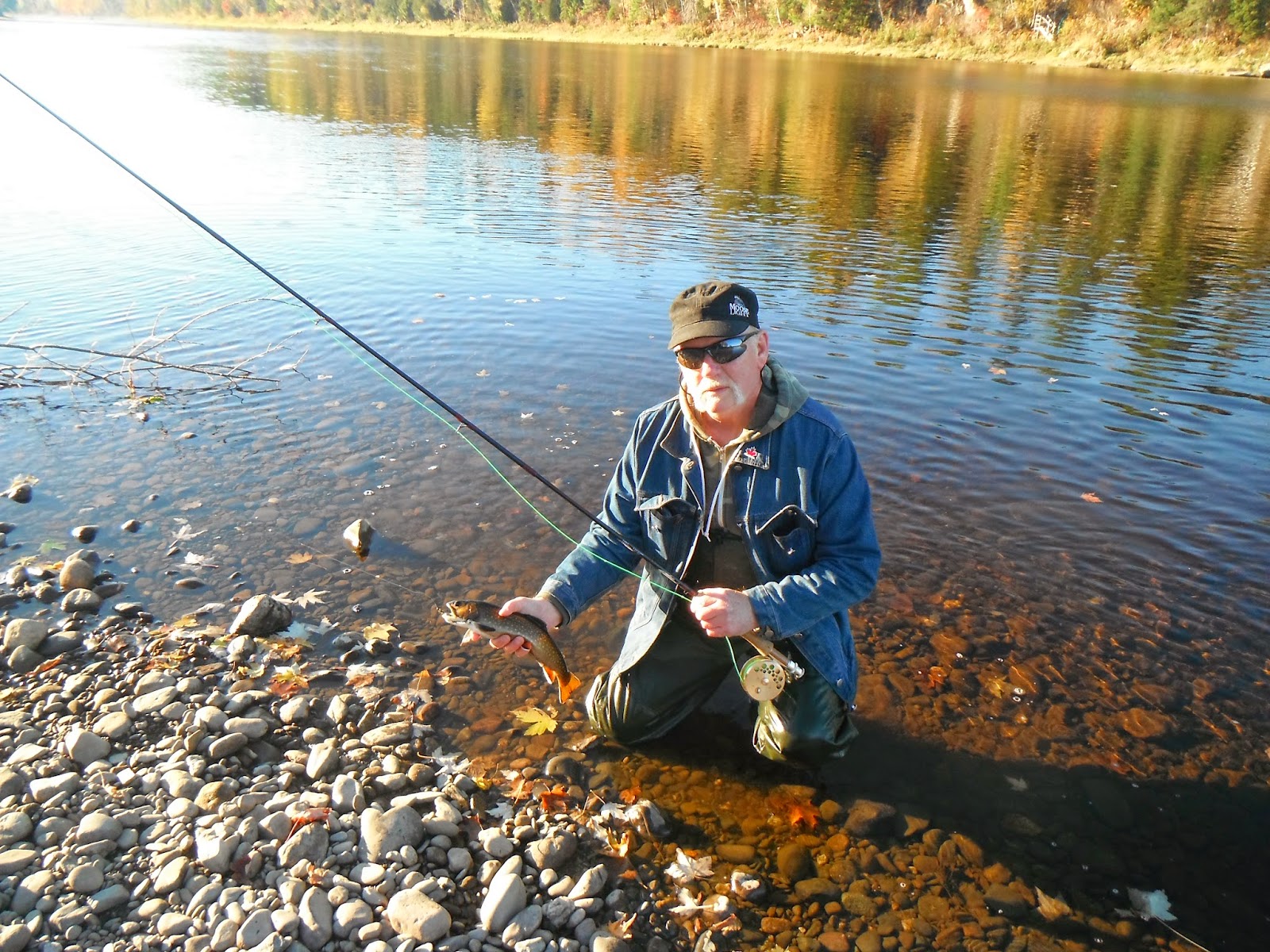 These trout put up a good fight even on the heavier salmon tackle I was using. I'll take these trout all day long if the salmon aren't co-operating. It sure livens up an otherwise dull day! The next photo shows another trout I took the same afternoon. 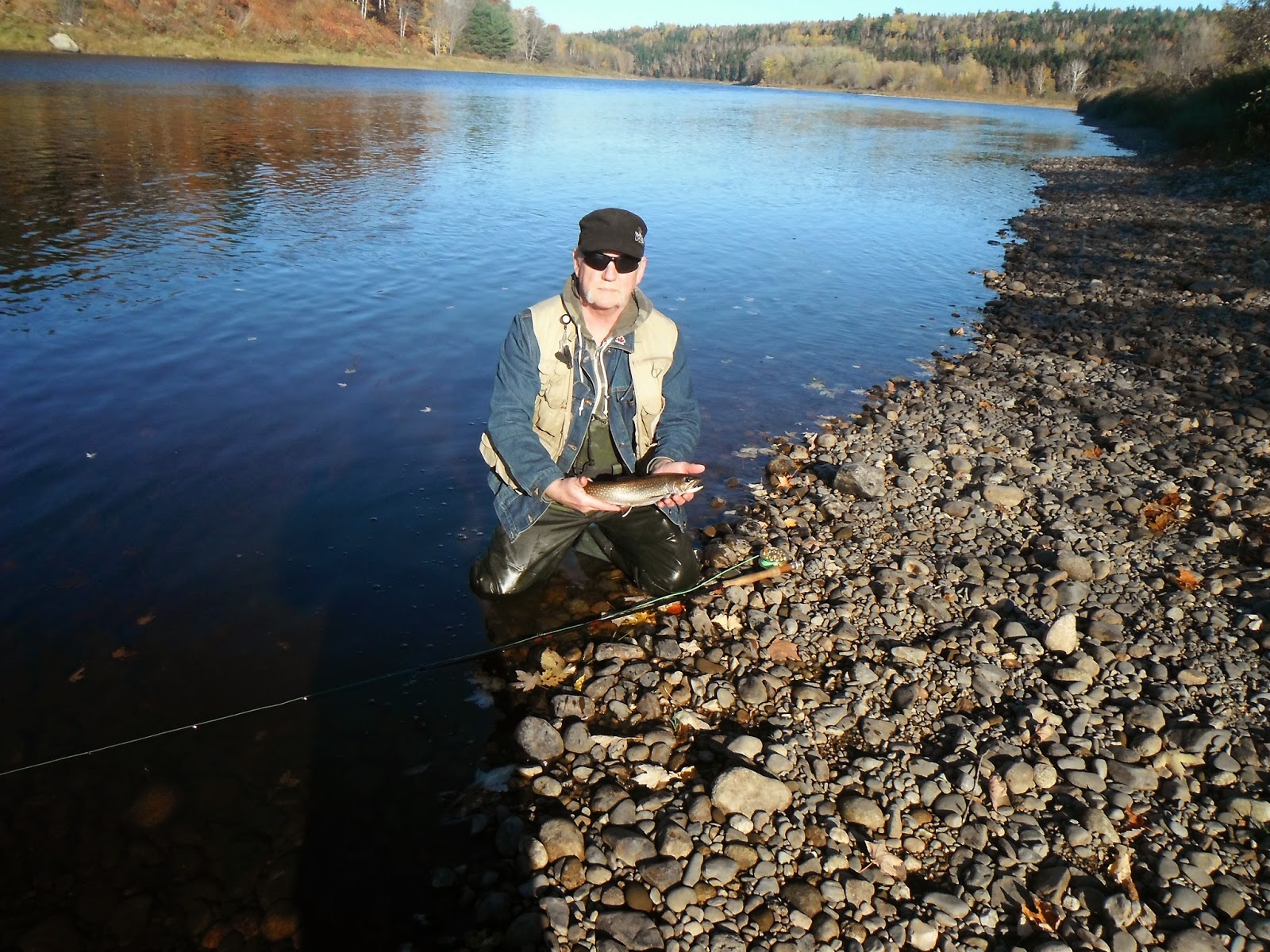 We ended our pickerel fishing for 2014 on a high note with many nice fish landed. We had multiple days of twenty plus fish hooked and released and I landed my best fish of the season on my last trip. This nice pickerel was twenty-five and a quarter on the measuring tray. That's a nice pickerel anywhere! 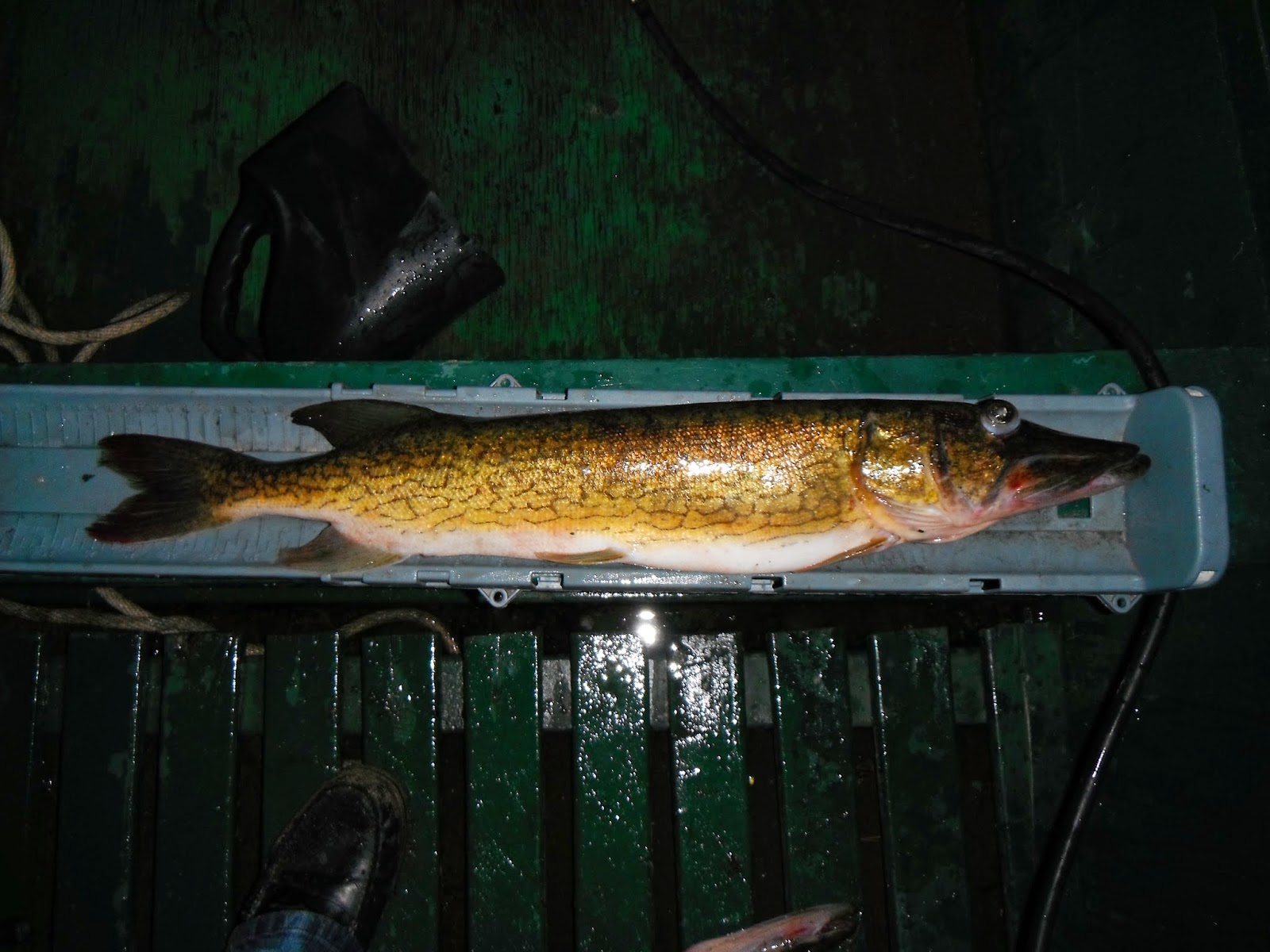 The measuring tray we use is made by Frabill and they are very useful when you want to get accurate measurements such as in a tournament. 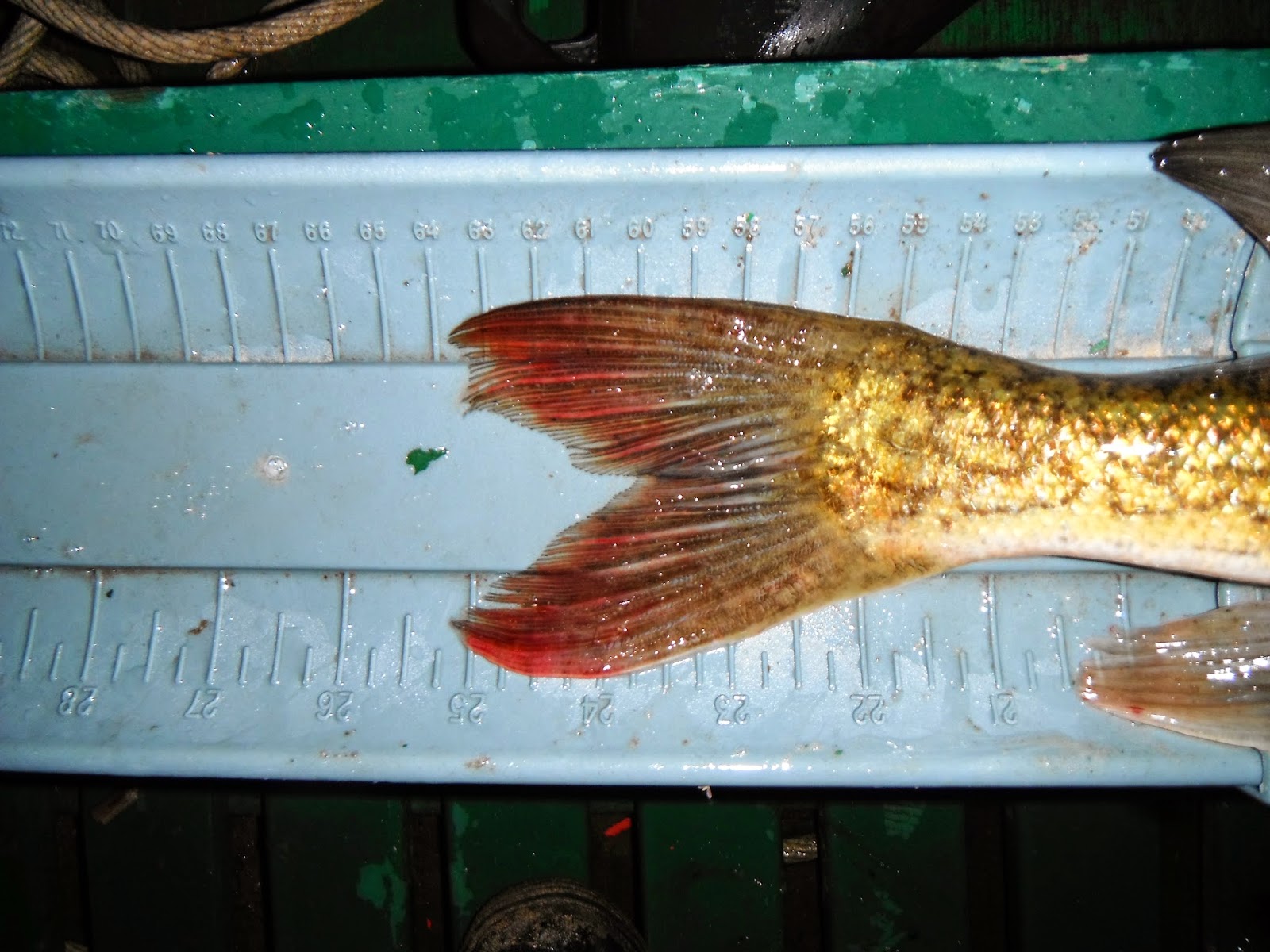 The more I fish for pickerel, the more I enjoy catching them. They very rarely disappoint and the fun factor is high. On a good day it can be non-stop action and young and old alike can appreciate that kind of fishing. We like fishing pickerel through the ice so we're not quite done with this species yet.
The duck hunt in our area was as predicted-slow! The water stayed high during the spring and summer and this hampered the growth of duck food in the bigger ponds near home. As if that weren't bad enough, the water dropped like a stone and the ponds nearly dried up during September. No food and no water means no ducks, unfortunately. The boys did manage to get a handful of birds that kept the dogs busy for awhile but there were no limits in any of our blinds this year.
My neighbour across the river had good field shooting the first couple of days for geese. Their group of four hunters took nineteen geese the first day. They continued to shoot geese all week as his fields were being harvested. He has a great set up and never fails to get a few good goose hunts in as his fields are being cut.
We are seeing good numbers of grouse, especially spruce grouse during our travels. The woodcock are down a bit in our area but that may be just a local thing in our coverts. The rabbit population is on the upswing in our area and I like to get a couple of rabbits and a couple of spruce partridge and make a stew. Real tasty on a cold fall day!
As I write this piece, the bow only season for deer has ended and the gun season is in it's first week. Our deer herd is producing some nice young bucks on the private ground in the southern part of the province. This is where the numbers are and the south is where you have your best chance of getting a nice buck. New Brunswick has the ability to produce some nice racks on three and a half year old bucks. These bucks in good habitat will weigh in at 170-180 lbs. field dressed and can have a nice 8-10 point rack. Not too shabby but we just need more of them! The next couple of photos are of nice young bucks that were taken by residents with a bow. 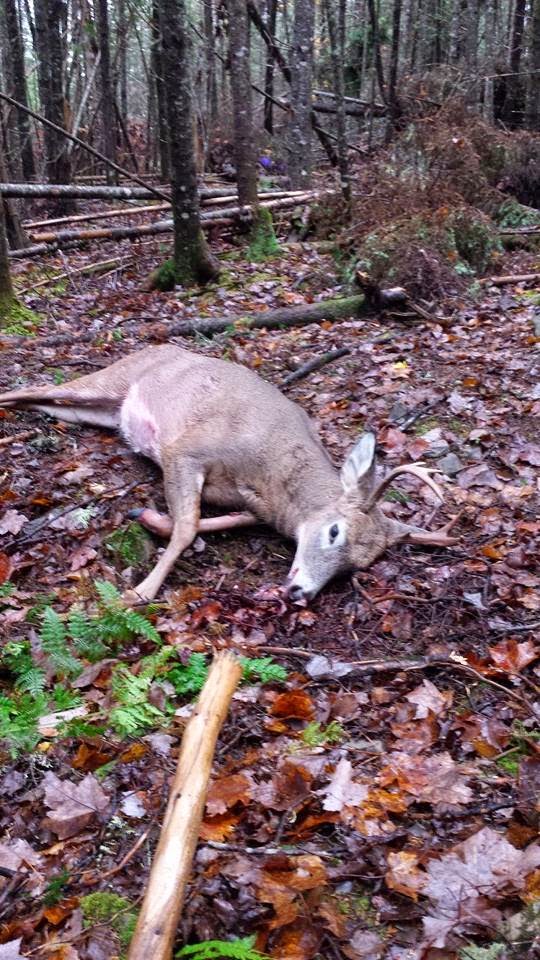 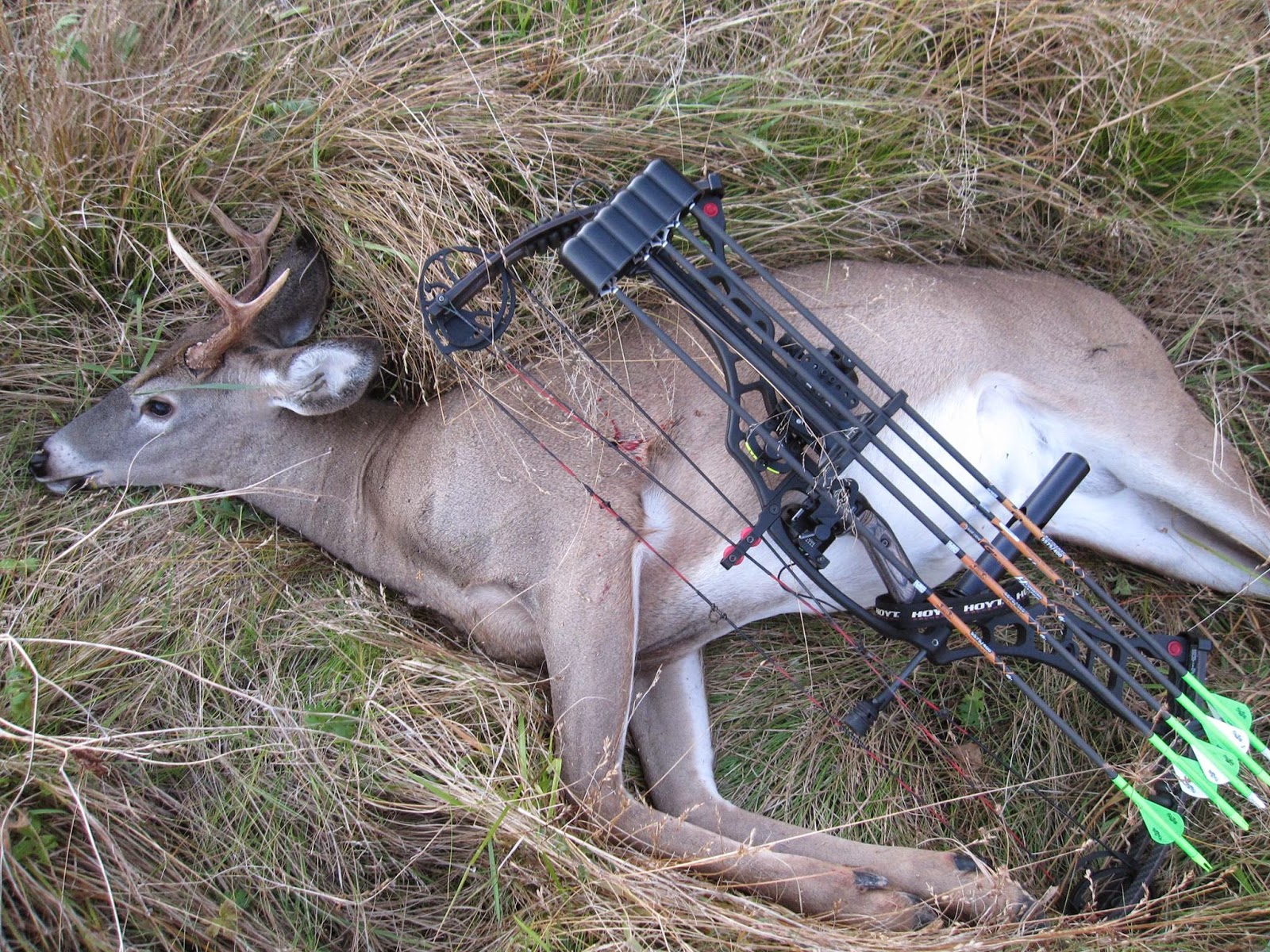 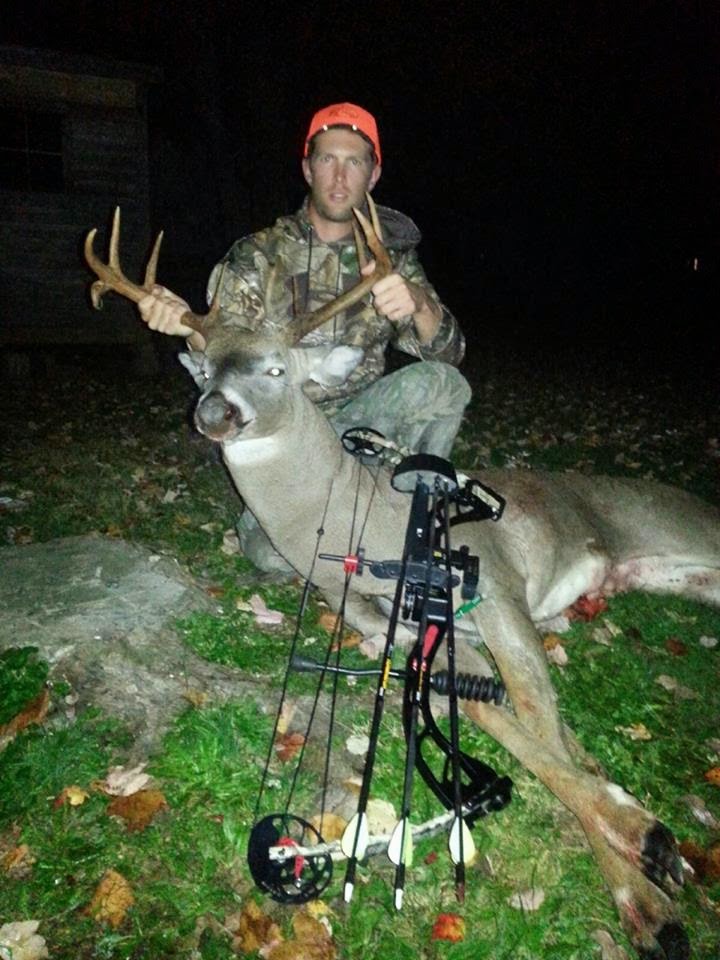 This is a mature New Brunswick whitetail that is showing some good width in his rack. There are some great opportunities for bow hunting in New Brunswick during the early season. During the three week long season, hunting over bait can really increase the odds of taking a decent buck. Every year bow hunters and rifle hunters take big bucks over bait. If done right and in a good spot, hunters can really increase their odds of taking a nice buck. Patience is key because many times a big buck will only come in during daylight hours while tending a doe in heat. Don't complain if you have does and kids eating your apples because sooner or later the big boy will show up.
Even though the gun season for whitetails is only days old, there have been some nice deer taken already. The next photo shows a nice ten point buck taken by a resident hunter earlier this week. 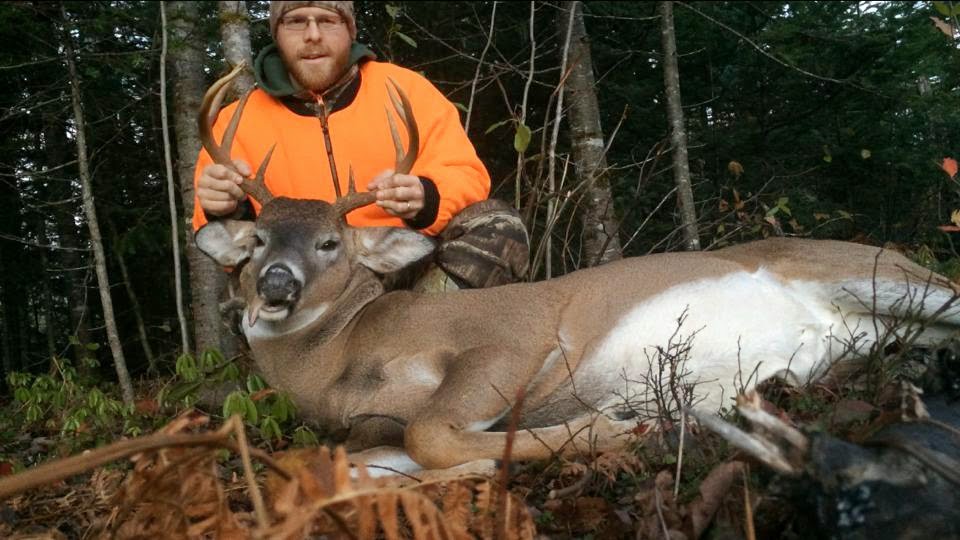 This buck dressed out at 190 lbs. I would guess this deer to be one of those nice 3.5-4.5 year old bucks I was talking about earlier. New Brunswick can produce big bucks if the weather would co-operate for a few years by keeping the snow pac to a manageable level. The next photo shows an old warrior that survived a few seasons before being harvested by another resident hunter in the Woodstock area. 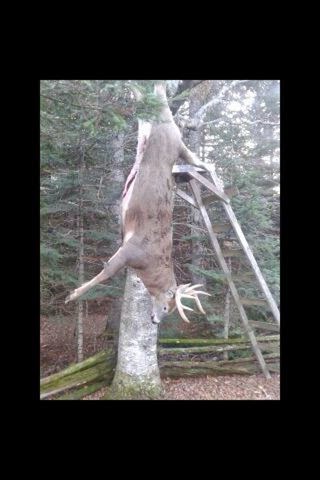 This bruiser of a buck was taken on the first day of gun season this year and dressed out at 260 lbs. That's a huge buck by any standard and it's probably no coincidence it came from farm country.
Kenny's nephew, Jamie was driving home from an area north of Chipman when he noticed a white patch on the side of the road. It piqued his interest so he turned around and when he got back to where he had seen the white spot, out of the ditch stepped a nice albino 8 pt. buck. Jamie got a quick photo of it as it took off. You don't see these animals very often! Jamie got a nice high tined buck last year that was in the 2.5-3.5 year old bracket. If this buck had lived another couple of years it would have been carrying a super rack around. I think Jamie was still quite happy to take this buck. The next photo is his 2013 buck. 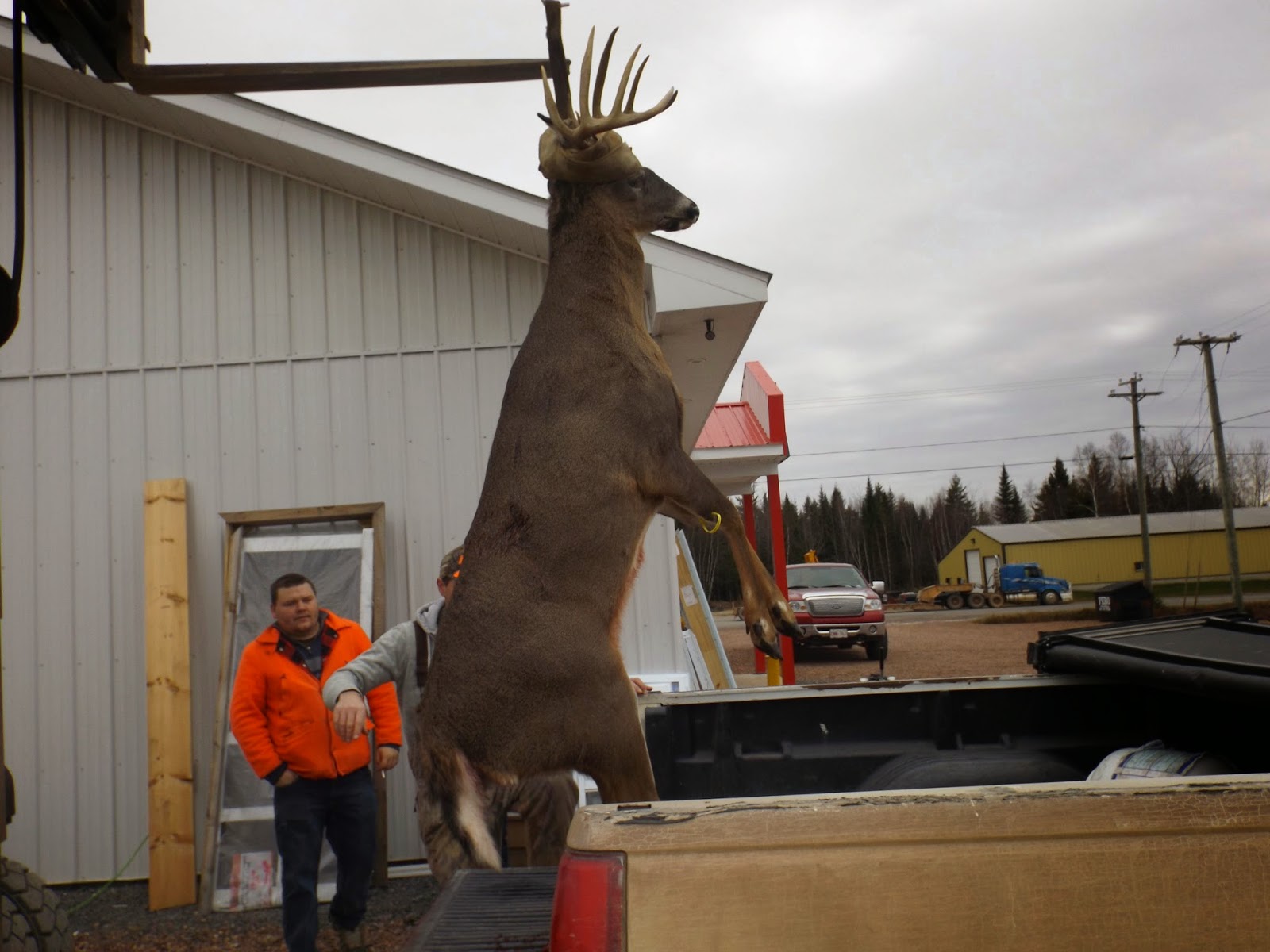 We are getting lots of does and kids on our cameras but the bucks still aren't around yet. The next two photos show two young bucks that we will be looking for this year. 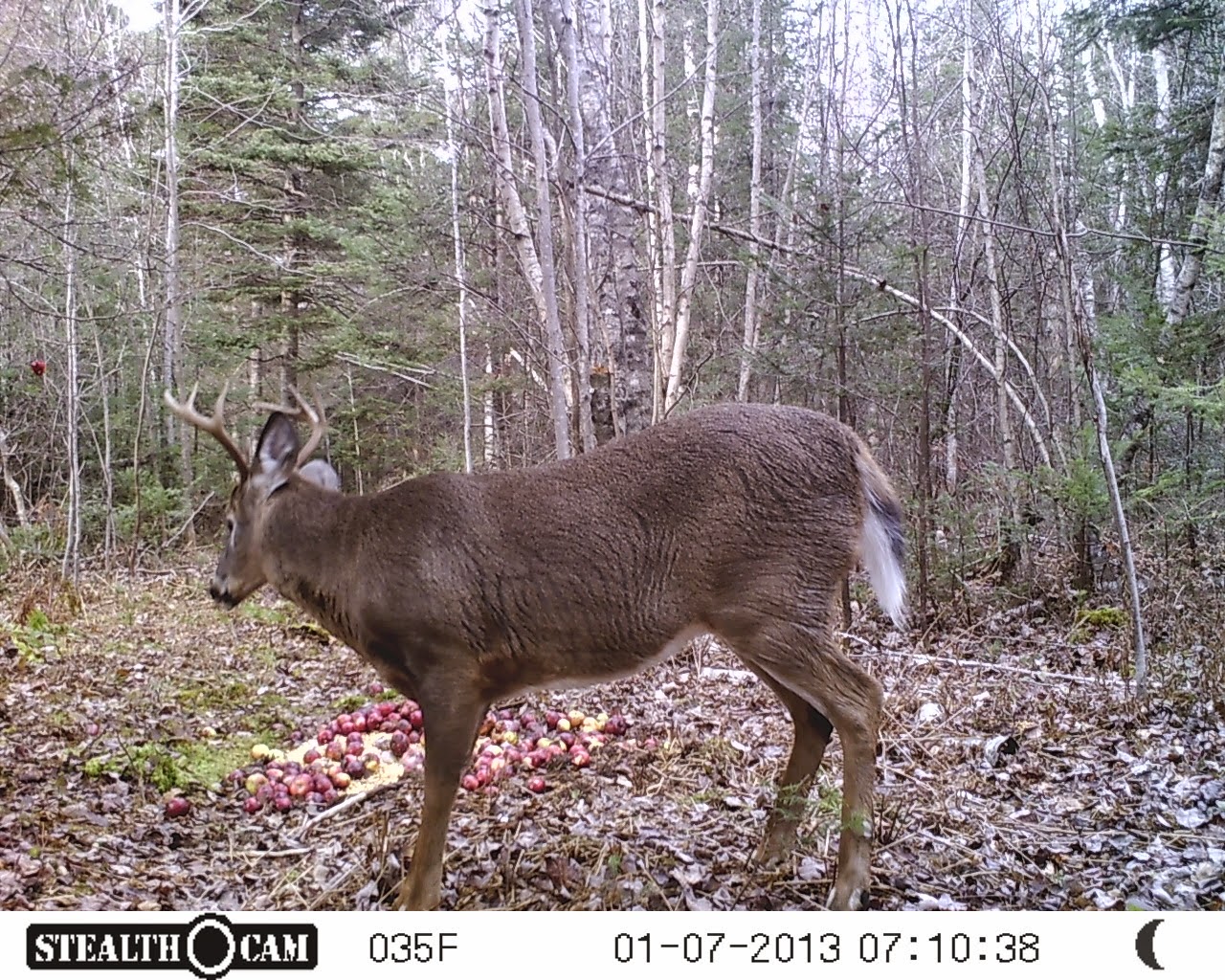 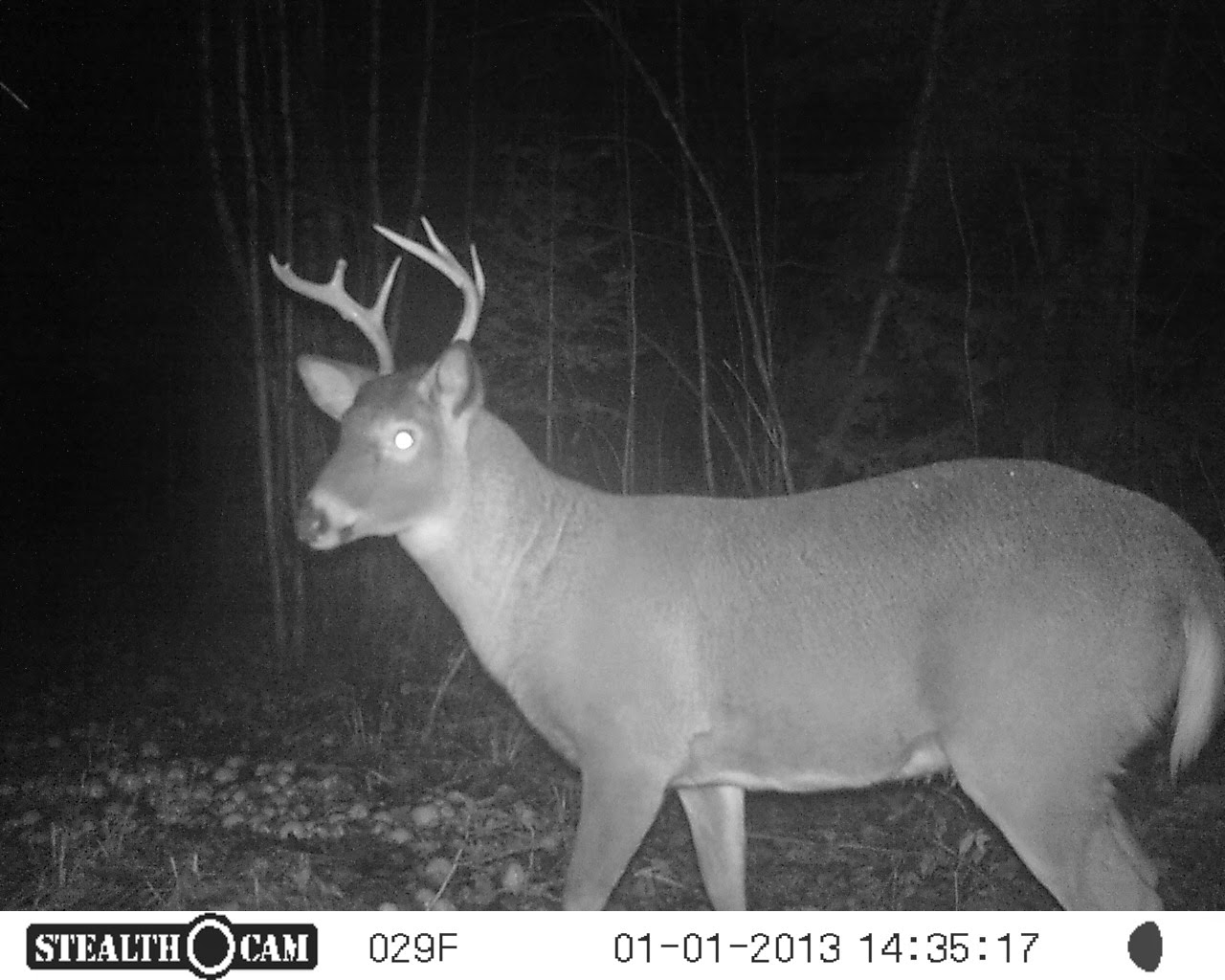 Both of these bucks will be on our hit list this year if they show up. With all the does and kids we have at our bait sites, we're pretty confident one of these bucks or perhaps one of the real trophies that frequent our hunting area will show up eventually.
Again this month,  I regretfully have to report the passing of a well known gentleman in Chipman, forest ranger Wayne Burpee.  All I can say about Wayne was that he was a very nice guy and always gave a helping hand whenever called upon. Besides being a ranger, Wayne was also Deputy Chief of the NBSPCA.  He was very witty and loved a good laugh. Rest in peace Wayne. 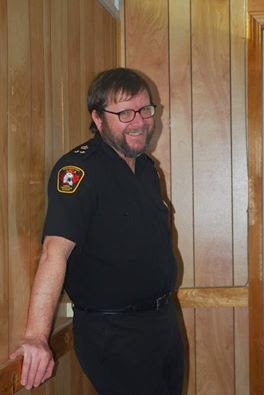 I have been finding some very nice outdoor items in my travels around the province. The following photo is a great piece of art done in relief on a sheet of copper. The scene depicts the classic hunting scene of a stag and hound. This piece is signed by the artist W. Esser and is dated 1984. It looks as if the artist also made the chip carved frame specifically for the piece. 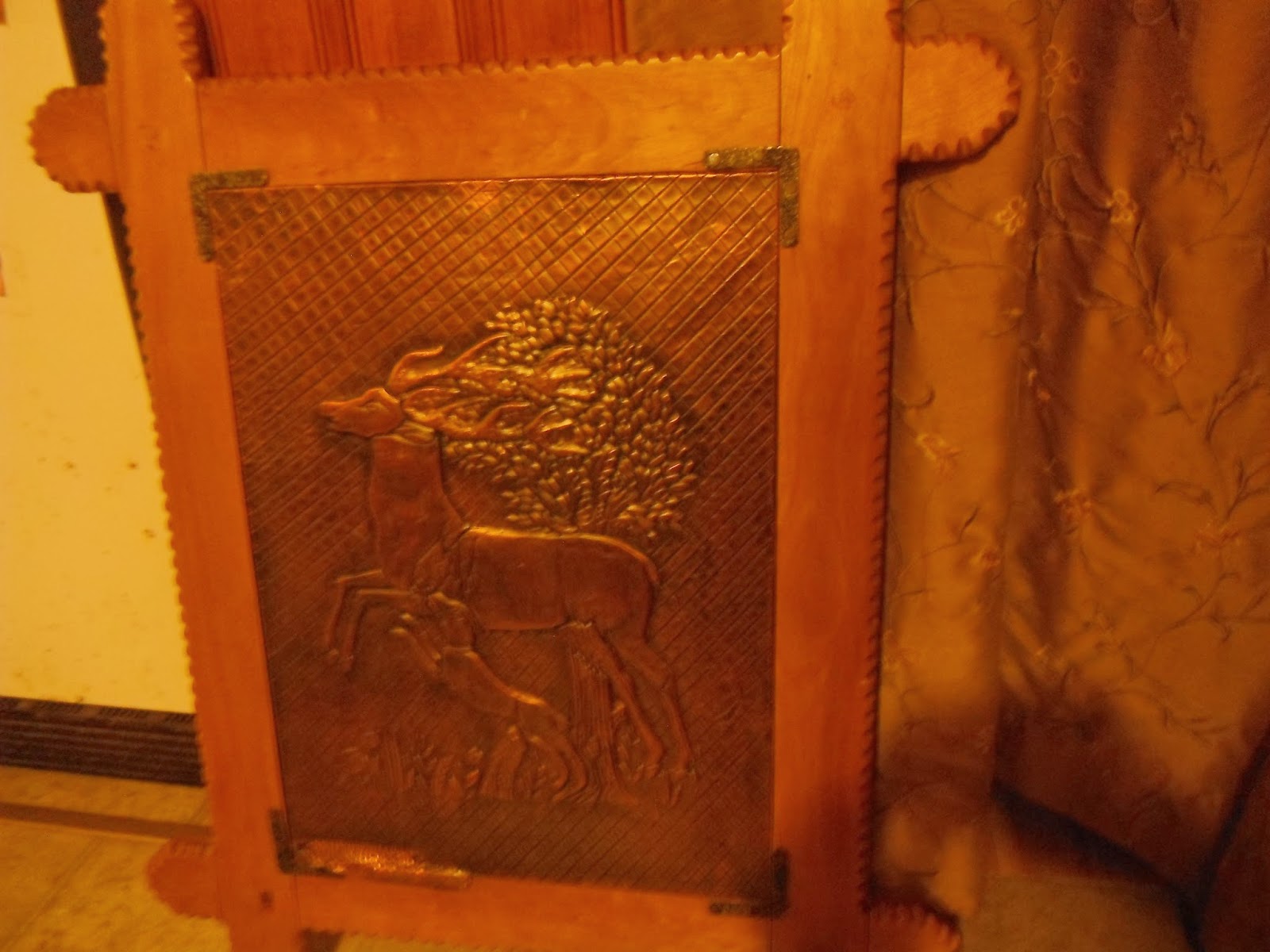 The next photo is a hand painted tray that was used as a wall hanging. The scene shows a pair of blue winged teal at rest and it is signed with the artists initials S.F. I would date this piece to the "60's" 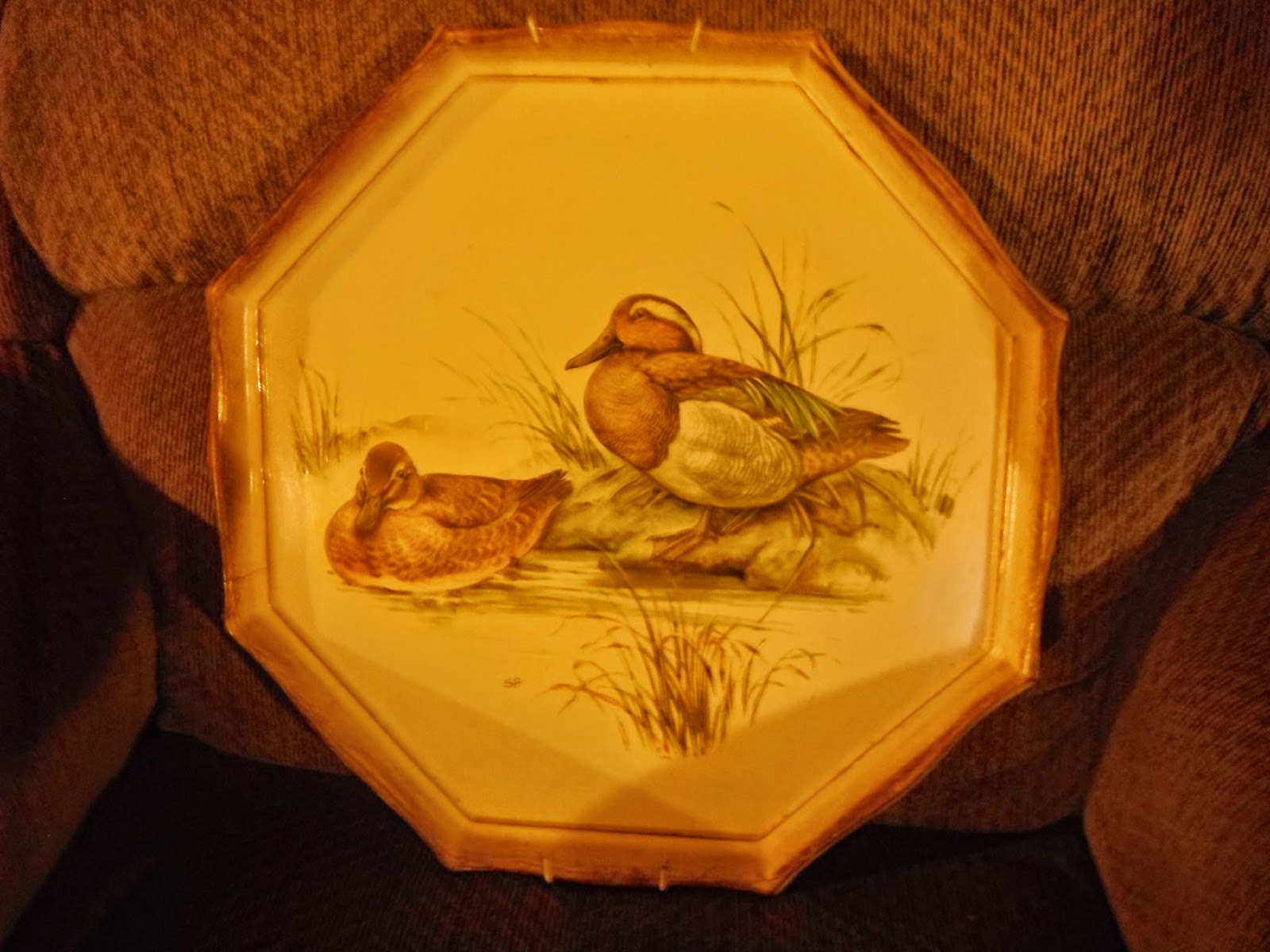 Finally, I was lucky enough to pick up a pair of coasters depicting Canada geese in flight. These coasters are made of copper with porcelain inserts and fit a drink glass perfectly. I know because I tried them out last week-end with great success. I would say these two items are from the "50's" and I really like them! 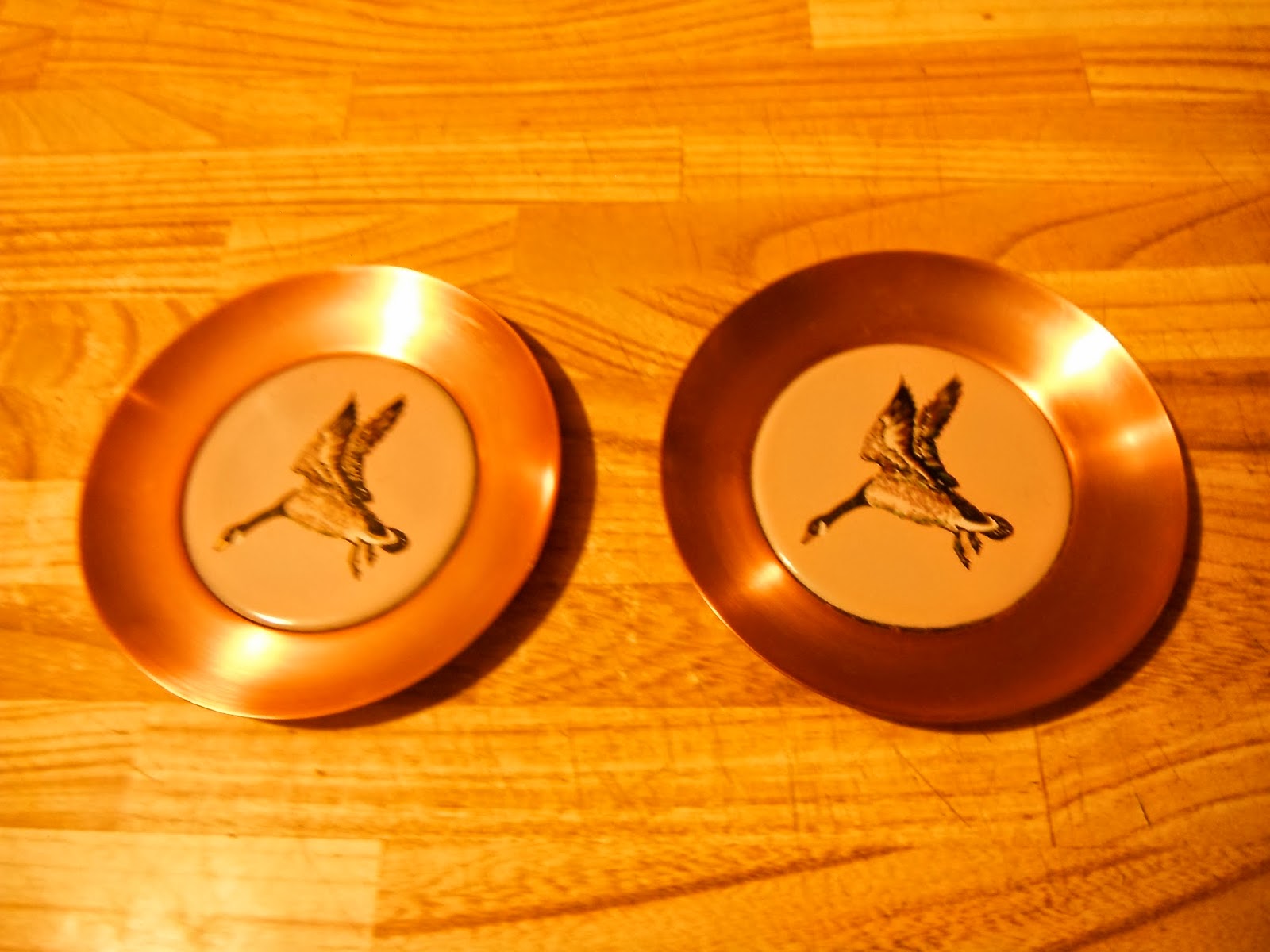 In the coming months I'll be offering the readers of my blog links to other pages about outdoor antique and collectible related items that I am familiar with. What started as a hobby over twenty-five years ago has evolved into a way of life and lately I've been getting an urge to write and share my experiences about this fun pastime. New Brunswick has a wonderful outdoor heritage that should be celebrated!
If anyone has any questions about spending some time with us in the Grand Lake area, please contact me through the channels provided. We can arrange a trip to fit any budget but we will always provide sports the best service we can.
Until next time, this is Dale Bauer saying "Happy Trails to You.....Until we Meet Again!"
at October 30, 2014 No comments: