THE COUNTDOWN TO SPRING

Spring is just around the corner and most folks around here are looking forward to it. Not because it was such a terrible winter but this has been a strange winter, to say the least. Temperatures were above normal, especially after Christmas and our mid winter thaw caused localized flooding and damaged roads. Wild temperature swings became the norm but the positive part was the low snow pac this situation created. It gave many game animals and birds a welcome break from predators and allowed them to feed more freely. Here is a photo of a deer taken in Jemseg. 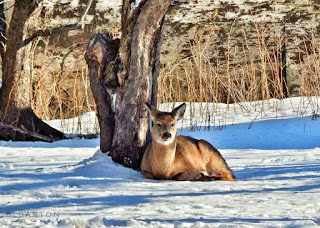 March is coming in like a lion and hopefully this month will go out like a lamb. If this old saying holds true, we could see some excellent spring salmon fishing this year. Last year was one of the worst in memory for poor conditions and numbers of fish caught. Mother Nature calls the shots and some years she can be downright cruel! Unfortunately, a large winter storm is making its way into the Maritimes and the forecast is for a foot of snow or more. We really didn't need this dump of the white stuff but we have to take what is served up. Hopefully, it won't last too long. The long range forecast is looking much better after the series of Nor'easters hit us around the middle of the month. The latest word from our chief meteorologist is a slow, steady melt during our 2018 spring and I like that forecast.. This photo shows a nice healthy group of deer near Grand Lake. 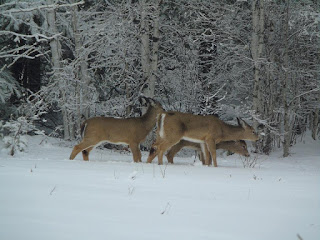 This winter was also a good one for ice fishing due to the low snow pac and the local ice fishing tournaments were well attended. As usual, we took part in the kids tournament put on by the village of Minto. This is a great tournament and is always well attended. This year my grandson Jack wasn't feeling well so it was just my son Curt, a friend of his from Calgary and myself. We fished in the over 15 category and did quite well. Curt took second place with a 23.75 inch pickerel and we caught a total of 18 pickerel and one catfish during the three hour tournament. That's a good day on the ice. Here are some photos from that day. 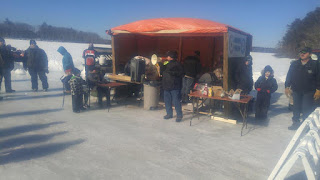 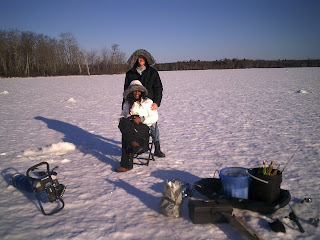 The next photo shows Fran M. from Calgary taking a break during the tournament. She caught several pickerel while fishing with us during her stay. 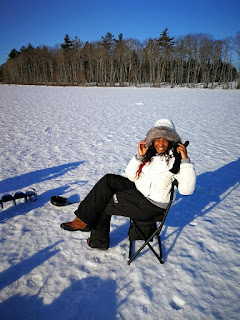 This next photo shows Curt with his 2nd place fish before putting it back down the hole. 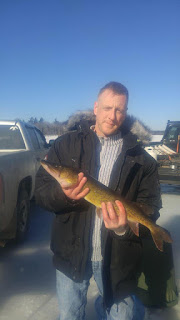 This is a shot of me with one of the pickerel we caught during the tournament. 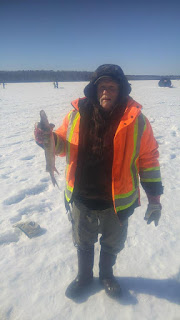 As I said earlier, this tournament was well attended with about 140 people registered and it was a lot of fun for everyone. Hot dogs and hot drinks were served and J. D. Irving donated a fantastic ice fishing package worth over $2000. Young Ethen Kassiram was the lucky winner whose ticket was drawn at the conclusion of the tournament.The village of Minto and the committee members are to be commended for putting on such a great family event. I can only see this tournament continuing to grow in popularity in the future.

The first annual Tri Lakes ice fishing tournament was held over the course of three days during the winter and concluded with the third leg of the tournament on March 10th at Maquapit Lake. This was a multi species tournament with the winner determined by whoever had the most points after fishing the three lakes. This is a great concept for a tournament and there were fishermen registered from all parts of the province. Closing ceremonies were held at the Minto Legion on March 10. Minto Councillor Reg Barton handed out prizes to the winners and after the numbers were tallied Zack Beatty took first place overall. Dustin Tower and Will Redmond tied for second. The winners received gift cards and fishing gear. JD Irving once again donated a great ice fishing package valued at over $2000. The winner was picked by draw and eleven year old Paige Clark had the right number.. Congratulations to all the winners and a special thank-you to the organizing committee whose volunteer efforts make these tournaments possible. Tournament organizers were Reg Barton, Ralph Goodwin, Sam Daigle, Jack Tremblay, George Collette, Greg Collette and Kendall Colburn.

Curt and I took Fran M. out for another day of fishing before she left for home and we had good luck once again. I think we caught about eight pickerel over the three hours we fished. Fran caught her share of the fish even though she had never ice fished before. She thanked us and said it really was a lot of fun. Here are some photos of that day. 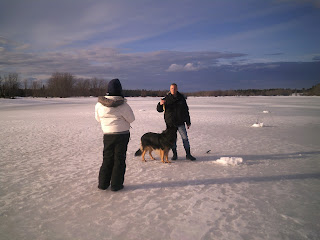 This next photo shows Fran with one of the pickerel she got that day. 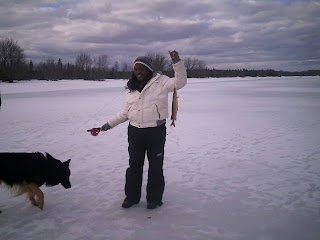 The next photo shows one of the average sized pickerel I caught during the same outing. Note the red devil in the fishes mouth. A great jigging spoon for pickerel. 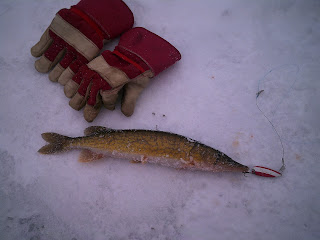 I've been out the last couple of days fishing by myself and the catching has slowed down a bit but the weather has been beautiful. I caught five small pickerel and lost one at the hole. That's good enough to keep things interesting. Here are a couple of photos from those trips. 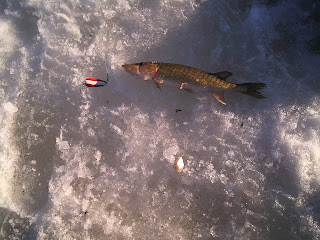 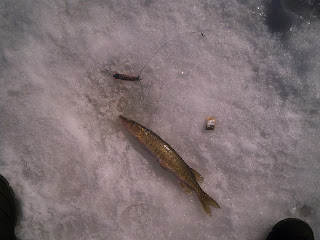 Here is a short video clip I made when I caught a small pickerel.


This has been a great year for us whenever we have been out ice fishing. I think that because we practice catch and release, our success rate stayed high. You can't catch them if they aren't there. We will keep a fish once in a while but only if it's bleeding bad. For example, out of the 50+ fish we caught over the last month, we only kept two smaller ones. One for Wes because he wanted a feed and one for us that was bleeding bad so we had a good lunch.

This last video clip was made on March 29th. I called it a monster but it really wasn't that big. I still get excited when I hook a fish with some weight.

Just wanted to wish Dallas and Wesley a big Happy Birthday! The Hargrove family had a very nice party with cake and lots of good food last week. Thanks for the invite! Here is a photo of Wes at his 87th birthday party. 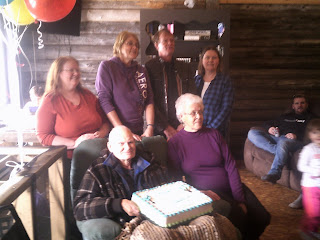 As we move into April we will be looking forward to the April 15th opener for black salmon or kelts . This is a fantastic fishery on the MSW Miramichi River and we will be fishing again this year above Doaktown and staying at the house in Carrolls Crossing. The ice could be late going out this year so I'm not going to get too excited until the water clears and the fishing gets good.

If any sport is looking for a day of salmon fishing or a spring bear hunt just reach out through the channels provided and we will make it happen.

This is Dale Bauer saying "Happy Trails to You......Until we Meet Again"