The temperatures are getting a little chilly here at home on Salmon River and we've had a bit of snow that didn't stay but you can bet more of the same is just around the corner. Every year older I get, the more I dread the coming of winter. I think I spent too many days freezing in stands and blinds over the years and it has made me more sensitive to falling temperatures. One good thing about those cold mornings is it gets the bucks running. The season just ended and from what I seen and heard it was a good one for most hunters. Cool weather during the rut is what all big buck hunters pray for and with the season running until Nov. 23 this year we did manage to get some cooler weather and a bit of snow on the higher ground. This helped deer hunters harvest some super white-tails this year from all areas of the province. Predictions were in the area of 8-8500 animals to be taken. The actual kill this year was 8,425 total. This compares to 6029 last year. The bow kill this year was the highest ever at 171 animals. This indicates an upward trend in harvest numbers and in turn, indicates a growing deer herd. Once again, the importance of mild winters comes to the forefront as the main limiting factor to an expanding deer herd.  There were more deer around this year and that was evident from just driving around and glassing the fields. Most of the hunters I spoke with told me they saw more deer this year while hunting than in the previous few seasons. That's a good news story because it takes sitings and close encounters to keep hunters in the game and sharp.
Ken and the boys did quite well this year chasing deer. Ol' Wes got a little spike horn early in the season and was very happy to get a nice piece of meat for the camp. Cory B. tagged a four point early on in the hunt while travelling with Jamie. Randy-Michael and his father both tagged out early with nice little bucks taken in the Coal Creek area. Dallas tagged a nice, basket racked six point later on in the hunt and Jamie took a very nice high tined buck after making a super shot to close the deal. I'm not going to show the photos of the smaller deer but I've got Jamie and his buck while holding his new baby daughter. Jamie's buck was 170 lbs. dressed and had great tine length for being a young deer. If this buck had another two years of growth it would have been a contender, for sure. 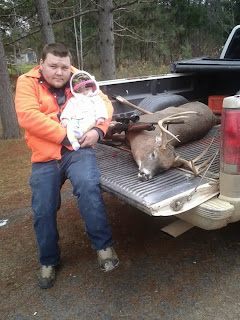 Jamie has really come into his own as a hunter the last few years. He has taken a couple of nice bucks besides this one and he has a lot of desire so he will continue to take nice bucks because he knows what it takes to get one on the ground. Luck alone won't do the trick consistently. Work and commitment are the main ingredients but a little luck helps too. Jamie killed this buck as it was standing broadside at 300 yrds. while firing off hand without a rest. He told me he had to hurry because the buck was getting antsy and he thought he could make the shot. He was right and the deer dropped in its tracks.
Several local hunters scored on nice bucks this season. Terry L. of Chipman got a nice 10 pt. buck. Terry manages his own lot and grows some nice bucks and has killed many trophy bucks over the past decade. Dale Y. of Minto killed a heavy horned 15 pt. the first day of the season. He had watched this deer all summer and had hundreds of photos of him. The photo I have doesn't do the deer justice but you can see it has a big rack. This deer was killed within a couple of miles of Grand Lake in an area known to produce nice racked bucks. 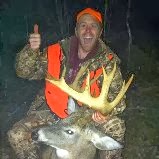 Sam W. of Coal Creek also killed a nice 11 pt. buck near the end of the season. This follows on the heels of an 18 pt. bull Sam took earlier this fall on the annual moose hunt. He told me he had a great fall and I have to agree! The next photo shows a couple of bucks taken by two hunters from the North Shore. 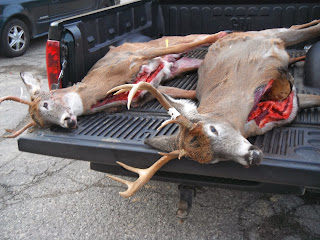 Although mature 4.5+ year old deer make up a small percentage of our herd in New Brunswick, there was a surprising number of trophy bucks taken during this years hunt. I scoured the net and came up with some photos of ordinary New Brunswickers who killed some world-class whitetails this season and I took the liberty of using them in this blog. I'm hoping that the quality of the animals taken this fall from all parts of the province portrayed in the following photos will prove to all that New Brunswick does have big bucks!
The first two photos are from a father and son team that come from a family of serious hunters. I don't know either of these gents personally but I do know Kevin B. AKA "Ridge Runner" from a hunting forum. I have followed his exploits for a while now and if you are into whitetail hunting you probably have crossed paths with this gentleman or one of his relatives. These guys live for the hunt and they have the trophies to prove it. Kevin is involved in anything to do with deer hunting and from what I have seen he does some nice taxidermy work. I was really tickled to see him score on a nice buck while still hunting on a ridge in the snow. His father, not to be outdone, also took a nice whitetail. Here are their 2013 bucks. 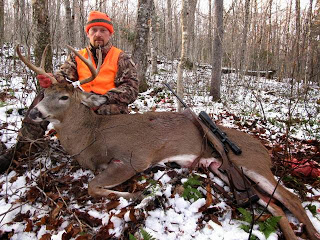 Kevin's buck was 217 lbs. dressed. His heaviest to date. 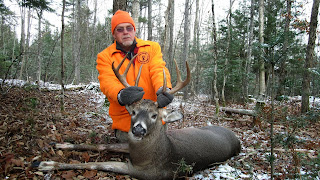 This is his fathers high tined buck.
I also have a photo of two bucks taken on the same day by a grandson and his grandfather. Days like these create memories that last a lifetime. Here is the photo of their two 9 pt. bucks. 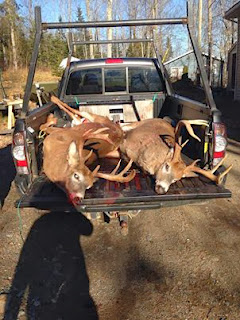 The next photo shows one of the nicest bucks taken this year. I have included two photos so the readers can really appreciate the size of this bucks rack. 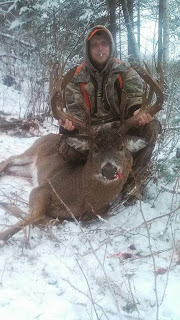 What a trophy buck taken in good ol' N.B. Here is another photo that highlights the rack a bit better. 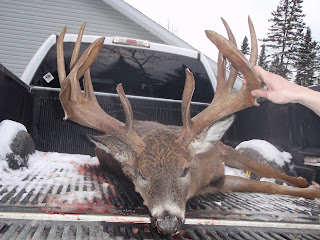 This next buck was taken in southern new Brunswick and sports 16 pts. 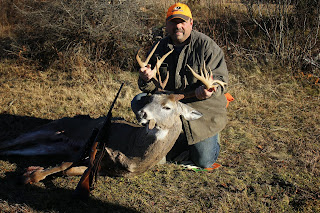 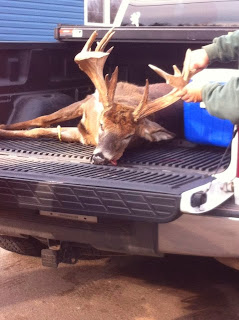 This next buck was taken by a serious whitetail hunter with a few big racks to his credit. It 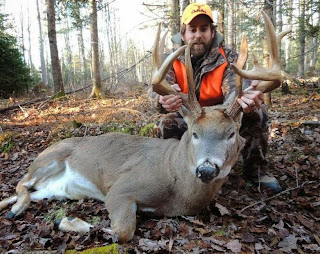 is a very heavy main frame 8 pt. with some junk. This buck dressed out at 240 lbs.

How about some wide bucks with a nice inside spread? 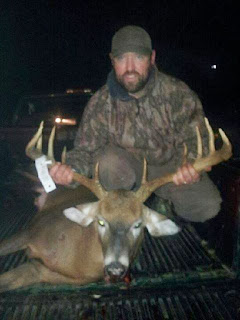 Here is another one with a youngster posing for his dad. 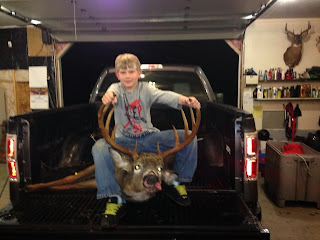 This next buck was taken near Fredericton and has very distinctive split brow tines. 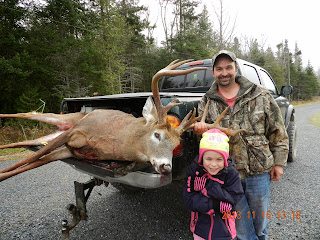 This next buck has great tine length, mass and a good inside spread. Just a great N.B. deer. 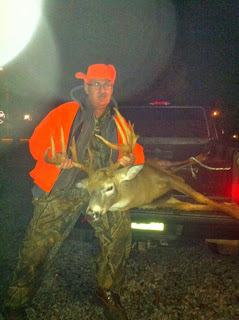 This next buck is an old grey faced smasher with a lot of mass. This buck dressed out at 240 lbs. 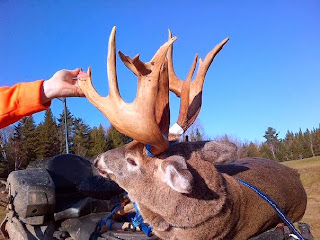 This next buck was taken in southern N.B. and has lots of mass. 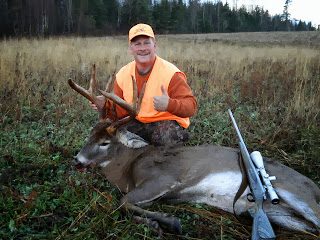 This buck was taken in the northern half of the province and has 9 pts. and dressed out at 228 lbs. 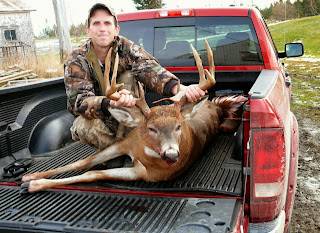 This buck has an unusual rack that has either no brow tines or exceptionally long ones. You decide. 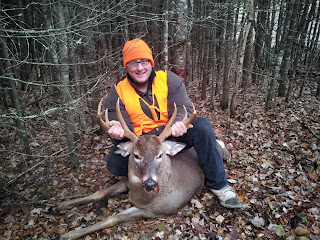 This next buck sports a nice clean typical rack. 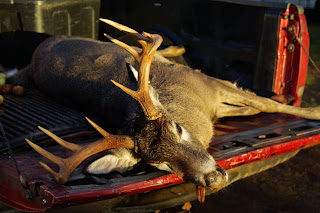 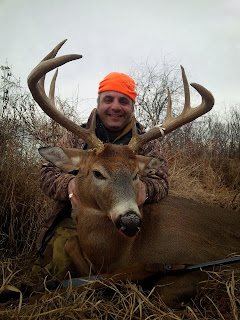 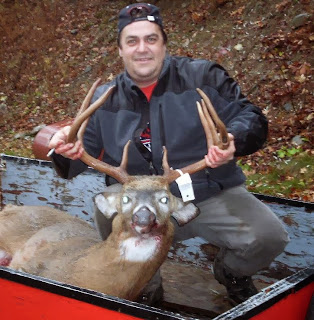 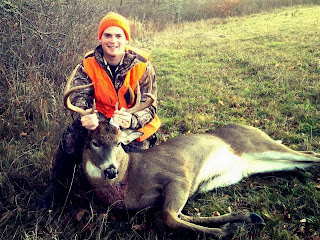 This next buck was killed near Fredericton and has a heavy rugged rack with 18 pts. It dressed out at 220 lbs. 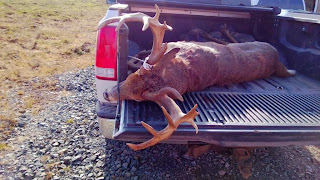 I've got a couple of photos of young lady hunters, one of whom killed her first buck while hunting with her uncle turned guide. From what I can tell "Utopia" is a consistent buck killer and now he has started to help his younger relatives get started on their first hunts. He set his niece up and she laid that buck low! Here is a photo of her first buck. 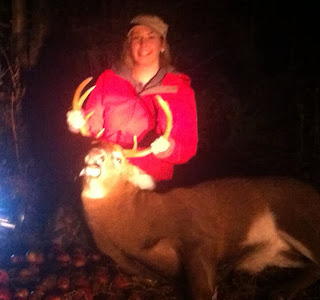 This next photo shows a young lady posing with a nice buck taken this year. I don't know who killed this deer but it's still great to see young women participating in the hunt. 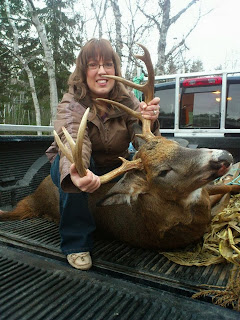 The next photo shows a big 2013 buck being retrieved from the field with a buggy. I thought it was a pretty cool photo that shows a good alternative method for getting a deer out of the woods. 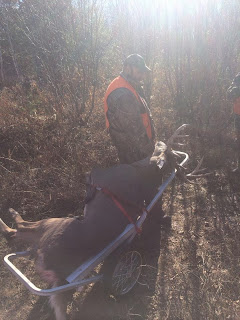 I liked this next photo because again it shows an alternative method for retrieving your deer. This buck was taken in zone 21 this fall and was an 8 pt. that dressed out at 182 lbs. 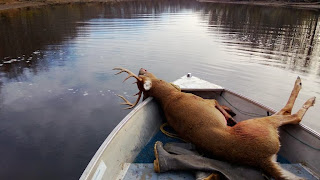 Finally, this is a photo of the deer "Mort" took this fall near Harcourt. This was a young buck that is quite typical of many of the bucks in this age class that were taken this year. A 3.5 year old buck in New Brunswick usually sports a basket or better 6 or 8 pt. rack similar to this buck. As you can see, "Mort" is a little camera shy but we do have the shot of his nice 2013 buck. 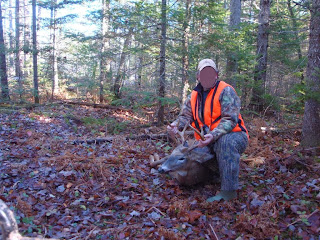 I want to congratulate all the successful deer hunters in the photos for taking some true N.B. trophy bucks. These guys are just regular hunters that all have one thing in common--the love of the hunt. These photos should dispel the notion that New Brunswick WAS a great spot to hunt whitetail bucks. It still is and NOW would be a great time for non-residents to book a hunt for next fall. I can't guarantee a hunter will kill a buck such as those depicted but I can guarantee you will be hunting the core area of bucks like those in this post. Our hunts are not for enclosed deer or boxed hunts. Our hunts are for free range big bucks on their own turf. Fair chase all the way.
If any sport would like a spring bear hunt for trophy N.B. black bears or would like to try a hunt for one of our great bucks, just give me a call to make the arrangements for a hunt in our great province. We run a small operation and the emphasis is on quality. We intend to keep it that way.
In my next post I will be talking about the spirit of the hunt, turkeys and predators.
This is Dale Bauer saying "Happy Trails to You.....Until we meet Again!"