The air is taking on a chill at night  here at home on Salmon River and this heralds the coming of hunting season. Normally the height of the water in Salmon River and Grand Lake is at a decent level for most outdoor activities but this year Mother Nature has blessed us with an over abundance of the wet stuff. This can really make life difficult for guides and sports alike but you have to play the cards you are dealt. I know most salmon fishermen won't complain too much about the high water because at least it helps the salmon with their spawning ritual by allowing the fish to reach the best spawning areas. I took the following photo from my shore after yet another downpour. 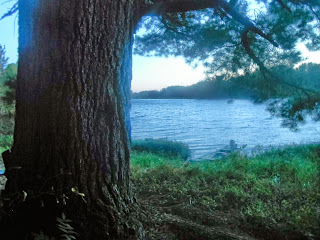 It's been a big job just keeping the boats bailed out and secured this past month. There are still hopes for a good fall run of salmon and one of my buddies is off to his camp on the Tabisintaque River. He tells me that this river is starting to prime up and he wants to be there when the first good runs arrive. Some reports are coming in suggesting the fall run is starting on the Miramichi and the lower Cains River so don't put your salmon gear away just yet because you could miss out on some very good fishing if the weather starts to co-operate.
We have been trying to get in some more pickerel fishing between the rain storms but if I told you the fishing was good I would be lying. Pickerel fishing is very dependent on the water level and if the water is too high the fish will be scattered about and hard to find. That being said, if you have the patience and the right gear you should be able to hook a few. It's kind of an iffy thing in these conditions but I have seen the fish attack anything thrown at them and then stop just as suddenly as it started. Sounds like Atlantic salmon doesn't it? Here is a video clip of me landing a pickerel on my last outing.

Pickerel are feisty little fighters that attack the lure with a savage rush but they tire easily and can be landed fairly quickly IF you can keep them on because they are notorious for throwing the hook back at you and swimming away at a leisurely pace. I love to fish salmon but if I want to have some fun and just catch fish, I grab my box of lures and head for the pickerel beds. The next photo shows me landing an average sized pickerel. 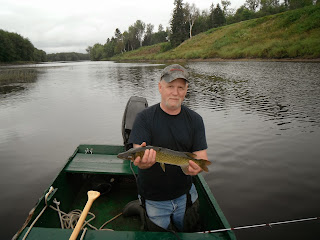 The moose hunt is coming right up as I'm writing this and unfortunately we don't have any tags this year. I won't complain though because I've been on the hunt the last two years and harvested some very good moose meat both years. As most people who read my blog knows, I'm not a trophy hunter, per say. I like taking trophy animals as much as anybody but I like wild meat and you can't eat the horns! So I will usually take the first adult animal I am licenced for. If I am trying for a specific animal I will sometimes let other animals walk but that would be the exception rather than the rule. The next photo shows me with the young bull I harvested last year. 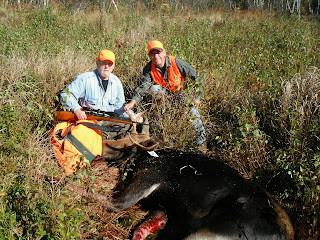 I had a brief stop at the cache in Chipman to see how the count was and one ranger told me that at the half way point in the season there were four more moose registered this year than at the same time last year. Cory Shirley registered the first moose in Chipman. My neighbor up the hill, Greg Best, took a nice twelve pt. bull from the Mountain Brook area in Gaspereau. A large bull was harvested by Sam Williams Jr. in the Bronson area that had eighteen points and went over 800 lbs. At this point the season is shaping up to be a good one.
With the start of duck season just around the corner, many hunters that I have been talking to have expressed disappointment in the high water causing a dearth of food in the larger meadows this year. Usually, on a year such as this, the best hunting will be found by jump-shooting the smaller back guts and beaver ponds because that's where the food will be found. When the migration starts the bigger meadows will start producing as the big flocks will use these areas as resting and staging areas. The jury is still out on how good the duck hunting will be in our area this year because although we had good nesting conditions the ducks are feeding in the smaller areas so they can find more food. The next photo shows old Maddie with the ducks we harvested on the first day of last years duck hunt. 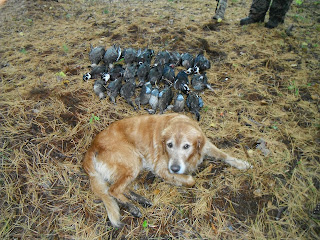 I always enjoy the camaraderie that accompanies any of these hunts and my good friend and long-time guide Allen Davidson has accompanied me on many different hunts over the years. Many times Allen will act as the chief cook and bottle washer if he isn't guiding or shooting and the next photo shows him and I taking a break on one of our duck hunts 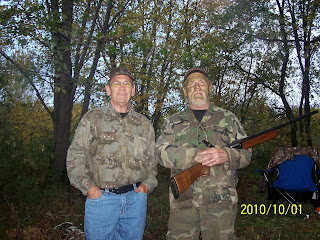 I have been checking some areas lately that I hadn't visited for many years and I was surprised at how quickly these old abandoned farms had grown over. In places where there had been open fields in many cases they were choked full of brush and small trees. The apple trees and thorn berries were still there but the patches of clover were getting scarce where there used to be fields. After finding the perimeter of the fields where the old homestead used to be,I took a walk around the edge following the large piles of rocks that had been removed from the fields many years before. From the amount of rocks in these piles someone did a lot of manual labor removing these obstacles to their ploughing efforts. The next photo shows one of these piles with a large tree growing from their midst. My guess is these piles were made 75-100 years ago. 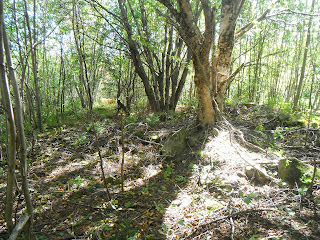 Although I was checking the area for grouse, I did come across a huge amount of bear sign. This didn't surprise me because these old abandoned homesteads are a food source for just about every animal in the woods. Since our bear population is quite high now, they have been hitting the apple orchards hard. There are a lot of thornberry bushes and cherry trees mixed in with the apple trees and this is a veritable smorgasbord for many animals that frequent these areas. The next photo shows one of the many piles of bear dung we found in the area. 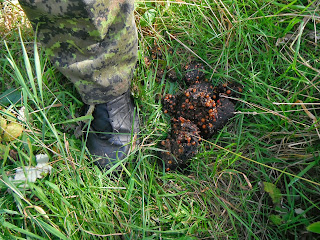 While scouting the perimeter of the fields my buddy called me over to see a large deer scrape from last year that was located on an old tote road. After taking a closer look I mentioned that the buck had been back already this year because there was a fresh track in the middle of the scrape. He hadn't opened the scrape up yet but he was definitely was still travelling the same route. This looks to be a good sized buck by the size of the track and we'll be keeping a close eye out for him in the coming months.
This has been a great year for wild mushrooms and I always watch for any edible ones that might be popping out. I happened to spot a patch of chanterelles growing near my house. These mushrooms are delicious but caution must be exercised when eating them because they can be too rich for some palates. I really like them with steak or eggs when picked fresh off the stem. I like to cook them up crisp and I try not to gorge on them when having them as a side to the meal. The next photo shows the patch I found. 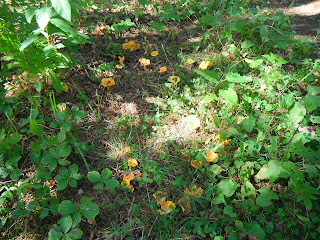 This variety of mushroom is usually found in the company of others so look around a bit whenever you find one. I also came across another variety of edible wild mushroom while travelling the woods this month and this colorful shroom is called a lobster mushroom because of its color and taste. These aren't quite as common as other varieties but are highly sought after all over the world. The next photo shows a small patch with a variety of shapes. 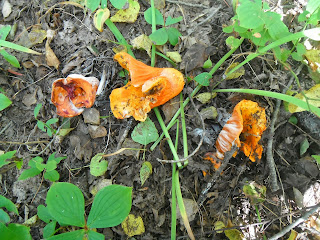 I have been finding some nice vintage outdoor related items and I can't resist buying this stuff whenever I come across it. Although some of the stuff I find isn't strictly related to hunting and fishing, it is usually related to the outdoor world somehow. If you have read any of my previous blog posts you know I am partial to all things ducky and for this post I want to show a photo of a beautiful gold trimmed plate with a picture of mallards in flight. I believe this plate is Canadian made and dates to the Fifties. My son Curtis picked this plate up for me during his travels and gave it to me. 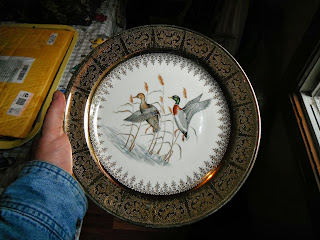 The next item I have to show is a small shelf decorated with a duck in flight. I'm not sure of the date of manufacture of this item but I feel it may be from the Sixties. 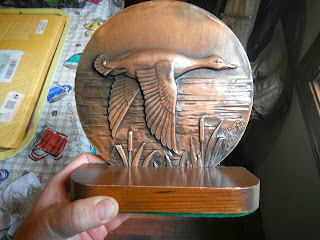 Finally, I have a photo of some very nice dry flies that were tied by one of the well known guides who lives at the mouth of the Cains river and has guided for about fifty years for various outfitters and mainly for Black Brook  at the mouth of the Cains. I'm not sure when Malcolm McCormack tied these flies but at eighty-three years young I wasn't going to question the vintage of these flies. Thanks Mac for passing these flies along. I almost hate to fish them but I think at least one or two will get swung through a pool somewhere. I'm hoping to get out for a fish with him in the near future and see first hand how he fishes them. He tells me he
fishes these flies exclusively for salmon and says the trout like them too. I'll take you at your word Mac and thanks again. 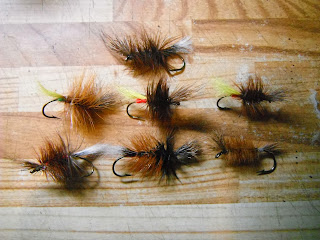 Ken and I have been out and about every chance we get and if there are any folks out there that would like to travel with us in the woods or on the water in our beautiful part of New Brunswick just give me a shout and we will arrange a trip in whatever style you would like for whatever species you would like.
This is Dale Bauer saying " Happy Trails to You.......Until we Meet Again"