February is a short month and Ken and I are eagerly waiting for the longer days of spring, which is just around the corner. Since this is a short month ,plus the fact my computer earased half of my post,this month my blog will be short and sweet. February is a month for ice fishing tournaments and at least three were held on the waters of the Grand Lake system.

The first tournament held this month was the Paul Gallant Memorial Tournament held on French and Indian Lake. This is the fourth year for this event and it is always well attended,with over one hundred participants registered this year.Many ice fishermen like this tournament because it has easy access to the lakes via the Sand Point Road and the Mill Road. There are some good prizes and it is a well run tournament with very capable volunteers. Prizes are given out for the biggest pickerel and the largest perch. One of the locals,Dale G. took most of the prizes. I guess being a local gave him a decided advantage.

The village of Minto held its annual tournament at the Key-Hole on Grand Lake,near Princess Park. This is a mostly ''for fun'' tournament aimed at getting youngsters and their parents out on the ice for a day of fun and free hot dogs and beverages. This event is also well attended and the selfless dedication of the volunteers guarantee a good time is had by all. The weather co-operated this year and there was lots of ice and many anglers drove their vehicles right to their angling spot. This made a lot of the older anglers happy and kept the little ones interested long enough to land a few fish and get a hot chocolate and a hot dog. The following photo shows a group shot of the volunteers who make this event happen each year. 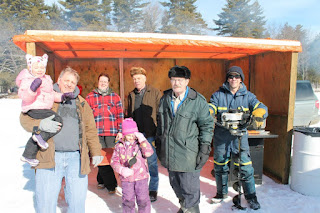 There were folks fishing all over the length and breadth of the Key-Hole trying to find that hotspot where the big pickerel were waiting.The next photo shows some of the participants fishing in this years tournament. 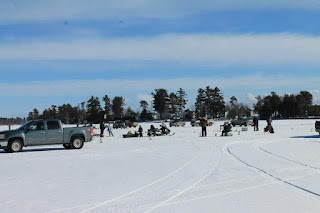 The Key-Hole has always been a good place to fish for pickerel and perch because of the lower water level and the vegetation growing along the edges.This area has pickerel beds that are perfect cover for both of these species and we have always done well fishing in this area. The next photo shows Jack Trembley serving up some hot-dogs to some hungry fishermen. 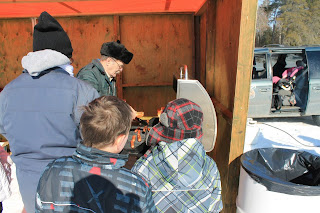 Jack is from the Minto/Grand Lake area and is a tireless volunteer for events such as these. I also would like to mention Brian Glenn's name because he has been instrumental in organizing this tournament for several years now. Without volunteers such as these folks,many good events like this involving kids and parents would fall to the wayside. The next photo shows a couple of the winners at the conclusion of the tournament. The big smile on the youngsters face says it all! 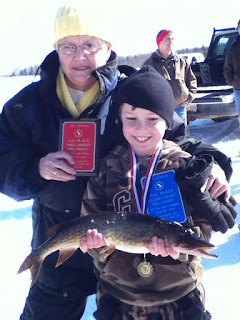 There was also a pickerel tournament the same day,unfortunately,at Indian Lake. This event was located at the end of the Mill Road and is privately sponsored. Usually,tournament organizers try to hold their events on week-ends that don't conflict with each other but the kids tournament put on by the village of Minto had to be re-scheduled because of bad weather. This tournament has been held for a few years now and participation is growing each year.Indian Lake has lots of pickerel habitat so the deciding factor in this tournament is the weather. This can make or break any tournament and when the weather co-operates,you can count on a good turnout. This tournament is geared towards adults, with a percentage of the entrance fees given back in prize money.
If you are a sportsman who enjoys ice fishing,the Grand Lake system has a variety of species to pursue. If you choose to fish Grand Lake,look for the right habitat that holds the species you are after.By that I mean if you are after pickerel and perch find shallow coves with vegetation where bait fish can hide. If you are after smelt and whitefish try fishing the main channel near Goat Island. This has been a very productive area in the past and there are usually a dozen or so shacks located near the island. One access point is at Whurs Beach. If you are looking to hook some burbot,almost anywhere on the lake will produce some of these tasty fish. Be advised that these fish feed mainly at night and be sure to use a good gob of bait when angling for this species.
In a nut shell,use lots of chum. Fish the right habitat and use live minnows whenever possible. Make sure to use small hooks for whitefish and if you hook one don't use a hard hook set because they have very small mouths that are paper thin. Above all,use caution when travelling on the ice because nearly every year someone goes through and it gets quite expensive to get hauled out of the water in the middle of winter. It's also quite dangerous.
Look for a more detailed post next month that will hold a couple of surprises for any sports who read this blog. Until then,this is Dale Bauer saying''Happy Trails to You.....Until we Meet Again!
at February 28, 2013 No comments: