HOT FUN IN THE SUMMERTIME!

The weather this month can be described in two words-hot and dry! This weather is loved by most vacationers but if you are a trout or a salmon fisherman,you are probably wearing a frown and praying for rain. The long range forcast isn't showing much relief in the coming week so the salmon fishermen will just have to wait it out or target other species. The DFO has closed many of the cold water pools and this is a good thing. Our salmon are in survival mode at this juncture and they don't need the added stress of fishermen pounding flies over them during this hot,dry spell.
Although the fishing has been poor for our cold water species this month,the pickerel bite has been red hot!We have been out nearly every evening casting lures over the pickerel beds and catching dozens of nice, trophy sized pickerel. These fish have been smashing just about everything thrown at them but they are showing a preference for gold spinners and double- tailed leeches,as usual. Many times the pickerel prefer dark colored leeches but we have been having the best sucess with orange colored ones.The following photo shows a nice fish taken with the rig I have just described. 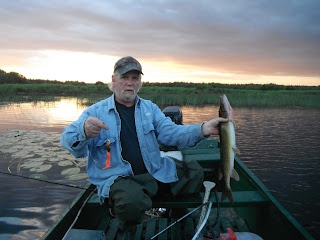 As you can see from the photo,we are catching some very nice pics during our outings. This size fish is quite common in our area and we encourage all fishermen to catch and release most of their fish,other than an occasional one for the table. It takes 4-6 years to grow a pickerel to this size and it's a shame to keep them just for bragging rights. Thats what your camera is for! Take the picture and put your fish back to catch another day. After all,the fun is in the catching,not the killing! The next photo shows Donna A. with a very nice pickerel taken one evening last week. 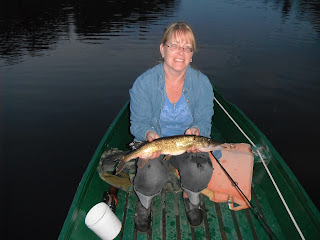 We have really been taking advantage of the hot weather this year by swimming and sunbathing on the sand bars and small beaches during the heat of the day and fishing the pickerel beds during the cooler mornings and evenings. The calm period just before dark has been a very productive time to get lightning strikes from large pickerel on top water lures and shallow running spinner baits. The next photo shows Jamie with a nice pickerel taken while fishing with his girlfriend,Brooke.Lately,Brooke has been outfishing everyone but not on this night. Jamie caught a dozen or more and lost as many on that night and Brooke was having equipment problems.Kind of. 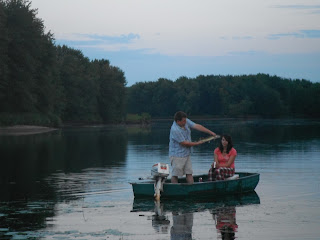 I'll have to give her credit though.She's either got a whole lot of beginners luck or a real good guide. I'm thinking maybe it's a little of both but whatever the reason,she has been catching some very nice fish. The next photo shows Brooke with a nice trout she caught in one of the ponds we fish close to home here on Salmon River. 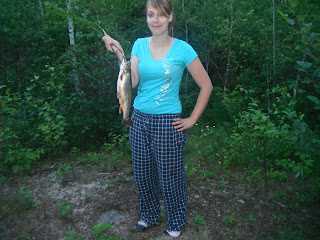 Brooke kept this fish for ol' Wes and he was very happy to have it. Wes just loves wild fish and game but it's hard for him to get out now because of his age but the younger ones always bring him a feed whenever they get some weight in the game bag. This short video clip shows one area we fish on Salmon River. We have also been fishing for eels at night and we have a ball doing this every summer. We usually fish from my shore and have a nice bon fire,along with some food and beverages. This is a laid back type of fishing and we usually fish three or four rods baited with fresh fish or a big gob of worms. We just cast our lines out and check them every so often to see if a fish picks up the bait. We usually catch both eels and catfish using this method. The following photo shows an eel we landed one night last week-end. 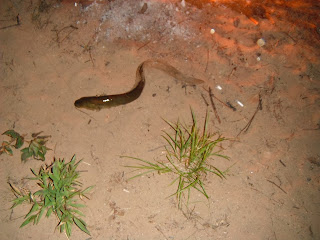 Our day trips on the river start at eight a.m. and run until twelve noon. Your lunch is provided from eleven until twelve.You are on your own to explore,swim,suntan or just relax in the shade until four p.m. when your guide will pick you up and provide your supper before taking you out for the evening fish. Your trip officially ends at eight p.m. but sometimes everyone is having so much fun, the time runs a little longer,especially when the bite is really hot. This is a great adventure and the cost is very reasonable,especially when you consider the fee covers two people.
The 2012 moose draw results are in and again this year there is joy in the Hargrove and Bauer camps. Wesley Hargrove got his tag again this year after getting a tag last year. Wes and the boys had great luck last season and they are hoping to fill two tags like they did last year.Wes' son-in-law will be joining the hunt this year and I'm sure they will do well. Ol' Wes wasn't the only one to have a little luck this year. I drew a tag for the first time in thirty-five years! I nearly forgot to enter the draw when Brooke reminded me I could still put in on-line before midnight. I'm sure glad she did because I had been waiting a long time for another tag. I've been fortunate enough to be second gun on a few hunts and last year I took Wanda Doherty out and we got a nice cow on the second day. There was a couple of nice bulls in the area so I think I will hunt the same place as last year and hope that the weather will be a little cooler this year. The Hargrove clan plans on hunting the Harley Road cuts. They have taken some nice moose out of that area,including the two they took last year. Watch for updates on the coming 2012 moose hunt in future blogs. The signs are pointing to another very good year.
The white-tailed deer population in our area and parts south are showing an increase in numbers. We are seeing many more yearlings and this years fawns in our travels and if we could manage a couple more mild winters,our numbers would really be on a rebound. Lets keep our fingers crossed!
We are seeing a lot of ruffed grouse with large clutches of young ones. This usually means more birds in the fall and better chances of running into large flocks of young of the year birds. Jamie is in the process of breaking his English setter and he figures there will be on a lot of woodcock and partridge this fall. Jamie has lots of covers he can hunt that we have found through the years and I'm sure he will be into lots of birds this coming October.
I got a visit from a friend that picks antiques and collectibles and he sometimes has some good stuff that I'm interested in. He had a great little camping stove that he picked up and he thought I might be interested in purchasing it. I looked it over and it didn't take me long to seal the deal.This little camp stove is in great condition. As far as I can tell,all the parts are there and in good condition.The following photos show just how good the condition of this little item is. 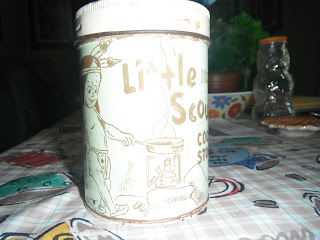 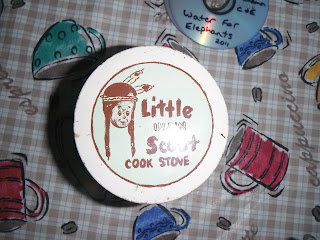 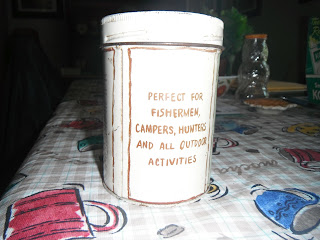 This little camp stove was manufactured in the Fifties.
The next item I picked up this month was a nice cast iron panel that I believe was part of a box stove. The panel depicts a woods scene with animals,birds and woods workers. I am not sure of the age or manufacturer but it would display very nicely in a camp or man-cave. 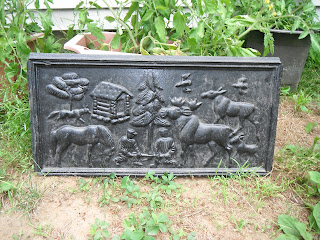 If any readers are in our area and would like a guided day on the water or in the bush, just contact me at your convenience to arrange your trip.
This is Dale Bauer saying "Happy Trails to You.....Until we Meet Again"
at July 30, 2012 No comments: