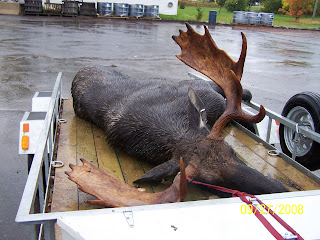 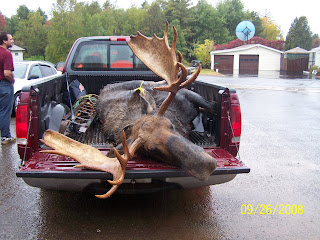 Once again New Brunswick moose hunters have had a very successful season.Although the season is quite short at three day's,the weather leading up to the hunt was perfect.The temperature dipped down to the freezing mark for three days leading up to the hunt and this seemed to have triggered those big bulls into the rutting mode.I was very pleased to see some great bulls harvested this year,even though we were shut out of tags.Ken travelled to his cousins place to help them on their hunt and they harvested a young four pt. bull.Although their moose did not measure up to the one's in the photo's in this post,their moose will be great eating.As I told one hunter who was registering a young bull,any moose is a good moose,during this short hunt.Moose cover large territories and they can be here today and gone tomorrow,especially when all the hunters head for the woods at the same time while setting up their camps.Some hunters concentrate on one area and sometimes one specific moose,while others try to cover as much ground as possible in a short time.Both methods have advantages and disadvantages and the two moose shown in the photo's were each taken by the two different methods,so as you can tell by the size of these trophies,both ways of hunting work well at times.The large eighteen pt.on the trailer was taken by Ben Caissie of Bronson.Steven, if you are reading this out there in B.C.,your Dad was one happy camper after downing this great animal.This is not the first trophy bull old Ben has knocked over,along with pleny of nice deer through the years.Ben told me his last bull weighed in at eleven hundred lbs.and he thought this one would rival that bull in weight.But the DNR no longer weighs the moose when they are registered.They apply a formula by taking a measurement of the nose and estimate the weight of the moose.Sometimes this method does get a good estimate,but in Ben's case,he figures DNR's estimate fell short at seven hundred pounds.I have to agree with Ben.This was one very large bull!The bull pictured in the half-ton truck was taken by Phillip Roy of Minto.This bull is a true trophy,with a great rack that wiil take its place of honour on Phillip's camp wall beside the mount of a tremendous buck he took a few years back.These two fine bulls are just a sampling of the trophies taken in the first two days of the season.I saw at least four other bulls of this calibre on the first day of the hunt while making the short drive from Chipman to Doaktown.Although there is some controversy each year about the native hunt,which usually takes place the week before the regulated hunt,DNR has managed to increase our moose herd to the point where their numbers are starting to become a nuisance in some areas.According to Sterling C.,our liason man at DNR,there were approximately twenty-five moose registered at the cache in Chipman this season.So a tip of the hat to our NB DNR for doing a tough job and making it work. On a different topic,we are getting the rain we have been waiting for,but I don't think we needed quite that much.This will move the fall salmon up the rivers and will provide some great angling opportunities in the coming weeks.We have a large group coming in for the duck hunt on Oct.1 and we should have some good shooting by the looks of things.It seems our grouse numbers are down this year.I predicted our prolonged cool wet spring would take a toll on the chicks and it appears to have done so.But there will still be enough around to provide some good shooting,so don't let the lower numbers stop you from getting out there.Ken and I have been seeing some really good buck sign while setting out baits and placing stands.If the weather stays good,it should be a banner year for those big old Northern Whitetails.Ken and I can hardly wait to get our sports out there to knock over some of these big boys that usually just perish in the big woods and are never seen again. Until next time,keep the wind in your face and go slowly! We hope to see you out there soon!
at September 28, 2008 1 comment:

Fall is in the Air! 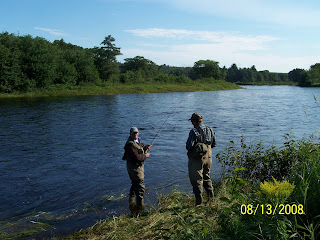 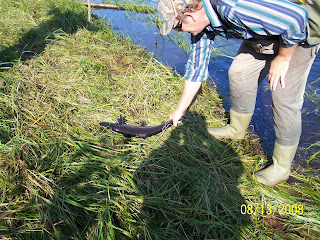 At the risk of boring some readers,I must say this has been one heck of a year for our Atlantic salmon.It has been non-stop action for most of the season so far this year,and the fall run of fish has arrived on time.Some of the old-timers had voiced concern over the fact that the water has stayed good all summer and they feared that all the fish had entered the system and there would only be a trickle of fall fish.Not so! As I write this post,there are literally thousands of salmon,many of which are over twenty pounds,entering the Miramichi River and its tributaries.I just arrived home after a great trip with two close friends and we were not disappointed.Stafford B.of Storytown and good friend and fellow guide Allen D.of Chipman and myself had a great time raising fish and losing some,as well as landing a couple.Stafford landed a beautiful grilse,silver and fresh from the ocean.After the fish have been in the river for a while,they will start to darken down,so if you get one that is silver in color,you know it is a fresh one!I hooked and released a nice salmon of twenty lbs. and raised another half dozen fish that just wanted to take a look.Allen also had a few come up for a look,but they can be quite fussy about what they will take.Most of the action has been on small black bear hairs and large bombers fished dry.This is where your guide can make the difference in your sucess or not.The water conditions dictate fly size and pattern,and your guide should be able to assist you with your fly selection so you can increase your chances of a strike.But these fish can be very frustrating!.Can you imagine having giant Atlantic salmon jumping and rolling all around you in the pool and not getting a strike? Get used to it! It happens all the time,but with persistence and lots of patience,after a while a fisherman will be rewarded with a strike from the greatest fighting fish in the world! I have to laugh when someone starts comparing the different game fish and their fighting abilities.There is no fish that swims in fresh water that can fight like an Atlantic salmon.Period. That being said,the lowly chain pickerel provides many more hook-ups and I can honestly say I enjoy fishing for them almost as much as salmon,just because you are almost guaranteed to see some action. With a change in the air and fall slowly creeping up on us,we are getting our fire-arms ready and we are starting to do some serious scouting for big-game.My neighbor across the river held his hunt for field geese and his group harvested twenty-two geese.This is less than last years hunt at forty-eight,but they still had a good hunt.Although we have no tags for moose this year,my buddy George P. practically begged me to come to his moose camp and call for him! Don't worry George,we'll be out to visit you and I'll bring along one of the best callers around,Allen D. Allen was taught to call by an old-timer,Bob McBeth.Old Bob is gone now,but he taught Allen all he knew before he passed on and Allen in turn taught me how to call.I will have to talk more about Allen's exploits in the bush on a later post,but I will tell you Allen's biggest buck dressed out at three hundred lbs. Allen likes to take them in the neck and that's just what he did with this buck as it was running away from him looking back as it ran down an old logging trail.Allen is an excellent guide and a very good friend and I will be talking more about him in the coming weeks.The birds are starting to flock up and the bucks are starting to lose their velvet and are getting their hard horns.We will continue to make trips to the Miramichi for salmon,but we are also starting to set up for those big North Woods bucks,so keep posted aned give me a call or shoot me an e-mail for more information on what is happening in our beautiful part of New Brunswick!
at September 14, 2008 1 comment: