'THE TIME'S THEY ARE A CHANGIN' 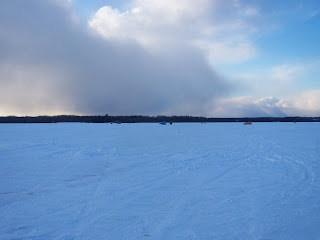 This is my first post in the new year and I can't help but comment on the current state of affair's in the financial world. The mighty USA has shown once again it's capacity to rise above it's differences and has elected a great,historic leader at a time in it's history when it most needs him.Oh yeah,did I forget to mention he's black? This new president has challenges that will quickly test his mettle and I believe he will meet these challenges head on. The corporate money-mongers have thrown the world into a mess not seen in a hundred years. Now you may say "What does this have to do with sportsmen here in New Brunswick?" Plenty.It just proves once again that human greed within souless corporations do not have the moral compass that is needed to guide them in their never -ending quest for increasing profits. We are seeing the results of this mind-set in the way our forests are being managed. The newly released "Erdle Report" on how we should manage the forest on our crown lands suggested several options on how to proceed,but the government bent to the will of the large forestry companies and chose what has been called "Jaako-Poyre Lite",which means the government chose that report,but added in some diversification in a feeble attempt to pacify the citizens of New Brunswick.The Jaako-Poyre report was soundly rejected by the citizens of New Brunswick and still the government went against the will of the people and adopted it as the best plan for the people.NOT! Until we have a plan that eliminates huge clear-cuts of single species and the spraying of herbicide to kill the young hardwoods that the animals require for forage,we will continue to see many species struggle to survive and increase in the type of environment the government is providing for them. I can only hope I live long enough to see the people of New Brunswick rise up,as did our neighbours to the south,and elect someone who will do what's right,something for the animals,the environment and ultimately for the citizens of our province.Until then,I would encourage all sportsmen to join your local wild-life organizations and be vocal in what you want and be organized in your endeavours for change! I had promised myself I wouldn't use this blog for political dialogue,but January and February are typically very slow months up here in the Big Woods,and this year was no exception. January was such a cold harsh month we barely ventured out at all.The pickerel fishing has been good,as usual.The white fish have started to bite, along with some nice Burbot being taken.We are starting to see some winter kills by the coyotes and we are just starting into their most vulnerable time of the year.Our deer herd needs two things to happen in order for them to increase their numbers on crown lands.First,something has to be done to control the numbers of coyotes and secondly,suitable wintering habitat must be cultivated for the deer.If these things are done,our deer numbers will increase,relative to the effort put forth in these two areas. Although this post has a lot of doom and gloom in it,I would like to point out the black bear population is high and this years spring salmon season should be one of the best in memory.Ken and I are offering some very good deals on both of these adventures,so just shoot us an e-mail or give me a call and we will provide you with all the information you need for a trip to New Brunswick's great North Wood's!
at February 19, 2009 No comments: