Kid's and Fishing Go Together! 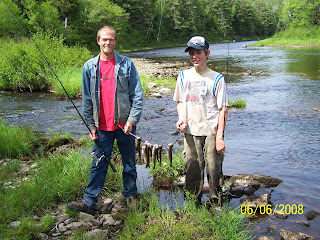 So far this month,June has not disappointed the sportsmen here in the Grand lake area. There have been some really good runs of fish in the local rivers and streams. There are reports of bright fish arriving on the Miramichi River system,with salmon and grilse being hooked up and down the river from Blackville to Boistown. Again this year,the sea-trout run in the Miramichi and it's famous tributary,the Cains River,has been nothing short of fantastic.Many observers say that the run of huge brook trout up these two rivers has been increasing each year,especially since restrictions have been placed on the harvesting of these special trout. I'll say it again"Conservation does Work!" I'm old enough to have seen both sides of this coin,having fished both of these rivers with my uncles and brothers back in the days when it was all hardware and live bait,with no size restrictions. Today,most sportsmen cringe whenever I mention this fact,but it was simply the times.We didn't know any better. Today I'm happy to say that we have a good balance of conservation of the resource,as well as recognizing the fact that sportsmen should be allowed to keep at least one fish for the grill or the wall.It's a win-win situation. By all accounts,the spring bear season was a very sucessful one for all sports participating in this hunt.New Brunswick is crawling with bears and each year harvest targets are not filled just because not enough hunters are participating.There is very little interst in bear hunting by local sportsmen and the outfitters are scarcely putting a dent in the population,so the numbers basically fluctuate up or down based on the bounty provided by Mother Nature. I had my son and another young lad out last night for some fishing on Salmon River.We caught a dozen or so pickerel over twenty inches,as well as white and yellow perch. We had a ball! There was lots of wildlife around with ducks and geese leading around newly hatched little ones. We also spooked a nice deer on the island when we stopped for a break. Eagles and osprey were soaring by,marsh hawks were floating over the islands looking for a snack and beavers and muskrats were zig-zagging back and forth on the quiet evening water. Ken and I really enjoy going after big pickerel.They are considered a trash fish by many of the purists in this part of the country,but on those lazy hot days of summer when the salmon and trout are laying in and won't take,the pickerel will many times attack a surface bait like torpedoe just under the surface. This is great fun for sports who want some action instead of beating the water over fish that will not take. The picture in this post is one of Ken and young Ivan R. with their catch of brook trout at the mouth of Pleasant Brook.Although Ken is a bachelor,with no children of his own,he really gets a kick out of taking young people out on an adventure and seeing the excitement of them gettin into some good hunting or fishing. We ended up with some nice trout for the pan and old Wes had a nice feed for supper. It was a day of smiles all around and memories for a lifetime. Hope to see you all out and about in our great outdoor world sometime in the near future!
at June 17, 2008 No comments:

The Fish are Running! 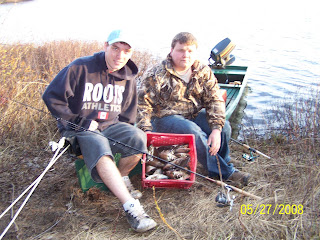 This past week there has been lots of fishing action on the rivers in this area. Salmon River and Gaspereau River have seen a nice run of brook trout and the shad and white perch are at the peak of their run up the Salmon River.On the Miramichi River,the sea-trout are starting to run and the Rocky Brook salmon are being hooked below Doaktown by some of the guides,who are fishing while waiting for the main runs to enter the river. Jamie and friend Randy-Michael were out for a couple of evenings this past week and limited out both nights. The white perch in Salmon River will school up at the mouth of the brooks and in the deep holes and the boys took full advantage of this fact.All their fish were of an average size,just right for some tasty fillets. Ken and I took two young lads from Brigg's Corner into the mouth of Pleasant Brook for a day's fish for brookies and the boy's did quite well,catching a limit of nice sized brookies for the pan. The boy's really enjoyed themselves,even though it's quite a hike in to the mouth of the brook. I took the fly rod and hooked and released about a dozen trout,while the boy's used spinning gear and worms to catch their fish. The flies are especially bad this year. Some of the old-timers say this is because of all the high water we had this year.Bug jackets or head nets are recommended if you are fishing or hunting this time of the year. The fishing is hot right now,so get out there and get in on this great fishing! Oh,and by the way,take a kid with you when you go on your adventure.Someday he or she will thank you for it.
at June 07, 2008 No comments: