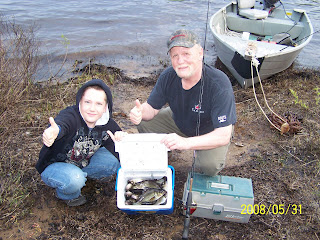 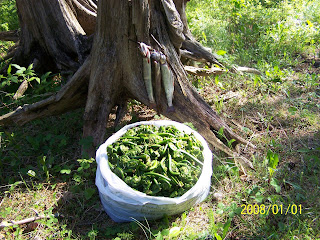 This past month really flew by,with the weather finally starting to co-operate,the fiddleheads started to pop out and the trout started to take a little better after the water warmed up a bit. Ken and I got out for some pan trout and we got a nice bunch of fiddleheads at the same time.We usually go all out when we go for the fiddleheads,but we had quite a few left over from last year,so we didn't hit them as hard this year.Those pan size trout really go good with a feed of fiddleheads and we always try to have a cook-out along the stream to start the season off. The sea-trout are starting to run and there have been some huge specimens taken in the last week or so.A five lb.er was taken in the Bartholemew R. and a couple of three and four pounders have been taken in the NW Miramichi. One of the outfitters on the main SW Miramichi took a huge sea-run brookie,over five lbs.,this past week-end and he says it is going on the wall.I can't say I blame him.A fish like that is a catch of a life-time,even for an outfitter that is on the water most of the season.The sea-trout are starting to run in the Cains River,and we will be fishing for them in the evenings this week. These fish many times will travel through quite quickly,so you have to get right on them when they are moving or you will miss them. These trout are on their way to their spawning grounds in the headwaters of their home streams and if the water is a good height,they don't fool around,they will run right through and are easily missed.I have one report of a Rocky Brook salmon being taken,but it's still a little early for them,but they act much like the sea-trout,running right through,given good water. This strain of salmon is quite hard to catch,but if you do hook one,you are in for a great fight! These fish are short and thick and very strong,so if you happen to hook one,hang on and hope for the best! The other photo is one of myself and my grand-son,Tyler, with a nice bunch of white perch we caught before dark last nite. The river is full of them right now and we were catching them on every cast.White perch require a very light touch in order to hook them.We just cast into a deep hole and let the worm and spinner slowly sink to the bottom and one will usually pick it up before it hits bottom. If you cast and reel in too quickly,you won't get a nibble and you might think there are none present.So if you go after this species,think SLOW. The bonus with white perch is the delicious fillets they provide.I actually like eating them over a trout. We usually try to get enough that we can do up bags of fillets while they are running.That way,we can enjoy them all summer long. This species is considered a game fish and is subject to bag limits,so make sure you have your licence and know what the limit is,so you don't get in trouble. On that note,I would suggest ALL sportsmen familiarize themselves with the rules governing the water AND the species you are pursuing. Sometimes this can be a little complicated,but it is up to you to know and understand the laws because ignorance of the law is no excuse! I know many of the local DNR guys and for the most part,they are a good bunch of guys that will usually give you a break,especially if it's a minor offence AND they think it's a dumb mistake,but don't look for any favors if you are breaking major laws or repeatedly breaking minor laws.These guys have a job to do and they WILL charge you.So be smart,know the rules and if you aren't sure ,ASK,because taking a chance just doesn't cut it.

The bear season is in full swing and some nice bears are being taken,but no real monsters yet.There is still three weeks left,so I'm sure someone is going to take one of those sneaky big boys. These bigger bear require a little more patience,they've been around for a while,so they are a little more cautious.But with some perseverence,they can be taken.I guess that goes for most of the fish and game we pursue. So get out in the bush or on the water and have at it.Just give me a call or shoot me an e-mail if you are interested in some good fishing or hunting in the Big Woods of New Brunswick and we will have you on the game,pronto!
at June 01, 2009 No comments: