The winter of 2011 started off pretty good,as far as New Brunswick winters go,but the last few days have jolted us back to reality. Snow and freezing rain and more snow and cold weather to come later in the week will challenge even the hardiest of outdoorsmen. Normally,we have enough ice to try fishing some of the back guts and ponds on the lower Salmon River but this winter has been so mild up to this point,we just don't dare to chance it. That will all change after the cold snap that's forecast for next week and hopefully we can get out and set some lines to break up the boredom that usually sets in at this time of the year with the conditions we currently have.
Most sportsmen here in New Brunswick have been keeping their fingers crossed in hopes of a decent winter so our deer herd won't get hit too hard. Our deer kill has been down significantly the last few years because of the harsh winters we have been burdened with and despite having a very good winter last year,the nay sayers are forecasting doom and gloom already for next season. I will reserve judgement until a lat
er date because I usually try to stay optimistic unless it's just too obvious to ignore.
There has been a lot of talk lately on New Brunswicks premier hunting forum,nbhunting.com,about how our crown lands are being managed.Many hunters are now starting to realize just how poor a job the big forestry companies are doing managing OUR forests.The big problem is the forestry companies are managing for wood fibre and practically ignoring the needs of game animals. As of late,this isn't setting too well with the hunters and fishermen in this province and the big forestry companies and the government of the day had better revise their game plan because the cat is out of the bag and the general population will no longer stand for this type of short sighted management philosophy. With QDMA getting organized in the province,I look forward to this grass roots group of land owners putting pressure on the powers that be to move forward and come up with a plan that includes something for the game animals as well as strictly fibre enhancement.Things are so bad right now that in my view,we can only move forward towards better management policies because there is nowhere to go but up and the status quo is certainly not acceptable to outdoorsmen as well as the general public.
The one thing sportsmen can do to help the deer herd out is to target the coyotes during the off season.It's too bad the fur market is so depressed because our trappers here in New Brunswick would put a hurt on these deer killers in a hurry if the money was there to make it economically feasible to pursue them. Nova Scotia has a modest bounty on them and from what I hear,many trappers and hunters are really going after coyotes hard this year. The DNR in New Brunswick would do well to borrow a page from NS DNR's management policies regarding coyotes and implement some kind of bounty on these dirty buggers. Even contests for numbers and size of coyotes can make a difference and I see that this year there are different contests being sponsored in various areas of the province. This will help to keep the numbers down and at least prevent some deer from being taken down by our coyote/wolf packs.

As I am sitting here at my computer writing this months blog,I glanced out the window after some movement caught my eye and there was a nice pilated woodpecker hammering on one of the large trees in my front yard. I've always admired these large colorful birds with their jungle like call but they haven't always been as plentiful as they are right now. The spraying of DDT back in the 50's and 60's nearly wiped them out.How rare were these birds back then? Well,I had experienced woodsmen tell me they didn't exist and that I was seeing things! That's how rare these birds once were. Since those days,these beautiful birds have increased their numbers to the point where they are regularly seen in any old growth forests left,where they forage for insects.Here are a couple of photos I snapped while my visitor posed for me. 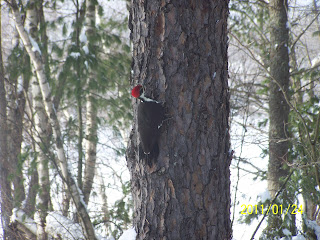 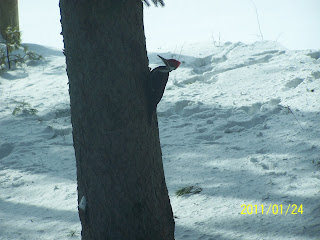 This month I have include a couple of souvenir items from my collection of vintage stuff I have collected over the years as well as another TV or stand lamp.This lamp was probably made during the "sixties" in a crafts class or by some industrious person who made crafts such as this in their spare time. This lamp was made as a fireplace with actual stones used in the construction,as well as a hand crafted shade made from pieces of wood lathe. 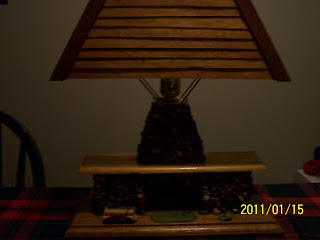 The next photo shows two souvenir items I picked up recently.Although they were considered as tacky items in their day,nowadays people collect this kind of thing just because it is kind of tacky!Go figure.Regardless of motivation,there is a growing segment of the population that likes collecting this stuff. 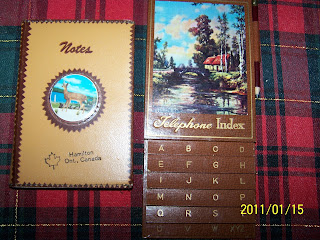 I will end this months blog with a reminder to outdoor folks interested in a day or week in beautiful New Brunswick to give me a call or drop me an e-mail and Ken and I will arrange an adventure to our part of the province on Grand Lake that you won't soon forget! Until next time,Happy Trails to you,Until we meet again!
at January 23, 2011 No comments: