The weather has been nice here at home on Salmon River after the deluge our province received a few weeks ago. This huge downpour raised the Miramichi River in the Blackville area over twenty feet. No, that isn't a typo error. That is a LOT of water! Salmon River only raised twelve feet so I guess we were lucky in that regard. Many salmon fishermen were thinking the worst but this big raise actually helped the salmon in their migration to their spawning grounds. It also helped the salmon fishermen in their quest to hook one of these great gamefish if you were fishing in the right location. Because of the ideal water conditions, most of the salmon were pushing right on through to the upper reaches of their habitat. The MSW Miramichi and the Cains River both experienced good fishing in their middle and upper sections, especially the Miramichi. I started off fishing in the Doaktown area of the Miramichi but quickly switched over to the Cains River near the 123 highway bridge. These photos show an upstream and downstream view of one of my favorite pools in that stretch of the river. The first one shows the downstream view of the pool. 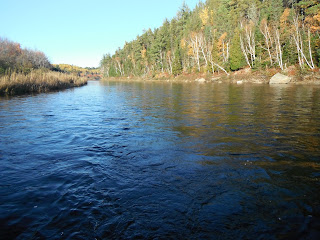 The next photo shows the view looking back upstream. 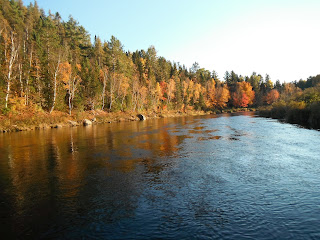 I managed to land a grilse and rolled a couple of others. I also got some bumps from more fussy fish that I didn't hook. That's typical salmon fishing for you. One thing I like about fishing the Cains River in the fall is the fact that one invariable hooks some nice brook trout. I think I landed a half dozen in the ten to sixteen inch range. Unfortunately, I was fishing alone and didn't get any photos but the grilse I caught looked something like this one I landed a few years ago on the Cains. 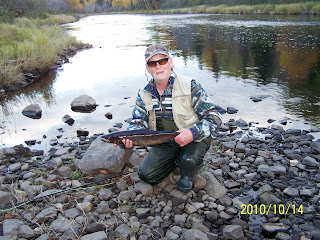 One group of fishermen that were fishing down river about eight miles said they had very good luck. Their group landed several fish including some large salmon in the twenty pound range. Fishermen who were fishing in the Boistown area and on up above the village in the Juniper area also experienced some very good fishing. This is all great news for the salmon and the fishermen who pursue this great gamefish. After the terrible season last year, many folks breathed a sigh of relief when the counters reported very good numbers of fish returning. It turned into a year that was more in line with multi year averages and that sure put a smile on a lot of faces, including mine.

Reports from the lower MSW Miramichi are saying the striper fishing has been very good the last few weeks and the retention period saw many anglers fishing from shore, wharves and boats with good success. A quota of one fish per day and one in possession has been allotted to fishermen who wish to keep their catch as long as it falls within the slot size which is between 50 and 65 cm. total length. Stripers are very tasty when filleted and baked or pan fried. Most fishermen advise removing the lateral line of red meat to get rid of the strong fishy taste. Choice of lures include light colored swim baits as well as cut bait. Be advised to use non-offset circle hooks when using bait. This photo shows Ken with a keeper he caught during the spring retention period. 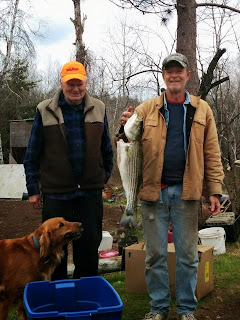 The grouse and woodcock hunting has been pretty good this fall and I must say I was pleasantly surprised considering the cold, late spring we had. Although most hunters prefer birch partridge over their close relative the spruce partridge, both types are quite tasty but the dark meat of the spruce variety is a little gamey if not prepared properly. Soaking overnight in salt water will help remove some of the strong flavor. This photo shows a young chick that shows absolutely no fear of humans. 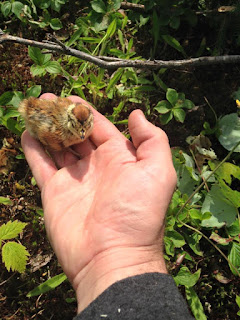 This little guy was safely returned to his mamma after the photo was taken. No harm done. Mother hen grouse can get pretty aggressive when you get around their chicks and will sometimes fly up in your face to move you away. This next photo shows some birds my buddy Shawn S. got last week. 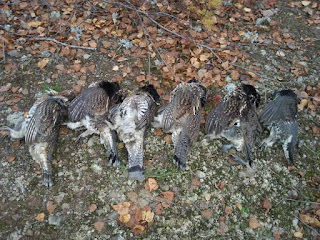 I want to report a flock of wild turkeys in a field on the # 10 highway this evening [ 10/31 ]. I estimated there to be between fifty and sixty birds in this flock with several large toms in the mix. I didn't get a photo but was able to watch them from the highway very easily. Quite an impressive site!

The duck hunt up our way was pretty much a wash out because of the flood from the huge rainstorm we had at that time. Jamie and Dallas did make a day of it by travelling to the lower end of the Grand Lake system and managed to get a few ducks before the water started to rise and they had to pack it up. There has been a few northern Black ducks around and the locals have been taking a few.

The fall black bear hunt is coming to an end soon and there has been a few nice ones taken from orchards and from bait stations. We usually have bear tags on hand during the deer hunt while the bear season overlaps because bears can wreak havoc at stands set up for deer when using bait. A fall bear is such a glutton it will eat all the deer bait you can lug and they will keep deer away from your stand as long as they are around. Jamie had one bear that was being quite a nuisance at one of his deer stands so he decided to take him one night when he came in. This was a young bear but he had a nice blaze mark on his chest. Jamie, Dallas and the rest of the boys all like bear meat, especially a young fall bear, They all pitched in and they had it skinned and cut in no time. Here is a photo of that bear. 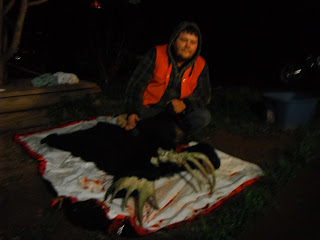 As it stands, our bear numbers are high and stable at the moment but a two bear season is sure to change all that in the near future. Not only will we see a sharp reduction in overall numbers but the size and quality of animals taken will be less. I have said from the onset of this two bear season that it should have been divided into a spring and fall season. This would have encouraged more fall hunting and distribute the pressure more evenly over the spring and fall black bear hunts. Wildlife management in today's fast changing world is as much art as it is science. Managers must be able to see the implications of new laws and skewed bag limits before too much damage is done. The goal must always be to have game numbers suitable for the available habitat of each species. This may sound like an easy thing to do but in my experience it can be anything but. Take white-tailed deer for example.

The white-tailed deer herd in our area is suffering. I refuse to sugar coat the predicament that our deer herd finds itself in. Our hunting grounds and the areas south of us experienced a thirty percent loss of their deer herd over the last two seasons. A lot of this can be attributed to bad weather but the bottom line is if they have food, they will survive....usually. Cutting down on coyote numbers certainly helps. Most of the deer in our area are holding their own in and around the villages of Chipman and Minto but the Big Woods that surround us are predominately softwood and better moose habitat now than deer. Don't get me wrong. There are still pockets of deer with some good bucks in the mix but they are concentrated in the best available habitat and that is the various drainage's of rivers and streams that feed the Grand Lake system.

Just so my readers know it's not all doom and gloom when it comes to the deer hunt in New Brunswick, I have some photos of bucks bagged in the bow season and the early part of gun season. This first photo shows one of the nicer bucks taken with a bow this year. 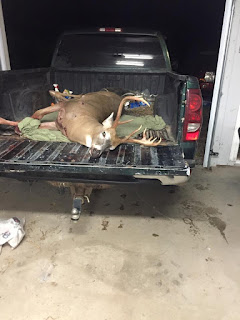 Randy-Michael also took a nice little buck this year with his bow. Randy knows I love deer meat and I told him this buck was going to be mighty tasty. I think this is Randy's second buck with a bow. 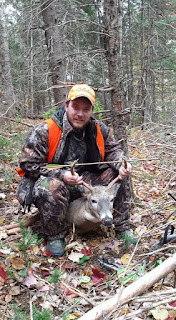 This next photo is of a nice buck taken on the first day of this years gun season by Sonia G. This is a great buck and the photo does the story justice. I see more and more successful lady hunters over the past several years and it's great to see women enjoying this sport. 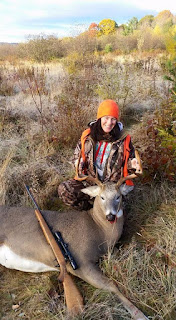 This next photo was a big hit on social media and it says a lot about the hunting tradition in New Brunswick. This lady hunter was hunting in the Riley Brook area with her boyfriend when she tagged a nice eight point buck. Both hunters are seventy years of age. Congratulations 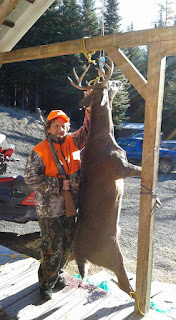 to both hunters and a great story. Note the open sights on the rifle. I killed my first deer in Riley Brook many years ago before it was heavily logged and it was beautiful deer country. Big hardwood ridges sloping down to dense cedar swails where bucks would hide out during daylight hours before running the ridges all night. This next photo shows a hunter with a nice buck taken during the first few days of the season. He also killed a coyote that was trailing his buck. Good job! 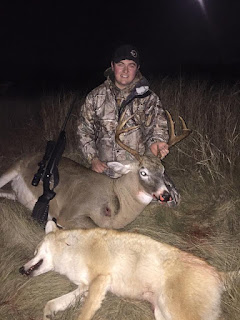 These photos are of resident  hunters and the deer taken were from various spots around the province. These photos make no attempt on my part to promote or favor any particular part of New Brunswick for hunting deer. I include these photos as an overview of the deer season and for the interest of my readers. As you can tell from my posts,  New Brunswick  has an abundance of fish and game to pursue.

This is Dale Bauer saying" Happy Trails to You.....Until we Meet Again!"