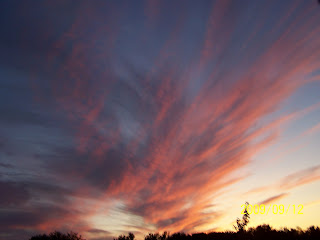 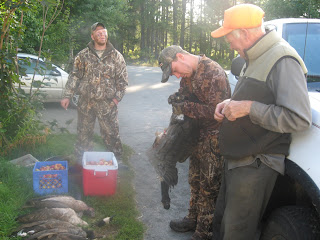 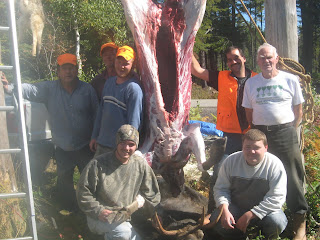 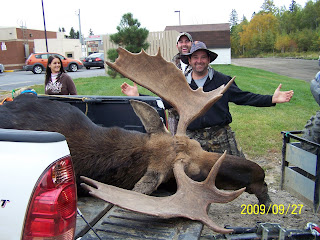 New Brunswick held its annual moose hunt last week and by all accounts, it was a success


There were 2,436 moose killed this year and that represents an eight per cent increase over last year. Hunter success rate was also up,at sixty-nine per cent,overall. In my mind,these numbers represent a well-managed moose herd that is increasing in size.If you travel New Brunswicks forests any at all,you will surely have an encounter with one of these giants of the North Woods! The photo shown is of a last minute bull taken fifteen minutes from the village of Doaktown. These guys called the cow out in the last half-hour of the three day season and the bull reluctantly followed her and thats when he was downed.Talk about a happy bunch of boys! Now the bull in this photo is a trophy animal in anyones estimation,but there were dozens of moose as big or bigger taken this year.One of the biggest I heard of was a thirty-three point monster taken outside of Oromocto. Our group only managed to get one tag drawn,so Randy-Micheal,his father and Dallas were the ones to actually go on the trip,but when they needed a hand we would all pitch in as needed.And they did need a hand! The area they chose to hunt had several moose in the surrounding bogs and choppings and for the first day and a half,they listened to a cow call,especially at night.The moose actually started calling the week before the season started. I stepped outside of the house one night and I could hear one cow bawling steadily and one or two more off on the distance answering.The problem Randy and friends had was they didn't have an experienced caller with them.There was lots of moose in the area,they just coulden't get one out in the open.Enter, Kenny to the rescue! Kenny is a very good caller,having many years of moose hunting experience in Ontario,as well as here in New Brunswick with his father,Wes,and the rest of his uncles.Kenny likes to call just with his hands and his cow call is a long,high-pitched whine.His bull grunts are also rather high-pitched,short barks.Kenny doesn't like to call too loudlybecause he likes to go to the moose.Any how,Kenny took a drive out to their area and at the first place he set up to call,he brought out a nice young bull at one hundred yards and coming to them. Randy-Micheal was ready and waiting and up to the task.This photo shows the boys with the moose after getting it out of the bush and on the pole.These boys know how to handle big-game and they make short work of the task at hand.Congratulations Randy on your first moose and kudos to Kenny for bringing him to the gun. Randy is like most local moose hunters in the fact that they just want to get a moose,any moose in such a short season. That young bull will be the very best of eating!Thats for sure! The boys also had a good morning hunting geese in the fields during the early season.They found some birds and set up the next morning and Jamie Dallas and Randy Micheal got eleven honkers by lunch time.The photo shows Dallas and Randy showing old Wes their take for the morning. The geese and ducks are both down slightly this year,but if you did your home-work,there were birds to be taken.Scouting and getting access are the keys to good hunting for honkers in the fields. We are on the eve of the first day of duck season and all the Hargrove clan has gathered for the annual hunt.I'll be shooting with Dallas and Jamie and Whiskey dog,the golden retriever. We will shoot in the morning and then have a big lunch and wait for the night hunt.Then the big supper,along with all the stories and tall-tales and the laughter.Thats what it's really all about.The comraderie,the friendship,the good times.And it's there when we all get together,doing something we all love to do,travelling the woods and waters of the Grand Lake area of beautiful New Brunswick. This time of the year, the trees are ablaze with all the fall colors and some of the sunsets are spectacular,like the photo of the peculiar cloud formation taken from my shore on Salmon River. We finally got the rain all of the salmon fishermen have been waiting for.This past month has been quite dry and many of the fish were waiting for a raise of water so they could move up river.The water is up about eighteen inches and there are reports of large fish moning in the Miramichi and there has been some movement on the Cains River and the word is the annual fall runs of salmon have begun.There is some fantastic fishing to be had during this late season and its one of the prettiest times of the year to be on the water. Although the trout season is done,some large brook trout are caught while fishing for salmon and they must be released but they are still fun to catch! So if any of you sports would like to take a trip to the woods or waters of our beautiful area,just shoot me an e-mail or give me a call and we'll get out there and do it!
at September 30, 2009 No comments: