The weather has been kind to us here at home on Salmon River lately and water levels have finally receded to normal summer levels, although about a month late. This has made for some fantastic pickerel fishing with pros and amateurs alike hooking and landing dozens of trophy sized pickerel on every outing! A cold front moved in towards the end of this month and this slowed things down a bit but if you had the right bait you still had multiple hook-ups. This photo shows Ken with one of eighteen pickerel he landed during a two hour outing we had a few days ago. 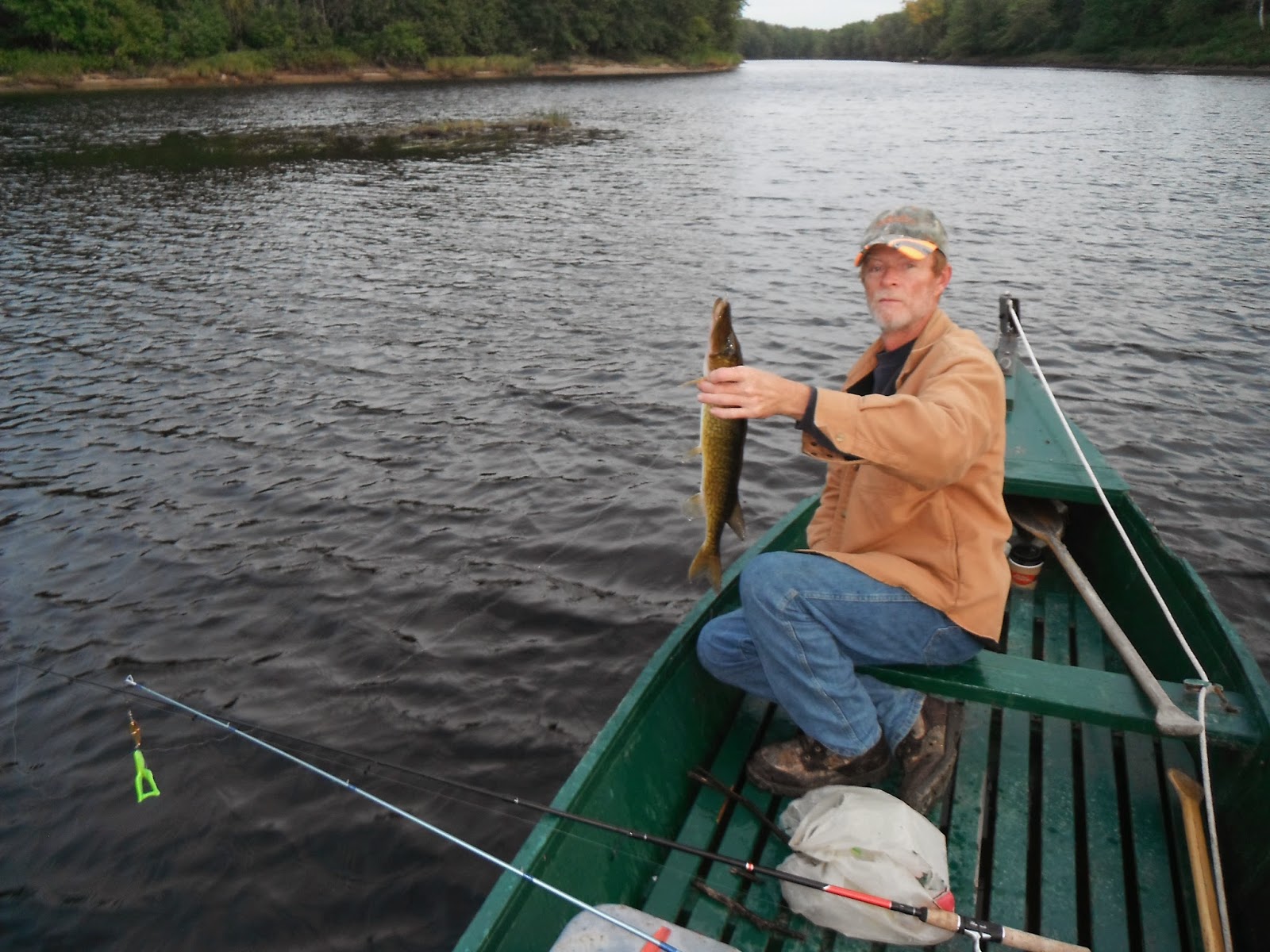 We also had a sighting of a nice salmon making it's way up river past us. Although it didn't jump, it was moving a lot of water in it's wake and Ken and I estimated it's weight at twenty lbs. or more. Nice to see because we haven't been seeing too many the last few years. Here is a short video clip of Kenny pulling a nice pickerel out of the weeds.We kept one good sized one for a feed and if you can figure out how to get rid of the Y-bones the fillets are delicious when cooked up. One pickerel can yield enough meat for two people if you are having a shore lunch with potatoes and beans. Ken and I are both big eaters so it's best to have something to go with the fillets but one pickerel will give you a dinner plate full of fillets if you prefer to eat just the fish. I like to fry them in olive oil with a coating of batter. Talk about good! 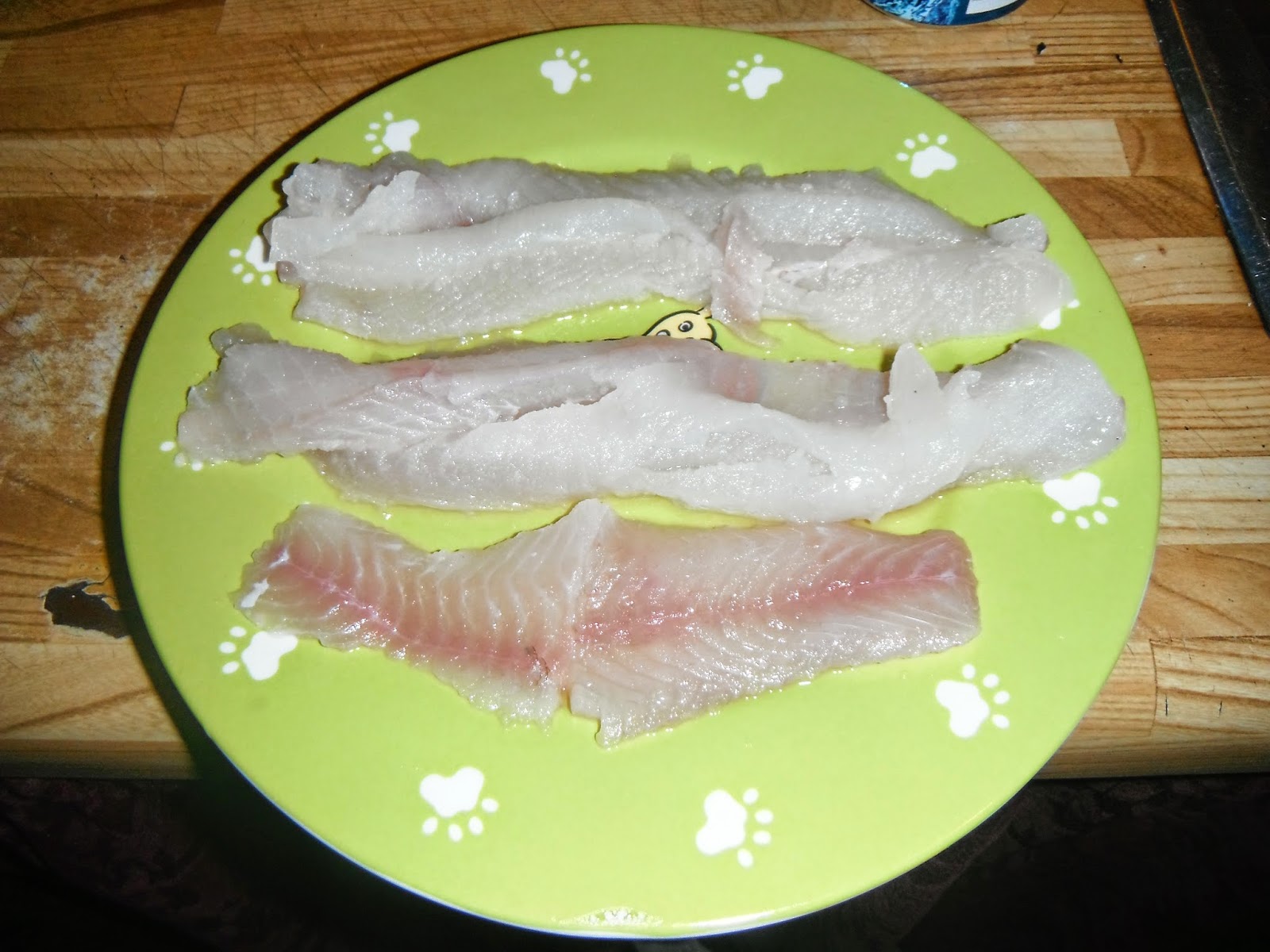 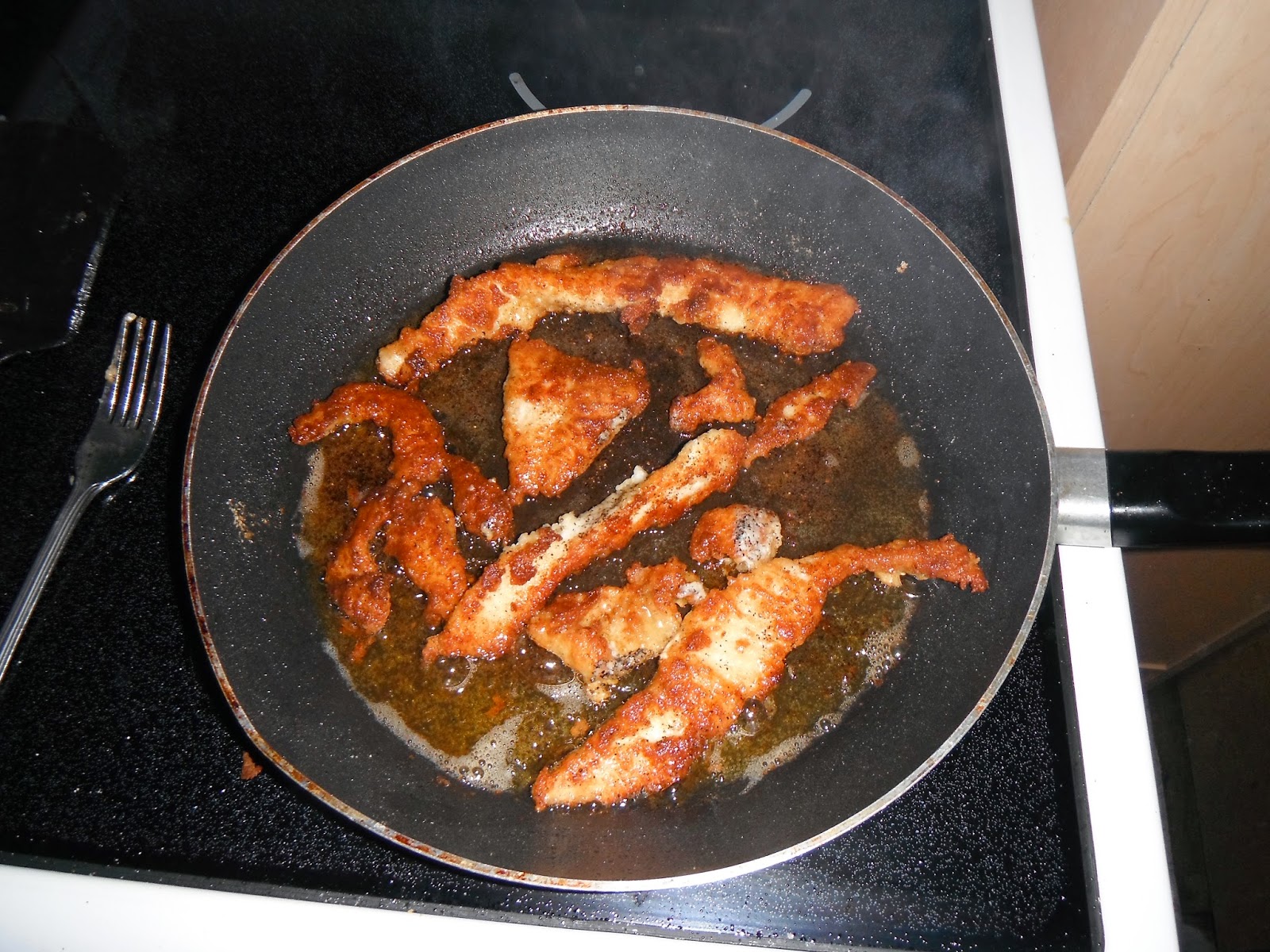 Salmon season is slowly winding down and the consensus is this year was one of the worst on record for returns of Atlantic salmon to our rivers. I really feel sorry for the outfitters on the Miramichi river because the spring season was pretty much a blowout and then having to deal with the low returns this summer. There has been a glimmer of hope recently with a run of fresh fish entering the system the last couple of weeks. Water temperatures have been very good but we need a raise of water to really improve the fishing conditions on our salmon rivers. With some rain in the forecast for next week, I hope to get on the Cains river to finish off the season. The fall colors are spectacular on the Cains and if any readers get the opportunity to wet a line they should take full advantage because even if the fish aren't co-operating, the scenery is spectacular and you will get plenty of "Kodak" moments.
New Brunswick's annual moose season has just finished and under the new five day season, a record 3,690 moose were tagged. This slight increase was expected and most hunters said it was a much more relaxed hunt with the extra days this year. I have always found that a three day hunt could be quite stressful if something like poor weather or crowding occurred during the shorter season. Our station in Chipman registered 14 moose on the first day and 70 moose overall during the five day season. The three top bulls were estimated at 955 lbs. each. The best bull had 21 pts. and was taken in zone 18.The other two bulls had 14 and 11 pts. respectively. The following photo is of a great old bull that I chased for two seasons but failed to connect on. This old bull had a footprint that was unmistakable. It seemed to be as big as a pie plate. This bull was starting to go the other way so I was happy to see some local boys harvest this nice trophy. 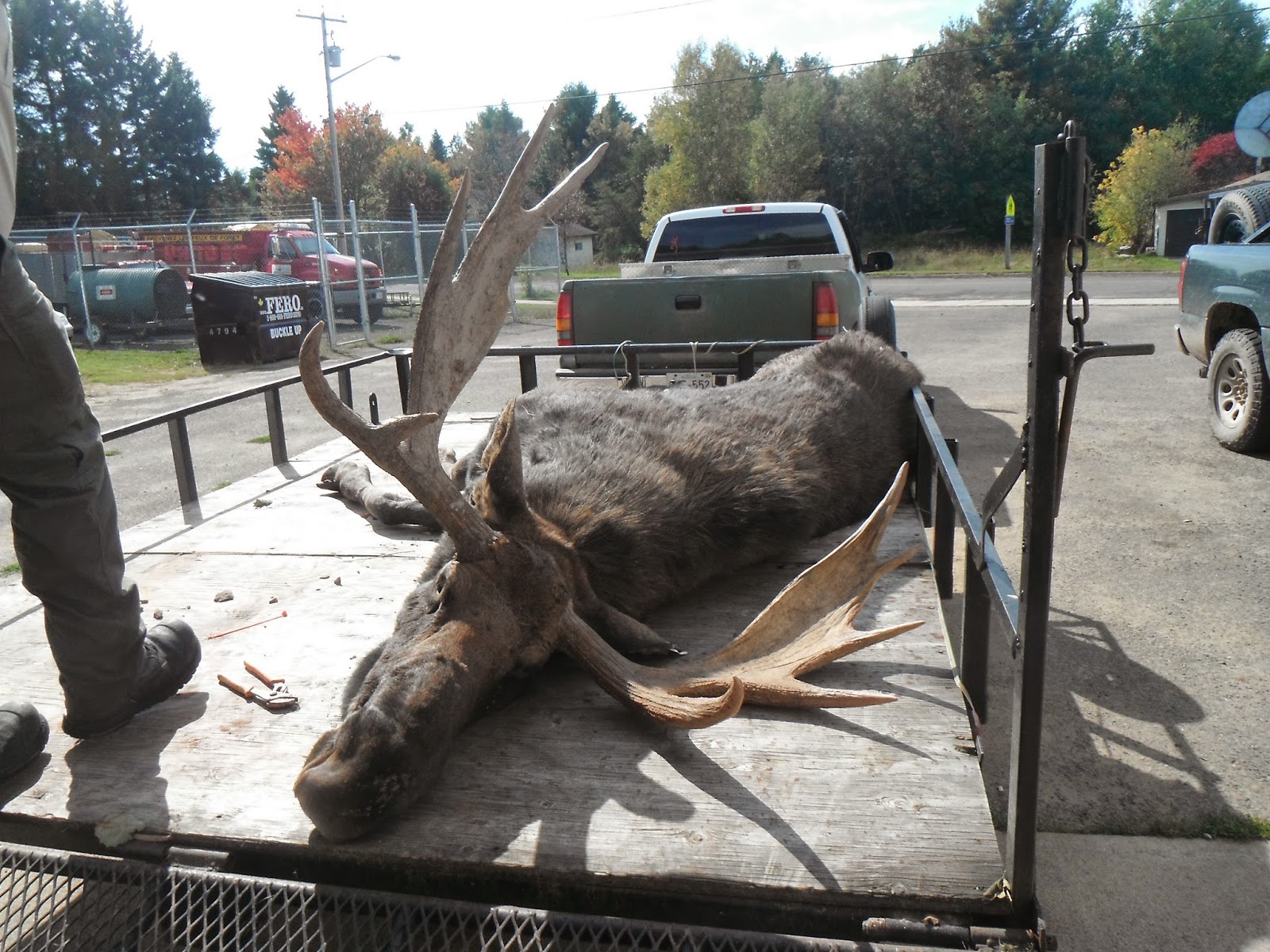 The following photos show a variety of bulls taken from different parts of the province. 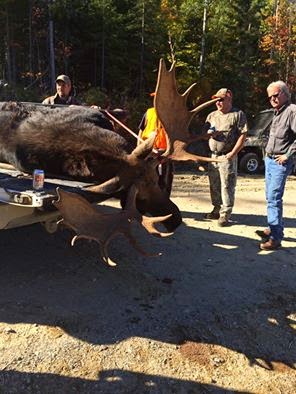 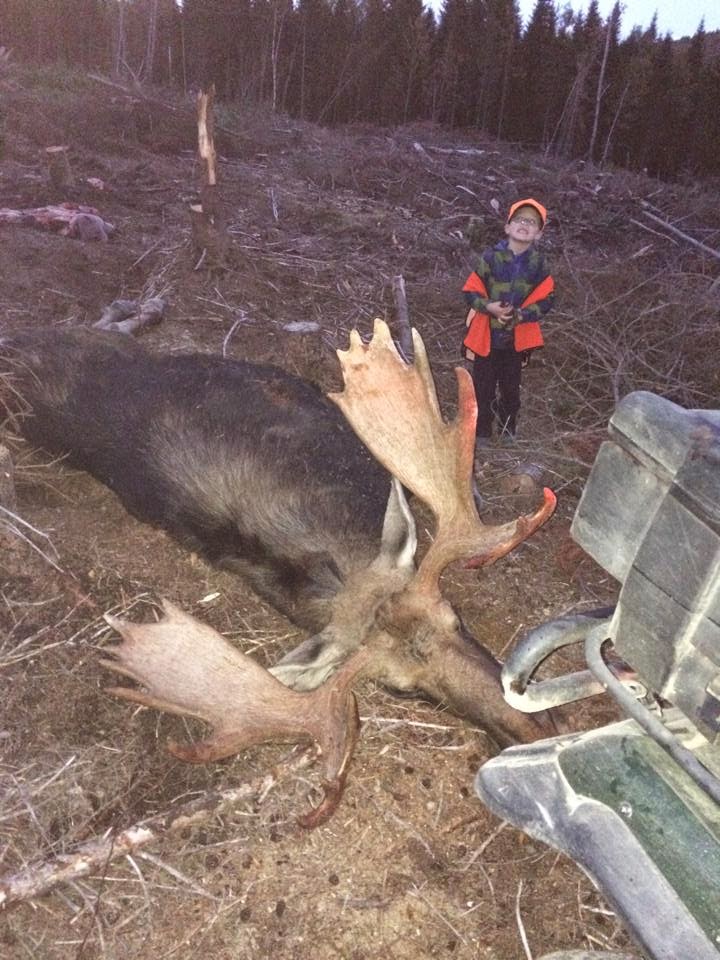 This 18 pt. bull dressed around 875 lbs. and was taken near Gordonvale. 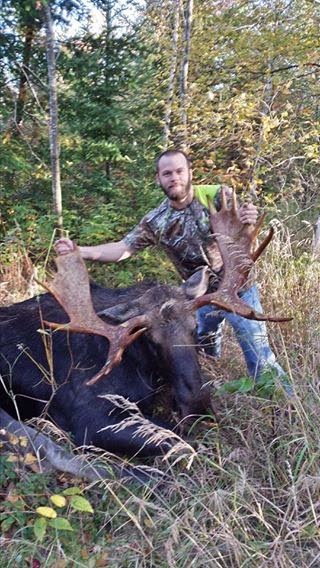 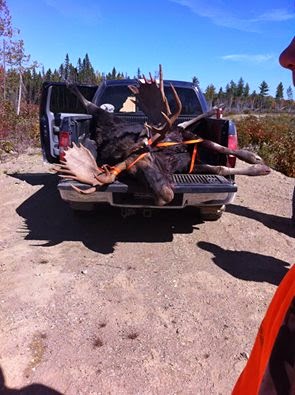 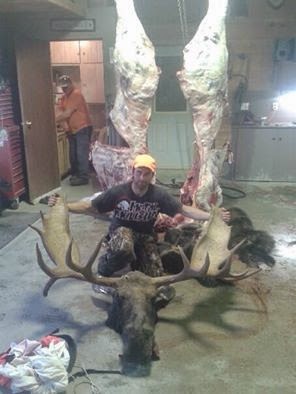 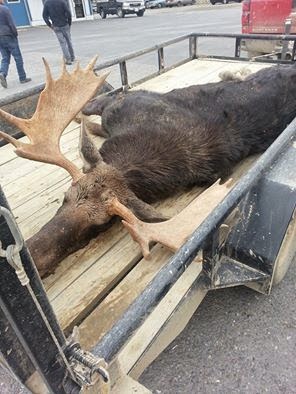 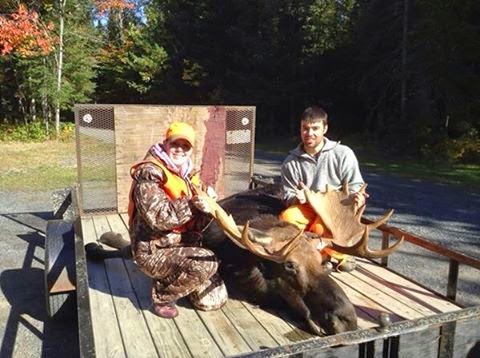 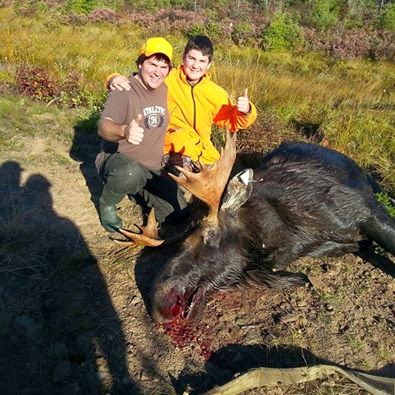 Local hunter Shawn S. and son with his zone 13 moose 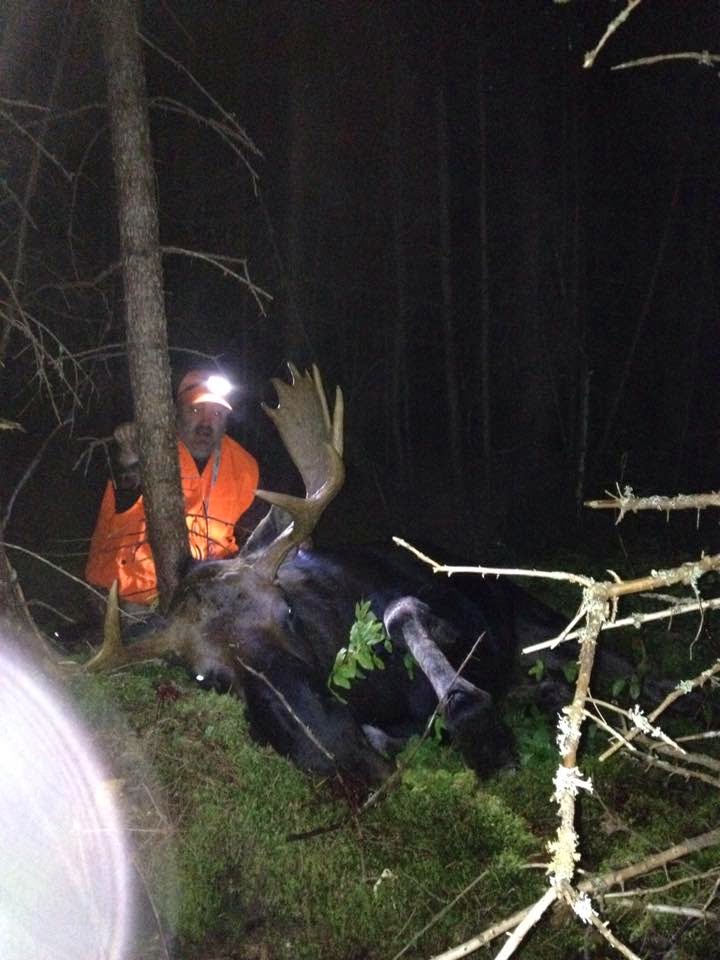 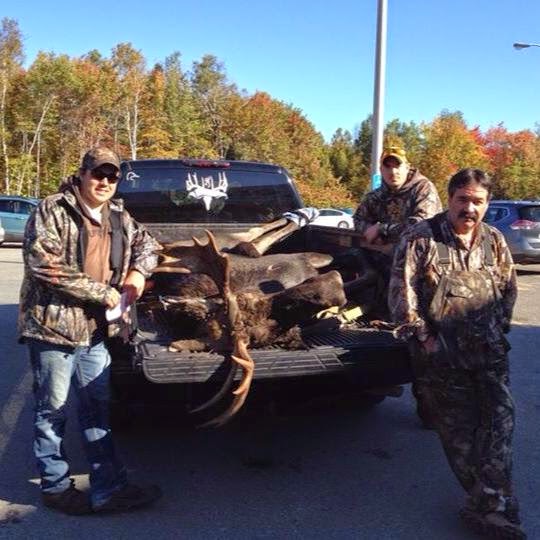 Gary L. and his son Tim with another nice bull taken this year. 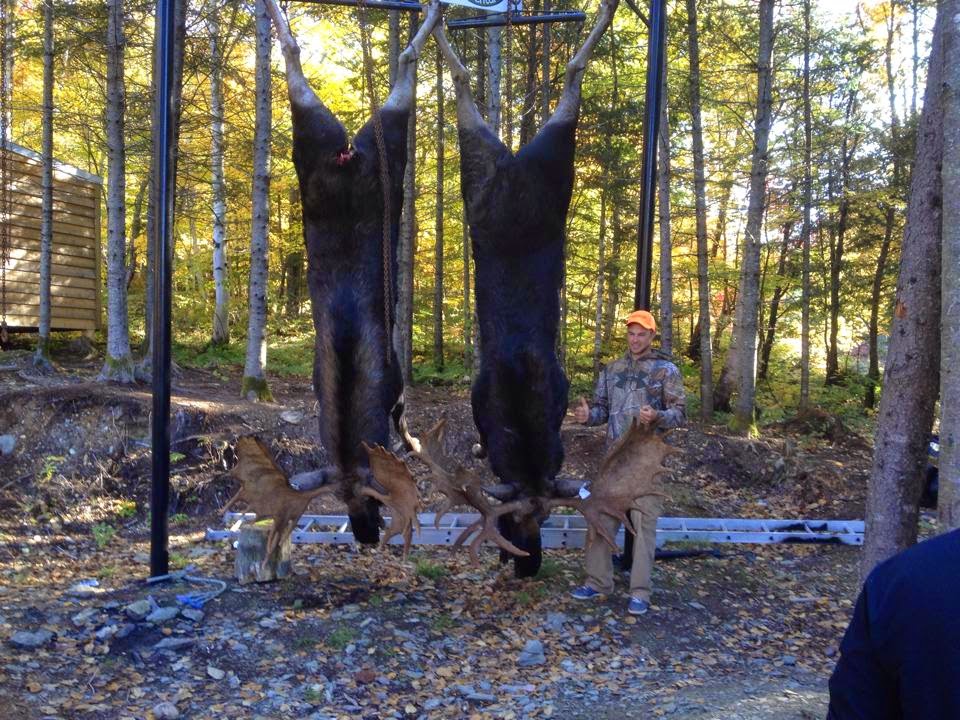 Two trophy bulls taken this year. It doesn't get much better than that! 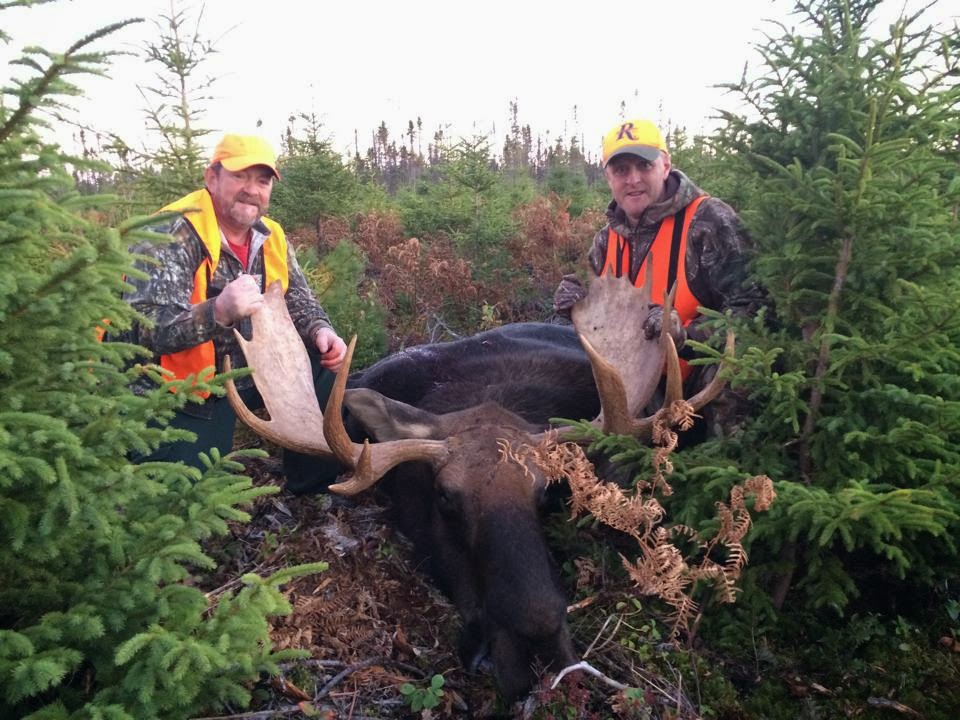 Nice bull taken in zone 25 in the southern part of the province. 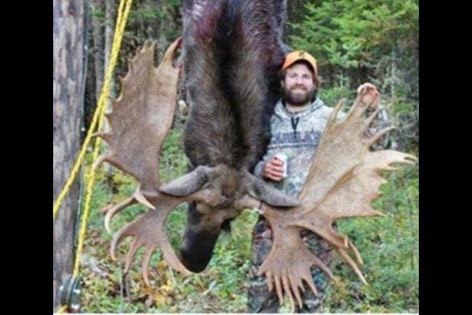 And last but certainly not the least was this tremendous bull taken in the northern half of the province. This bull has 40 pts. and a 67 inch spread. Many think this bull will be the new record for moose in N.B. and I have to agree. What a trophy!
As you can see from these photos there is no shortage of trophy bull moose here at home in New Brunswick. Good management practices have led us to this point and lets just pray that our new Liberal government has the wisdom to carry on this tradition during their term. While on the subject, I want to congratulate David Coon on being elected to the Legislature under the Green banner in what has proven to be a historic vote here in New Brunswick. His voice should help to strike a balance with the strong industrial lobby that exists in New Brunswick.
Readers should remember that New Brunswick isn't ALL about hunting and the harvest. We have many good photo opportunities during any foray into our game rich province. I want to include a couple of great photos taken by local amateur shutterbugs. The first photo is a great shot of a loon taken at Douglas Harbour on Grand Lake. . 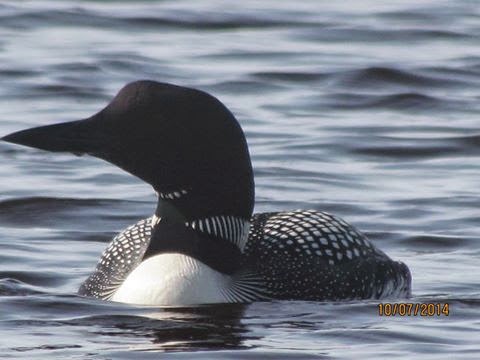 The next photo shows a group of turtles sunning on a log in the Coal Creek stream. 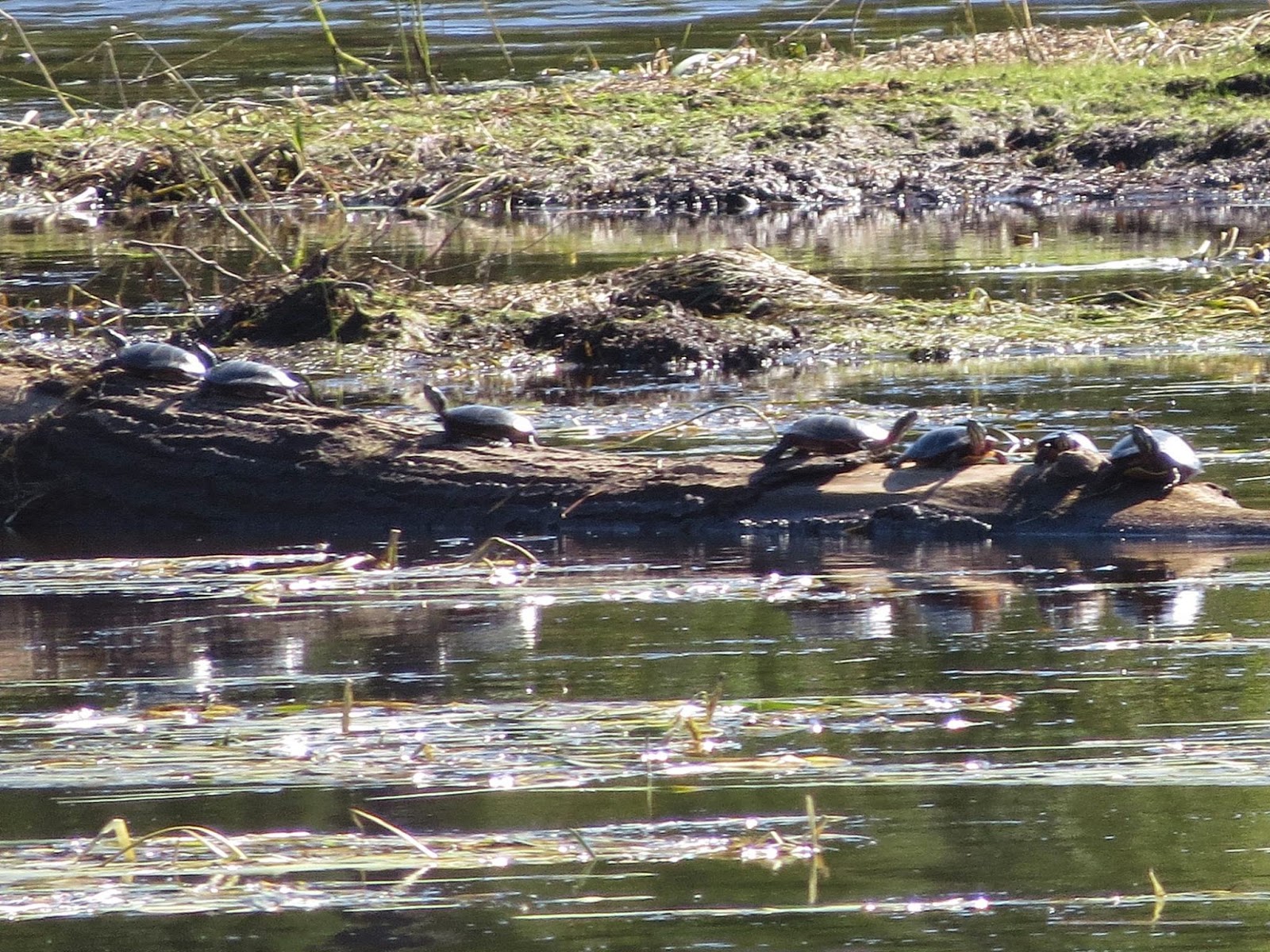 Visitors can expect many photo opportunities such as these when staying with us during your visit to the Grand Lake area.
As I mentioned in my last post, I lost my good friend and fellow guide Alan Davidson this past summer and it will be hard for me to enjoy my hunts this fall without him. We had so many good times through the years. I know I'll miss his great lunches he would cook up at dinner time during our hunting and fishing trips. But I know Alan would want me to make the best of it so that's just what I'm going to do. I'll be out there Ally and I'll try to get a big buck for you but I doubt I'll be able to match any of the great bucks he took during his lifetime. Here is a short video clip of Alan cow calling on one of our last hunts together.
With the main hunting season about to start I would encourage any sport looking for a good hunt here in the Grand Lake area to contact me for more information. We aim to please and you will get 110% effort on the part of your hosts and guides.
Until then, this is Dale Bauer saying '' Happy Trails to You.....Until we Meet Again ''
at September 30, 2014 No comments: