Spring has finally arrived in our part of the country and most folks around here are very happy to see the snow pack starting to melt. We had quite a bit of snow this year around Chipman and to the north and east of our location but other areas to the south and west had a very good winter,with less than normal snowfall. I took a drive to the southern end of Grand Lake this past week-end and I was surprised at how much less snow fell in that short distance from Chipman to Scotchtown. The fields are pretty much bare and the white-tails are taking full advantage of the new shoots that are popping out already. I counted roughly two hundred deer in the fields between Douglas Harbour and Indian Point. It was a pretty impressive site and it gave me a "feel good" moment to see that many deer that survived another New Brunswick winter. It never ceases to amaze me how much of a difference exists between our Crown lands and the areas of private ground. The southern end of Grand Lake is for the most part private ground consisting of large farms and woodlots and the hunting pressure is kept to a minimum.That,coupled with good forest management,seems to be the key to allowing the deer herd to prosper in that area.I know they have their fair share of coy-wolves in that area so that can't be the factor that tips the scale in favor of the deer.If our government and the boys from the DNR would pick up the gauntlet and run with it,we could see an increase in our deer numbers on crown land also. The latest word from the government is that the large corporate woods operators will be given a cut of 53% of the existing DWA's and protected areas in 2012. This has outraged sportsmen and conservationists alike and has resulted in a huge backlash and letter writing frenzy in an effort to stymie this crass piece of work. The biggest problem I have with this proposed cut is the fact that it is slated to occur for the simple reason that government has allowed the big corporations to over cut for the last thirty years.This should never have been allowed and it was only pure greed that allowed this to happen. OUR crown lands were to be managed to allow for a sustainable cut in perpetuity.The government and big business has failed in that mandate and the deer as well as woods workers AND private woodlot owners are suffering as a result.It will be very interesting to see how this plays out in the near future.
The ice fishing season has come to a close and most locals finished off the season by attending the Paul Gallant Memorial Pickerel Tournament. The tourney was a great success with over one hundred participants fishing French Lake and Indian Lake. Maquapit Lake resident Ralph Atyeo was the overall winner with his two fish as well as winning the lunker prize with a fish measuring twenty-four and five-eighths inches. The second and third place winners were tied at forty-seven inches for their two fish and Bailey Dorion won the toss for second place.Raymond Thibodou won third place by default. A great time was had by all with many prizes and trophy's being provided by the many sponsors of this yearly event.
The smaller streams and rivers are slowly starting to open up and we are looking forward to the April 15th opener of the regular fishing season. As usual,we will be fishing for black salmon on the main Southwest Miramichi on the opener,if the ice has run out by then. Here at home on Salmon River the ice has started to move above Gaspereau Forks but is still holding solid below this point. The following photo shows a spot below McLeod's Pond just starting to open up. 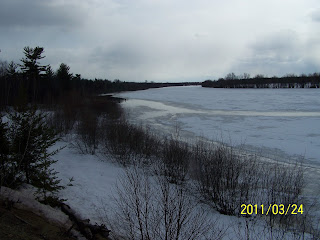 We are expecting to have more water this year than we had last year for the opener because of the heavier snow pack but you never know what Mother Nature will throw at you. Many sports and guides like to see lots of water for spring salmon fishing but I am one who rather likes low water conditions, like we had last year. It makes it harder to navigate the river but the fish are concentrated in the deeper holes and it makes it a little easier to find fish in this type of water.I love being on the Miramichi at this time of the year because it's usually a time to get together with family and friends and get the season off to a good start. I will be fishing with Donna Aguillon again this year and if we even do half as good as we did last year,it will be great fishing! Good friend and fellow guide Allen Davidson will also be fishing with us,as well as several of our friends and guides from the Chipman and Doaktown areas. Last year Donna hooked a huge salmon,the largest I have ever seen and after playing it for about forty-five minutes or so,the hook fell out of its mouth.I estimated that fish to be five feet long and forty lbs.last year and in retrospect,I have to say that I stand by that estimate. The funny thing about that fish was we had been fishing the run for a while without any hits and Donna said she wanted to change flies.I told her to go ahead and pick one out so she tied on a marabou pattern and she didn't make two casts when she hooked that monster! I have become a real fan of the marabou patterns the last couple of years,having caught good numbers of salmon during the spring and fall seasons. They are especially deadly on large salmon.I am not the only one who has taken a shine to these great flies.Derek Munn,head guide for the Ledges Inn,seems to like them too according to the posts he made in his blog last year.The photo below shows a few Marabou patterns commonly used on the Miramichi. 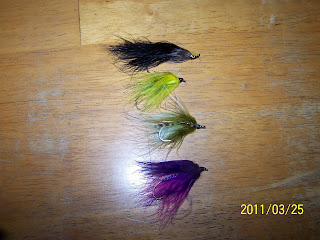 They say size DOES matter and after last spring I firmly believe that the size of your fly must match the height and clarity of the water conditions if a fisherman is to have any success fishing for Atlantic salmon.With the low water conditions and clear water we had last spring,fishing the smaller marabou patterns was the key to a successful day on the water.A good guide will recognize what the water conditions are like and this will govern his choice of flies. Another pattern that is earning a following is the tandem rabbit strip flies.I haven't used any of these flies yet but I will definitely be trying some this spring and fall.The photo below shows a couple of this relatively new pattern and just the look of them spells fish. 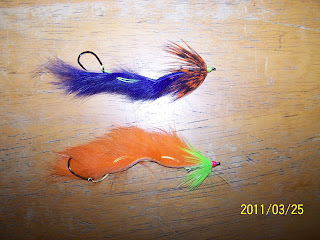 I expect that both the marabou and rabbit strip patterns will do well on the sea-trout on the Miramich and the Cains River so be sure to include a few of these flies in your arsenal when you hit the water this year.
I have been picking up some very nice art work this winter during my travels and the following photo shows a painting done on a slab of wood.This has been a popular way to produce art work for many years and this one is twenty years old and looks as if it may have come from out west because of the subject matter.It is signed and dated Angie "91". 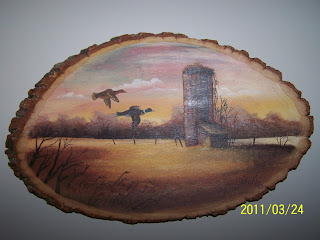 The next painting shown is done in a similar fashion but this one dates back to the late fifties or the early sixties.This is just my estimation because it isn't dated but it is signed by the artist. I really like this painting of a fawn deer and the artist did a great job in portraying how fragile looking the small deer is. 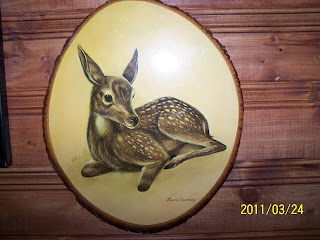 The last item shown this month is yet another lamp.This one is modelled after a nice white-tail buck and is similar to another one I have except this one is more of an end table lamp because of the design,having a rather large shade. 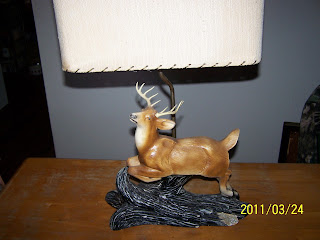 I hope the readers of my blog enjoy seeing these vintage items as much as I enjoy finding them,so don't be afraid to leave a comment if the mood strikes you.Be sure to check out next months blog as I will be updating the spring salmon fishing and preparing for the spring bear season,which is just around the corner.We had some huge bruins on our baits last year and we got some of them on the trail cams,so be sure to drop in again. If any sports would like a day on the water or a week in the bush here in the beautiful Grand Lake area,just give me a shout and Ken and I will fix you right up. This is Dale Bauer signing off for now and wishing you Happy Trails-Until we meet again!
at March 25, 2011 No comments: