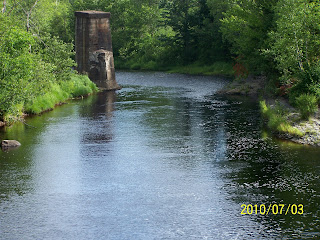 This photo is of the Trestle Pool on the Newcastle Stream.This was my favorite pool as a youngster and I caught many nice brook trout here as I was learning to fly fish. We're now into the time of year when the trout and salmon are holing up in cold water brooks and springs trying to stay comfortable until a raise in the water. the trout fishing can actually be pretty good,IF you can find them.Salmon,on the other hand, really have a hard time in hot weather and they become very hard to hook. Since the water is low and warm,we usually switch over to fishing pickerel and perch,with the odd trip for stripers.
Right now,with the conditions being as they are,the pickerel bite is smoking hot! Ken and I were out last week-end for a few hours and hooked dozens of nice pickerel up to twenty-four inches long. I lost two that I thought were larger than the two footer I landed. What I love about fishing pickerel is the lightning fast strike.It almost startles you because you aren't prepared for the viciousness of the attack they make on your lure. Many times,the fish will miss the lure,just because of how wildly he goes after it. Many times even if the fish misses the lure,if you throw it right back at him,he will attack it again and you will eventually hook up. Pickerel are also notorious for throwing or spitting the lure back at you. This is why I fish the lure that I have put together most of the time because I get good hook-ups and less thrown lures. When I do occasionally use a top water lure,its a top-prop,for sure.I make sure to rig it the same way as my Hildebrand's and I get good results with this lure in the evening when the water is still.This photo shows two lures rigged the way I like them.I fish these lures almost exclusively and have been doing so for about ten years now. 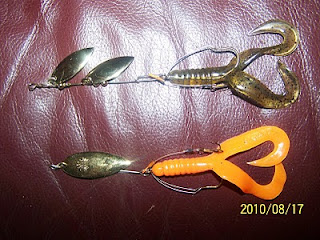 I remember my Uncle Hartley making his own pickerel lures by tying a gob of red feathers onto a red beaded,double bladed spinner with a treble hook.Many times he would add another set of treble hooks to this rig if he thought he needed more hooking power. 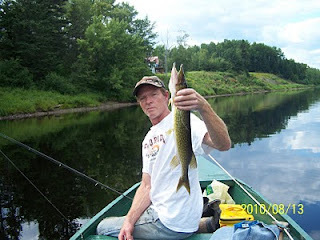 This photo shows Kenny with a nice pickerel he got trolling in deep water while we were on our way to the weed beds.Pickerel are like any other fish in that they like structure and cover and Ken caught this one that was laying beside a stone abutment with some weeds.Ken was using a small bronze Mepps and he caught a lot of fish on it.When the conditions are like they are right now,you can throw just about anything at them and they will smash it with abandon. 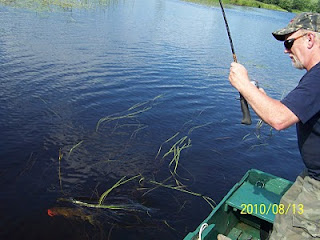 This photo shows me getting ready to land a nice pickerel. You can see the orange double-tailed leech hanging from his mouth. Ken and I always practice hook and release when fishing for pickerel in the late summer because if the fish is handled gently,he will take again the next day and the fun just goes on and on.Pickerel have very nice white meat and we will occasionally take one for old Wes,Kens dad, in the winter or early spring when their flesh is still nice and firm. The only down side to eating pickerel is they have Y bones,so there is a little tedious work taking the meat off of the bones. 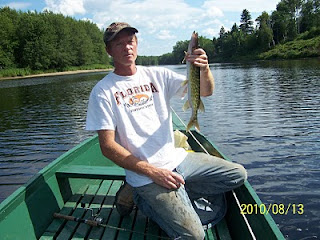 Here is  another photo of Kenny with an average sized pickerel taken from our area of Salmon River. I don't know how many fish we caught but it was a lot. That seems to happen to Ken and I quite often, for some reason! Another reason I like fishing for pickerel is the fact they are very co-operative in striking a well presented bait or lure and a successful outing is almost assured,under most conditions. 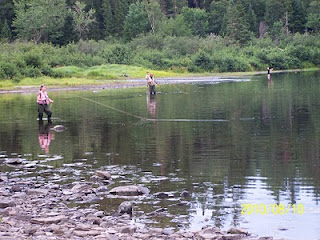 This is a photo of a young family fishing a cold water pool on the Cains River.As I said earlier in this post,the conditions are less than ideal for fishing salmon right now but there are fish to be had,with the right flies and a generous dose of patience. With the conditions being like they are,salmon fishermen would be well advised to be using long leaders and small black flies,size eight and ten and bombers with white tails. The young lady in the pink vest managed to land a nice grilse,but that was the only fish taken that evening.There were fish rolling and jumping in the pool but very few takers.The salmon fishing needs a nice raise of water to get the fish moving and bring in some new fish to the pools.When they get in their comfort zone,they will start taking again. 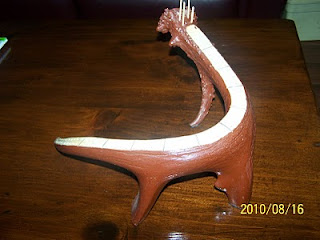 This is a photo of a crib board made from a deer antler.I just love this kind of vintage stuff and I have been collecting it over the years. All the camps we used to go to back in the day  had a crib board and a deck of cards.Many evenings were spent over these crib boards with a few drinks and lots of laughs and memories of camp life with good friends and family. Kenny is very good at making folk art type things and I always try to encourage him to make more of it whenever he gets the chance. This type of thing is getting harder and harder to find every year,so if you get the chance to get something like this,you should grab it. 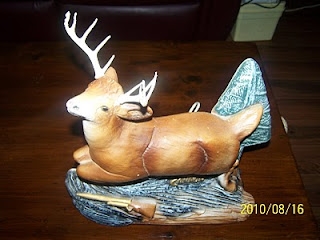 This next photo shows a nice white-tail deer T.V. lamp or table lamp. This item is circa late 50's-early 60's and is made of plaster of paris and is quite heavy. The light is behind the deer and back-lights the area where it is placed.A word of caution to my readers about older electrical items.Many times the wiring can become brittle and connections can get corroded,so make sure you do a thorough inspection of the electrical components of any older device before you use it.If you have any doubts at all,just replace the components. I will continue to show photos of vintage outdoor goods in future posts to my blog,so be sure to keep an eye out for some great old items from the sporting past.Ken and I would also like to  invite you to contact us anytime to arrange a trip to the Big Woods of central New Brunswick. Happy Trails to You!......Until we meet again!
at August 20, 2010 No comments: