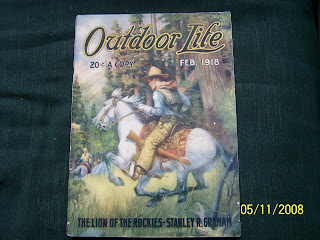 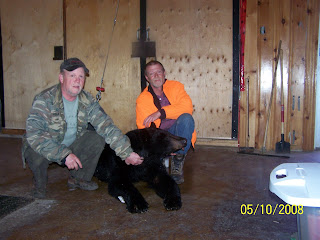 After a rather long,protracted spring with not one,but two freshets,the water has finally started to receed and things are starting to bud back to life.Ken and I,as well as the boys,have been busy placing our bear baits the past couple of weeks.We have been seeing quite a bit of action the last few days as the weather has moderated and this has put the bears on the move.Now Ken really likes to hunt bear and he usually tries to take one early before he starts guiding and as you can see from the photo,he had some pretty good luck this past week-end! I should re-phrase that because when it comes to hunting,Ken doesn't depend on luck very often.Nobody takes the number of animals and of the calibre that Kenney does with such consistancy without just being plain good in the woods.Ken loves what he does and that is what makes the difference when he gets down to business.I am proud to be associated with such an outstanding woodsman as Kenney and I hope he feels the same way about me. You just can't go wrong having Ken for a guide.That doesn't mean every hunt is a slam dunk,but you can be guaranteed he will give one hundred percent to try to make your trip a memorable one.The bear Ken took was an outstanding specimen,with a coat of pure black,fully furred and plush as a carpet.I commented to Ken that in all my years I had never seen a bear with as nice a coat as this one! The reason this bear was in such good shape was because he hadn't been out of the den for very long,so he wasn't rubbed at all and his belly fur was still nice and full. Ken's trophy will make a beautiful rug when the taxidermist finishes with it. The spring salmon fishing is starting to wind down,with most of the fish having made their way down to the lower part of the river.There was still some good fishing in the Quarryville area last week-end.Frankie T. from Minto landed five and lost several more,including at least one very large salmon.Frank caught his fish by trolling a long line and was using a Pink Lady for a fly.I just can't bring myself to use this fly,but the fish do seem to like it,especially later on in the season.I've also been getting reports of some very nice sea-trout being caught.Most have been ten to twelve inches,but there have been some three and four pounders taken also.The other photo shows an old Outdoor Life magazine from1918.I collect all kinds of outdoor related items,but these old magazines hold a place near and dear to my heart.I can remember going to the local barber shop with my father at a very young age and hoping that there would be one of the outdoor magazines available for me to look at while I waited for my turn in the chair.I know I was very young because the barber had to put a special board across the arms of the chair so he could cut my hair.It was during these sessions that my window to the outdoor world was opened and I could explore the hunting and fishing in the many different areas of the world.This started a love affair with both the outdoors and outdoor magazines that lasts to this very day.I love to read the old magazines and look at the advertising to see how things have changed and progressed,mostly for the good.It is very interesting to see how fishing has gone from taking home large stringers of fish to mostly hook and release today.It is also interesting to see how much the equipment has improved as well as the techniques used when hunting and fishing as compared to todays world.One thing that stood out to me while going through my magazines is how much things change in a relatively short period of time.Twenty years makes a huge difference in the outdoor world when you have some way to guage it by referencing these old books.I would encourage all of my readers to indulge yourselves and check out some of this great reading any time you can.It is sure to give you a new perspective on the outdoor world and the natural wonders it holds.Ken and I are looking forward to another great season this year both in the bush and on the water,so give me a call and we will get hooked up and get out there and do it!
at May 12, 2009 No comments: