This summer was a very nice one for visiting tourists and beach goers but it was, once again, a terrible summer for fishing and many outdoor activities. If memory serves me correctly, this is back to back years of low water and hot days for sportsmen in New Brunswick. Salmon outfitters, in particular, have had an awful time of it and many are struggling to stay afloat. If not for American dollars invested in many of these camps, the damage would be much more extensive and obvious to folks who rely heavily on this influx of money during the salmon season.It's pretty hard to make any money if the river is unfishable, as it was in consecutive springs or if the river is shut down during the summer months, as it was this summer. Add the striper controversy to the weather problems and you have a recipe for disaster.After a hue and cry from the salmon establishment, the Feds finally caved in and granted a limited commercial harvest for natives on the lower Miramichi River. I think this was the right move because striper numbers have exploded and were expanding into territory that had not been seen in modern times. This habitat just happens to be historic salmon and trout pools in the upper reaches of the Miramichi River system. I just hope that this new commercial fishery doesn't go too far and ruin the new sport fishery that has developed for stripers over the last few years. Time will tell the tale on this new situation and I will be keeping my fingers crossed on this one. Here is a photo of me with a limit of stripers from this spring. 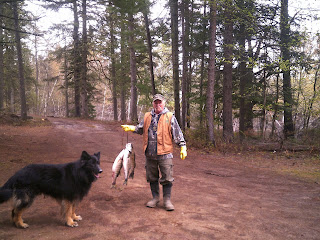 Usually, when things warm up and the salmon fishing slows down, pickerel fishing comes on strong. Not this year. It was very hard to get a good bite going this summer because it was even too hot for the warm water species! It is mid August as I'm writing this piece and things are just starting to cool off enough to put the fish and fishermen back in the mood. Water temperatures have moderated and a nice raise of water has brought water levels back to an acceptable height on the Miramichi and here at home on Salmon River.I guided a couple of Westerners at the tail end of this hot spell and they caught a few fish but we had to work for them. Ryan G.of  Red Deer, Alberta was out for a half day with myself and a friend, Jake Doherty. I think Ryan landed three pickerel, while Jake and I added a couple more. Here is a photo of Jake with a nice pickerel. 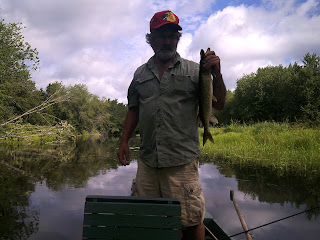 Jake and I also fished the 1st Annual JDI Fishing Tournament. This tournament was held during Chipman's annual festival and was a big hit with all the participants. There were good cash prizes in several categories as well as a nice canoe for the draw prize. Jake and I landed fish in three categories but unfortunately we didn't make the winners circle. I did get drawn for a $50 gift certificate which was great. I can see this tournament really taking off in the future after the sponsors get a couple of bugs worked out. Here is a photo of two of the pickerel we registered during the tournament. 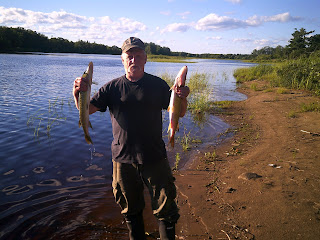 I also landed a nice smallmouth bass during the tournament. This species has been appearing more and more in recent years and the talk is already going around that this species will be added to next years tournament. I caught this fish while jigging a worm and spinner through a deep hole looking for perch. I thought I had hooked a good white perch and was surprised when the bass exploded out of the water right beside the boat. Here is a photo of that fish. 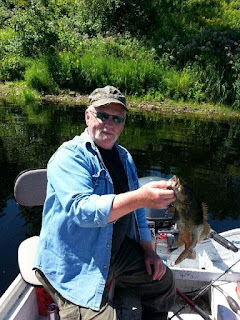 I also spent a nice half day on the water with a beautiful lady from Saskatoon, Saskatchewan. Kristin F. was here for a week and she loved her time spent fishing and site seeing on Salmon River. Here is a photo of me helping her land a pickerel after she broke off a huge pickerel that I estimated at over two feet long! 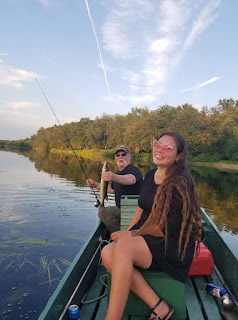 She was accompanied by my son Curtis and he landed a couple of nice ones during the same trip. We left from my house and I joked that Curt could probably catch one right off of my shore before we left in the boat. Sure enough, after a couple of casts he brought a respectable pickerel to hand. Here is a photo of that fish. 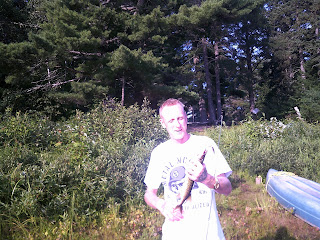 Later on, we fished one of the pickerel beds nearby and Curt landed a nice fish that taped out at 23.25 inches. Pickerel this size put up a great fight and it takes some skill to keep them out of the weeds and lead them to the boat. Here is a photo of that fish. This is a trophy sized pickerel in any waters and Curt caught a few this size while he was out. The next evening Kristin wanted to go out again because she was awestruck by the beautiful scenery and the abundance of wildlife. Curt took her out once again and he landed another good pickerel that she got a short video clip of. Another trophy sized pickerel. These sized pickerel aren't caught every time out but there are enough of them to keep things interesting. We can usually land a few and rarely strike out. Kristin thanked us and said she would return and next time she would bring her Mom and Dad. Hope to see you next year Kristin!
Salmon River is beautiful during the summer and fall months and there are so many photo opportunities it's hard to take it all in. Here is a photo of Kristin taken on the beach near the pickerel beds she was fishing. 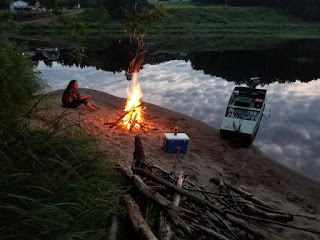 During the warm weather this summer, I travelled a lot during the evenings after things settled down and the temperature started to drop a bit..It was more about the scenery and visiting friends on the river than it was about the fishing but I always caught a few. Here is a short video clip I took near Stewart-McLeod Park which lies between my place and Chipman.

Fall is fast approaching and we will soon be putting out our deer and bear baits. This is a great time to be out in the woods, scouting and setting up cameras and blinds. There seems to be a few more deer around our hunting areas and the bear population remains strong. Hopefully, the weather will co-operate and not get locked into a hot spell like last fall. The first couple of days of the moose season last year were almost unbearable and many successful hunters were left scrambling to save their meat. Preparation is the key to saving your moose meat (or any other big game animal). Get your game dressed quickly and into cold storage. If you have the option to hang your meat for a week, all the better. I find ageing the meat for 7-10 helps tenderize it and improves the flavour. Although we don't have any moose tags this year, we still have fond memories of our hunt last year with Brad Doherty and family. Brad took a nice bull and the meat was delicious! Hear is a photo of Brads bull. 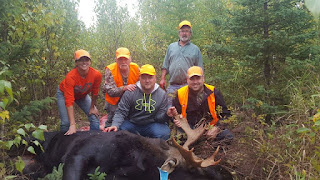 If any sports or vacationers want to spend some time on our waters or travelling our hunting grounds in the Grand Lake area, please don't hesitate to get in touch with me. We will put a nice package together for you!

Until next time, this is Dale Bauer saying "Happy Trails to You....Until we Meet Again!"