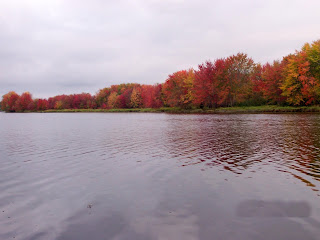 Temperatures have finally started to moderate here at home on Salmon River and for most folks that's a good thing. This summer was quite dry and hot and as we ease into fall we are finally starting to get some rain and cooler nights.
You know it's hot when even the pickerel refuse to bite and that's exactly what happened this August. Normally, we have great fishing for pickerel later in the summer but this year it was just too hot for too long. That's not to say we didn't get any fish. What I'm getting at is instead of having days of 15-20 fish, we were catching less fish, more like 6-12. I'll admit that even catching numbers like that is still pretty good fishing. It's enough to keep things interesting and keep the most ardent fishermen from getting fevered up! Pickerel fishing at this time of the year in low water conditions is something everyone should experience at least once. These fish are really aggressive this time of the year and many times the fisherman can see the fish moving quickly on the lure and quite literally parting the water in their effort to connect with the lure. I've seen more than one good fisherman strike prematurely during that initial rush instead of hesitating for a few seconds before striking. As I've said, it's pretty exciting. One particular day comes to mind as I write this. I took long time salmon guide Malcolm McCormick out for a half day of pickerel fishing a few years ago. Now old Malcolm had guided for fifty years or so on the Miramichi and Cains Rivers and had caught and landed countless salmon and grilse. By the end of the day, he told me that catching pickerel was as much fun as catching a grilse. He got quite a kick out of the savage attack of the pickerel when he got a strike. It was the first and only time old Mac ever fished for pickerel before he passed away a few years ago. Here are a couple of photos of Mac landing two of several pickerel that day. 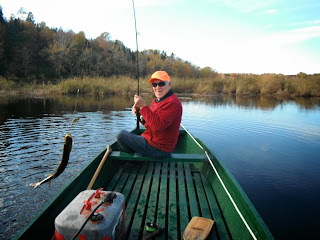 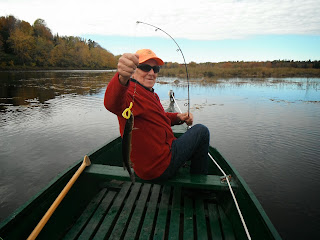 I liked old Malcolm and learned a thing or two about salmon fishing from him during the short time I knew him. If any reader would like to hear more about old Mac McCormick, just click on this link http://hargroveandbauer.blogspot.com/2013/10/the-bite-hunt-and-vintage-outdoor-stuff.html .

I managed to get out a few more times with my good friend Jake Doherty before the season ended and we landed a few nice fish like this one. 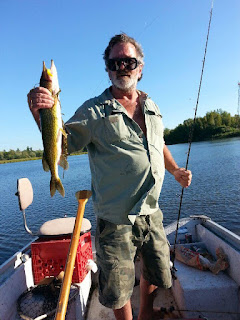 Jakes pickerel was taken near Salmon Harbour. This area has been producing some nice fish this year along with a couple of species we don't see very often. Here is a photo of me with a fish I landed late this summer. 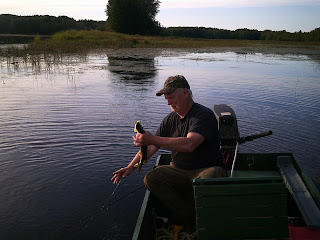 Smallmouth bass are starting to show up in numbers as well as the odd striper. These fish are being caught while fishing for other species and I'm sure we will see more of these fish as the sport  continues to grow in our area. Here is a photo of Adam M. with a nice smallmouth he took this summer while fishing the harbour area.

Adam also caught a small striper earlier in the year at the same location. A friend of mine who rents out his cottage on Grand Lake told me his guests were catching schoolies right off the dock. This is great news for the Grand Lake area and our fishery is only going to grow as we move forward into the future. Jemseg has been producing some nice stripers over the last few weeks. Fishermen seem to be having the best luck after dark while fishing live eels and mackerel. Here is a photo of a nice one caught last week by Captain George Palmer at 4:00AM. This striper was 37 in. and over 20 lbs. Nice fish Captain! 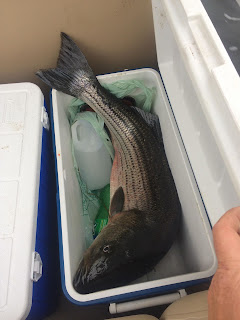 I wish I could be as positive about the state of the salmon fishery but unfortunately there isn't a lot of good news to report. The only place that seems to be getting any fishing is in the lower part of the main Southwest Miramichi River. This part of the river always fishes better during years of low water and there are reports of some fresh fish coming in on the tides but many fear it is too little and too late for decent fishing up river and on the Cains. Salmon fishing has experienced a serious decline in recent years and some drastic measures must be taken or all could be lost. It has happened before. Just look at what happened to the Saint John River and other Bay of Fundy Rivers. I always look forward to fishing the Cains River in the fall but I don't think it will happen this year unless we get some water before the season ends on Oct.15th.

Our waterfowl season is well under way and Dallas and Jamie set up for geese on Parkhills Bar on the first day. They only got four geese and said that another group hunting across the river from them had about the same shooting. I don't believe in inflating numbers when it comes to hunting and fishing and our area is experiencing poor waterfowling this year. Ducks and geese must have water and the drought this year moved most of the birds in our area out to the big water around Grand Lake. If we can get some water,we may get some decent shooting for migrating northerns as the season progresses.
There are good numbers of grouse in our area and one of our government agencies is looking for hunters to turn in hearts from birch and spruce grouse for examination to see if any Lyme disease is present. There are some woodcock around but drought conditions have made local birds a little scarce. Hunters will be looking for migrating birds as the season progresses this month.

Another moose season is in the books and although we didn't have any tags this year, we always have fun seeing how our friends and folks from away make out during their hunt. This years hunt had cool weather and a full moon which provided excellent conditions for hunting New Brunswicks' largest big game animal. The overall kill was down 8% and the registration station for our area in Chipman was down 15%. That being said, there were still some great bulls killed in our area and in the northern zones, in particular.  Here is a photo of one of the largest bulls taken this year. This trophy moose was killed by a hunter in one of New Brunswicks northern zones. It had 26 points and was 63 inches wide. That's a monster! 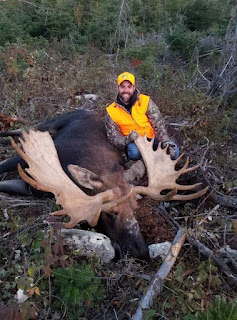 This next bull was taken in Kent County which is a little closer to home. This moose had a very distinctive rack with a beautiful colour 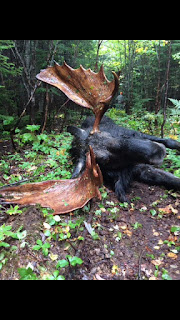 Last but certainly not least is another great bull harvested this season in the northern part of the province. This trophy bull had a spread of 58.5 inches. 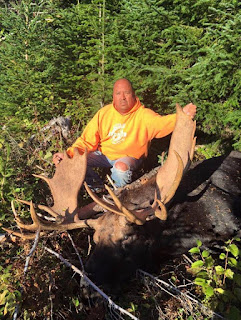 The biggest bull registered at our station was killed by Martin Beers in zone 13 near Salmon River. Estimated weight of this old warrior was 920 lbs. His rack had 11 scorable points with boards rounded off considerably. it was felt that this old bull was going downhill but it was still a great trophy. No photo for this one but he's here on the scoreboard at number 3. 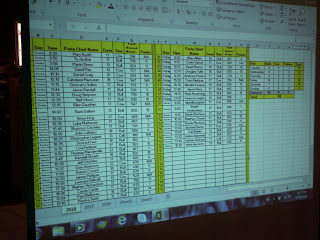 This next shot shows the results of the 2018 New Brunswick moose hunt. 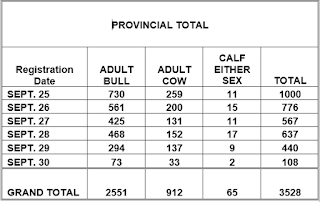 Another banner year for moose hunters here at home and right across the province.Lets hope this trend continues into the future.

Ken and I have started setting up our deer stands and we are seeing signs that our herd is growing a bit. The southern end of Grand Lake has a thriving deer herd but access is difficult. We have been setting up on Crown land near these expanding herds with good results..As usual, bears are hard to keep off of our deer baits but we take it all in stride. Many times we find trophy sized bears at our deer baits and it's hard to consider that a bad thing. Our area is crawling with bears and it's just a fact of life you are going to get some at sites set up in archery season. Later in the deer season, the bears are starting to den and the problem isn't so severe. I will have some trail cam photos of some of the animals we will be hunting in my next post. Please check previous posts for photos of some of the quality animals we have in our area.
I want to wish my Canadian readers a Happy Thanksgiving and if any Sport would like to hunt or fish with us, please contact me through the channels provided.