Usually at this time of the year I am writing about fishing black salmon on the Miramichi River but not this year. This springs freshet is turning into a bit of a pain in the neck for a lot of people. For many river folks, it was business as usual but for some unfortunate souls it was nothing short of a nightmare. People in the town of Sussex, sixty miles to the south, had flooding in areas never touched before. This was caused by a large rainfall that prompted some of the heavy ice to break up and jam and the water took the path of least resistance right into the heart of Sussex. It was a devastating scenario with heavy flooding right into the business section of town and the damage is estimated to be in the millions of dollars. Things have settled down quite a bit but the clean-up will continue for most of the spring.
Closer to home, the Salmon River and the Grand Lake system had a large raise of water but there was much less damage to property. I'm assuming the large Grand Lake basin allowed the water to dissipate through the system and not pile up as it did in Sussex. We still have a lot of ice in Grand Lake and the lower end of Salmon River and we are getting a rain event as I'm writing this. I know I will be keeping a close watch as this rainfall unfolds and I can only hope the river doesn't come up too much. This rain and the accompanying melt may push the river over it's banks in the Chipman area. There has already been a couple of camps washed away up river and heavy damage sustained to others. As it stands in the Chipman area, the water had been starting to drop slightly but it will likely rise again with this rain. The next photo shows the river in front of my house on the April 15th opener. Note the three geese that appear to be lost. 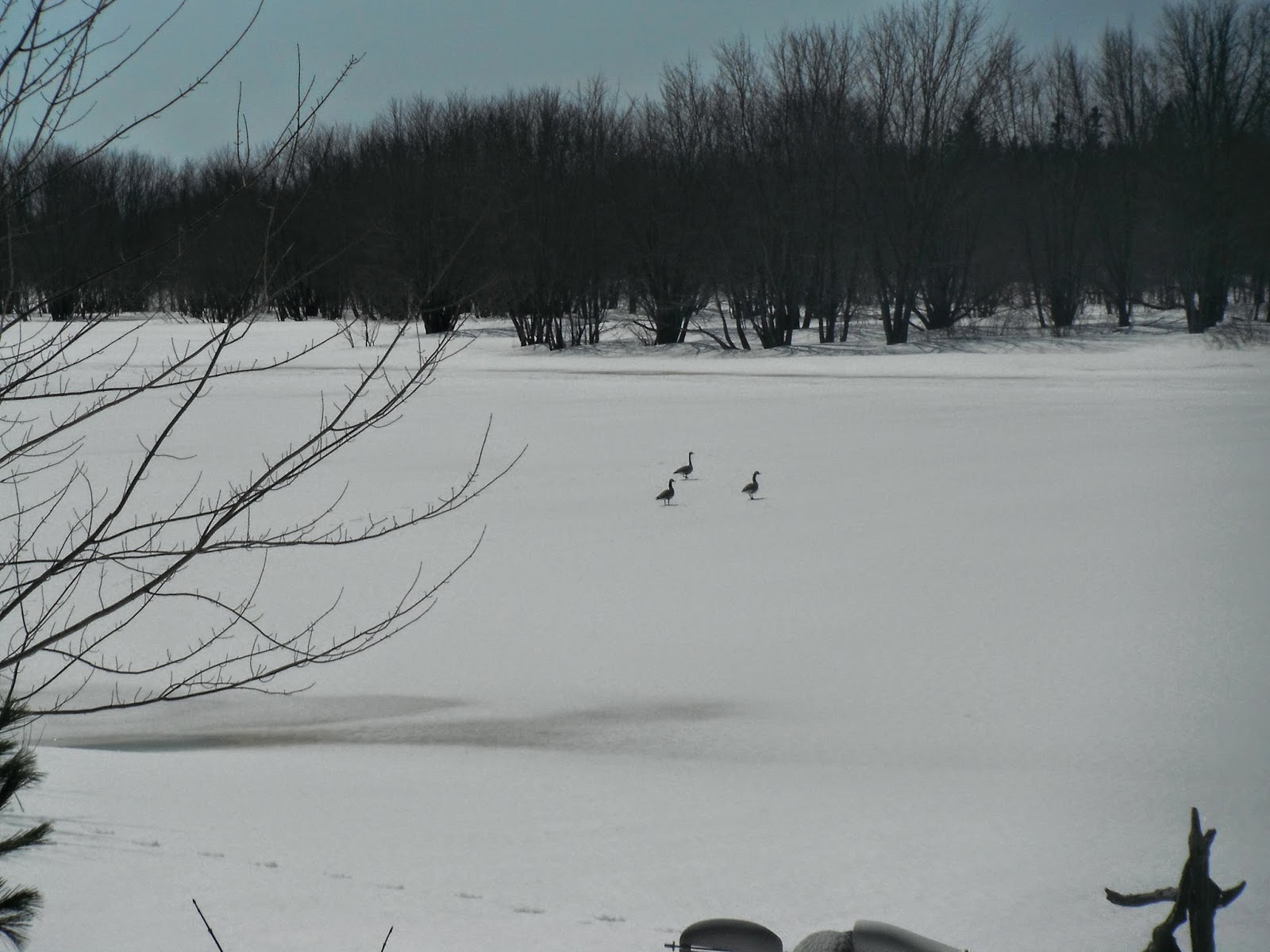 The ice has broken up since this photo was taken and we have open water above Chipman. The Burpee Bridge on Gaspereau River took a beating and lost a few boards but the bridge didn't seem to sustain any real heavy damage. Many people were worried that we would lose yet another covered bridge because the Cherryvale covered bridge was floating down the Canaan River last week and we came very close to the same thing happening to our bridge.
The ice has cleared out of the upper Miramichi River except for one stubborn jam above Boistown. A recent report says that  jam is ready to give way with the raise of water we are getting after the rainfall that occurred over the last couple of days. This season has been a bad one for the outfitters on the Miramichi who rely heavily on a good spring season to help maintain their bottom line. One thing I will say is that most outfitters weren't taking any chances and were staying off the water until conditions improve. No fish in the world is risking a life over even though sports may be willing to take a chance on getting out in such poor conditions. I did see a report of a guide and sport who landed a large salmon but I wouldn't say it was a smart move on either ones part being out in those conditions. Here is a photo of Nelsons Hollow looking down river towards Doaktown. 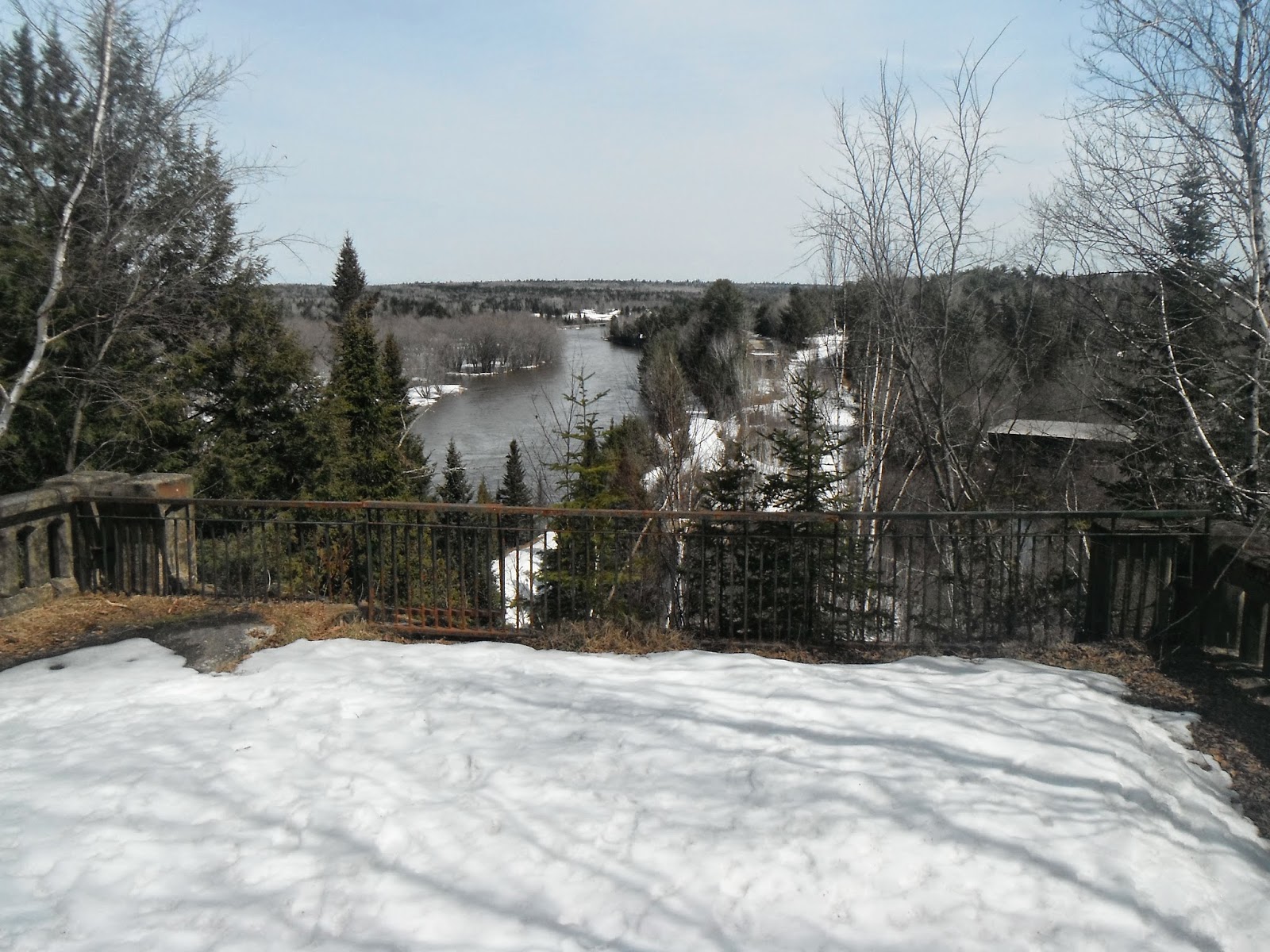 Residents who live along the shore near the bridge in Doaktown were under a voluntary evacuation order last week but that has been lifted since then with the receeding water levels. My good friend Glen Davidson was getting nervous but decided to ride the situation out as water and ice threatened to invade his property. His road was closed for a week or so but things are pretty much back to normal now. Here is a photo taken last week during the worst part of the flooding when the road was closed. 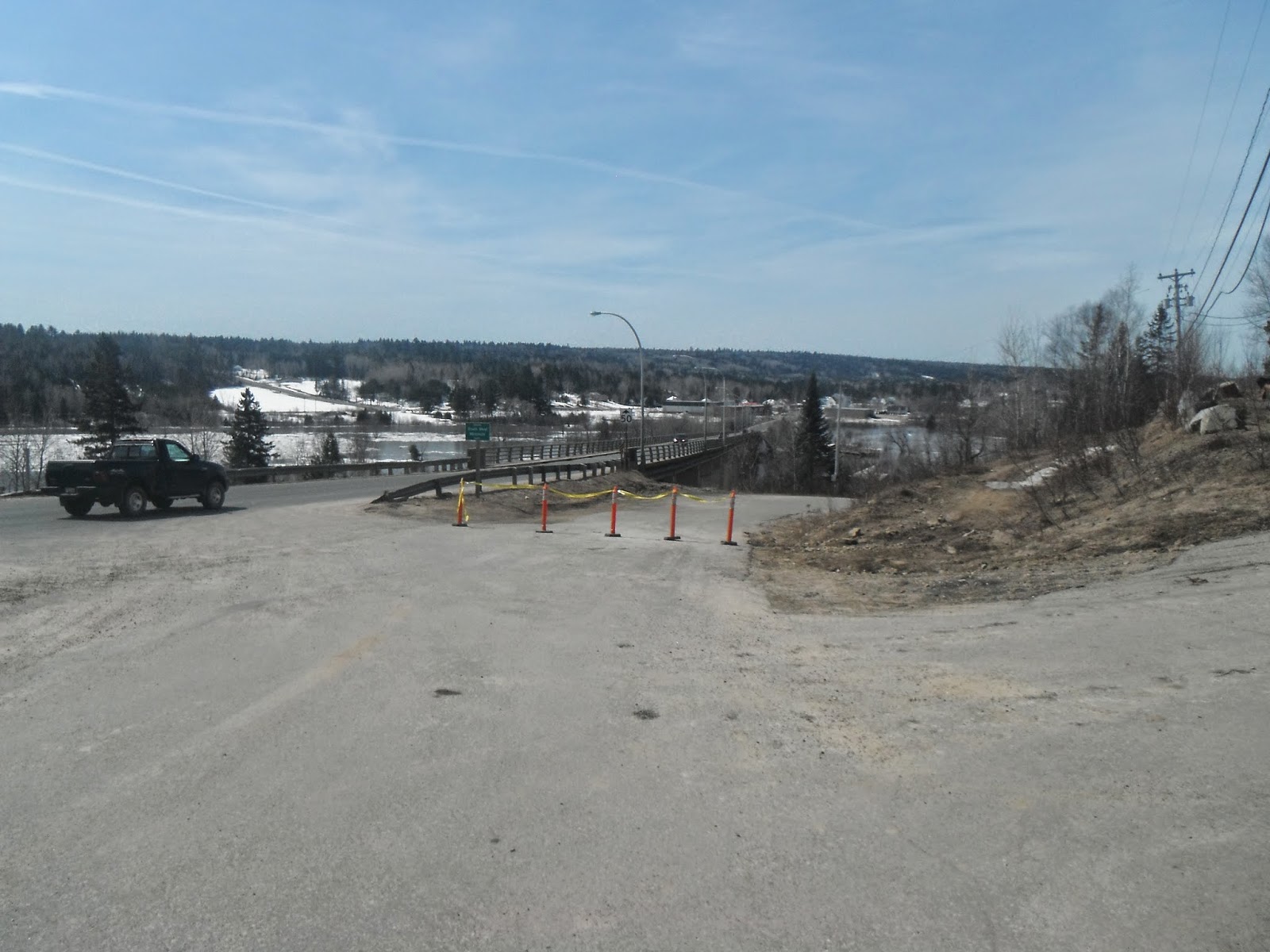 I have been getting some reports of fish being caught by sports in the Blackville area and a smattering of fish in the Doaktown area. Overall, the fishing is still a week away from being decent and by that I mean warmer temperatures, lower water levels and less ice running. The Miramichi River on cold days and in high water is not a fun place to be. My advice is always "better safe than sorry" when poor conditions prevail such as those we have now.
Here is a photo composite of Pops Point on Grand Lake West that was flooded by a huge wall of ice. As you can see from these photos the ice was very thick this winter on the lake. 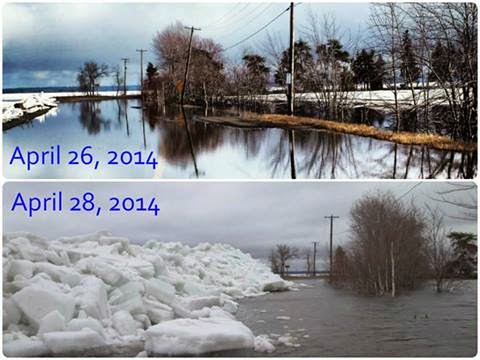 The Village of Chipman is still not out of the woods as far as flooding is concerned. Water in the lower Salmon River remains very high and at near flood levels. I have been surrounded on two sides by high water for nearly two weeks now here at home and my pump has been running for about the same length of time. This is always a nerve -wracking time but on a year like this, it's especially bad.
This post was mostly about the weather but that's what most folks have been dealing with for the past month. Ken and I have put most activities on hold but we will be getting out next week for some fishing and we will be putting bear baits out the week after that. Next month should start to bring things along nicely and I'll have a little more to talk about. In the meantime,  I'll give a short synopsis on what to look forward to this coming year outdoors.
Look for good runs of sea-trout and salmon this year. A late spring with lots of water is a good news scenario for these species and there should be good numbers around by mid June. The run of white perch on Salmon River could be delayed this spring because of the persistent thick ice in Grand Lake. Normally, these fish run up river from Grand Lake about the first of June but all bets are off this spring. The same goes for the run of shad that runs up salmon River. The local shad tournament is scheduled for June 7th so keep your fingers crossed!
Our deer herd had a terrible winter this year and the latest numbers bear out this fact. Preliminary numbers released put the losses at between 20-25,000 head lost. The bulk of these deer were young of the year and old bucks past their prime. If anyone is planning a white-tail hunt this fall in New Brunswick, you would do well to stick to the southern half of the province and stick to private ground. The big forestry companies and the government have done everything in their power to destroy our deer herd on Crown land and citizens are fed up especially since the dirty deeds that have gone on in the past have been brought to light. The first protest is scheduled for May 13th in the capital and it should be an interesting event!
The two bright spots are the numbers of moose and black bear that roam New Brunswick's forests. Both these species are at an all time high and trophy animals can be found in all sectors of the province.
Woodcock and grouse numbers are still up in the air because good nesting conditions determine whether there will be a surplus of birds or not. The same goes for our duck numbers but if I were a betting man I would say the ducks should have good nesting conditions this spring because of the abundance of water.
Hopefully, next month will show improving weather conditions and we can hit the bush running. Until then, this is Dale Bauer saying "Happy Trails to You.....Until we Meet Again"