The long winter is slowly coming to an end here at home on Salmon River and what a winter it was! A Nor'easter just blew through last night and it was a good one. The winds were high and a good dump of snow made for terrible conditions. I have heard that storms like this even have a name. Sheila's Brush is the name given to late storms in March around Saint Patrick's Day. I'm Irish on my mothers side and this is the first I have seen reference to it. Now when I curse the bad weather at this time of year,  I can put a name to it. Old Mother Nature has the last call and I guess with the type of winter we've had this year, she decided to give us one more kick in the pants. Usually, by the middle of March the weather starts to moderate and although it may be messy, the snow pac is starting to melt with above freezing temperatures during the day time. Let's just hope that we are now heading in that direction.

The 33rd annual New Brunswick Ice Fishing Tournament was held at the Key-Hole at Grand Lake this year after being post-poned for a week due to poor ice conditions. I'm not sure things improved much over that week because there was still a lot of snow with 6-8 inches of slush under the snow wherever it drifted a bit. It also turned very cold and when we stepped on the ice the temperature was -26 C. That's quite chilly for older folks and kids but there was still a good crowd on hand for the 10:00 AM start. The next photo shows the weigh-in station/headquarters for the tourney. 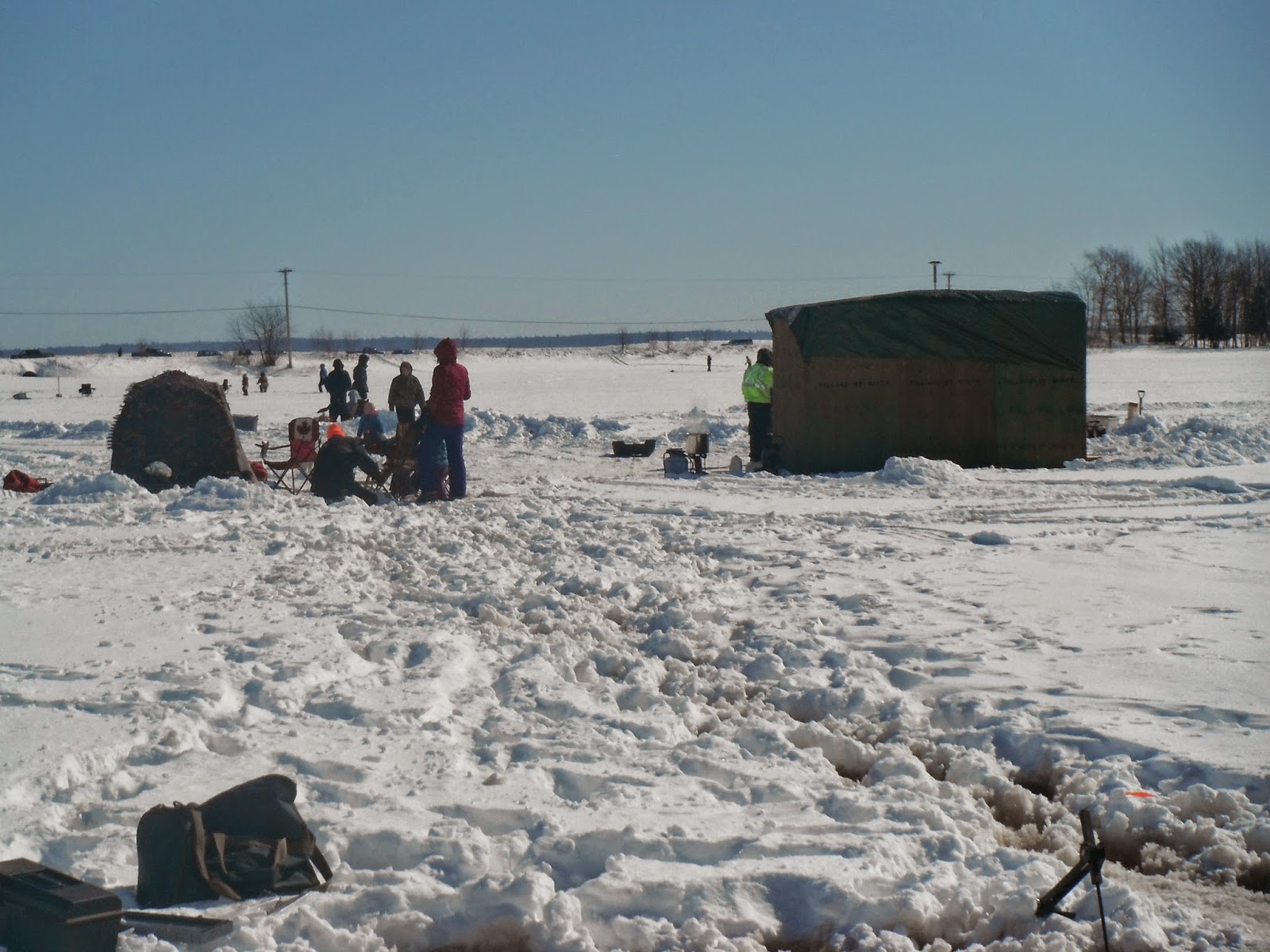 If you look closely, you can see how slushy the ice was that day. That photo was taken from our location during the tournament.  Even being that close, it was very difficult travelling and there were a few people who ended up with wet, cold feet. That can really take the fun out of an otherwise great day. The next photo shows us fishing our spot. 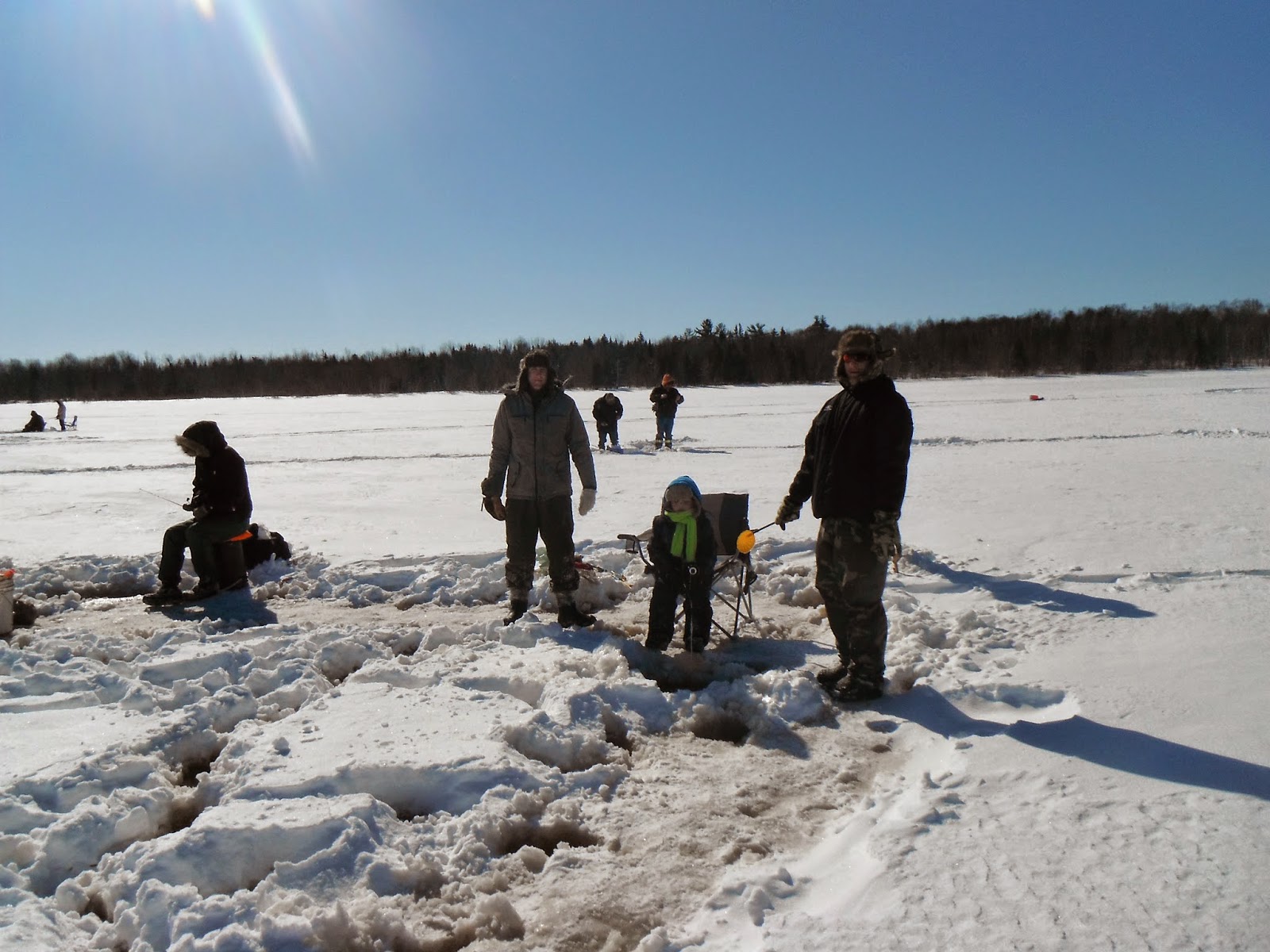 After drilling a few holes we packed down the slush with some snow and made a frozen bridge to walk around our area. It worked quite well and as long as we stayed put, it was great. But if we had to go to the weigh-in shack, it was back to slogging in slush.
This tournament has always been a popular event and has evolved over the years to its present form. I know one thing for sure. Events like this are successful because of the volunteers who dedicate time and energy to bring it all together. Two of the long time volunteers for this tournament are Brian Glenn and Jack Trembley and without them things probably wouldn't run along quite as smoothly. Councillor Dwain Barton and Lisa Duncan are also fellow committee members. This family oriented tournament is usually a great day in the outdoors even when the fishing is a bit slow. There are hot dogs and hot chocolate for all the participants and that part was well appreciated on this frigid day.
We set up in roughly the same spot this year as we did last year. We had good luck in this spot before so we stuck to the same game plan again this year. We wouldn't be disappointed. I was waiting for a start signal and I looked at my watch and it was 10:10 AM so I told my son Curt and the others that we were good to start fishing. I barely got my line down the hole and gave it a couple of pulls when I heard Curt give a whoop as he set the hook on a big pickerel and promptly snapped the line trying to get it up the hole. As this was happening he looked off to the hole nearest him just as the rod and all was going down the hole. He gave a leap towards it but was a second  too late. Things settled down for a minute and he lowered his line down another hole and immediately he had a nice fish on. Curt quickly brought this one in and checked the time. It was about 10:15 and Curt had a fish to register. As he slowly made his way to the weigh-in station I could see it was a nice fish. From that point on we all caught fish as if we were taking turns. Here is a short video clip I took half way through the tournament.  One of our team members, Chris Pollick, caught a bullhead early on during the tournament and as the day progressed added two more pickerel around 18 inches. The fun really got going when my grandson Jackson started whooping " I got one, I got one". The trouble was, he had been saying that since the start of the tourney so nobody was really paying too much attention until I looked and saw that his rod had a significant bend in it and Jack was struggling a bit. His father, Gary, rushed over to give him a hand and up through the hole came a pickerel that measured about 18.5 inches long. Everyone was pretty excited to see Jackson land his first fish through the ice. After things settled down a bit my daughter Chrissy landed a nice pickerel. Here is a photo of that fish. 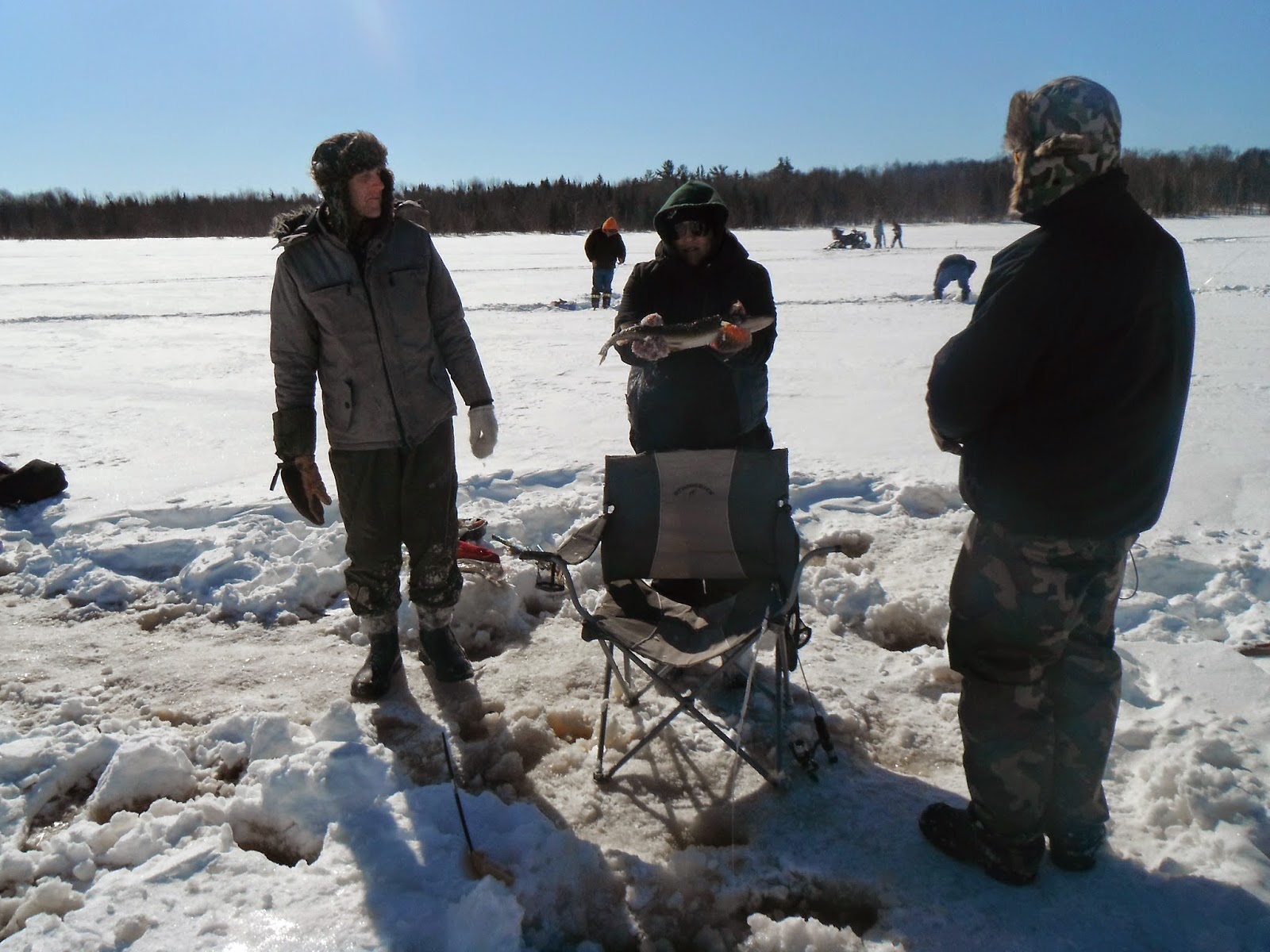 The bite was on for our crew at intervals all day long. When the horn went to signal an end to the tournament, I think our total was six pickerel and one catfish. We also lost two or three fish at the hole. We registered four fish and only one got bumped out which was an 18 inch pickerel. Minto Mayor Eric Barnett and Councillor Derrick Quigley were on hand to help out with the hotdogs and beverages. Their help was much appreciated by all those in attendance.
As I said earlier, conditions were pretty rough on tournament day but there was still a pretty good turnout. Mayor Barnett took on the job of handing out prizes and the kids all got something to take home along with the memories of the day.
After all the tabulations were done, first place in the 16 and under category went to Jacob Barton with a 23.5 inch pickerel. Second place went to my grandson Jackson Bauer- LeBlanc with a 21.75 inch fish and third place went to Tyson Sypher who also registered a fish of 21.75 inches. Jackson registered his fish first so he took 2nd place.. In the 17 and over category, my son Curtis took first place with a pickerel that came in at 22.25 inches. Second place went to Johnny Egers who registered a fish that was 21.25 inches long. Third place went to yours truly with an 18.75 inch pickerel. There were also prizes given out for the oldest and youngest tournament participants. After the ceremonies were done, we posed for pictures that will be looked back upon with fond memories in the future. It was a special moment for the Bauer Boys, having three generations in the winners circle and the next photo shows us posing with our prizes. 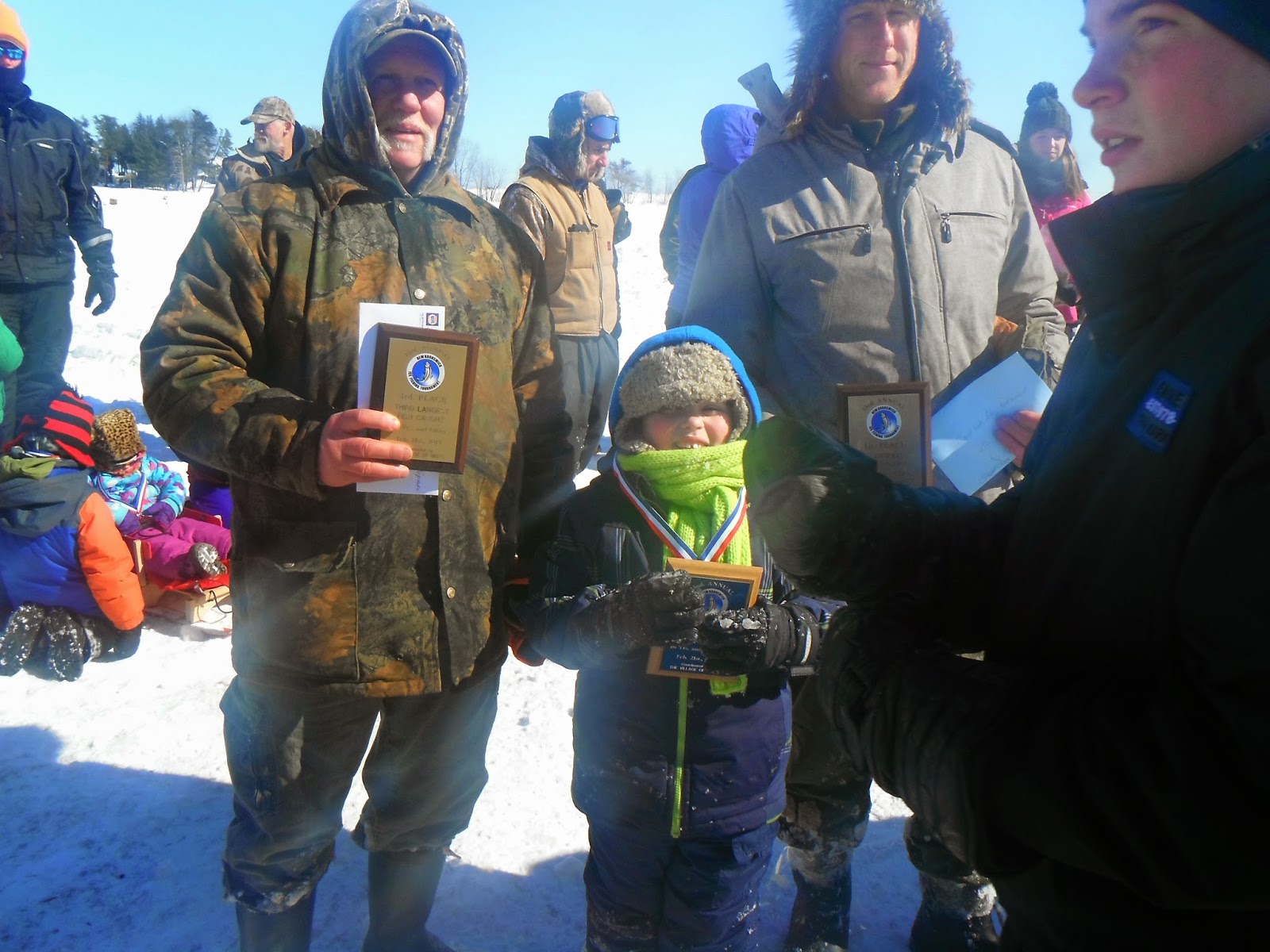 Again, this is a great family tournament and everyone always has fun even if the fish aren't co-operating but that doesn't happen too often. If you reside within a days drive of Grand Lake I would encourage folks to make the trip down to the lake for next years tournament. You won't be disappointed.
All of this snow has made it hard on the animals as well as humans. The coyotes had a very hard time this winter and I'm sure the population suffered significant losses. You won't find people in New Brunswick shedding too many tears over that fact. Coyotes wreak havoc on our deer herd during this time of the year when the crust freezes and they travel on top of the crust and deer are punching through into deeper snow. But when it comes to fox, most folks have a soft spot for these small dogs and I include myself in that group. I have been feeding a couple of fox most of the winter because I thought they were having a hard time getting a bite to eat. I don't mind having fox around as long as they are minding their P's and Q's. They take a lot of vermin as part of their natural diet and I like watching them as they go about their daily routine. Here is a short video clip of me taking a little grub out to the feeding station where I feed Reddy Fox.
As we head into spring, most outdoorsmen are looking forward to the April 15th fishing opener. I think it's safe to say there won't be much fishing before the 1st of May this year because of the heavy snow pac and cold temperatures we have been experiencing. I guess we will just have to wait it out and see what Mother Nature brings in the near future.
I am expecting  a delay in the spring bear hunt also this year for obvious reasons that have already been mentioned. That doesn't mean the spring bear hunt will be poor, just a little late getting started because things have to warm up before bruins get moving around good and hitting the baits on a regular basis. New Brunswick has made a few changes to the bear hunt. Hunters can now take two bears per year in an effort to curtail the growing population here in our province. Personally, I don't like the way our government has set this hunt up because I feel it will ultimately hurt the bear population. I think the hunt would have been better overall with a split season of one bear in the spring and one in the fall but it is what it is.
I would like to remind non-residents that this is the time to apply for a coveted moose tag. We have a very good moose population and a high success rate especially for guided non-resident hunters. If any readers are interested in applying for a tag just follow the links on our web site or here http://hargroveandbauer.com/hunting/ You have about a one in seven chance of being drawn. Those are pretty good odds in a lottery type draw.
This is Dale Bauer saying " Happy Trails to You.....Until we Meet Again!"
at March 25, 2015 No comments: