NO DOG DAYS THIS YEAR!

We are now in what is supposed to be the dog days of summer but another large rain storm and lower temperatures has kept rivers and streams higher than normal. This type of scenario was played out in 2011 and it proved to be a godsend for Atlantic salmon returning to New Brunswick's rivers. There are good numbers of salmon in the Miramichi system and the water conditions are great for the returning salmon but these fish are proving to be very hard to hook. Many times they are passing by and you may only get two or three casts over them and they are gone on their way. This can make for some tough fishing in circumstances such as this but the fish are there and perseverance will usually be rewarded with a tug if you stick with it.
One peculiar thing I noticed this year is the leaves on the maples that line Salmon River near Chipman have taken on a blush of red. Normally we don't see this coloring until the middle of September but I think this premature reddish color is due to the prolonged high water flooding these trees for days on end in the middle of summer. They must have been starved for air in the root zone and that is what caused the leaves to turn red early. Here is a photo I took of the maples on Moon Island and you can see the effect the high water had on these trees. 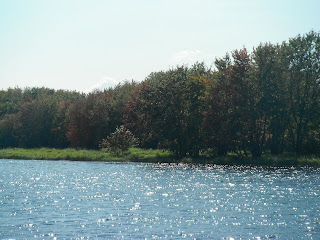 As I've said before, when the water is high on the Miramichi it is usually blown out here on the lower Salmon River. That is what we have been faced with for most of the summer this year. This makes for some very difficult pickerel fishing because it scatters the fish and makes it harder to target them because they are all over their habitat. It also gives them access to more food sources and makes it harder to get them to strike. We're hoping the water will continue to drop because some of our best days on the water can be in the fall when the conditions are right. The next photo shows me with an average sized pickerel. Note the rig I use in higher water conditions. The larger sized spinner helps to get their attention. In more normal low water conditions I exchange the large spinner for a smaller one and might modify the leader set up to match the spinner size.
The next photo shows Donna A. with a nice trophy sized pickerel she landed just at dark. 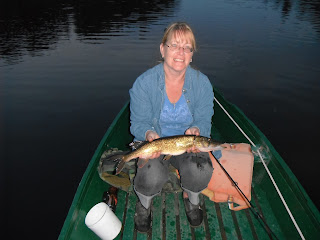 This is a great shot of one of our spectacular sunsets here at home on Salmon River.
I've been seeing a nice mix of ducks and geese in our area on Salmon River. We had good nesting conditions last spring and I noticed many of the young survived the gauntlet of predators that prey on both eggs and ducklings. On a year with high water, many times the best hunting will be in the back guts and smaller coves because the larger meadows are flooded and this makes the food harder to access. In a situation like this a half dozen decoys out front and a good natural blind with good personal camo will many times have ducks dropping in your lap. When we are out fishing pickerel during the summer we keep an eye out for flocks coming and going to their feeding and resting areas. Like most game species, ducks live on their stomachs. They feed and rest sometimes in different spots so you have to pay attention to the flights in the area you are going to hunt. One thing for sure, they won't be far from a food source like wild rice, duck oats or duck potatoes. Find the food and you'll find the ducks or geese. Sometimes we will pass shoot a spot if we see the ducks are squeezing through a spot while travelling to their feeding and resting areas. Many times these spots remain good for years as long as conditions remain unchanged. Unfortunately, many good waterfowling spots have been taken for years by generations of hunters and this can make it difficult for beginners or a hunter not familiar with an area to find a good spot on the marsh without ruffling someone's feathers. After the first day,some spots will start to open up and a determined hunter can usually find a decent spot with a little scouting. As a matter of fact, scouting is paramount to success when waterfowling. Things change quickly as local birds are pounded and dispersed and migrating northern birds begin to show up. Those big, orange legged blacks can provide some great shooting later on in the season here in the Grand Lake area. This is a photo of a nice male wood duck we got on the first day last year 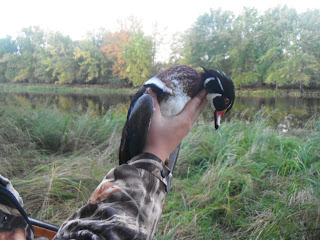 The next photo shows me walking a meadow checking for ducks back a couple of years ago. We had a great hunt that year with my son Curtis and my old friend Allen Davidson and a few others. Allen didn't shoot that day but he cooked up a great feed for the crowd. 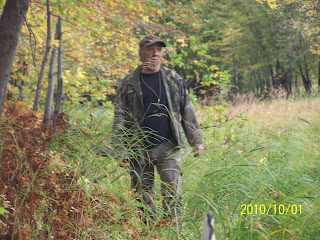 The next photo shows Curt and Allen getting our lunch ready. As you can see from the photo we try to eat well when we are in the bush. 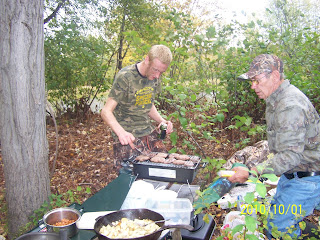 We've been seeing good numbers of partridge while travelling the back roads and fishing for trout. The nesting conditions this year were mediocre at best.  This spring brought a lot of rain and cool weather and that caused a higher mortality rate in the chicks. Still, the numbers are as good as last year or maybe a little better. I've always held the belief that a partridge hunt is a great way to start off young hunters when introducing future hunters to the sport. It's usually a relaxed outing with either family or close friends and grouse will many times hold long enough to give novice hunters a good shot while under the tutelage of a mentor. This is an important first step and provides the foundation of how future hunts will be conducted. Safety first and the fun and excitement will follow. Our area around Chipman has a vast network of woods roads and bike trails that passes through good bird habitat. This makes it easy to drive around in a truck or bike and get lots of opportunities to take birds along the trail. Bird hunters can also take a more traditional route and walk old portages and overgrown apple orchards. Be forewarned, these birds can get very spooky as the season progresses. Odds are, if they have been fired at or bumped, they will bust out at the first hint of danger. I like to hit these spots early in the season before they get too much hunting pressure.
The last couple of winters have been kind to our deer herd and survival rates have been better in our hunting areas around Grand Lake. There seems to be more yearlings around this year but one thing we are concerned about is the fact we aren't seeing as many fawns as we would have expected. When we do see a doe she usually only has one fawn with her. I don't know if this is a localized thing or not but we will know better as we get closer to the season. On a positive note, a prominent member of the New Brunswick outdoor scene,Kevin S. AKA"Grey Ghost" of Fredericton put together a very good proposal for the Fredericton Fish and Game Club on changing the dates for our annual white-tail hunt. I don't know if it made it to the right government people or how it was received but I read the proposal and it was well researched and provided persuasive reasons why the hunt should be shifted to a later date. It's high time DNR officials respond to good, forward thinking proposals and start implementing these ideas in order to enrich our outdoor experiences here in New Brunswick.
The annual moose hunt is coming up in a few weeks and anyone lucky enough to draw a tag should have a great hunt. There is certainly no shortage of moose in New Brunswick but some areas are better than others and there is competition for these areas so it pays to get out and scout around a bit and try to get a spot that won't get disturbed after the first morning. There were some tremendous bulls shot in our area last year but I took a very fine eating four point bull. Those big horns are great but I talked to one hunter who knows how to handle meat and he told me you could hardly cut the gravy on the big bull he took last year. My personal viewpoint is on a three day moose hunt you can't be too fussy. I will gladly take any moose I see on a hunt except a calf. The next photo shows me with the bull I took last year. 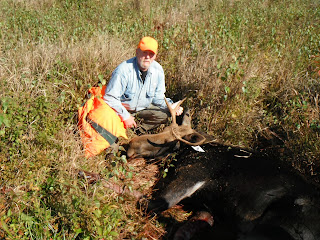 I continue to pick up some nice vintage items and the next photo shows a nice cocktail shaker for mixing drinks. It is decorated with pheasant and dates to the Sixties. 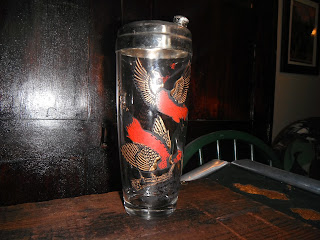 The next item is a moulded plaque depicting ducks in flight. This item also dates to the Sixties. 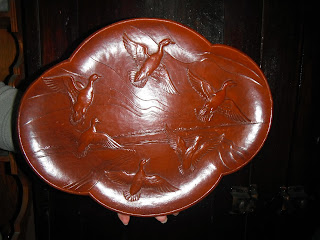 As summer winds down and we start to switch gears towards fall and hunting season I would encourage anyone looking for a day or a week afield to contact me to make the arrangements to come for a visit to our beautiful part of the world. You won't be disappointed. This is Dale Bauer saying "Happy Trails to You......Until we Meet Again!"