The 2012 New Brunswick deer season is wrapped up for another year and although it wasn't a good year for me personally,the harvest numbers are up quite nicely after bottoming out a couple of years ago. This can be attributed to the low snow pack last year here in New Brunswick and the extra five hundred or so doe tags,mainly is the high density doe areas in the private, southern coastal area of N.B. The final figures are in at 6030 deer killed in 2012 in N.B.,up twenty-six percent over last years numbers. What is especially encouraging is the fact that this years kill numbers is the highest since 2008,which indicates an increasing trend over the last four years.If we can get a few mild winters in a row,it would certainly go a long way towards increasing the deer numbers in New Brunswick. The depth of the snow has a direct corralation to survival numbers of the deer herd here in N.B and we are at the mercy of Mother Nature on that one. I think if we hunters here in New Brunswick can each do some small thing to help the deer in the areas we hunt,then when Mother Nature is harsh with the deer ,our help will soften the blow and likewise,allow the numbers to jump qickly when Mother Nature is kind to the deer. Remember,a three and a half year old buck here in N.B. can be 200 lbs. dressed and sporting a nice 8 or 10 pt. rack. Three years goes by pretty quickly and with any luck at all,there would be some nice bucks around after three or four years of help from deer hunters and Mother natures co-operation during the winter. I think deer hunters who have private ground here in N.B. are already managing their ground to help deer survival rates. Give them food,shelter and control the coyote numbers on your hunting grounds and the deer numbers WILL increase. I think we seen some evidence of these facts in the nice bucks taken in the province this year. A lot of these bucks were taken in the southern half of New Brunswick on private ground. The following photo is one of a nice buck taken by Chris D. of Douglas Harbour near the southern end of Grand Lake. This area has a lot of private ground and has been a haven for nice bucks for as long as I can remember. 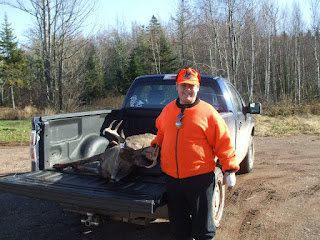 Please note Chris's bandaged hand. He recieved a nasty cut while dressing his deer. This happens a lot more often than you would think.The excitement of killing a nice buck,coupled with cold hands and working in slippery conditions,can result in a cut hand,sometimes severe. Slow and easy wins the day in these situations.
As I said at the start of this post,it was not a very good season for me personally. As a matter of fact,you could say it was the season that wasn't. After scouting two good areas in the Grand Lake area and finding some very promising buck sign after the duck season opener,I was struck down with a dibilitating health problem that put me down for the whole deer season except for four hours on one afternoon and I had to force myself to go for even that short time. Kenny was called away to Nova Scotia on a job for most of the season so he missed out on most of the hunt. My good friend,Allen Davidson killed a nice little spike horn for meat and guided Steve D. of Cold Lake to a nice four point buck in the Mountain Brook area. I had told Steve if he really wanted to kill a deer in this area to take the first one he seen wearing horns because there are not a lot of deer in this country. Steve took that advice and got a nice little buck for his efforts. On a side note, Steve said he seen a panther while hunting in Mountain Brook ,near the Gaspereau River.
Because I don't have a lot of photos for this post,I am providing a link to NBHunting so the reader can view some of the bucks killed this year across the province. Please note that most of these bucks were killed in the south and south-western part of New Brunswick. Just click on this link/http://newbrunswickhunting.com/forums/index.php?/topic/4123-2012-whitetail-harvest-pics-only-no-comments/ to view the photos. As you can see from these photos,some very nice bucks were killed this year,with a few being world class trophies. New Brunswick has the potential to grow trophy bucks. We just have to get all of our ducks in a row to realize this potential. If nothing else,these photos provide a glimmer of hope for the future and thats a good thing.
I continue to pick up outdoor related vintage items during my travels and I will feature three of these for this post. The first photo shows a nice cast iron stag in repose. I don't know much about this item including the date of manufacture or what it decorated when it was manufactured. I do know that I liked it from the moment I seen it and I always buy what I like.
The next photo shows a nice item made of iron and tin that was used in farm houses and camps to hang kitchen pots and pans as well as kitchen condiments. 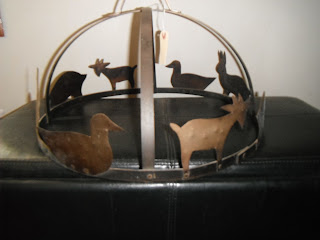 Again,this item is hard to date but I would guess it is from the Fifties. It could be a little earlier or later but I can't say with any certainty.As with the previous item,I liked it as soon as I seen it and bought it without hesitation. Finally,I picked up a nice cast iron hatchet decorated with some red paint. I would say this hatchet is from the late Fifties or early Sixties but that is just a guess.
There is still a little hunting to be done for partridge,rabbits and coyotes before the big freeze settles in over the Maritimes so don't hesitate to get out there,especially for those deer killing coyotes.
Until next time,this is Dale Bauer saying"Happy Trails to You.......Until we Meet Again!
at November 29, 2012 No comments: