TOO MANY SPECIES...TOO LITTLE TIME

The weather here at home on Salmon River has finally decided to moderate and most folks are happy to see it come. Summer is officially here and the water levels are at a good level for angling and not too warm. Local anglers have been hitting the water hard this month and have been getting some nice fish.

The gaspereau are on their way out and I have been watching large schools of them slowly dropping back into Grand Lake The shad run was a little late this year but anglers participating in the 13th Annual Monte Farrell Shad Tournament caught fish  and it was a good day weather wise. The tournament was held on June 10th this year. For some reason, bad weather has affected this tourney on several years but not this year. The water level was a bit high and a cold front had come in but there was still eighteen shad landed. Joe Tilley from the Saint John area won first place with a combined two fish total of 5.6 lbs. His young son Rowan also won the perch category. Joe also won the lunker shad category for the heaviest shad entered at 3.2 lbs. Congratulations to Joe and his son, as well as long time  tourney organizers Sam Daigle and Ralph Goodwin for a job well done! This is a great tournament that aims to spread interest in shad fishing on Salmon River and the comradery  of fishing in general. This is a photo of a shad in the net. 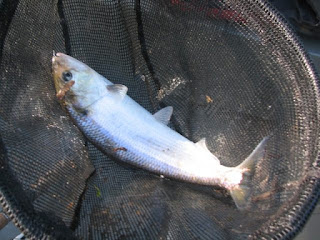 This species of fish is largely overlooked by local anglers because most fishermen are pursuing trout or salmon or one of the many other game fish available to anglers in our area in the month of June. This month is a magic one for fishing and it's really hard to decide what species to fish. Hence, this months heading. I like to think if you have to have a problem, this is a good one to have! Timing is crucial for most species and if you want good success, fishermen should try to time their outings for the peak of the run,whatever it may be. For example, the shad are starting back out of the river now so the peak time to fish them would be during the first two weeks of the month. Anglers should do their research and time their outings accordingly. Try to give yourself a 3-5 day window to avoid weather events that can affect success rates. Another thing to keep in mind is the kind of weather that has occurred that spring. A late spring such as the one this year can sometimes delay peak times as long as two weeks. This is what happened with the striper run and spawning frenzy in Red Bank on the Miramichi River this spring. I didn't get over there until the middle of  this month but my fishing partner and I still managed to hook a dozen or so. We kept three for the table and the fish and chips we made was delicious. 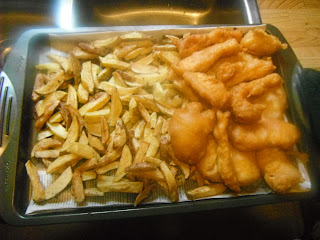 Donna A. and I fished with Norman Ward, long time resident and guide in Red Bank on the Northwest Miramichi River. Norm knows his territory well and is a super guide for stripers on the NWM river. He is on the water nearly every day of the spring season and knows where the stripers are and what they are taking at any given time. When we got on the fish, we started getting hits at regular intervals. I broke off a nice one using a cheap steel leader. I knew better because I didn't like the look of it when I put it on. I  did redeem myself shortly after that by landing a keeper sized bass. 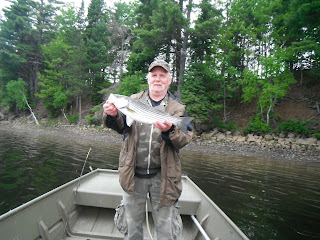 Norman was getting lots of hits too but the first fish he landed was the smallest of the nite. We all had a good chuckle when I asked him to pose with his fish. He's caught lots of stripers that would eat that one in a single bite! 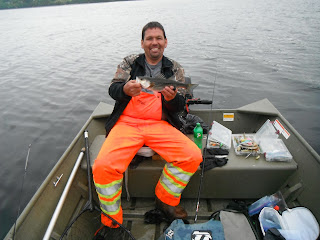 After fishing for a while longer I hooked and released a few before keeping another one. 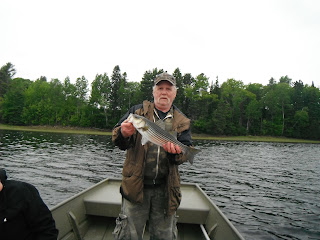 Donna had never caught a striped bass and Norman and I were both hoping she would land her first one that nite. She lost a nice one at the boat but finally landed her first and the biggest of the evening. 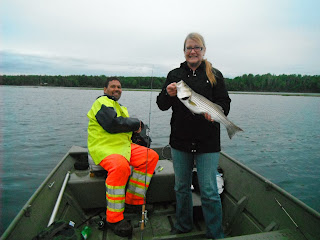 It was a great evening of fishing even though it was post spawn and the fish were on their way out. Norman did a great job finding the fish and even provided some proven lures for us to use. We will be fishing again next month with Norm in Red Bank for salmon. Watch for that post next month.
The sea trout fishing has been spotty because of the runs not arriving at their usual time this year. Fishermen are catching some nice regular river trout but many were either too early or two late. This next photo shows a young lad from Minto with a 19.5 inch trout that he caught in the Newcastle Stream. Right place. Right time. If you look at the fish closely, you will notice it's light colouration. This is indicative of a run trout. My best trout from that stream was 15.5 inches. I was around twelve years old and I caught that trout on a fly rod using a number 6 grizzly king. For years, I would hit the run and fill my basket with nice silver 10-14 inch run trout. It's very nice to see this beautiful stream once again producing quality trout. This next photo shows a 15 inch trout a buddy of mine got this month. This one came from one of the small tributaries that runs into Salmon River. 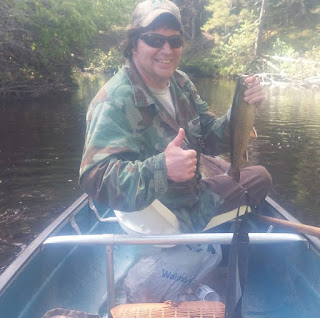 We have some great fishing opportunities in our area. The resource isn't pressured too much and opportunities abound. We do full and half days on Salmon River during the summer months fishing for a variety of species. Shore lunch is provided.

The white perch run is over and we managed to get a couple of feeds right off of my shore. You just can't beat white perch fillets and home fries. Delicious! Here is a photo  from a few years ago of my son Curtis with a white perch he got while fishing with the neighbourhood dog. Howie is still alive and well but he doesn't travel as much now. 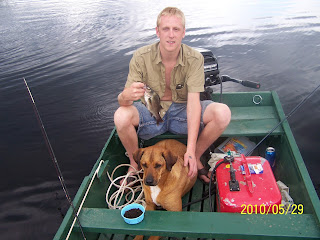 This is a male white perch. The females are many times twice as big as that one my son is holding. Compare that one to these ones that were taken off of my shore on Salmon River. 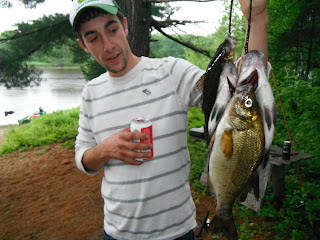 Bright salmon are starting to enter the system and there are reports of fish being seen and hooked from Boistown to Blackville but no big runs yet. I will be in Doaktown this week-end and Red Bank next week so I'm hoping to run into a few fish. More on that next month. This photo shows a beautiful salmon I landed in the third week of June.This is the earliest salmon I have landed but many are caught earlier, especially on the Northwest Miramichi. 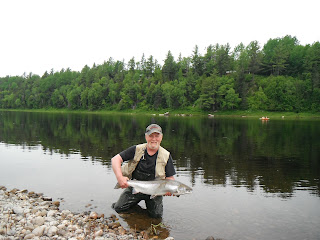 The spring bear season has just ended and there were some very nice bears taken again this year. There were a few over 400 lbs and that is the number generally accepted as monster category. Social media sites showed photos of some really nice bears taken from all parts of New Brunswick but the kill numbers seem to favour the northern half of the province. It could be that there is more hunting pressure in the northern zones that results in higher kill numbers in those zones.We hunt zones 13,17 and 18 exclusively and have baits in all three zones. Ken and I still have tags available for zone 17 which is a large, lightly hunted zone. We have the bears and some really nice ones in the mix. We have cameras on all our baits so we know who the regular visitors are but there are sometimes unexpected ones show up. Many times these bears are bigger boars who cover larger territories. This is always a nice surprise when checking photos or, even better,actually sitting a bait.
Ken and I are looking for bear hunters for this fall. We have a super deal available for any non-resident hunters who would like to come to our area and take a bear in the big woods. Any hunter who wants to hunt both deer and bear can book the 3rd week in October where the two seasons overlap. Our friend from Germany,Nils and his wife Elle, did just that and had a great hunt and stay at the lodge last fall. Please refer to previous posts for  more on that hunt and other information on hunting with Ken and I. This is a photo of a bear that Jamie killed this spring off of one of Kenny's baits in zone 18. I talked a little about this bear in my last post. He was a little too brazen and he had to be taken out to continue baiting that site. 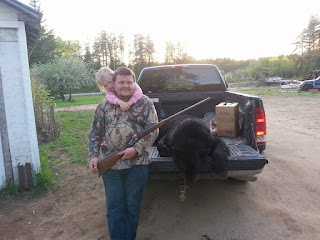 I want to invite people to contact me for information on guided trips with us to the beautiful Grand Lake area of New Brunswick. Ken and I will do everything we can to make your stay a memorable one!

Until next time this is Dale Bauer saying " Happy Trails to You......Until we Meet Again!"