With February being a short month,most sportsmen are looking forward to the first signs of spring. In our part of the world,we usually see a change in the weather around the middle of March when longer days and temperatures above freezing starts to melt the snow pack and the ice along the rivers and streams. Although we are still about three weeks away from that time frame,we have already had a few days of spring like weather heralding better weather to come. But there is a down side to this warmer weather because although it may be melting in the daylight hours,at night the temperature usually drops below freezing and this causes a crust to form when we have a year such as this year with a lot of snow. This is the time when our deer herd suffers the worst,floundering through deep snow and tearing themselves up on the crust. At the same time,Mr.coyote, who had been having the same difficulty in getting around while foraging for food,is now able to travel freely on the crust at the same time as our poor deer are breaking through. This is the killing time for our coy-wolves. The deer are at their mercy and they will pursue them and kill them in their yards or wherever they can catch them. This year will be especially hard on the deer because of the deep snow and lack of cover on our crown lands. The deer are already in a weakened state and it doesn't take long for a pack of coyotes to wear them down and literally eat them alive.I was hoping the price of fur would be good this year because the only way to exercise any kind of control over these killers is by trapping,more specifically snaring. A snare works 24/7 and that's what it takes to reduce their numbers to a tolerable level. Coyotes are just too wily to effectively reduce their numbers by hunting. Our terrain is too thick to be conducive to calling and they like to come to a bait at night when it isn't legal to hunt them. I have to give credit to the game managers in Nova Scotia and Saskatchewan for imposing a bounty on coyotes this year. With the price of their pelts being so low,at least the bounty will provide a bit of monetary incentive to hunters and trappers to target this destructive species. What really upsets me is when the DNR spokespeople say that we can't eliminate coyotes by using a bounty.Who says we want to eliminate them? We all know that isn't possible and that's not what most sportsmen would want anyway. The goal should be to reduce their numbers so they don't have such an impact on our deer herd by their predation. This should be what our game managers are striving for instead of giving the public a smoke and mirrors type answer to a very serious problem.
Ken and Dallas have been out fishing the hard water on Grand Lake in several locations with varying degrees of success. The boys have their ice huts set up at Cox's Point and at Bartons Wharf and have been catching some very nice burbot and pickerel using cut bait and live minnows. Although live minnows are a great bait for either of these species,Ken says the pickerel are giving them some grief by stealing the bait. This can be quite frustrating because it's hard to get minnows this time of the year and even harder to keep them alive and active. To combat this situation,Ken and Dal have switched over to using mainly cut bait because both of these species will readily take this type of bait without the hassle of constantly re-baiting. A good size burbot on Grand Lake will run between twenty- four and thirty inches and weigh in between four and six lbs. A trophy sized burbot will run up to ten or twelve lbs. and there are enough of them around to keep things interesting. The average size of the pickerel we catch is between eighteen and twenty inches,with the occasional twenty-four incher hooked. The following photo shows a few nice burbot up to thirty inches and an average sized pickerel that Ken and Dallas caught last week off of Cox's Point while fishing from one of their shacks. 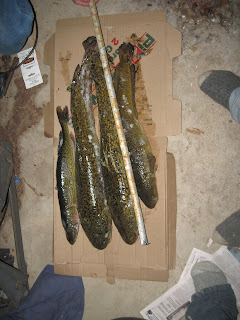 On February 12 the village of Minto held their annual seniors and childrens ice fishing day at the Keyhole on Grand Lake. This event is always well attended and this year was no exception with about one hundred people participating including sixty-two  children registered. The Hargrove clan was well represented,with three generations in attendance! Although the Hargroves weren't in the winners circle,they managed to land a few pickerel around eighteen inches. Ol' Wes received a plaque for the oldest fisherman in attendance and I must congratulate all the hardy participants who braved some brutally cold weather for the three hour tournament. I know that both young and old alike enjoyed the hot-dogs and hot chocolate that was served up by the organizers. Young Kayla Hunter was the big winner with a twenty-two inch pickerel. Another large pickerel tournament was held this past week-end at French Lake and Indian Lake which are part of the Grand Lake system. This tournament is always well attended with sports coming from all points of the province to try and catch some of the large pickerel that inhabit these lakes. The winner is determined by adding the length of your two largest pickerel,which can be upgraded throughout the day but all registered fish must be returned live to the water.This is a good idea because it encourages live release of these great sport fish. I don't have any details on the tourney winners but I will try to include some information in next months blog post. Budweiser beer is one of the large sponsors of this tournament and they have some very good prizes for the lucky winners.
I continue to pick up some nice vintage items in my travels and one of the things I found recently was a nice carving from the Chatam area on the Miramichi River. At first I thought this carving was a beaver but upon closer inspection I came to the conclusion it was an otter. Regardless,I think it is a very nice piece of folk art and was happy to find it and add it to my large collection of vintage items. The following photos show the otter and the artist information on the bottom of the piece. 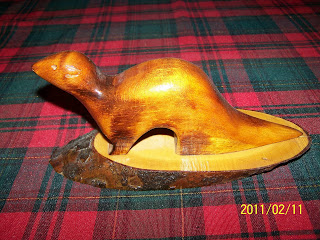 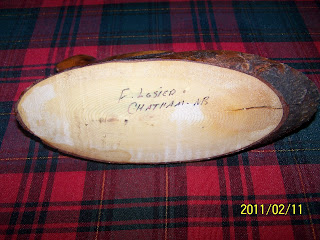 The following photo shows a decorative tile depicting a pair of red-breasted mergansers taken from a John James Audubon print. Although this tile was made in England,it has a stamp saying it was decorated in Canada. 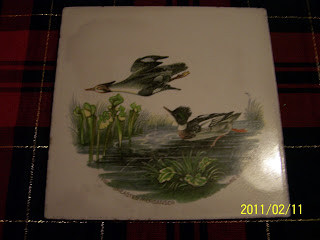 The next photo is of a couple of souvenir ashtrays that I picked up at a local flea market.They seem to be made from a copper alloy and depict a large stag and the New Brunswick coat of arms done in epoxy. 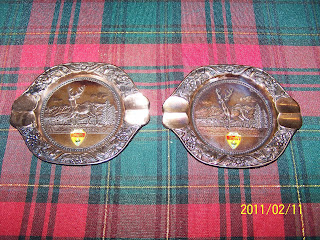 I would date all of the items I have include in this post as being from the Fifties or Sixties but since they are not dated I may be wrong. If any of my readers can provide more information regarding their date of manufacture,please feel free to forward any information to the e-mail for my web site.

Ken and I provide trips by the day or week in our area for whatever species are in season,so don't hesitate to call or e-mail me if you are interested in an adventure in the beautiful Grand Lake area.So until next time,Happy Trails to you.....Until we meet again!
at February 20, 2011 No comments: